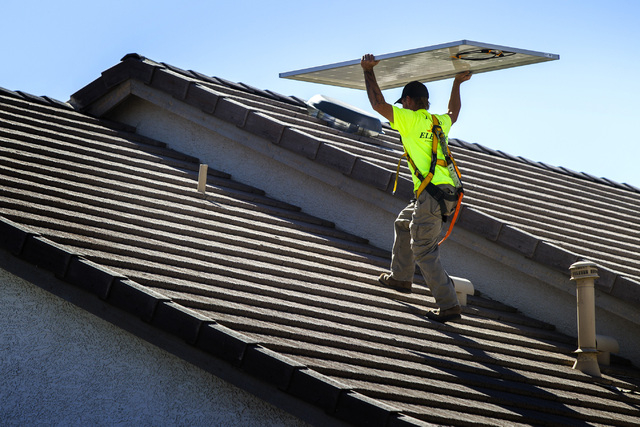 Jacy Sparkman with Robco Electric carries a solar panel at a home in northwest Las Vegas on Friday March 13, 2015. The company estimated that the 17 panel 4.675 KWDC solar project will save this homeowner about 80 percent a month in their energy bill. (Jeff Scheid/Las Vegas Review-Journal)

CARSON CITY — An NV Energy official said this week that rooftop-solar companies can continue to operate in Nevada without net metering, a program that allows homeowners to receive a credit from the utility for any excess electricity they generate.

“There will certainly be political consequences for a lot of people if that happens,” said Bryan Miller, vice president of public policy and power markets for San Francisco-based Sunrun Inc.

The 3 percent cap could be hit by the first quarter of 2016.

NV Energy has about 2,455 net metering customers with 35.8 megawatts installed in Southern Nevada. There are about 3,000 such customers statewide.

Miller said net metering is essential. He said the industry is pushing Gov. Brian Sandoval and lawmakers to raise the 3 percent cap, approved in 2013, to at least 6 percent.

A bill seeking to raise the cap to 10 percent was introduced by Sen. Patricia Farley, R-Las Vegas, but later amended to remove the issue from the measure.

Sandoval said he and his staff are meeting with solar and utility officials to get a clear picture of the issue before taking a position.

Stacey Kusters, vice president of renewable energy and origination for Nevada Power, which is part of NV Energy, said the cost of rooftop solar installations has dropped to where the current subsidy through net metering may no longer be needed. If a homeowner decides to install rooftop solar without net metering, they will get the benefit of a lower bill but without a subsidy, Kuster said.

This creates a subsidy for net metering customers at a cost of about $8 million to $10 million for each percent that must then be covered by all residential ratepayers, Kusters said.

“We are obligated to protect our customers, whether they be residential or commercial.”

But Miller said NV Energy officials are not telling the truth.

“Rooftop solar exists nowhere in the country where there is not net metering. NV knows that and they are completely misrepresenting the situation.”

The utility company is part of Berkshire Hathaway, which intends to eliminate net metering, Miller said.

Farley said Thursday Senate Bill 374 can serve as a legislative vehicle for any solar cap-related changes. She has not taken a position on whether the cap should be raised.

Farley said her goal is for NV Energy and the solar industry to come up with a long-term solution instead of returning to the Legislature every two years.

“My hope is that they figure it out,” she said. “What I said to the governor’s office is this can’t be an every two years we revisit this or rehash this. There has to be a long-term solution.”

Farley said she was first approached about changing her bill by NV Energy lobbyist Pete Ernaut.

Meanwhile, Farley said she understands the Public Utilities Commission is working on another study about net metering but it won’t likely be completed until July after the 120-day legislative session is over. The study is aimed at determining the value of net metering, including the cost to ratepayers if any.

It can cost $15,000 to $20,000 to install rooftop solar, but some companies cover the cost through a kilowatt hour charge to the homeowner.

Net metering began in 1997 as a pilot program involving only 100 customers. At the time, solar power was expensive, but it now competes head-to-head with other sources, Kusters said.

A point of contention is a study commissioned by the Nevada Public Utilities Commission at the request of the 2013 Legislature to look at the cost of rooftop solar on residential customers.

The net metering study by San Francisco-based Energy + Environmental Economics concluded in part: “Overall, we do not estimate a substantial cost shift to nonparticipants due to (net metering) going forward given the current and proposed reforms to the program.”

Whether such systems are a net cost or net benefit to nonparticipating ratepayers depends on several variables, but “in either case should be relatively small,” the consultant’s study said.

Kusters said the study showed net metering provided $36 million in benefits to all NV Energy customers, a finding the utility disputes. That finding was based on solar costing $100 per megawatt hour, but the real cost now is about $60 per megawatt hour, she said. When this lower cost is factored in, costs actually increase to customers to $437 million.

Miller said NV Energy tried to get the study changed by the PUC without success. If it is updated, water savings from rooftop solar should be calculated as well, he said.

“Rooftop solar uses no water; fossil fuels use an enormous amount of water.” 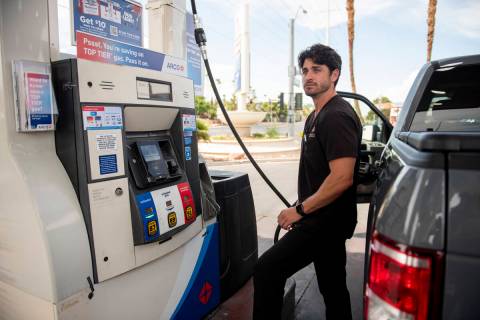 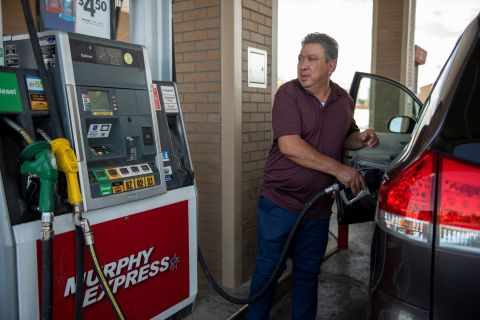 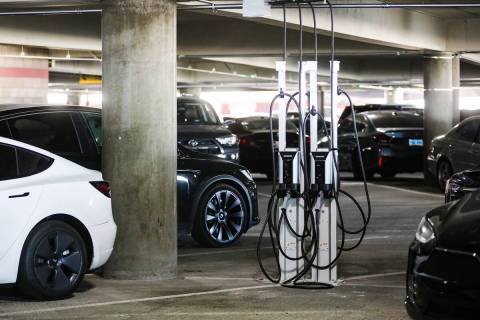