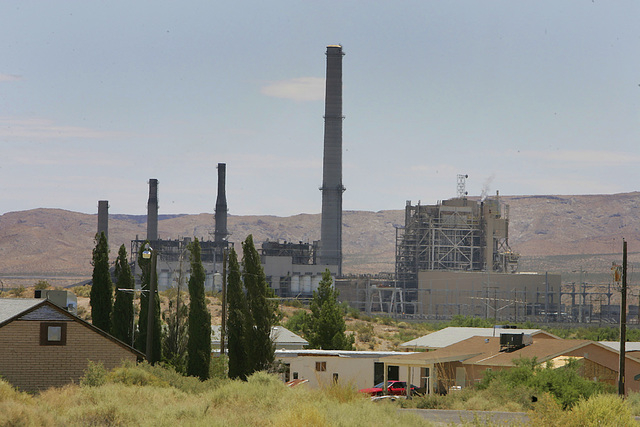 NV Energy south is proposing to close three of its four Reid Gardner coal-fired units generating electricity in Southern Nevada by the end of this year. The Reid Gardner power plant (background) and the Moapa Paiute indian reservation (foreground) are shown in this June 15, 2006, file photo. (Gary Thompson/Las Vegas Review-Journal) 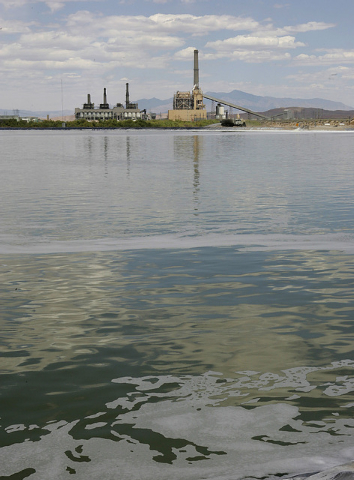 Evaporative ponds are shown at the Reid Gardner power plant in this June 15, 2006, file photo. NV Energy south is proposing to close three of its four Reid Gardner coal-fired units generating electricity in Southern Nevada by the end of this year. (Gary Thompson/Las Vegas Review-Journal) 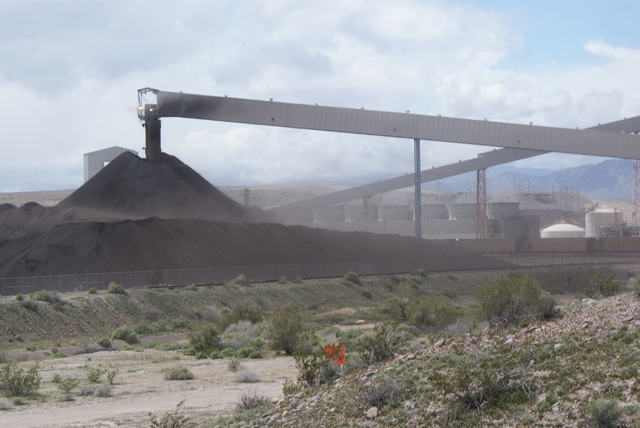 Ash blows from the coal waste pile of the NV Energy Reid Gardner power station, shown in this courtesy photo dated Jan. 5, 2010. NV Energy south is proposing to close three of its four Reid Gardner coal-fired units generating electricity in Southern Nevada by the end of this year. (Photo courtesy of the Moapa Band of Paiutes)

CARSON CITY — NV Energy may close three of its four Reid Gardner coal-fired units generating electricity in Southern Nevada by the end of this year, according to documents filed Thursday with the Public Utilities Commission.

The utility plans to completely end its reliance on coal-fire electrical generation by 2019.

The capacity will be replaced with the purchase of two existing gas-generated plants in North Las Vegas that can produce up to 496 megawatts of electricity and a new 200 megawatt solar project that will be built on the Moapa Band of Paiutes reservation if the PUC agrees within the next 180 days.

The plan is a result of Senate Bill 123 passed by the 2013 Nevada Legislature, which directed the utility to move away from coal-fired electrical generation to alternative forms of energy.

Also proposed is a 15-megawatt solar project at Nellis Air Force Base that will be acquired by the company.

NV Energy President Paul Caudill said the changes to the company’s energy mix are not expected to have a significant effect on rates paid by Southern Nevada customers.

“Our company’s strategy is to minimize rate increases for our customers,” he said. “So we’re going to minimize the impacts of these decisions to the extent we can.”

Two of the proposed acquisitions are potentially eligible for an Investment Tax Credit, further reducing the cost to ratepayers.

COST TO GET REVIEW

The commission will review the costs associated with construction to make sure they are reasonable. If the company makes decisions that lead to unreasonable costs the commission has the power to disallow them.

The fourth coal-fired unit at the Reid Gardner plant near Moapa is scheduled to close in 2017, and the utility will end its ownership interest in the Navajo Generating Station near Page, Ariz., by 2019. In all, 812 megawatts of coal-fired generation will be retired or eliminated under the plan.

Of the 73 employees working at Reid Gardner, half will be needed to operate Unit 4 and the other half will work on decommissioning and remediating issues at the facility over the next two years.

The $438 million Moapa Solar Energy Center is ready to begin construction by the renewable energy firm Res Americas as soon as the PUC signs off on the utility’s plans, Caudill said. When completed in October 2016, NV Energy will acquire the facility.

The two gas plants, the LV Cogen Unit 2 and Sun-Peak Generating Unit, will cost $147 million to acquire. The total capacity replacement costs are $585 million. The cost of the Nellis project is listed separately at a cost of $55 million.

By contrast, the estimated cost of building a natural gas-fired 576-megawatt unit is at least $711 million and would not be eligible for the federal tax credit, the documents said. The tax credit equals 30 percent of eligible expenditures.

“When combined with the two gas acquisitions, this suite of projects is very cost competitive for our customers,” Caudill said.

The Moapa solar project will create as many as 300 highly paid construction jobs with another 100 ancillary positions, providing an economic development component to the requirements of the legislation. The construction of the Nellis project will also help the local economy.

A report by the Las Vegas firm Applied Analysis has estimated the Moapa solar plant should generate up to $181 million in benefits to Nevada.

Tony Sanchez, senior vice president of government and community strategy for NV Energy, said there is the expectation of increased operating costs for the utility if the coal-fired plants were not retired because of pending regulations from the U.S. Environmental Protection Agency.

“Costs are going up,” he said. “And what this is a balanced approach to dealing with that threat.”

Last month, a contingent of Nevada clean energy activists testified before the Legislature’s Energy Committee that more should be done in the area of energy efficiency besides eliminating coal-fired plants. Speakers said that energy efficiency improvements would not only reduce Nevada’s energy consumption and greenhouse gas emissions, but would spur economic development.

Even with the closure of the four Reid Gardner plants, the facility will need to be dismantled over the next several years.

NV Energy faces a federal lawsuit filed by the Sierra Club and Moapa Paiutes to clean up contaminated land and water surrounding the plant.

Also included in the documents are requests for proposals for renewable energy in three 100-megawatt bundles, starting this year through 2016. Companies submitting proposals will come up with the alternative energy sources to comply with the requests.

The company plans to build the 15- megawatt solar project at Nellis Air Force Base as the first of up to 50 megawatts of additional solar energy production.

Finally, NV Energy wants to go through the permitting process for 4,000 acres near the Henry Allen Generating Station in North Las Vegas for the long-term potential development of 350 to 500 megawatts of additional solar power.