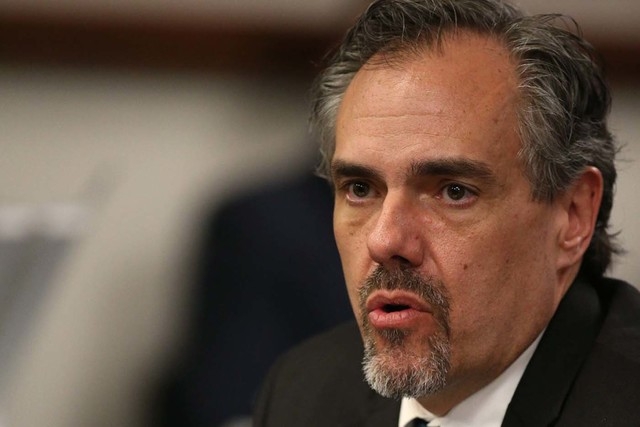 CARSON CITY — A top aide to Gov. Brian Sandoval told an energy task force on Tuesday that “rightly or wrongly” Nevada’s clean energy reputation has been damaged over the fallout from the recent regulatory decision affecting the rooftop solar industry.

Sandoval has a strong commitment to clean renewable energy and he would like advice from the task force on how to demonstrate that commitment to world markets, Erquiaga said.

In an interview after his comments, Erquiaga said several large rooftop solar companies engaged in a major publicity campaign opposing the proposed changes to the net metering program, including misinformation that has now raised concerns from some energy companies contacting state economic development officials about opportunities in Nevada.

“This energy task force can help right that ship,” he said. “This administration supports clean and renewable energy and energy efficiency. One rate case does not make a policy decision for the entire state.”

Sandoval did not challenge the plan after getting assurances that the new standards will be met in Nevada without any difficulty, but Nevada Attorney General Adam Laxalt recently joined in the lawsuit against the standards in a friend of the court brief.

Erquiaga told the task force that another charge is to come up with a proposal that could be taken to the Nevada Legislature in 2017 to address the issue of rooftop solar customers who installed systems in 2015 or earlier but who were brought in under the new, less favorable rates by the Public Utilities Commission decision.

“We believe there is a legislative solution needed there,” he said.

The task force includes representatives of the energy industry in Nevada, as well as state lawmakers and state agency officials. Any recommendations need to be finalized by Sept. 30 so they can be included in Sandoval’s legislative agenda for the 2017 session.

Rooftop solar customers and industry representatives testified at the meeting that the net metering decision made by the PUC has destroyed the industry in Nevada. Net metering allows customers to receive a credit for the excess energy they generate from their systems.

The new rates, which will be phased in over 12 years, reduce the credit for excess generation and imposes larger fixed monthly fees. It covers all rooftop solar customers no matter when they installed their systems.

A coalition of rooftop solar companies have challenged the PUC decision in Carson City District Court.