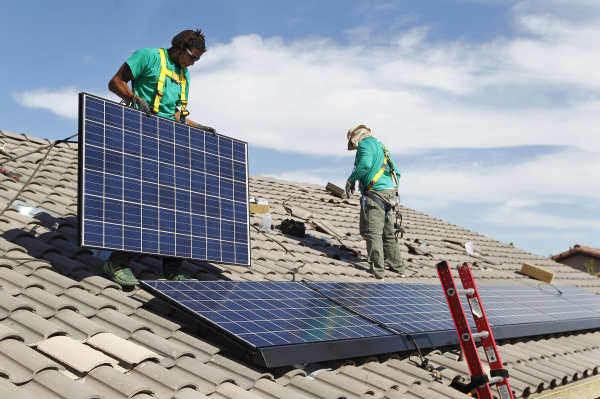 “The matter is larger than just one subset of residential customers getting a benefit that other do not,” said the filing from the Bureau of Consumer Protection. “This is a matter of integrity and honor that will severely damage the reputation of Nevada’s government and its ability to persuade customers to engage in programs in the future, if the perception is created that the commission will not honor or recognize deals prior commissions or legislatures once offered to encourage people to participate in programs that in many cases cost them thousands of dollars out of their own pockets.”

The request for reconsideration comes after the Public Utilities Commission on Dec. 22 approved a new rate structure for rooftop-solar customers that imposes an increase in the fixed monthly service charge and a lower credit for excess electricity generated from their systems.

The PUC on Wednesday will decide whether to stay the new rate while the issues raised on reconsideration are evaluated.

Hundreds of rooftop solar customers have objected to being subjected to the new rate, questioning how the rules could be changed after they spent $20,000 to $40,000 to install their systems based on the original net metering tariff.

Net metering customers of Nevada Power, part of NV Energy, have seen their monthly service charge climb to $17.90 from $12.75 under the new tariff. The monthly service charge will continue to ratchet up, reaching a rate of $38.51 by Jan. 1, 2020. Credits for excess generation from rooftop solar systems also will decline over the next five years.

The rooftop solar rate review was mandated by the Nevada Legislature, which passed Senate Bill 374 in the 2015 session. The measure sent the issue to the PUC for review rather than raise the net metering cap set at 3 percent as sought by rooftop solar companies.

The impetus for the review was the view held by some that net metering customers, who get a credit for the excess electricity they generate, were being subsidized by nonsolar ratepayers.

The request for reconsideration also says that the Bureau of Consumer Protection originally proposed holding off on any major changes to the net metering rate until the next general rate case review in 2017.

Their original proposal suggested a 22 percent reduction in the credit to net metering customers until the issue could be considered in a general rate case.

The filing says that such a decision would satisfy concerns over a cost shift to nonsolar ratepayers “without killing the solar industry at the same time” and would recognize the investment in rooftop solar directed by the Nevada Legislature and the PUC “to establish a vibrant rooftop solar industry in Nevada.”

A second request for reconsideration is expected from The Alliance for Solar Choice, a coalition of rooftop solar companies.

The new rooftop-solar rates are in two filings for Nevada Power, serving Southern Nevada customers of NV Energy, and Sierra Pacific in the north.

Critics of the new rate argue it is to benefit NV Energy, part of Berkshire Hathaway and its CEO Warren Buffett.

But filings with the PUC show that any new revenue from the change would go to reducing overall future rate increases for all ratepayers, not to Berkshire Hathaway or its shareholders.

In a statement. NV Energy said: “The new net metering rate structure established by the Public Utilities Commission of Nevada, in keeping with the statutory directive of Senate Bill 374, fairly allocates the costs of providing electric service among all customers. In doing so, it eliminates the net metering cap that limited the number of rooftop solar projects. The new rate structure, which will be phased in over a five year period, results in no additional profit to NV Energy. NV Energy is committed to providing stable, if not lower, rates for all our customers. On January 1, NV Energy lowered rates for the third time in a year and we will continue to seek opportunities to lower our costs and pass those savings on to our customers.”