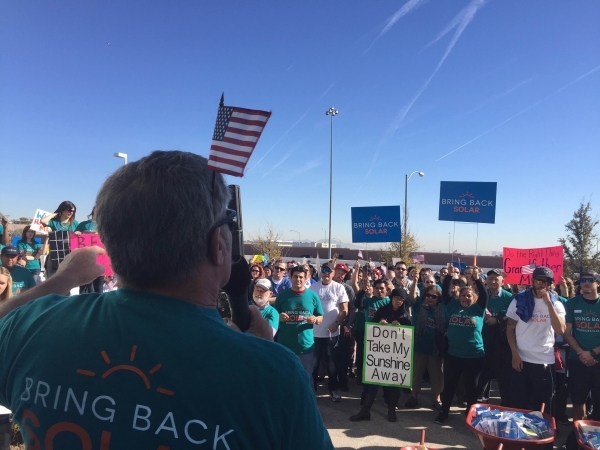 Valley homeowner James Katzen, who has 19 solar panels on his home, speaks out against rate changes in front of the Las Vegas Public Utilities Commission building on Feb. 12, 2016. Alexander S. Corey/Las Vegas Review-Journal

CARSON CITY — State utility regulators on Friday approved a phased-in rate increase for rooftop-solar customers over 12 years, rejecting a recommendation from NV Energy and others to grandfather in existing net metering customers under previous, more favorable rates for 20 years.

The Nevada Public Utilities Commission voted unanimously for the phase in of the higher fixed monthly service charges and reduced credits for excess electricity generated by rooftop-solar users. As a last-minute compromise proposed by Commission Chairman Paul Thomsen, the 12-year phase in was made applicable to all rooftop-solar customers, current and future.

The vote means that a Jan. 1 rate increase that took effect for rooftop-solar customers remains in effect. The monthly charge increased to $17.90 from $12.75. The excess electricity credit was also reduced.

“I think this proposal creates a seamless transition to cost-based rates,” Thomsen said.

The next rate increase for net metering customers will occur on Jan. 1, 2019. Other increases would follow every three years until a subsidy of $16 million a year to rooftop-solar customers from nonsolar customers is eliminated. The phase in for all solar customers under the new order will eliminate two-thirds of a $315 million subsidy until solar customers pay the new, final rates in 2028, Thomsen said.

Commissioners noted that the rates will be revisited and that changes to the solar industry could also affect those considering rooftop-solar systems.

rooftop-solar customers and companies that install the systems rejected the argument that a subsidy exists.

Gov. Brian Sandoval expressed disappointment at the decision, saying it did not go far enough to protect existing rooftop-solar customers.

“While I have respected the Commission and its deliberations by not influencing its process, the PUC did not reach the outcome I had hoped for,” he said. “I remained optimistic that the Commission would find a solution that considered the economic consequences to existing rooftop-solar owners. Today’s decision does not go far enough to protect their interests.”

A rooftop-solar group, the Bring Back Solar Alliance, issued a statement expressing disappointment as well: “With their decision, the PUC has again betrayed the 17,000 Nevada customers who did the right thing and chose to go solar. … We urge the Legislature to call a special session immediately to solve these problems that the PUC has created.”

Many of the state’s 17,000 residential and small business rooftop-solar customers wanted to be grandfathered in under the original net metering rates that were more favorable than the new tariffs. Many participants in the rate review were surprised when the PUC on Dec. 22 approved the new rates for all customers.

rooftop-solar groups criticized the initial proposal that phased in the new rates only for some existing rooftop-solar customers and implemented the higher rates for the industry going forward, saying it would drive the industry and its thousands of jobs out of the state.

Outside the Las Vegas PUC offices, several hundred protesters had gathered by late morning. The sounds of chanting, megaphones, and honking from motorists’ vehicles in support filled the parking lot and nearby streets.

Scores of advocates from the Bring Back Solar campaign unloaded wheelbarrows full of signatures in support of restoring Nevada’s original net metering rates. They said the cards of support now number 55,000.

Among the protesters was 67-year-old James Katzen, a local homeowner who has collected 19 solar panels over the past four years.

The commission, he said, “Wants to take away my choice to generate my own power.”

Casey Klein, 28, a corporate trainer with Solar City, said she has seen many coworkers lose their jobs as a result of the rate increase.

Klein said that even people who don’t use solar panels now should take notice because it could affect their choice in the future.

One of the first people to line up outside the commission offices in Las Vegas to attend the meeting was 70-year-old Bruce Rogol, a partner at local solar company Robco Electric.

Since the new rates took effect, Rogol said he’s had to cut 30 of his 50 employees. He might have had to cut even more, he said, if not for the other electrical services that his company offers such as alarm and home automation.

“It’s like playing poker and then changing the cards after the hand’s been dealt,” said Rogol.

Nevada voters may get to weigh in on the issue at the November general election. Solar groups are planning to gather signatures to put a referendum on the ballot to restore the net metering program to its original rates for all rooftop customers.

The approval of the new rates will now allow for anticipated legal challenges in state district court to go forward. A lawsuit has been filed in Clark County by John Bamforth and Stanley Schone who allege that Nevada Power, part of NV Energy, provided false and/or incomplete information to the PUC on the net metering issue. Another lawsuit has been filed against SolarCity by a Northern Nevada couple alleging the company did not disclose the fact that net metering rates could change when they contracted for a rooftop-solar system in August of last year. Both lawsuits seek class action status.