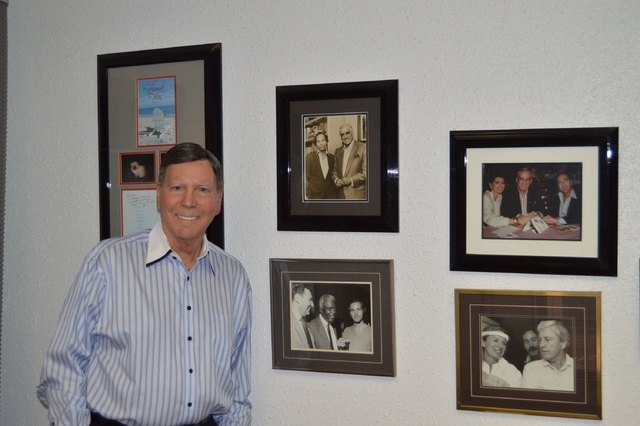 Bruce Merrin came to Las Vegas in 1956, when his father took a job as general manager and executive vice president of the Flamingo Hotel and Casino.

One of the highlights of his childhood set the foundation for his future career. At age 12, his parents arranged for him to be performer Brenda Lee’s date at her 12th birthday party at the Flamingo. Lee was a headliner at the Flamingo and a popular celebrity at the time. It was a memorable experience. On the way home, he told his parents “I want to work in entertainment.”

His parents encouraged him to take journalism classes. He attended UCLA film school, where he was on the Daily Bruin, UCLA’s newspaper.

He credits learning these early writing skills — and the support of his parents — as important life preparation skills.

Q. How did you come up with the business concept for celebrityspeakersentertainment.com?

Michael Landon is amazing; he’s one of the guys who really influenced my life. He became my client in my very first year that I was on my own. So for a young guy to have a PR firm that represented Michael Landon, that was incredible. I was getting him on all the national TV shows.

Johnny Carson, of course, back then, was the No. 1 show. One evening, I had him on the Johnny Carson show and Johnny Carson comes back stage and says to me and Michael: “How would you guys like to have dinner with me in Malibu at my home?” I’m in my young 20s and I’m thinking “My God, I’m invited to Johnny Carson’s home for dinner.”

So we did go to Johnny Carson’s home and Johnny Carson said to me and Michael “Bruce you’re always bringing these interesting guests to me on my show. Would you ever think about having a celebrity entertainment bureau? You have a PR firm, but have you ever thought about having a celebrity bureau?” I’d never really thought about it. Johnny Carson says “Just think about all the people you know.” So, he says “look, you do represent so many well-known people; I think if you had a celebrity bureau you would do really well.” And then he says “I’ll tell you what, I’ll be your first client.” Then Michael Landon says “Well, I’ll be your client.”

So that day, at his (Johnny Carson’s) home, that’s when I decided to start Celebrity Speakers Entertainment.

They are totally different, though they relate to each other. For example — for Bruce Merrin Public Relations, one of our clients is Las Vegas Airlines. It’s an airline that flies from Madrid to Vegas. They bring about 400 passengers once a week. We’re doing public relations (and) publicity for Las Vegas Airlines. The public relations campaigns are more geared toward writing news releases, getting our clients on TV, radio, newspaper, magazine, publicity exposure. So that’s the publicity side.

On the Celebrity Speakers Entertainment side, we book well-known people for big corporations and trade associations, either for speaking engagements or for entertaining corporate groups — for example inbound groups to Vegas. We have dozens of inbound groups that come into Vegas. We frequently book speakers or entertainers for those groups.

We make a commission, on the celebrity speaker side. Public relations, we are paid a retainer fee every month.

Q. How were you able to turn a simple online networking idea into big business? What makes it work?

We’ve been able to build a good brand because we’ve been around for 41 years. That really helps us in our business when people either go to our website or contact us they know that we’ve got a tremendous amount of experience behind us because of what we’ve done. We’re not like new kids on the block. For example, every single past president going back to President Reagan, every single one of them, we have booked for paid speaking engagements. President Ford, we booked him in Mesquite, as an example. We’ve been doing this so long we’re able to present our celebrity bureau as one of the most experienced and elite companies.

Q. Do you have any advice for young new PR reps just starting out in the business?

I’m a big on internships. If they can get paid jobs, God bless them, do it right away. The reason I mention that is over the years we’ve had some interns that started out interning with us that became full-time employees because they were so impressive in the job. The other thing I would definitely say writing skills. I think are so important for the public relations area … The way you write and grab the people’s attention is so important.