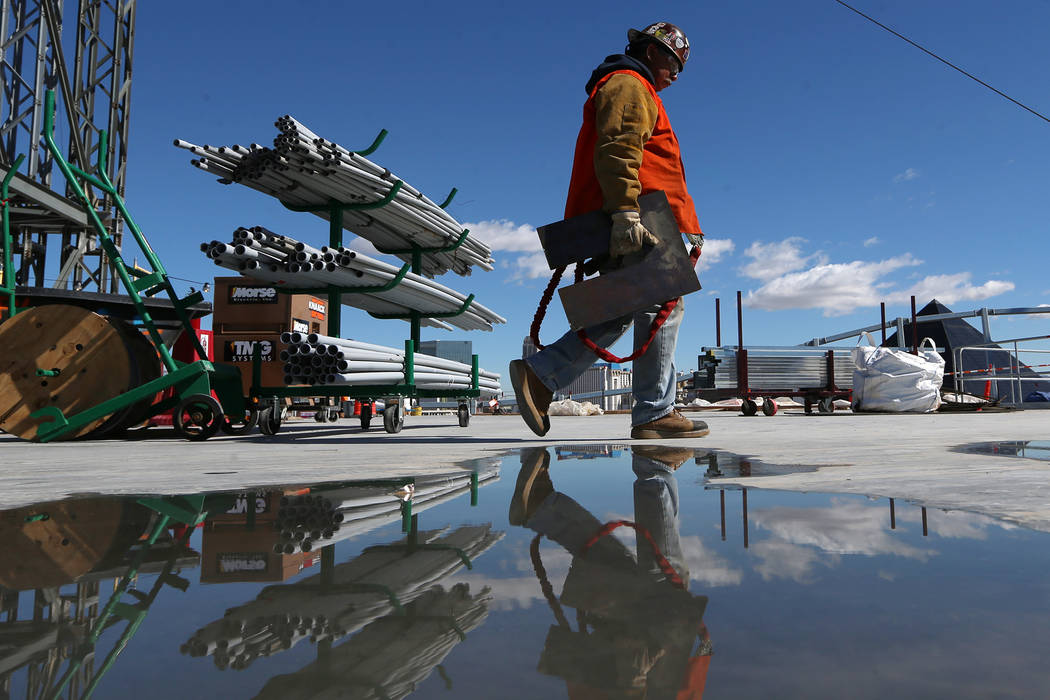 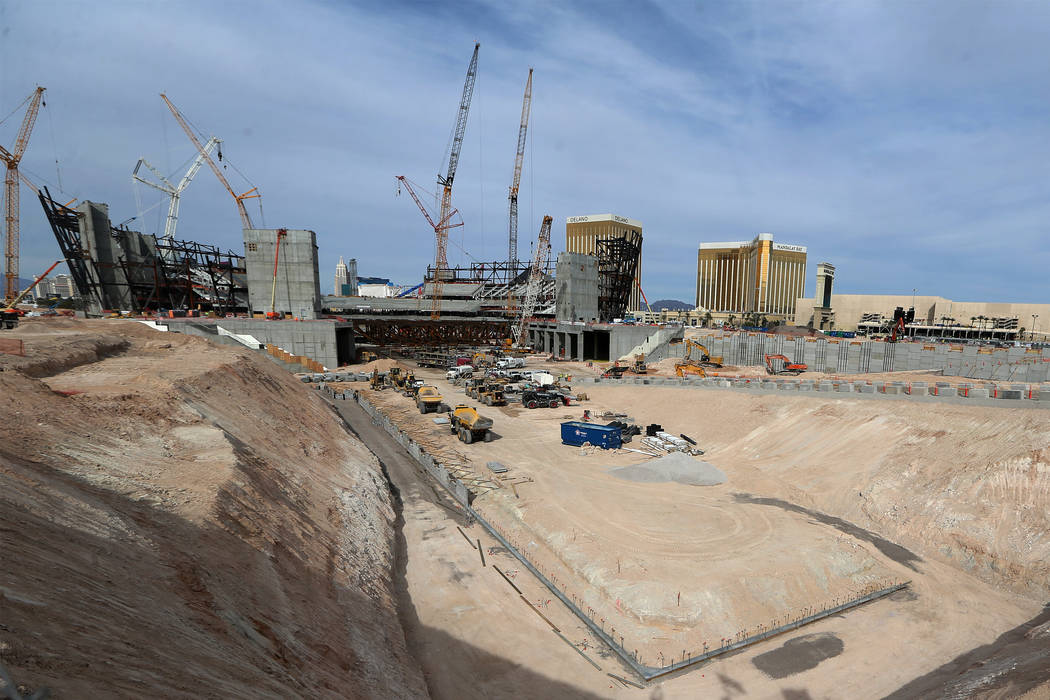 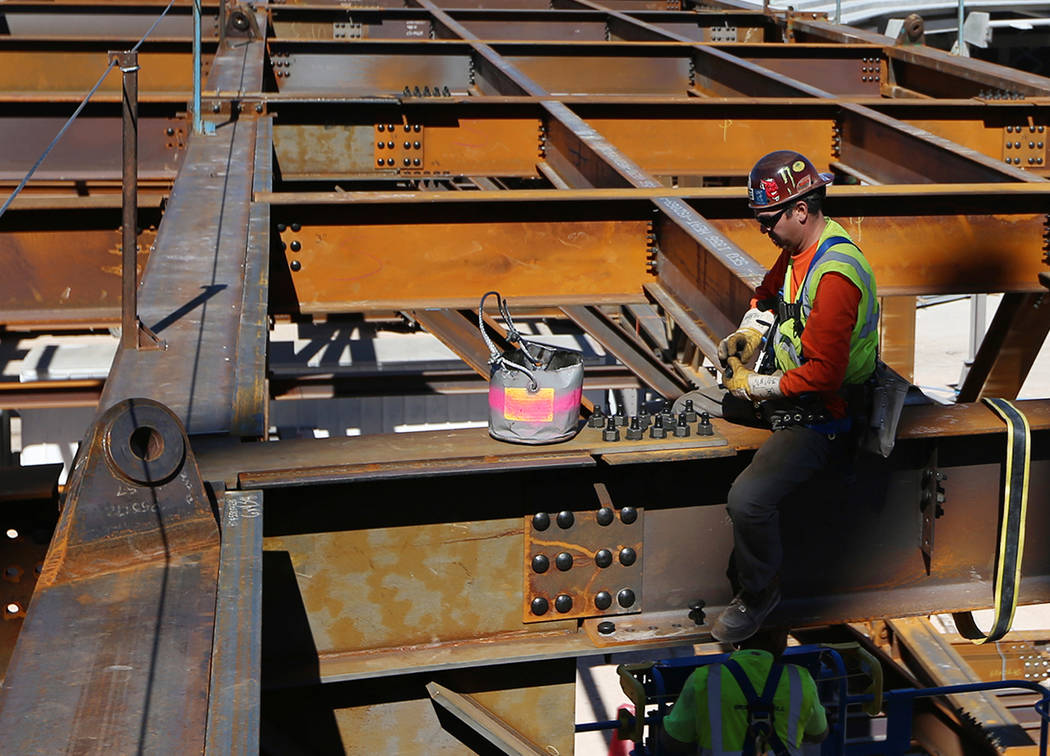 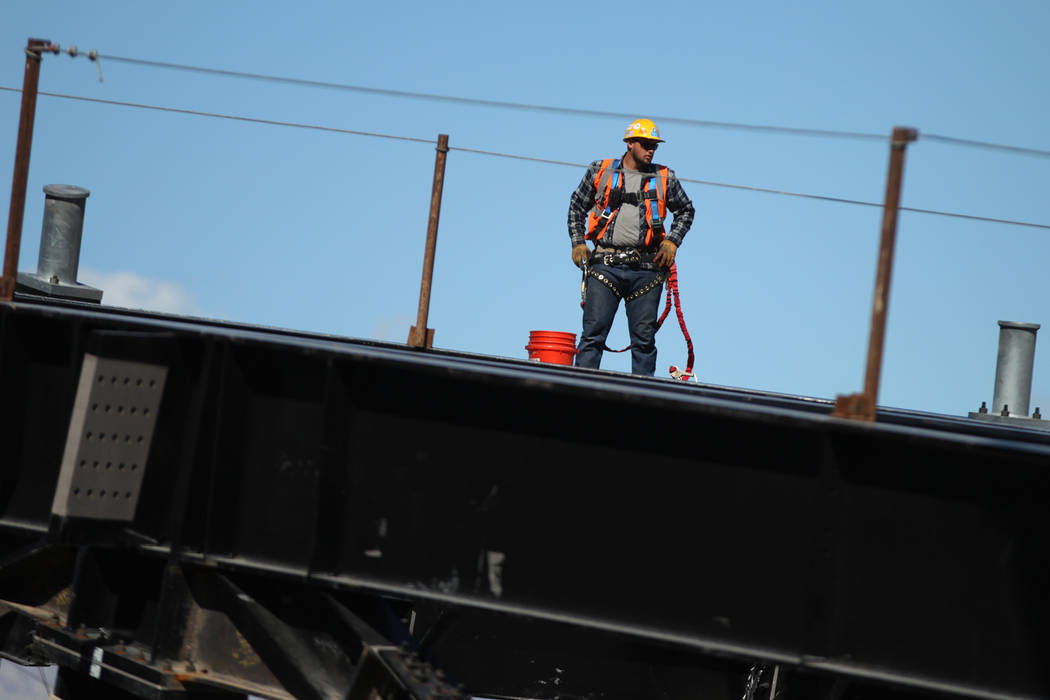 A worker stands on a roof truss that is scheduled to go up in weeks at the Raiders stadium construction site in Las Vegas, Friday, March 22, 2019. Erik Verduzco Las Vegas Review-Journal @Erik_Verduzco

Three economic experts shared their views of what could be in store for Las Vegas in a 90-minute presentation Friday before the Economic Club of Las Vegas at Bali Hai.

Knott’s projection of $50 million-an-acre Strip land is based on what he expects to be heavy demand for limited available property once the 2020-21 boom of new projects begins.

Strip land prices haven’t ventured anywhere close to $30 million an acre since before the Great Recession; they have generally ranged from $2.5 million to $8.8 million an acre. Overall, Strip land sales have been slow, with some parcels laying dormant for years.

Knott anticipates there will be a movement to improve transportation infrastructure, with the possibility of high-speed rail to Southern California and the underground transportation network envisioned by Elon Musk’s The Boring Company.

He expects that if population trends continue their current trajectory, the resort corridor will lengthen to the south and broaden where it can to the east and west with the regentrification of areas close to the Strip.

Housing will be denser, he predicted, and proposals for a reliever airport to McCarran International will resurface.

Between 2000 and 2010, Clark County officials studied the possibility of building a new airport in the Ivanpah Valley south of Las Vegas.

Knott’s view of the future was no less incredible than Szymanski’s proposal to stage the Olympics in Las Vegas someday based on Southern Nevada’s newfound love affair with professional sports.

Szymanski said there aren’t many cities in the world currently capable of hosting the Olympics, but Las Vegas is one of them. With the completion of the $1.8 billion, 65,000-seat stadium in 2020, Szymanski said the city would have at least 20 facilities capable of hosting events. He said an Olympic village would be needed to house 16,000 athletes — and one casino company like Caesars Entertainment could easily do that, leaving plenty of hotel rooms for tourists wanting to attend events.

But Szymanski acknowledged that a Las Vegas Olympics, though economically viable, could be politically unacceptable. He said he would expect the International Olympic Committee to rebuff Las Vegas as a host because of the presence of gambling, a problem the city has faced before with numerous professional sports leagues.

So Szymanski proposed a different option — hosting a own multisport competition without the IOC’s blessing.

“You could even drop the triple jump and bring in esports instead,” he said.

Schwartz, who has analyzed gaming industry and tourism trends as the director of the Center for Gaming Research at UNLV, said resort companies have realized that, even though revenue figures show not every visitor is inclined to gamble, all of them need to eat and want to be entertained.

He expects that trend to continue as resort companies create more experiences, many of them involving outdoor activities, to capture ancillary revenue.