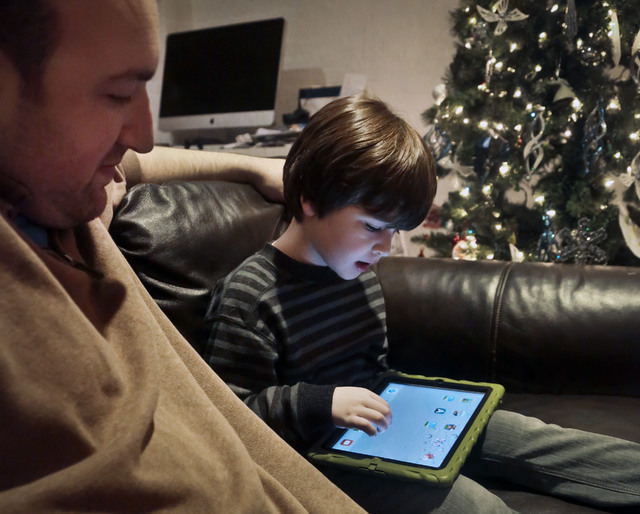 In this Dec. 3, 2013, photo, Adam Cohen watches as his son Marc, 5, uses a tablet at their home in New York. Tablets of all types are expected to rank among the top holiday gifts for children this year, but some experts and advocates question the educational or developmental benefits for youngsters. (AP Photo/Bebeto Matthews) 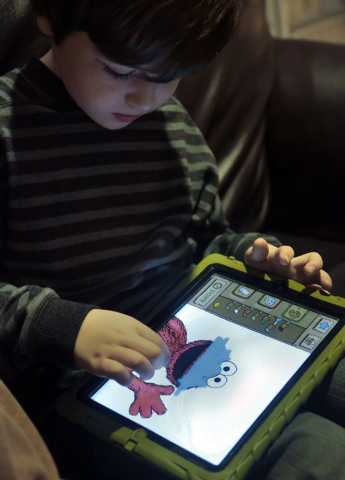 In this Tuesday, Dec. 3, 2013, photo, Marc Cohen, 5, uses a Sesame Street app on his tablet at home in New York. Tablets of all types are expected to rank among the top holiday gifts for children this year, but some experts and advocates question the educational or developmental benefits for youngsters. (AP Photo/Bebeto Matthews)

NEW YORK — Tablet computers are so easy to use that even a 3-year-old can master them.

And that has some pediatricians and other health experts worried.

Since navigating a tablet generally doesn’t require the ability to type or read, children as young as toddlers can quickly learn how to stream movies, scroll through family photos or play simple games.

That ease-of-use makes tablets —and smartphones— popular with busy parents who use them to pacify their kids during car rides, restaurant outings or while they’re at home trying to get dinner on the table. And many feel a little less guilty about it if they think there’s educational value to the apps and games their children use.

The devices are expected to rank among the top holiday gifts for children this year. Gadget makers such as Samsung have introduced tablets specifically designed for kids and many manufacturers of adult tablets now include parental controls. Those products are in addition to the slew of kiddie tablets produced by electronic toy makers such as LeapFrog, Vtech and Toys R Us.

But some experts note there’s no evidence that screen time — whether from a TV or tablet — provides any educational or developmental benefits for babies and toddlers. Yet it takes away from activities that do promote brain development, such as non-electronic toys and adult interaction.

They also say that too much screen time has been linked to behavior problems and delayed social development in older children.

Dr. Dimitri Christakis, a pediatrician at Seattle Children’s Hospital, points out that iPads have only been on the market for a little over three years, which means tablet-related research is still in its infancy.

Christakis says educational games and apps have some value if they engage a child and prompt them to interact with the device, but cautioned that if all children do is watch videos on their tablets, then it’s just like watching TV, which has a limited ability to engage a child.

He also notes that parents need be mindful of whether tablet time is replacing more important activities such as sleeping, reading or interacting with adults. He says that while the American Academy of Pediatrics recommends no more than one to two hours of screen time a day for kids over the age of two, he thinks one hour is plenty.

“The single most important thing for children is time with parents and caregivers,” he says. “Nothing is more important in terms of social development. If time with the tablet comes at the expense of that, that’s not good.”

Dr. Rahil Briggs, a pediatric psychologist at New York’s Montefiore Medical Center, says tablet usage needs to be limited for the youngest of children, because too much screen time can slow language development. And since there’s very little research out there so far, experts still don’t know exactly how much is too much, she says.

For older children, Briggs says too much tablet use can slow social development. She notes that the solitary nature of the activity means that kids aren’t using that time to learn how to make friends or pick up on social cues.

Jill Buban, dean of the School of Education at Post University in Waterbury Conn., says the more children absorb and understand technology before they start school, the more comfortable they’ll feel when they enter a classroom for the first time.

But she says even the best educational apps must be monitored by parents and limited. She recommends no more than 30 minutes of tablet usage at a time in light of the short attention spans of most young kids.

“There’s so much media out there and so much marketing,” she says. “It’s all about smart choices and research, whether it’s an app on a tablet or a TV show.”

Susan Linn, director of the Campaign for a Commercial-Free Childhood, says parents should be wary of any TV show or app that touts educational benefits for babies or toddlers, saying that scientists have yet to prove that there are any.

“Babies and young children are spending huge amounts of time with screen media when really what they need is hands-on creative play, active time and face-to face time with the people that love them,” Linn said.

Linn’s group, known for its allegations against “Baby Einstein” videos that eventually led to consumer refunds, is urging the Federal Trade Commission to examine the marketing practices of certain apps and games geared toward babies.

“The best toys are the ones that just lie there until the child transforms them,” Linn said pointing to blocks and stuffed animals as examples. “If all children do is push a button, that’s not the kind of play that promotes learning.”

Since its debut over 40 years ago, Sesame Street has dealt with questions about the amount of screen time small children should have.

Scott Chambers, Sesame Workshop’s senior vice president for digital content, says the brand, which now includes 45 apps and 160 e-books, has gotten a huge boost from touch screen devices, which are much easier for preschoolers to handle than computer mice. That content can provide children with a much more customized and interactive educational experience than the show could hope to deliver, he says.

“It’s a balancing act, but all we can do is try to provide a good enriching media experience wherever parents and preschoolers may be,” Chambers says.

Chambers notes that some of Sesame’s apps encourage kids to put down their devices, pointing to Sesame’s new “Family Play” app. Instead of having a child interact directly with a phone or tablet, it gives parents ideas for ways to play together.

Adam Cohen, a stay-at-home father of two from New York, says apps have been a key part of his 5-year-old son Marc’s education since he was just a baby.

“He had an iPad at close to 18 months so he was definitely one of those babies swiping away in his stroller,” Cohen says. “Now it’s different, but back then we were a little ostracized. Now he’s reading at close to a second-grade reading level and I credit a lot of that to iPad apps.”

Marc now has his own iPad loaded with mostly educational content and his baby sister Harper, who isn’t yet one-year-old, seems frustrated that she doesn’t have one too, Cohen says.

Still, not every parent is keen on tablets and apps.

Lance Somerfeld, another stay-at-home dad from New York, says he thinks he and his wife are stricter than most parents. They don’t own a tablet and didn’t allow their 5-year-old son Jake to watch TV until he was nearly three. But Somerfeld says he does have an iPhone and lets Jake occasionally play with some of the apps.

“If I have an hour and a choice, I’d really rather spend it reading books with him,” Somerfeld says. “But he’s really engaged by the apps, so you could make the case that there needs to be a balance.”