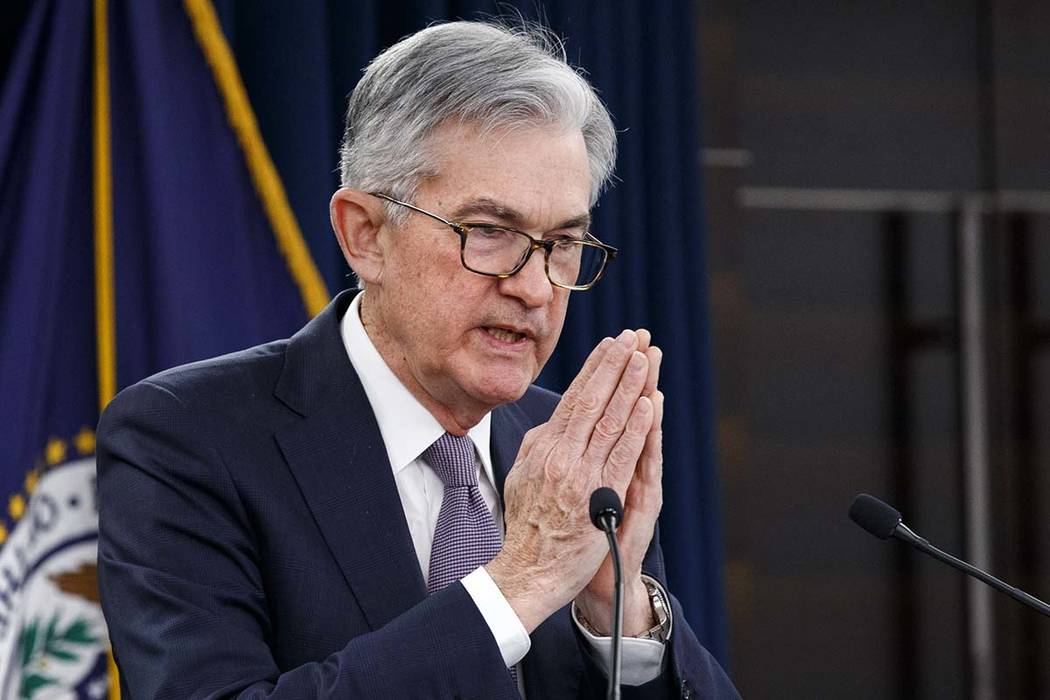 Federal Reserve Chair Jerome Powell gestures while speaking during a news conference after the Federal Open Market Committee meeting, Wednesday, Dec. 11, 2019, in Washington. The Federal Reserve is leaving its benchmark interest rate alone and signaling that it expects to keep low rates unchanged through next year. (AP Photo/Jacquelyn Martin) 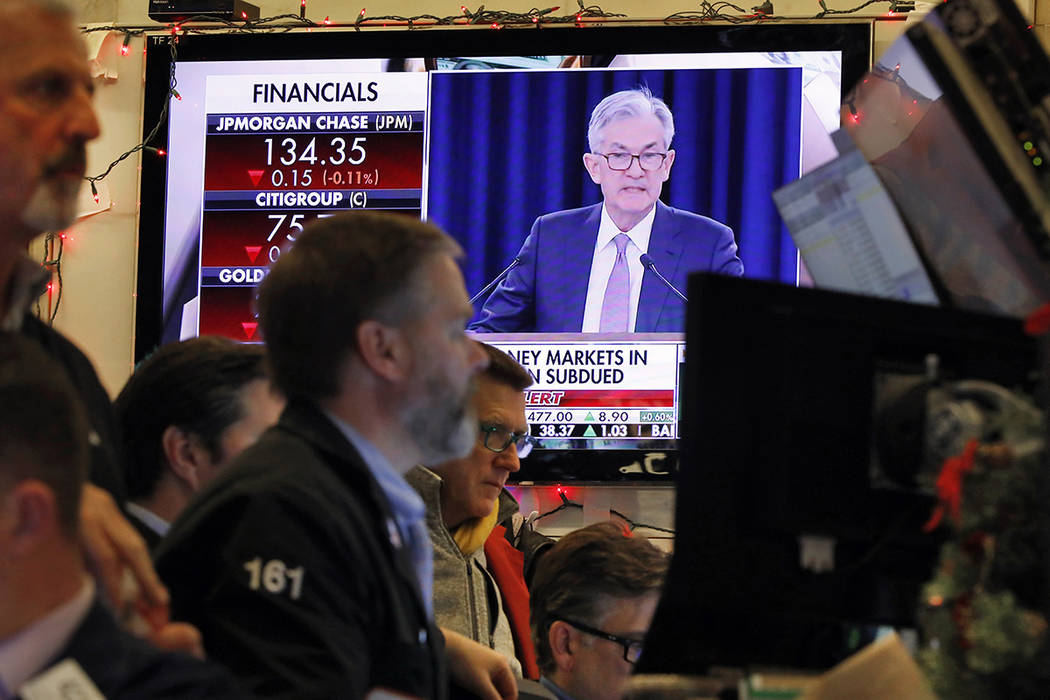 A television screen on the floor of the New York Stock Exchange shows Federal Reserve Board Chair Jerome Powell's Washington news conference, Wednesday, Dec. 11, 2019. The Federal Reserve is leaving its benchmark interest rate alone and signaling that it expects to keep low rates unchanged through next year. (AP Photo/Richard Drew)

WASHINGTON — The Federal Reserve left its benchmark interest rate alone Wednesday and signaled that it expects to keep low rates unchanged through next year.

The Fed’s decision follows three rate cuts earlier this year. It reflects its view that the U.S. economy has so far withstood the U.S.-China trade war and a global slump and remains generally healthy. Its benchmark rate —which influences many consumer and business loans — will remain in a low range of 1.5 percent to 1.75 percent.

In a sign of its confidence about the economy, the Fed’s latest policy statement dropped a phrase it had previously used that referred to “uncertainties” surrounding the economic outlook. That suggests that the Fed may be less worried about the impact of the U.S.-China trade war or overseas developments.

Financial markets moved slightly up soon after the Fed issued its statement.

For now, the Fed appears inclined to leave rates alone through 2020, an election year. But many analysts note that the economy faces risks from the trade conflicts, a global slowdown and a potentially disruptive Brexit and say the Fed may feel compelled to cut rates at least once next year.

Persistently low inflation with very low unemployment has led many Fed officials to conclude that rates can remain lower for much longer than they thought without spurring higher prices. Low rates help consumers and businesses afford to borrow and spend. Still, savers have struggled to find returns outside the stock market that can keep them ahead of inflation.

Speaking at a news conference Wednesday, Chairman Jerome Powell suggested that even with the pace of hiring solid and unemployment low, he thinks the Fed can further strengthen the job market through a low-rate — or “accommodative” — policy.

“Even though we are at 3½ percent unemployment, there is actually more slack out there in a sense,” Powell said. “And the risks of using accommodative monetary policy, our tool, to explore that, are relatively low.”

In updated forecasts the Fed issued Wednesday, no officials penciled in a rate cut in 2020. Instead, four Fed officials said they expected a rate increase next year. The remaining 13 officials projected no change to rates.

At his news conference, Powell made clear that he thinks higher rates are unlikely anytime soon.

“In order to move rates up,” he said, “I would want to see inflation that is persistent, that is significant, before raising rates to address inflation concerns. That is my view.”

Powell has said that this year’s rate cuts have helped lower mortgage rates and spurred growth in home purchases. Auto sales have also remained healthy as more Americans have borrowed to buy cars.

After having raised its benchmark short-term rate four times in 2018, the Fed reversed course this year and cut rates three times to a range of 1.5 percent to 1.75 percent. Powell has portrayed those cuts as mainly “insurance” against a slowdown resulting from weak global growth and President Donald Trump’s prolonged trade war with China.

Powell and other Fed policymakers have made clear that they are no longer worried that a healthy job market will necessarily fuel excessive inflation. Instead, they would like to see inflation reach their 2% target level after running below it for most of the past seven years. Even with unemployment at a 50-year low of 3.5%, the Fed’s preferred inflation gauge showed prices rising by just 1.3% in October compared with a year earlier.

Tame inflation and ultra-low unemployment have led Fed officials to rethink their view of the so-called “neutral rate.” This is the point at which the Fed’s key rate is believed to neither accelerate economic growth nor restrain it. The neutral rate typically shouldn’t change very often or very much. But the Fed’s policymakers estimate that the neutral rate is now 2.5 percent, down from 3 percent as recently as September 2018.

And Fed Vice Chair Richard Clarida suggested last month that full employment — the lowest rate that the Fed thinks the jobless rate can go before it starts escalating inflation — could be as low as 3.6 percent. A year ago, the Fed thought it was 4.4 percent.

At his previous news conference in late October, Powell had set a high bar for a rate hike. Recent economic data has been healthy, providing another reason for the Fed to stay on the sidelines.

On Wednesday, Powell acknowledged that the Fed was caught by surprise when the economy appeared to weaken late last year.

“Toward the end of 2018, there was still a sense that the economy was growing at around 3 percent, and it didn’t,” he said. “I didn’t expect to face the challenges, but I think we did face them, and I’m pleased that we moved to support the economy in the way that we did. I think both the economy and monetary policy right now — I think are in a good place.”

Fed policymakers have been weighing their options to stabilize short-term lending in money markets. In late September, overnight lending markets seized up, and banks and other financial institutions struggled to find short-term loans. This problem briefly lifted the Fed’s benchmark rate out of its target range.

The Fed has also provided additional liquidity through temporary overnight and other short-term loans. Together, the operations have increased the Fed’s balance sheet by nearly $300 billion.

Powell has maintained that the purchases are intended to improve the functioning of the financial system and not to ease borrowing rates. That makes it different, he says, from the Fed’s bond purchases during the Great Recession and its aftermath, when it sought to drive down long-term borrowing rates to stimulate spending and economic growth.