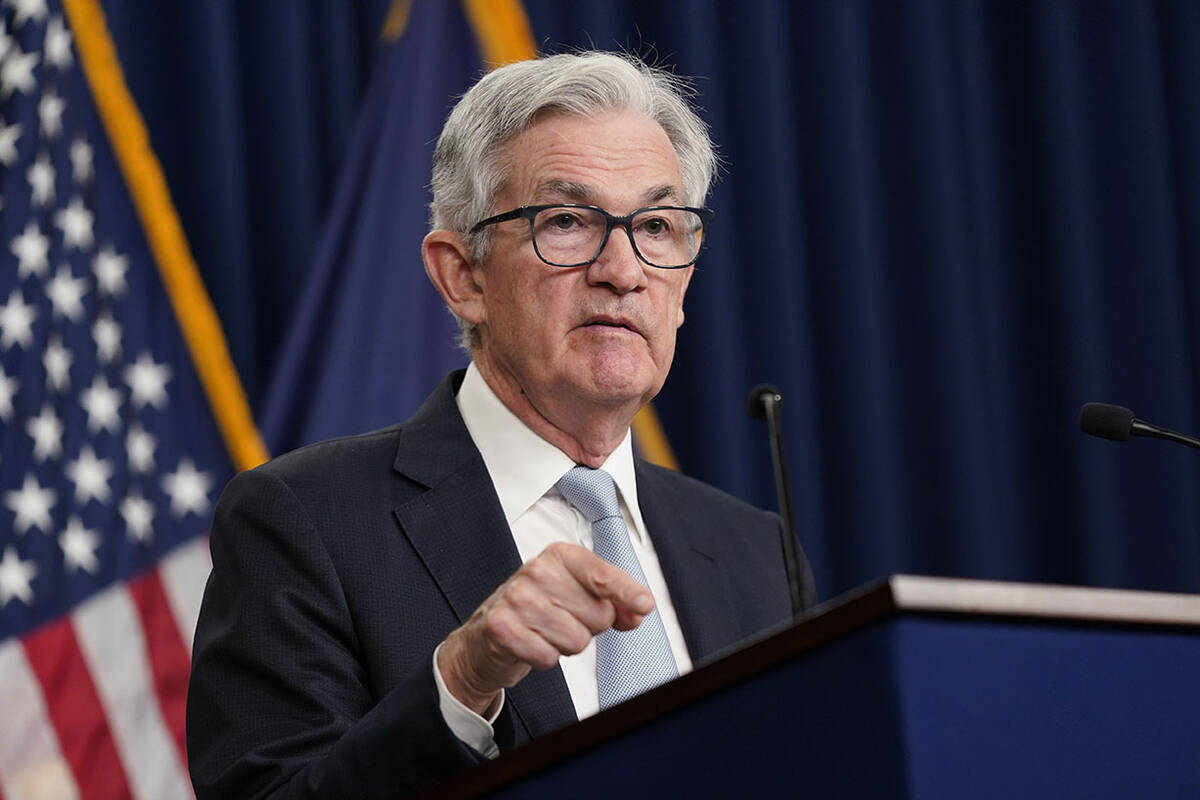 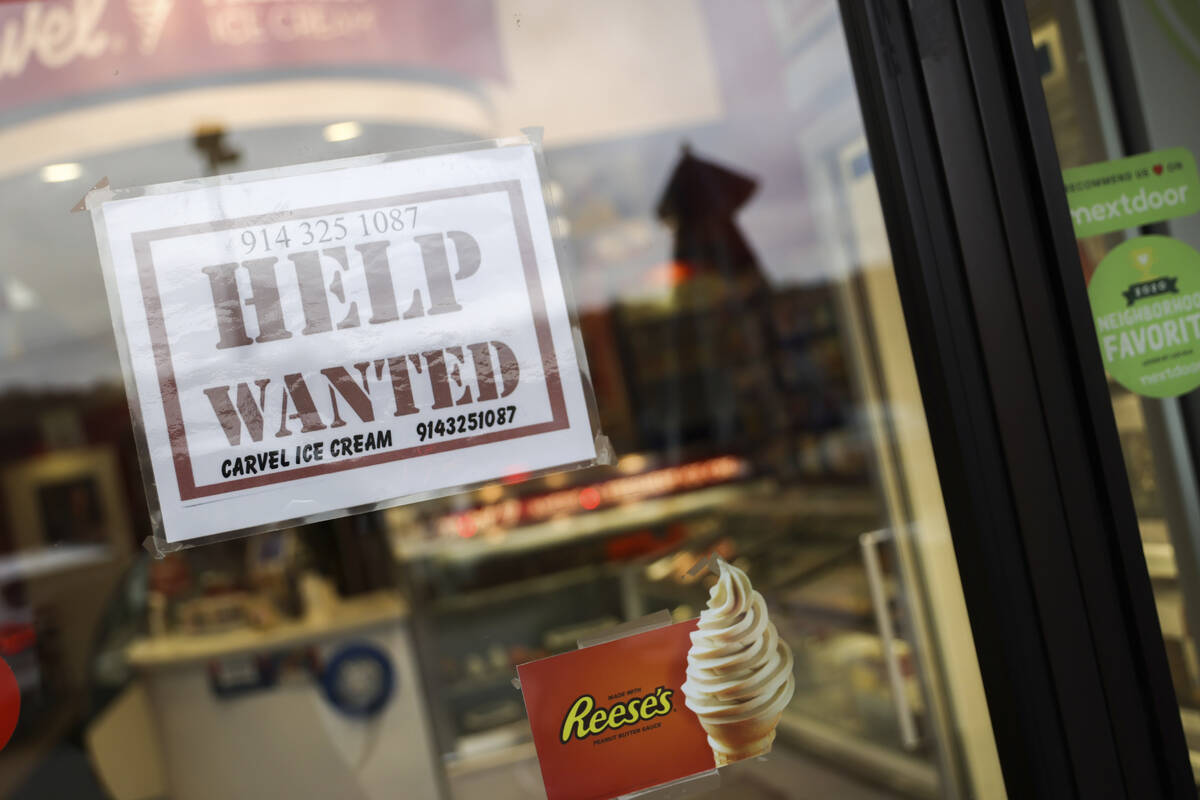 A help wanted sign in a storefront, Tuesday, Nov. 1, 2022, in Bedford, N.Y. The Federal Reserve may reach a turning point this week as it announces what's expected to be another substantial three-quarter-point hike in its key interest rate. The Fed's hikes have already led to much costlier borrowing rates, ranging from mortgages to auto and business loans. (AP Photo/Julia Nikhinson)

WASHINGTON — The Federal Reserve pumped up its benchmark interest rate Wednesday by three-quarters of a point for a fourth straight time to fight high inflation but also hinted that it could soon reduce the size of its rate hikes.

The Fed’s move boosted its key short-term rate to a range of 3.75% to 4%, its highest level in 15 years. It was the central bank’s sixth rate hike this year — a streak that has made mortgages and other consumer and business loans increasingly expensive and heightened the risk of a recession.

In a statement after its latest meeting, the Fed said that in coming months it would consider the cumulative impact of its large rate hikes on the economy. It noted that rate increases take time to fully affect growth and inflation.

The Fed’s meeting occurred as financial markets and many economists have grown nervous that Chair Jerome Powell will end up leading the central bank to raise borrowing costs higher than needed to tame inflation and will cause a painful recession in the process.

Powell implicitly addressed those fears at a news conference. While stressing that the Fed would keep raising rates — possibly even higher than it had forecast in September — he left the door open to downshifting to a half-point hike when it next meets in December. The Fed could then step down even further to a quarter-point increase — a more typically sized rate hike — early next year.

“At some point,” he said, “it will become appropriate to slow the pace of increases. So that time is coming, and it may come as soon as the next meeting or the one after that. No decision has been made.”

Powell appeared to be trying to strike a delicate balance in suggesting both that Fed may start downsizing its rate increases yet remains focused on defeating inflation and raising rates as high as necessary.

“We think we have a ways to go,” to cool inflation, he suggested.

The persistence of inflated prices and higher borrowing costs is pressuring American households and has undercut the ability of Democrats to campaign on the health of the job market as they try to keep control of Congress. Republican candidates have hammered Democrats on the punishing impact of inflation in the run-up to the midterm elections that will end Tuesday.

Stock and bond prices, which had risen immediately after the Fed issued its policy statement, fell into negative territory after Powell made clear at his news conference that the central bank remained committed to steadily tightening credit to a level that will weaken the economy.

The Fed chair pointedly stressed that it would be “very premature” to think about halting the rate hikes to allow time to see how well they are working. Inflation pressures, he said, remain far too high.

“Chair Powell stuck to this two-pronged message: We’re not done yet, due to high inflation and a strong commitment to bring it down,” Sal Guatieri, senior economist at BMO Capital Markets Economics, wrote in a note. “But we may not need to keep cranking rates aggressively, due to an economy that has slowed significantly from last year and long-term inflation expectations that are still ‘well anchored.’ “

Typically, the Fed raises rates in quarter-point increments. But after having miscalculated in downplaying inflation last year as likely transitory, Powell has led the Fed to raise rates aggressively to try to slow borrowing and spending and ease price pressures.

Wednesday’s rate increase coincided with growing concerns that the Fed may tighten credit so much as to derail the economy. The government has reported that the economy grew last quarter, and employers are still hiring at a solid pace. But the housing market has cratered, and consumers are barely increasing their spending.

Several Fed officials have said recently that they have yet to see meaningful progress in their fight against rising costs. Inflation rose 8.2% in September from 12 months earlier, just below the highest rate in 40 years.

Still, the policymakers may feel they can soon slow the pace of their rate hikes because some early signs suggest that inflation could start declining in 2023. Consumer spending, squeezed by high prices and costlier loans, is barely growing. Supply chain snarls are easing, which means fewer shortages of goods and parts. Wage growth is plateauing, which, if followed by declines, would reduce inflationary pressures.

Yet the job market remains consistently strong, which could make it harder for the Fed to cool the economy and curb inflation. This week, the government reported that companies posted more job openings in September than in August. There are now 1.9 available jobs for each unemployed worker, an unusually large supply.

A ratio that high means that employers will likely continue to raise pay to attract and keep workers. Those higher labor costs are often passed on to customers in the form of higher prices, thereby fueling more inflation.

Outside the United States, many other major central banks are also rapidly raising rates to try to cool inflation levels that are even higher than in the U.S.

Last week, the European Central Bank announced its second consecutive jumbo rate hike, increasing rates at the fastest pace in the euro currency’s history to try to curb inflation that soared to a record 10.7% last month.

Likewise, the Bank of England is expected to raise rates Thursday to try to ease consumer prices, which have risen at their fastest pace in 40 years, to 10.1% in September. Even as they raise rates to combat inflation, both Europe and the U.K. appear to be sliding toward recession.