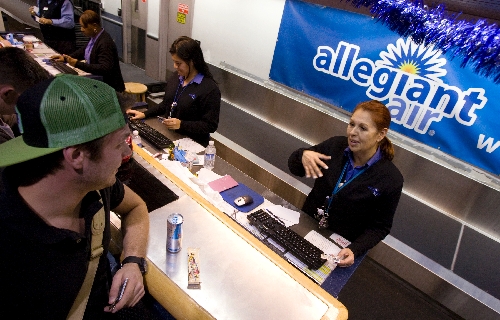 After the latest salvo in a rare air fare war, a cab ride from a Strip hotel to McCarran International Airport may cost more than the flight to Southern California.

Allegiant Travel Co. on Tuesday launched four-times-a-week service to Long Beach Airport by announcing it had cut the one-way price for a limited time to $10.01 for the plane ticket alone or just 1 cent (yes, a penny) if the seat is booked in conjunction with a hotel. Previously, the introductory fare had been $14.99.

Late last month, that $14.99 price prompted JetBlue to slash its fares to as low at $19 a day on as many as four flights a day. Southwest then matched the $19 fare to Los Angeles International Airport on a schedule of about a dozen flights a day. By contrast, Southwest charges at least $49 to the three other airports in the Los Angeles area, in line with other airlines going to LAX.

“This too shall pass,” said Bob McAdoo, an analyst with Avondale Partners in Nashville, Tenn. “But I haven’t seen anything like this in several years.”

Spasms of cutthroat pricing had been a hallmark of airlines for several decades, but fare wars largely disappeared in the past three years as the industry cut capacity and pushed up fares to restore profits.

Because it has the most seats in the Las Vegas market, McAdoo said, “Southwest loses the most, but it can afford to lose the most” because of its overall size and financial strength.

According to Southwest spokesman Brad Hawkins, “This is one market where these fares make sense.”

Allegiant can at least partially recoup revenues through its numerous add-on charges and commissions on hotel, rental cars and even other bookings, McAdoo added. Including extra fees for online ticket purchases and advance seat selection, the final Allegiant price for a round-trip flight to Long Beach is $104.

Allegiant Chairman Maurice Gallagher described the Long Beach fare as an anomaly and not a precursor of future strategy. “This is a unique situation in that Long Beach is a slot-controlled airport,” he said, referring to the regulatory limit on the number of flights allowed per day. “In order to hold those slots, we have to operate them or lose them.”

In the long run, he sees other potential routes out of Long Beach, but he wants to tap into the large and proven Las Vegas-to-Southern California market in the meantime.

The eye-popping fares also serve as a marketing tool to spread the Allegiant brand, he said.

“Only in the airline industry do companies get into childish spats over things they don’t really want,” said aviation consultant Mike Boyd, referring to the Long Beach market. “But the consumers win and, in this case, it’s great for Las Vegas. It’s going to stimulate a lot of business that wasn’t there before.”