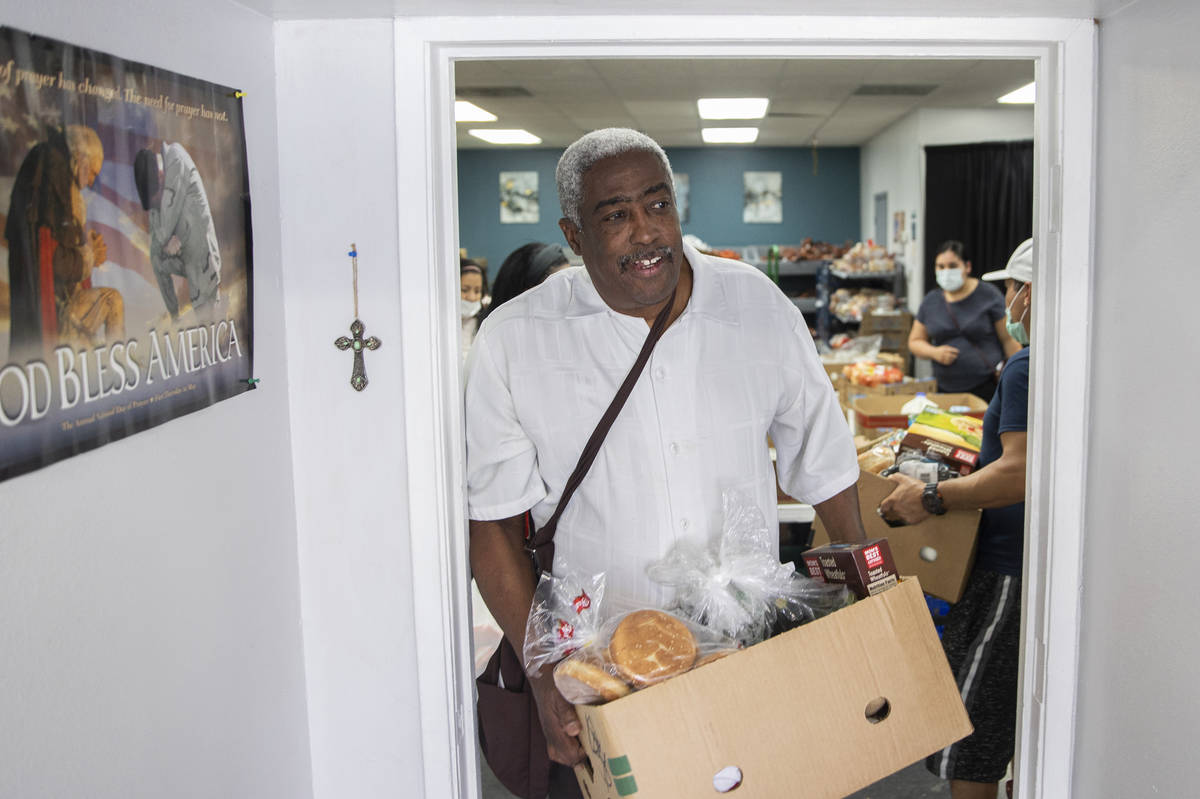 Jimmy Stewart walks out of the food bank with a box of groceries at City Impact Center on Tuesday, June 8, 2021, in Las Vegas. (Benjamin Hager/Las Vegas Review-Journal) @benjaminhphoto 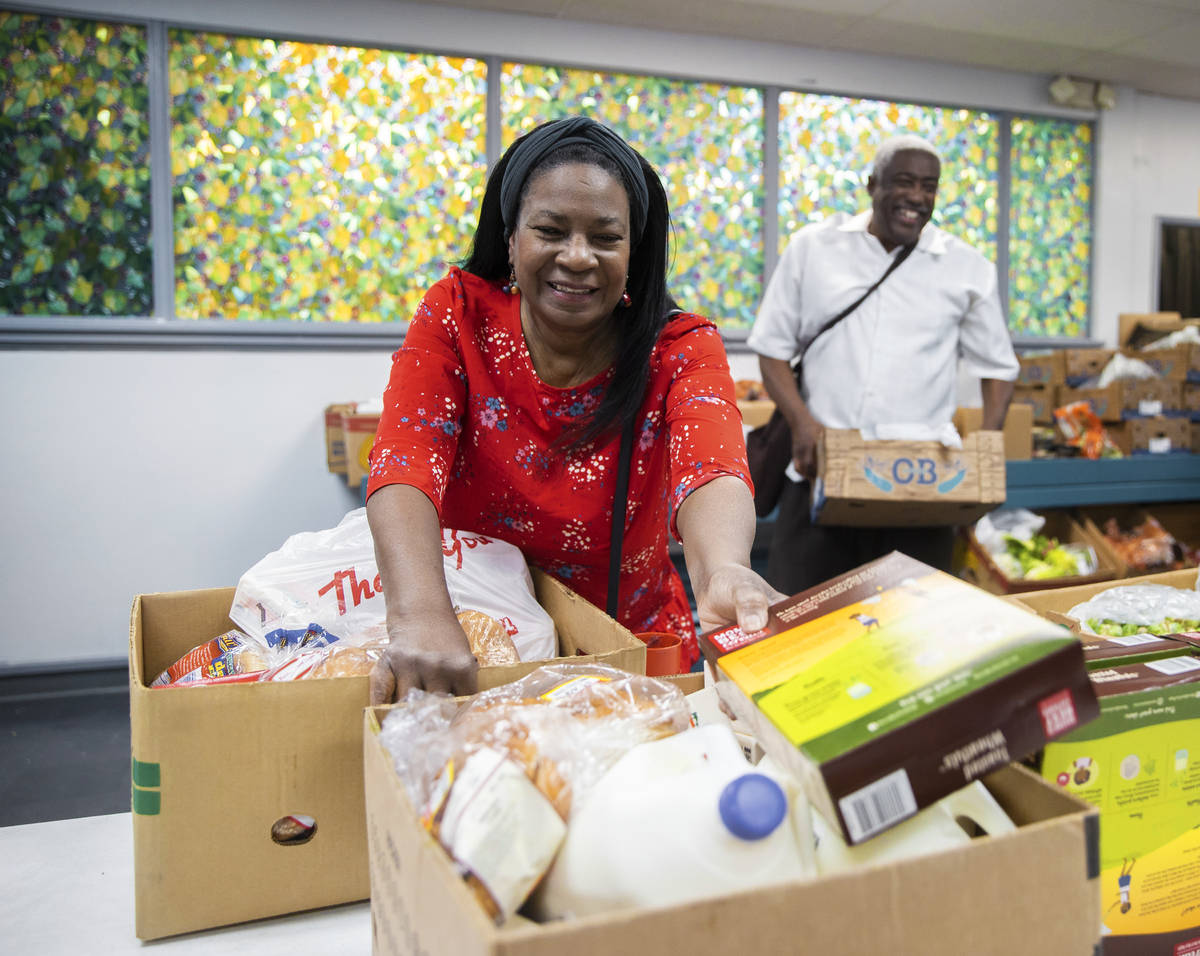 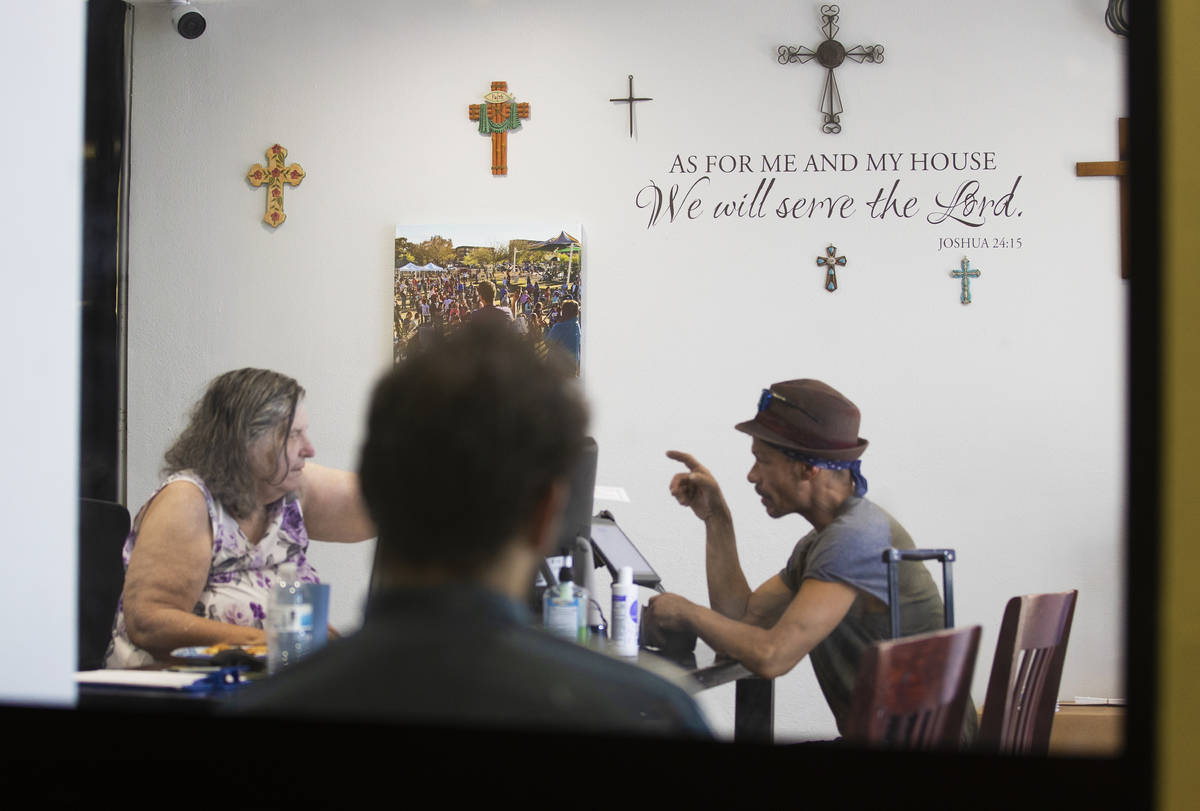 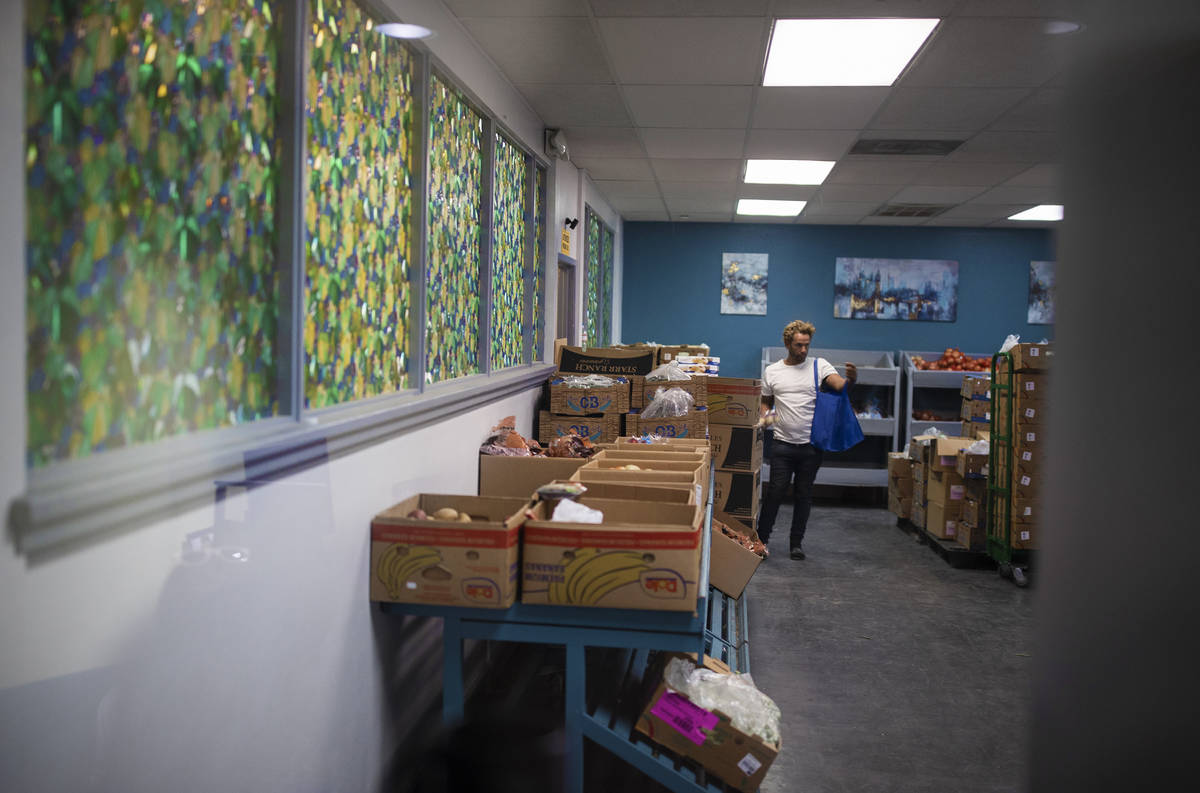 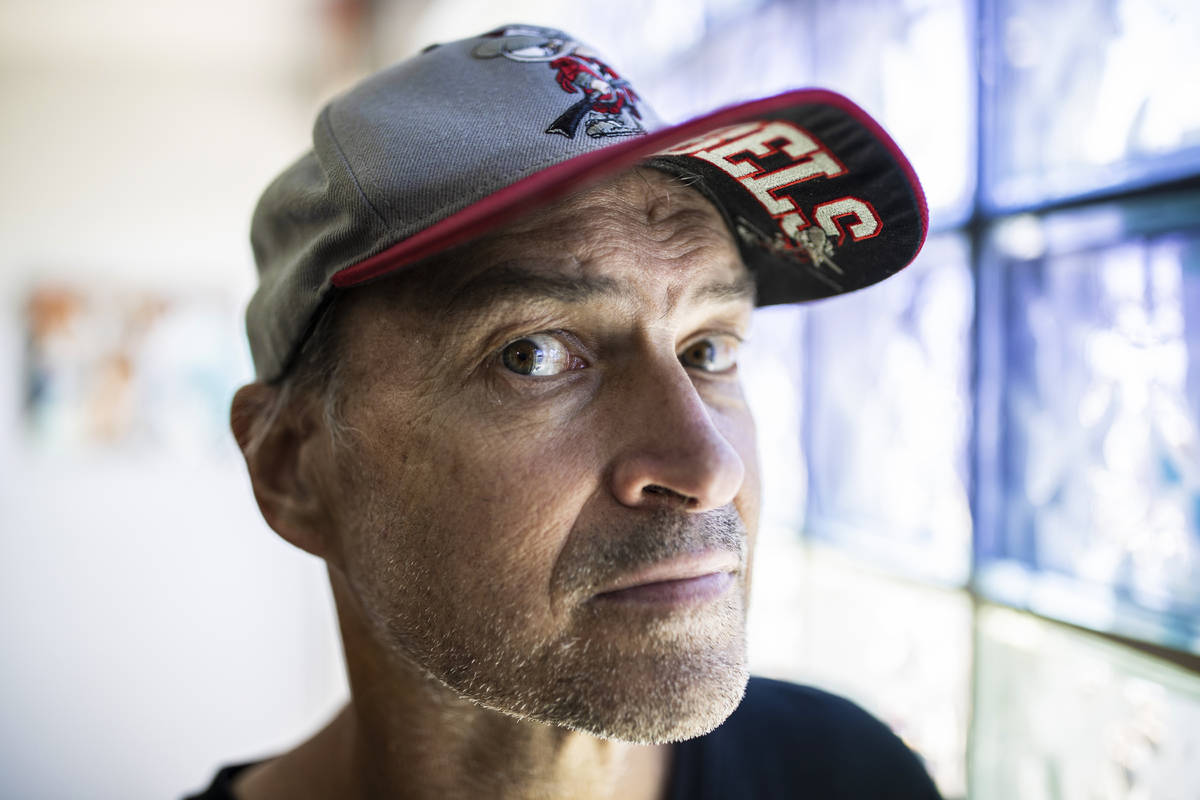 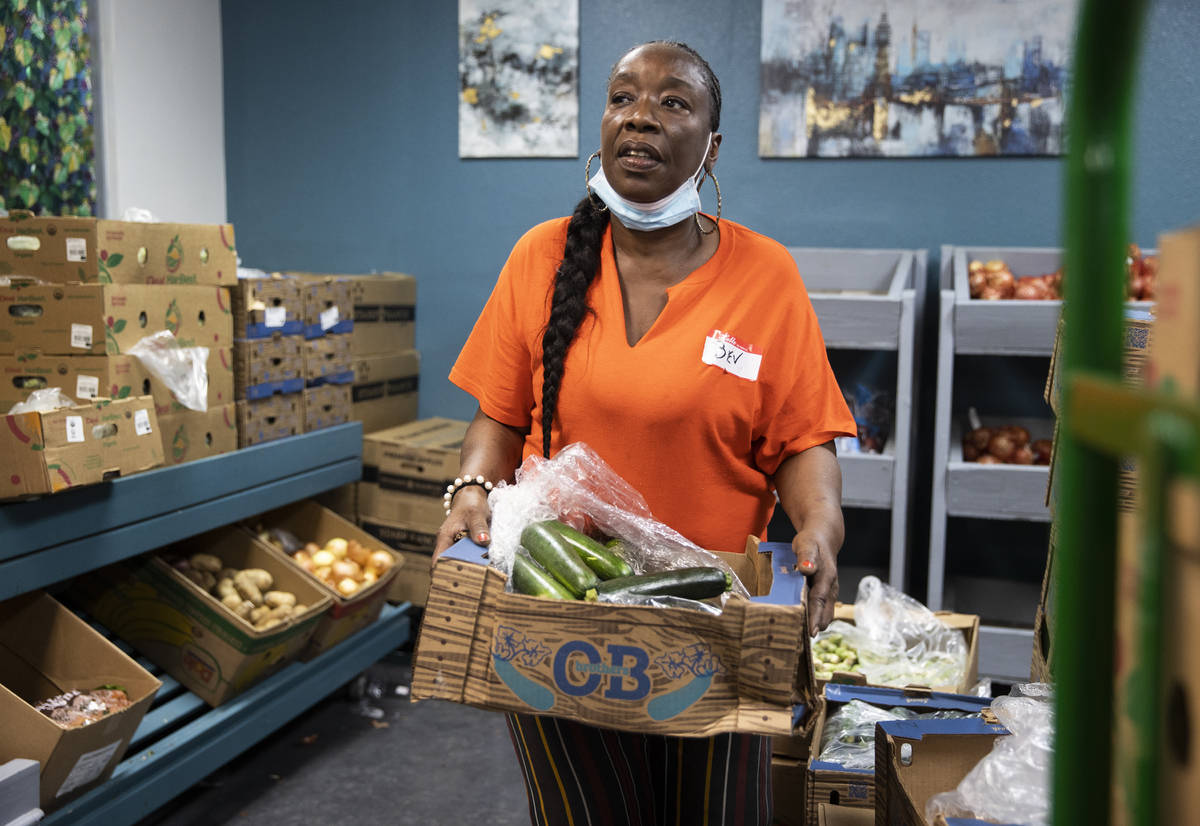 Pat Bremer saw many new faces visiting the City Impact Center Urban Food Bank last year. As a volunteer and client of six years, he knew personally how difficult it could be to ask for help.

After a layoff from his back-of-house restaurant job in 2015, he walked into a pantry and took a chance.

“I was unemployed and I was getting food stamps, stuff like that,” Bremer said. “I walked by the pantry, and something just told me to go in. I don’t know what it was. I went in there, and it was hard (to ask). But once I did it, I realized that it was OK.”

So when City Impact Center began serving as many as 400 families a day in spring 2020 as coronavirus pandemic-related restrictions swept across the Las Vegas area, he understood the hurdle some had to overcome to ask for help.

“I don’t think it was easy for them,” he said. “Some people who asked for help and haven’t needed help, it’s hard for people to ask.”

Las Vegas resident Jimmy Stewart said his vantage point gave him a unique perspective on the issue. He and his wife returned to Las Vegas in January 2020 after 37 years in Hong Kong, where they taught English and did mission work.

They moved into the affordable senior living apartments on City Impact Center’s campus, picking up produce, pasta and canned goods from the pantry next door twice a month. And when the pantry lines grew several blocks long, Stewart took it as a chance to learn American culture again by talking to those in line and observing their resilience.

“Sometimes you can think we’ve forgotten about our brother,” Stewart said. “But then when crises come, we rise up.”

Demand at Southern Nevada food pantries has stabilized from a shocking peak more than a year ago, several leaders said. But Three Square, the only food bank in the region, is still distributing 5.3 million to 5.5 million pounds of food monthly, up from 4.2 million in May 2019.

Food pantries at the City Impact Center’s Urban Food Bank and Catholic Charities of Southern Nevada were once feeding several hundred families a day, with high-end SUVs and sedans unexpectedly sitting in the lines. The challenge now is to keep attention on the thousands who still lack food security.

As business restrictions lift and workers clock in once more, the demand for these social services has decreased from its most severe months, leaders said. But food insecurity remains a problem for thousands in the Las Vegas Valley. Feeding America estimates about 16.3 percent of all Clark County residents and 25.3 percent of children are projected to experience food insecurity in 2021, up from 11.8 percent and 17.4 percent in 2019, respectively.

Where to get the next meal will always be a problem for some, Vic Caruso, director at City Impact Center, said. His agency’s food pantry now serves about 150 families a day, down from as many as 400. Demand was unusually high until March and April of this year, he said.

“The emergency, the fear is gone. People are back to work,” Caruso said. “Over 50 or 60 percent have gone back to normality. But it’s the other ones, they’re still stuck in the mud. They always will be.”

Three Square Chief Operating Officer Larry Scott said that though demand increased, agencies offering the services dropped over the past year. The food bank distributed to about 200 agencies in the past, but some were forced to shutter operations in the pandemic. Now, he estimates that 120 are still receiving food and providing services to clients.

Need changes as economic output, availability of jobs and even financial aid such as federal government stimulus checks come out, Scott said.

“The need is variable to stimulus money and stimulus opportunities that are afforded people,” he said. “At a point of times when stimulus money comes out, the demand declines. It really demonstrates to you that there is first a public assistance that takes place, then the food bank helps to supplement what comes up short from public services.”

At Catholic Charities, officials noticed a shift this year. Deacon Tom Roberts, the nonprofit’s chief executive officer, saw an increased food capacity of about 15 percent. Meals on Wheels, which delivers to homebound adults over 60 years old in North Las Vegas and Las Vegas, began serving 500 more seniors. The waitlist for the meals now sits at about 800.

“Suddenly the system just got put on its head, and suddenly demands went through the roof,” Roberts said. “We’re still dealing with a great deal of demand in the senior market. We’re still seeing families, and new people that have come into the food pantry.”

The need of the most vulnerable is fueling continued services of Delivering with Dignity. Spearheaded by the Moonridge Foundation and hospitality group Blau & Associates in spring 2020, the program partners a handful of restaurants with 40 nonprofits that identify clients who could benefit from meals delivered to their doorstep. They expect to reach 400,000 meals delivered this month.

Leaders of Delivering with Dignity always thought it would be a short-term program, said Tiffany Twohig, the vice president at Moonridge Group. But recent discussions have suggested they should run it through at least the end of the year because so many clients are still unable to get jobs or have not yet received a COVID-19 vaccine because of pre-existing conditions. The program now delivers about 6,000 meals weekly, Twohig said.

“We’re just here to fill a gap and a need that was there in our community during a hard time,” she said. “We’re going to run as long as the community says and the nonprofits say we need to be running.”

The ‘sustainability challenge’ ahead

Because food insecurity is a lagging indicator — a figure showing what a situation was in previous months rather than a prediction — the people experiencing it may be the last to feel the effects of a rebounding economy.

“If magically on July 4, the Las Vegas market was back to where it was … food insecurity does not follow that same straight line,” Roberts said. “The spigot isn’t going to start turning on and money is going to come and people are going to get back to work immediately, and things are going to get better for them right away. It’s going to take time.”

Because of that, it’s up to social services to keep helping those in need, even after the problem seems to have faded out of the public’s view.

“There’s going to be a sustainability challenge for food security that’s going to last,” Roberts said. “Unfortunately, there is a great polarity in a market like Las Vegas. We have people that are of means and people that are struggling. It was like that before the pandemic, and I think the pandemic has opened that wound a bit greater.”

Still, pantries are experiencing improvements: Some pop-up sites have sunsetted, and some pantries are returning to a self-choice shopping model instead of the pre-boxed packages created to enforce social distancing.

Catholic Charities saw an influx of new donors during the pandemic, though others drew back through the uncertain economy, Roberts said. But the philanthropy of some was key to keeping social services afloat.

“Without the new donors, and I can’t speak for other nonprofits, but we would have been really in the weeds,” Roberts said. “If people hadn’t stepped up — when you think about the increased demand we’ve experienced and continue to — had it not been for the donors, we’d have really been in the weeds.”

A previous version of this story misidentified the name of Catholic Charities of Southern Nevada.