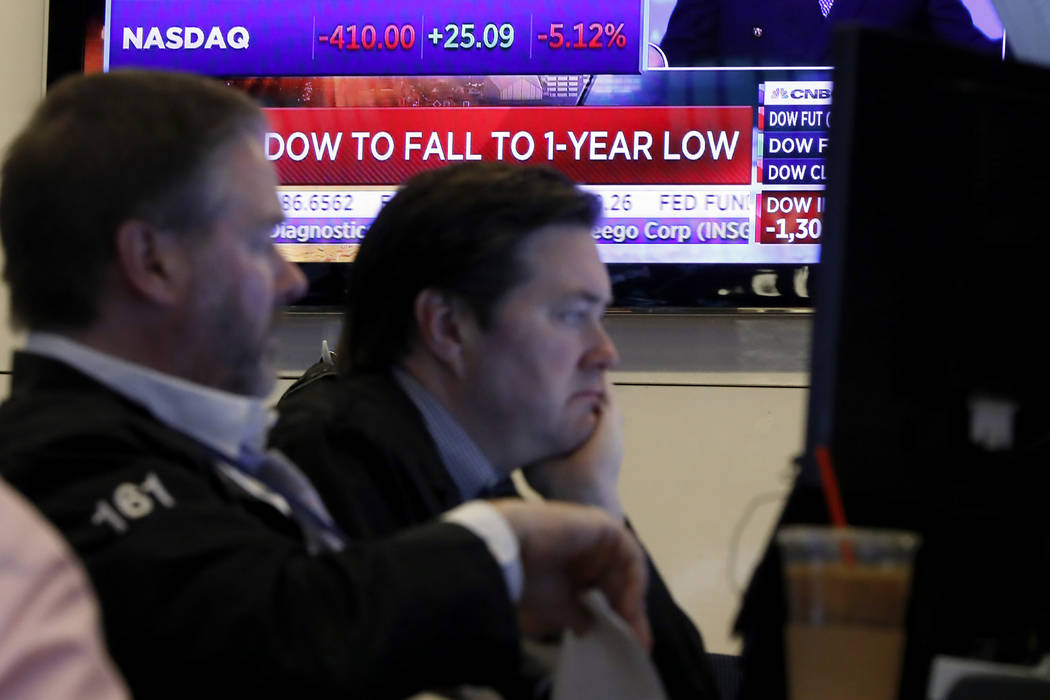 A television screen headlines news as traders prepare for the day's activity on the floor of the New York Stock Exchange, Monday, March 9, 2020. Trading in Wall Street futures has been halted after they fell by more than the daily limit of 5%. (AP Photo/Richard Drew) 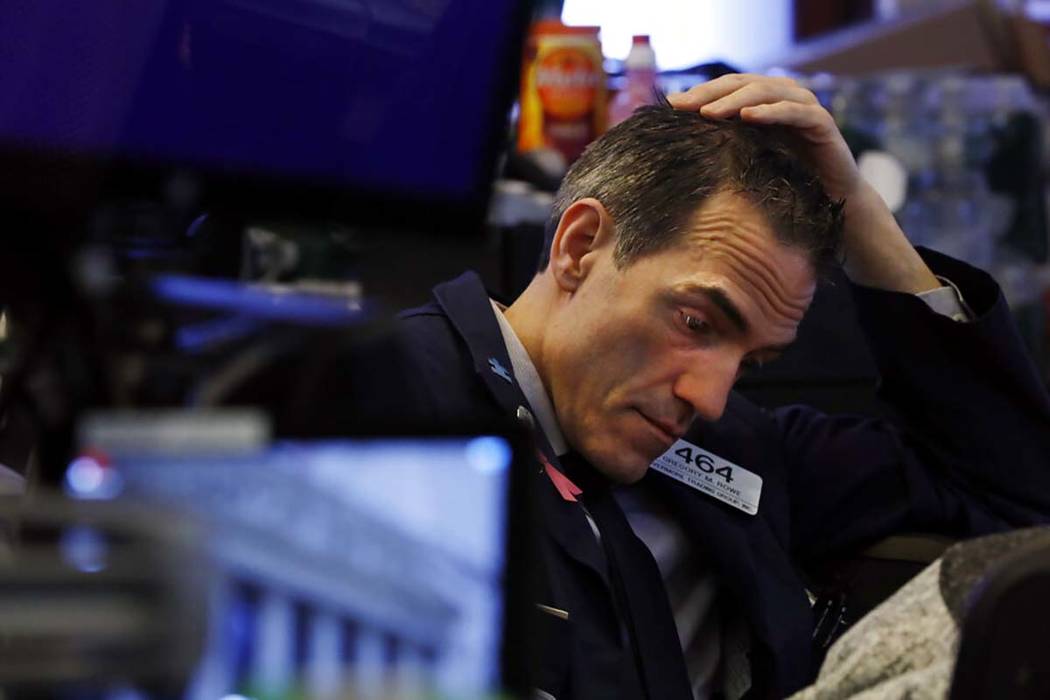 Trader Gregory Rowe prepares for the day's activity on the floor of the New York Stock Exchange, Monday, March 9, 2020. Trading in Wall Street futures was halted briefly after they fell by more than the daily limit of 5%. (AP Photo/Richard Drew) 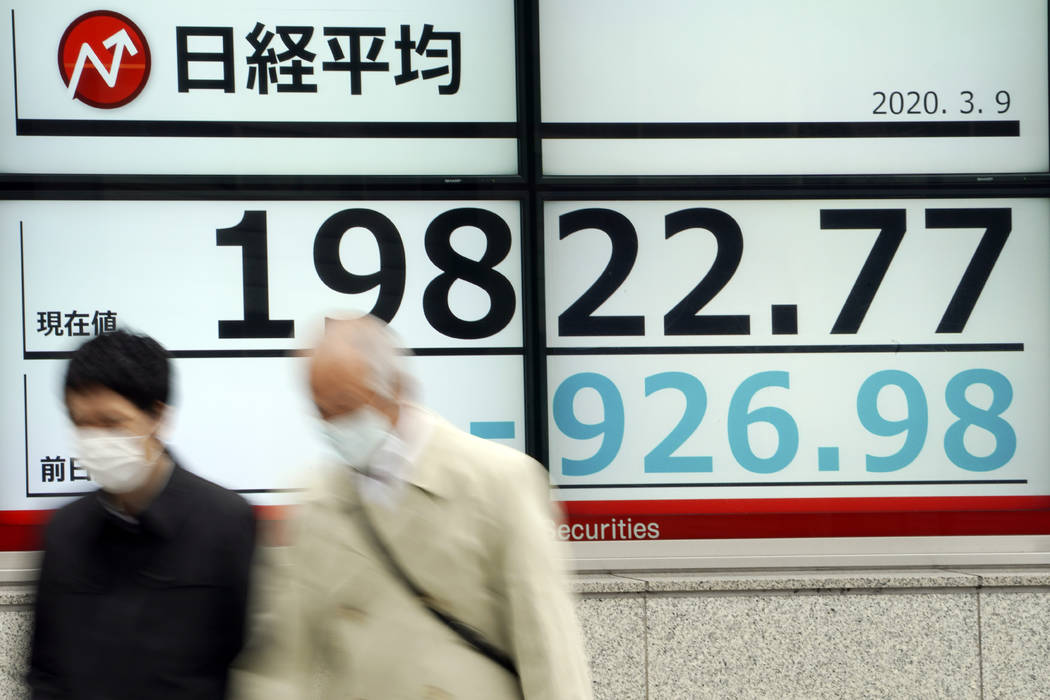 Men walk past an electronic stock board showing Japan's Nikkei 225 index at a securities firm in Tokyo Monday, March 9, 2020. Asian stock markets plunged Monday after global oil prices nosedived on worries a global economy weakened by a virus outbreak might be awash in too much crude. Tokyo's benchmark tumbled 4.7%. (AP Photo/Eugene Hoshiko) 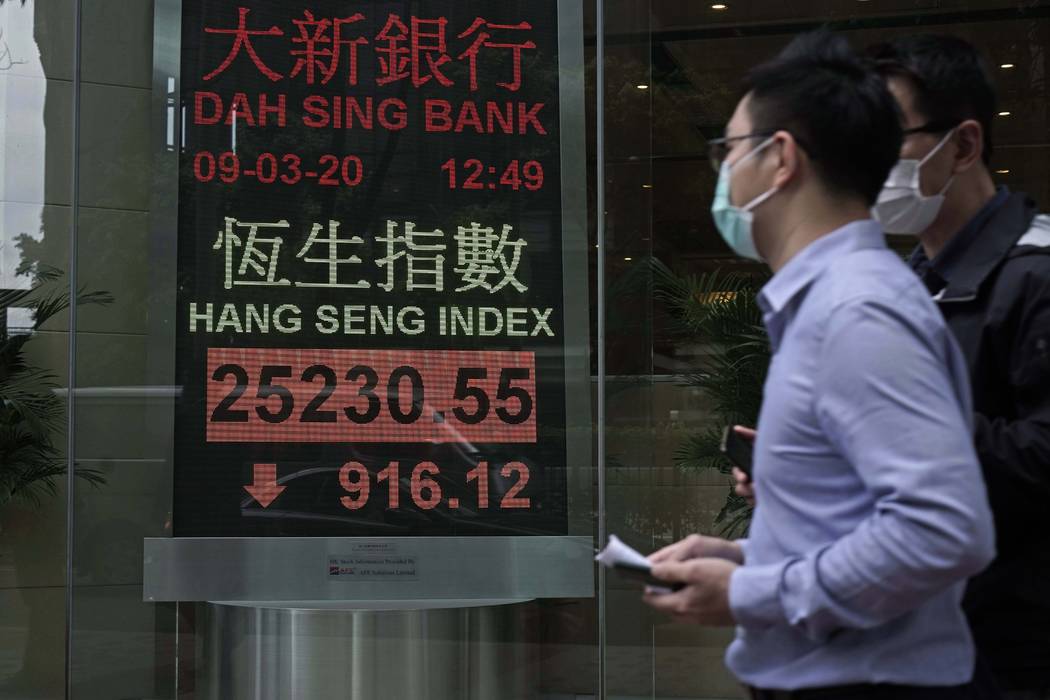 People walk past an electronic board showing Hong Kong share index outside a local bank in Hong Kong, Monday, March 9, 2020. Asian stock markets have plunged after global oil prices nosedived on fears the global economy weakened by a virus outbreak might be awash in too much crude. (AP Photo/Kin Cheung) 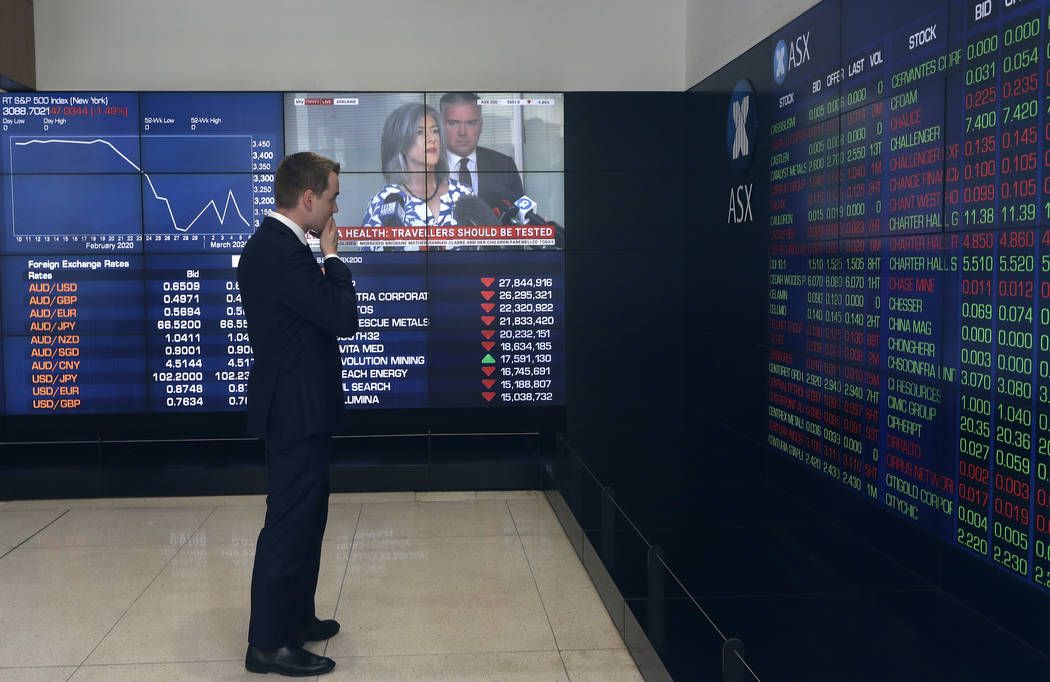 A man stands in the viewing gallery at the Australian Stock Exchange in Sydney, Monday, March 9, 2020. Asian stock market plunge after fall in oil prices. Asian stock markets plunged Monday after oil prices nosedived on worries a global economy weakened by a virus outbreak might be awash in too much crude. (AP Photo/Rick Rycroft) 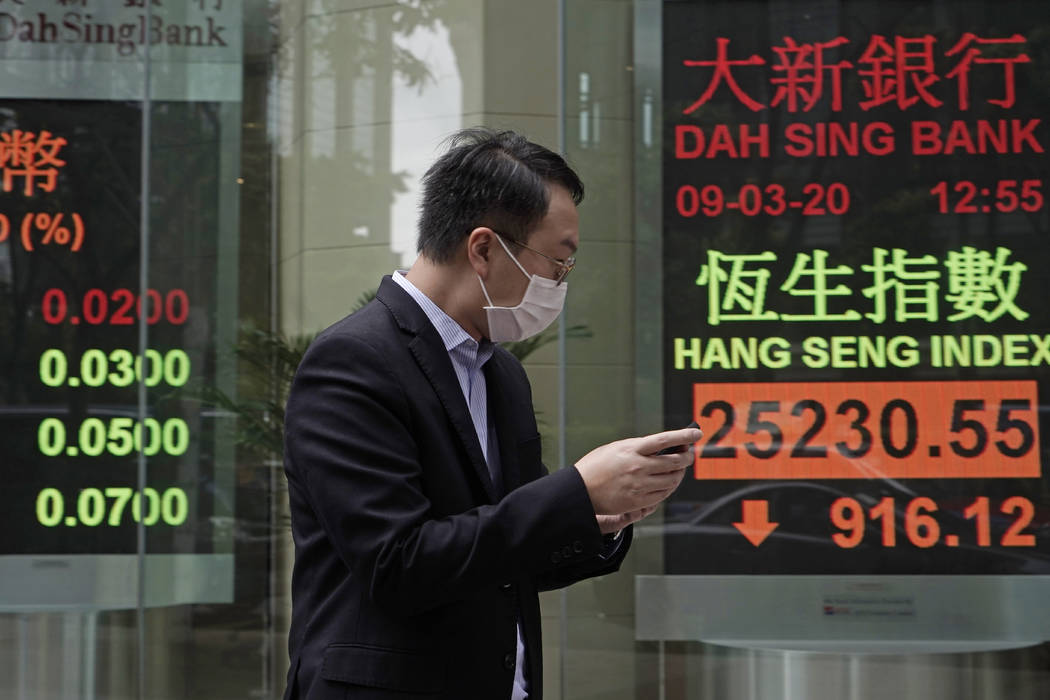 A man walks past an electronic board showing Hong Kong share index outside a local bank in Hong Kong, Monday, March 9, 2020. Asian stock markets have plunged after global oil prices nosedived on fears the global economy weakened by a virus outbreak might be awash in too much crude. (AP Photo/Kin Cheung)

Stocks took their worst one-day beating on Wall Street since the global financial crisis of 2008 as a collapse in oil prices Monday combined with mounting alarm over what the coronavirus could do to the world economy.

The staggering losses, including a 7.8 percent tumble in the Dow Jones Industrial Average, immediately raised fears that a recession might be on the way in the U.S. and that the record-breaking 11-year bull market on Wall Street may be coming to an abrupt end in a way no one even imagined just a few months ago.

The drop was so sharp that it triggered the first automatic halt in trading in more than two decades. European stock indexes likewise registered their heaviest losses since the darkest days of the 2008 meltdown and are now in a bear market.

Together, the sell-offs reflected growing anxiety over the potential global economic damage from the coronavirus, which has infected more than 110,000 people worldwide and killed about 4,000 while prompting factory shutdowns, travel bans, closings of schools and stores, and cancellations of conventions and celebrations big and small.

“The market has had a crisis of confidence,” said Willie Delwiche, investment strategist at Baird.

The market slide came as Italy, the hardest-hit place in Europe, began enforcing a lockdown against 16 million people in the north, or one-quarter of the country’s population, and then announced that travel restrictions would be extended nationwide. Premier Giuseppe Conte said all people will have to demonstrate a valid reason to travel beyond where they live.

The market was also dragged down by another, intertwined development: Oil prices plunged nearly 25 percent after Russia refused to roll back production in response to virus-depressed demand and Saudi Arabia signaled it will ramp up its own output.

While low oil prices can translate into cheaper gasoline, they wreak havoc on energy companies and countries that count on petroleum revenue, including the No. 1 producer, the United States.

“People are very anxious and very uncertain. Then all of a sudden you throw in a wild card that we weren’t expecting and people just went, `Ah!’” said Randy Frederick, vice president of trading & derivatives at Charles Schwab.

He added: “A recession and a bear market are both a very realistic possibility right now.”

President Donald Trump met in the afternoon with Treasury Secretary Steven Mnuchin, economic adviser Larry Kudlow and other aides about a range of economic actions he could take. He also invited Wall Street executives to the White House on Wednesday to discuss the economic fallout from the epidemic.

At a White House press briefing Monday night, Trump said his administration will ask Congress to pass payroll tax relief and other quick measures aimed at easing the impact of the coronavirus on workers. Dow, S&P 500 and Nasdaq futures were up sharply following the remarks.

Asked about the danger of a U.S. recession, Mnuchin said at the White House briefing that the U.S. economy is resilient.

“This is not like the financial crisis where we don’t know the end is in sight,” Mnuchin said. “This is about providing proper tools and liquidity to get through the next few months.”

On Wall Street, the drop in the S&P 500 triggered an automatic 15-minute market-wide trading halt by falling 7.4 percent in the first few minutes after the opening bell. The so-called circuit breaker has been triggered only once before, in 1997.

The S&P 500 has fallen 18.9 percent from the record high it set on Feb. 19 and has lost $5.3 trillion in value during that time. U.S. stocks are now uncomfortably close to entering a bear market, defined as a drop of 20 percent from their peak.

The interest rate, or yield, on U.S. Treasury bonds fell to all-time lows as investors looking for a safe place kept on putting money into them, even as the return on investment sank closer and closer to zero. The yield on the 10-year Treasury note plunged to 0.59 percent. Up until last week, it had never been below 1 percent.

The carnage in the energy sector was particularly bad. With benchmark U.S. crude dropping to under $32 a barrel, the stock of Apache Corp. and Occidental Petroleum lost more than half its value. Exxon Mobil had its worst day since 2008, while Chevron had its second-biggest drop ever.

“We knew it was going to be a hot day,” said John Spensieri, head of U.S. equity trading at Stifel. He said that the mood was “organized chaos” in the morning but that the trading halt achieved what it was supposed to by stopping the slide.

Despite the scary-looking red numbers flashing on CNBC and other news channels, some financial consultants advised ordinary investors to stick to their long-term plan and not panic.

Scott Heydt, a financial consultant at Heydt Air, said he expects the market will go back to normal, even though it could take a year or so. “It’s definitely not a comfortable time,” he said. “But people need to stop looking at their portfolios on their smartphones every two seconds if they don’t have a stomach for it.”