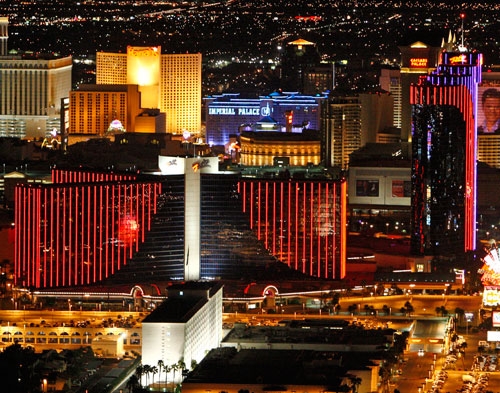 Harrah’s Entertainment on Monday declined to comment on new rumors that the off-Strip Rio may be for sale.

Bloomberg News on Friday cited unnamed sources as saying that Harrah’s is seeking bids for the 89-acre property and Starwood Capital Group and Colony Capital are weighing bids for the property.

Harrah’s Chairman and Chief Executive Officer Gary Loveman, however, told the Review-Journal in June that the company would entertain any buyer who wants to purchase an "asset we don’t consider essential to our strategy."

According to the Bloomberg article, some of the bids are valuing the Rio at $500 million.

The 2,530-room hotel-casino, which Harrah’s bought in 1998, is west of Interstate 15 on Flamingo Road away from Harrah’s nine other properties on the Strip.

The property is best known for hosting the annual World Series of Poker, which Harrah’s also owns.

The Rio is part of a group of properties used as collateral for $5.5 billion in mortgage-backed securities due 2015. The property has a 117,300-square-foot casino with 1,100 slot machines, 90 table games and 160,000 square feet of convention space.

Although Harrah’s doesn’t publish an individual property’s revenue and cash flow numbers, one analyst said she believes a $500 million bid would be a low valuation for the property, valuing it at between 5.5 times to six times cash flow.

"It is difficult to say what the Rio will sell for since the company has not broken out individual property results in years," Barbara Cappaert, a bond analyst with KDP Investment Advisors said Friday in a note to investors. "But extrapolating the numbers (the Rio’s room and gaming floor count compared to other properties) we would guess the Rio is generating between $80 million to $92 million in cash flow."

The last large Las Vegas casino sale outside of bankruptcy was billionaire Phil Ruffin’s $775 million purchase of the Treasure Island in March 2009.

Analysts valued that sale at seven times cash flow, down from the prerecession valuations of between 10 times to 12 times cash flow for Strip casinos.

Colony Capital, a real estate investment firm for Los Angeles, was rumored to be interested in buying the Rio in late 2004. Harrah’s reportedly was seeking a little more than $1 billion for the property then.

Colony Capital is part of a group of investors now bidding to retain control of the bankrupt Station Casinos.

Colony Capital paid $2.6 billion in cash in November 2007 for a 76 percent equity share of the locals gaming company.

The firm also owns 60 percent of the Las Vegas Hilton.

Starwood Capital has reportedly bought control of Riviera Holdings Corp.’s first mortgage and is trying to negotiate a prepackaged bankruptcy to acquire the 26-acre Strip property and its sister casino in Colorado. Prepackaged bankruptcies are Chapter 11 reorganization plans prepared with creditors’ cooperation.