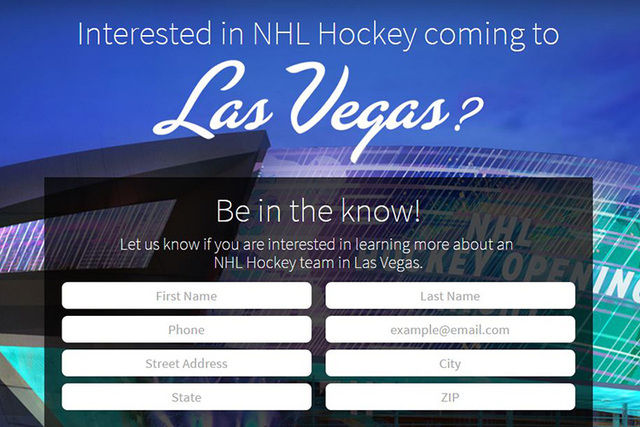 The ownership group looking to launch a National Hockey League team in Las Vegas has created a website called LasVegas-Hockey.com for fans interested in registering their names, emails and addresses.

The home page says, “Be in the know! Let us know if you are interested in learning more about an NHL Hockey team in Las Vegas.”

The group, Hockey Vision Las Vegas LLC, consists of William Foley, who owns a Jacksonville, Fla.-based insurance title and mortgage company, and the Maloof family of Las Vegas, former owners of the NBA Sacramento Kings from 1998-2013 and founder of the Palms.

The home page shows a rendering of the $375 million arena on the Strip being built by the partnership of MGM Resorts International and Anschutz Entertainment Group. The arena, located behind New York-New York and near the front of Monte Carlo, is scheduled to open in April 2016.

Fans need to check the “I am not affiliated with a ticket broker” box to register their contact information.

Foley said this week that Hockey Vision Las Vegas wants to launch a ticket registration drive in February to show NHL officials that Las Vegas is a viable market. The NHL has no official plans to expand.