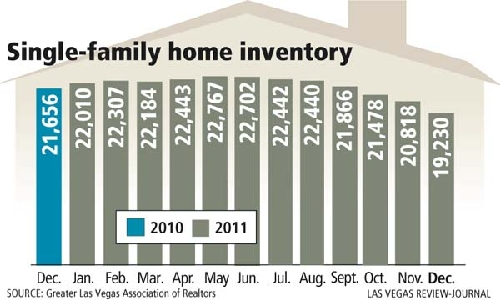 Institutional and private investors contributed to a record year for Las Vegas home sales in 2011, but prices are being held down by cautious appraisers and the high number of foreclosure sales, real estate brokers and analysts said Monday.

A total of 48,186 single-family homes and condos were sold in Las Vegas last year, topping the previous record of 46,879 set in 2009, the Greater Las Vegas Association of Realtors reported Monday.

Roughly half of all sales were cash-only transactions, while 46.8 percent were real estate-owned, or bank-owned properties returning to the market after foreclosure. Another 26.6 percent were short sales, or lender-approved sales for less than the principal mortgage balance.

What was good news for Realtors selling existing homes was bad news for builders and developers last year, as new-home sales plummeted from nearly 39,000 in 2006 to fewer than 4,000 in 2011, the lowest level since Home Builders Research began tracking the market in 1988.

And there was a grim statistic for anyone selling a home: The median price of a single-family home declined to $120,000 in December, down 9.1 percent from the same month a year ago.

Kevin Kelly of Platinum Land Kings real estate brokerage said prices continue to fall as appraisers peg values to what he called a "false floor," the lowest comparable sale in a neighborhood, almost always a foreclosure or short sale.

A buyer may be willing to pay more for a home, Kelly said, but banks won’t loan more than the appraiser’s take. That keeps home prices from rising, he said.

"It’s not supply and demand,” Kelly said. "Supply trickled out, and demand was there. Loans are dictated by short sales, and that’s constantly pushing the market down.”

The sales data show that the backlog of homes, though formidable, is falling. The inventory of single-family homes on the Multiple Listing Service decreased 11.2 percent, to 19,230 in December. Of those, 8,831 are listed without a contingent or pending offer.

Rick Brenkus of Keller-Williams Realty said investors continue to snap up properties, but he is seeing people who were sitting on the sidelines now buying homes in Las Vegas. Financing that tightened up in the wake of the subprime mortgage meltdown has loosened up a bit, he said.

"The big question is employment, which is still a drag on Las Vegas. Until that’s cured, we’ll never get out of the housing crisis," Brenkus said. "The other thing is we still have a lot of inventory. The positive is we’re working through it. The downside is we have a lot of it to go through."

One encouraging development is that people who went through a foreclosure or short sale more than three years ago are starting to re-enter the market, he said. Also, he is seeing more "equity" sales, or traditional transactions where sellers aren’t in distress.

"Even as sales return to life, there are so many homes on the market, or that could be put on the market, that sellers can’t ask for much," Kolko said.

Money that has been sitting on the sidelines for years is making its way into the residential market, said Kelly, the real estate investment adviser.

"Many of those companies are actually overcapitalized right now," Kelly said.

Kolleen Kelley, president of the Greater Las Vegas Association of Realtors, said she sees the record sales pace continuing this year. Basic economics of supply and demand suggest at least modest improvement in the local housing market, she said.

"We may see some improvement in prices this year as our inventory of homes on the market keeps going down and demand stays high," Kelley said. "We’re also seeing more short sales, which are preferable to foreclosures and sell for higher prices than homes that have gone through a foreclosure."

Traditionally a slow month, December exceeded November with 3,456 single-family home sales, a 10.9 percent increase from the same month a year ago.

GLVAR statistics are based on data collected through the MLS, which does not necessarily account for new homes sold by builders or those being sold by owners.