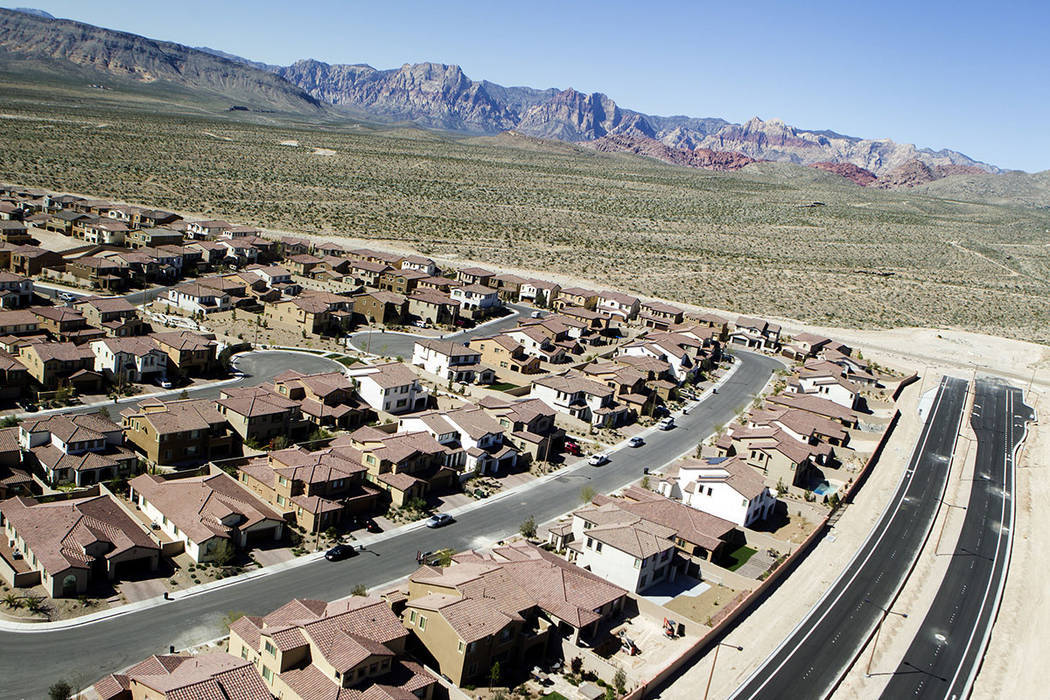 The Paseos in Summerlin, with the Spring Mountains in the background. (Las Vegas Review-Journal)

WASHINGTON — U.S. home prices jumped in February as buyers competed fiercely over a dwindling number of properties for sale.

Steady job gains and rising numbers of millennials moving out on their own has intensified the competition for homes. February’s price gain far outpaces average increases in wages or inflation.

Americans are becoming reluctant to sell their homes as mortgage rates rise, preferring to renovate instead. Others are holding onto their homes because they see few other options available. That’s kept supply tight: The number of homes for sale fell 7.2 percent in March from a year earlier to just 1.67 million.

Sales of existing homes ticked up in March but actually declined slightly from a year earlier as the housing shortage constrained sales.

Homebuyers are getting increasingly aggressive, snapping up homes an average of 30 days after they are listed in March, down from 34 days a year earlier.

In Las Vegas, prices are rising amid a tight supply of resales, a growing job market and an expanding population. Last year also was among the best ever for home sales, despite the plunging availability.

Around 46,600 homes traded hands in 2017, the third-highest tally on record, according to the Greater Las Vegas Association of Realtors, which pulls data from its resale-heavy listing service.

Nationally, there are signs that the supply crunch could ease later this year, as listings have picked up in recent months, only to be quickly sold. And developers are breaking ground on more homes, lifting single-family home construction 5.2 percent in March compared with a year earlier.

Southern Nevada homebuilders had their best first quarter in a decade this year amid a “buying frenzy,” Home Builders Research recently reported. Builders closed 2,400 new-home sales in Clark County in the three months ending March 31, up 17 percent from the same period last year.

Strong job gains in some cities, which hint at an influx of new residents, are pushing up home prices, Standard & Poor’s said. Seattle reported the biggest increase in employment, and had the largest home price gain. Chicago ranked 19th out of the 20 cities tracked in both home price increases and employment. Cleveland came in at 18th place in home prices and 20th in employment.

But in San Francisco and Los Angeles, home prices are rising much faster than their job gains would suggest, a sign that regulatory limits on homebuilding and limited land availability are pushing prices eve higher.