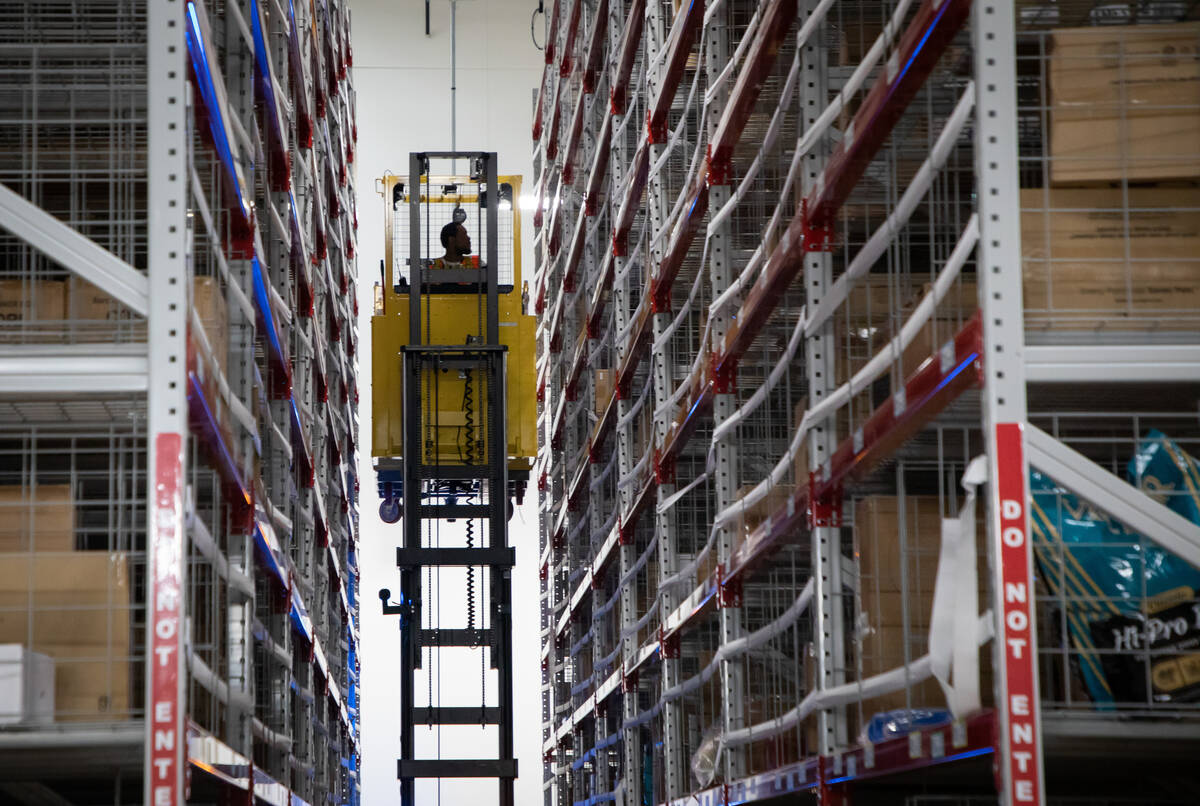 An employee uses a forklift to reach heavier items to be delivered in the narrow aisle section of Amazon's SNV1 facility on Thursday, Dec. 1, 2022. This Amazon building, which facilitates same-day delivery for Las Vegas, is the only one of its kind in Nevada. (Amaya Edwards/Las Vegas Review-Journal) @amayaedw5 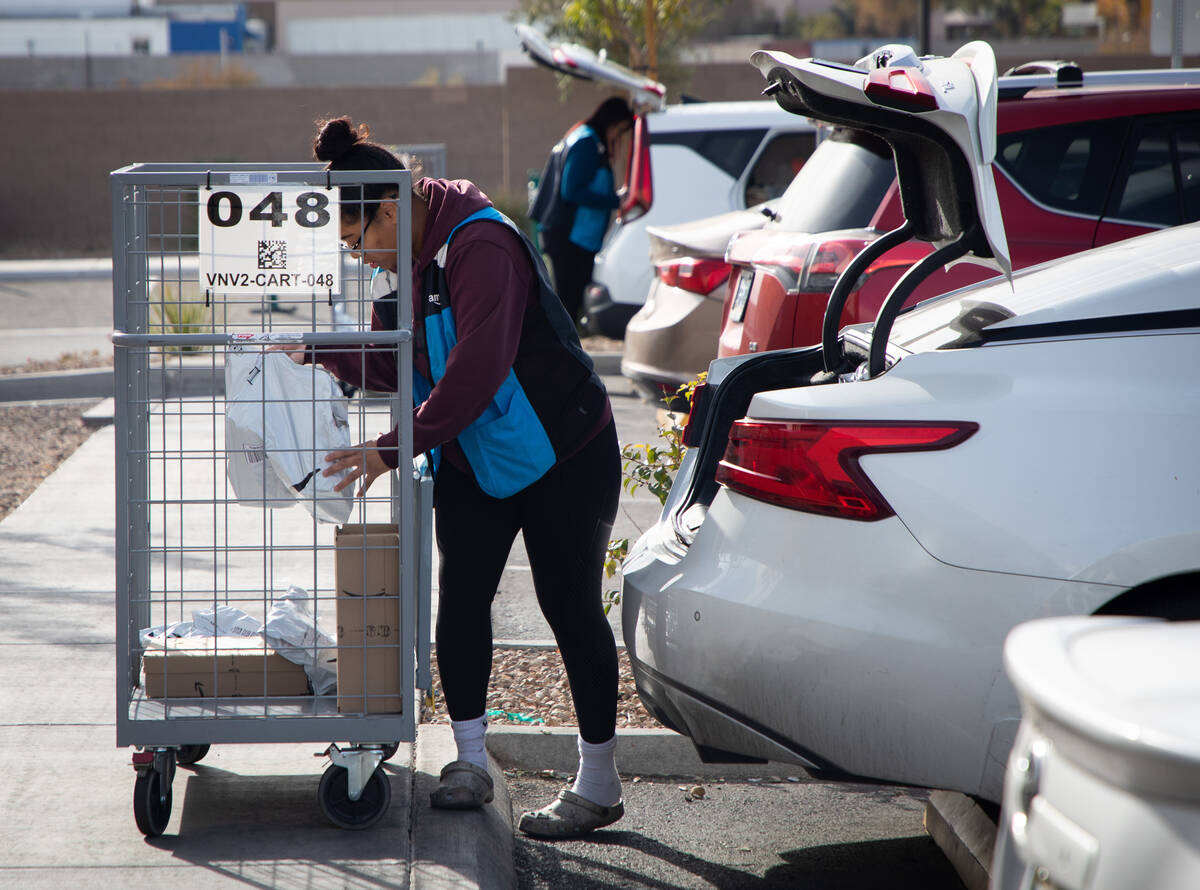 Aalaya McQuaig, Amazon Flex driver, loads packages into her car outside of Amazon's SNV1 facility on Thursday, Dec. 1, 2022. This Amazon building, which facilitates same-day delivery for Las Vegas, is the only one of its kind in Nevada. (Amaya Edwards/Las Vegas Review-Journal) @amayaedw5 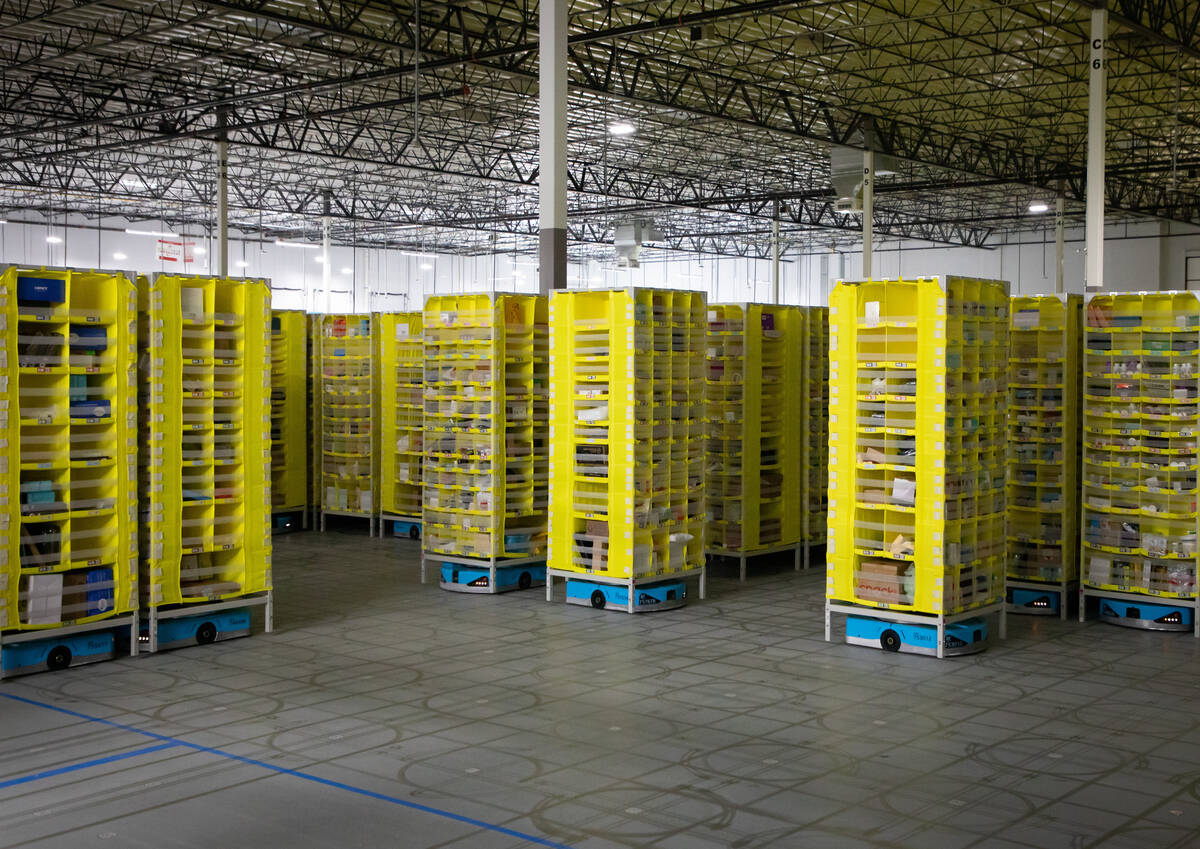 Amazon Drives inside of Amazon's SNV1 facility on Thursday, Dec. 1, 2022. Amazon Drives are robots that help with speeding up the packaging and sorting process in order to fulfill same-day deliveries. (Amaya Edwards/Las Vegas Review-Journal) @amayaedw5

It’s a shopper’s dream — placing an online order and finding the package at their doorstep the same day.

And it’s something e-commerce giant Amazon has been able to do for customers in the Las Vegas area thanks to its facility dubbed SNV1.

The warehouse opened a year ago, just before the holidays, and has since quadrupled its operations, according to Niko Wendt, site manager at SNV1. Now, it’s gearing up for the wave of holiday orders that will likely roll in before Christmas.

The nearly 200,000-square-foot facility sits in an unassuming office park next to Interstate 15 and Blue Diamond Road, and compared with other Amazon facilities, there’s minimal signage indicating it’s home to Amazon.

Wendt said SNV1 is unique because it “combines every process and path” that takes place at separate Amazon facilities under one roof. Other Amazon warehouses in the Las Vegas Valley often focus on just one part of the fulfillment and delivery process like sorting items into categories or placing items on trucks, Wendt said.

Amazon spokesman Matthew Gardea said about 400 people work at the same-day facility, and it manages 600,000 packages a day, although for the holidays that number goes up by “hundreds of thousands.”

It’s also the only same-day Amazon facility in Nevada. When it opened in November 2021, it was the 13th same-day facility in the U.S. but now, there are 48 across the country, with more to be added in 2023.

The warehouse gets packages from other nearby facilities, and it relies on flex drivers, who use their personal cars, to make deliveries, according to Wendt, similar to Uber and Lyft drivers who use their own cars and set their own hours.

Wendt said almost everything except perishable goods like groceries are shipped from SNV1 to customers with addresses in the Las Vegas metro area. And one of the most popular item to be ordered? Pet food, though he said other common orders include things people forget “when they’re on vacation,” such as small electronics and toiletries.

The facility handles packages 23 hours a day, devoting an hour toward maintenance and repairs. It uses a fleet of up to 5,000 robots called Amazon Drives that moves products throughout the facility, and the robots trim a warehouse associate’s walking per shift by an average of five miles, according to Wendt.

And with Christmas just over two weeks away, he said preparing for the holiday season is a constant process.

“Once it’s January and the holidays are over, we start over and plan for next year,” he said.

He noted that customers should place orders before 5 p.m. while Gardea said “last minute purchases can be made early on Christmas Eve and still arrive in time for Christmas morning.”