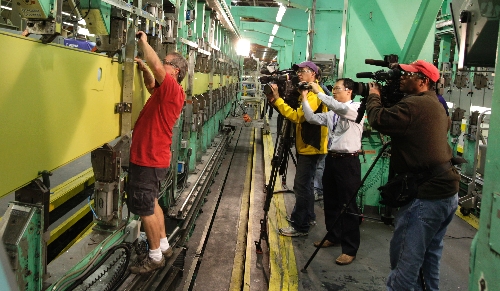 Hewlett-Packard suing ex-chief to keep him away from Oracle

Hewlett-Packard Co. is suing the chief executive it ousted last month, Mark Hurd, to stop him from taking a top job at rival Oracle Corp.

The lawsuit, filed Tuesday in a California state court, came a day after Oracle hired Hurd as co-president to help lead the database software maker’s efforts to steal business from HP. HP claims that Hurd won’t be able to perform his job at Oracle without spilling HP’s trade secrets and violating a confidentiality agreement.

This type of complaint isn’t unusual in the technology world, nor is the confidentiality agreement that Hurd had signed as part of a severance package from HP that could top $40 million.

ZymoGenetics bought for $885 million by Bristol-Myers

Bristol-Myers Squibb Co. said Tuesday it will acquire biotechnology partner ZymoGenetics Inc. for $885 million in another move by a major drugmaker to boost its pipeline by snapping up a smaller developer.

The New York drugmaker’s $9.75-per-share bid represents a 77 percent premium to Zymogenetics’ closing price of $5.51. Bristol-Myers’ said the deal is worth $735 million excluding ZymoGenetics’ cash on hand. Both companies have approved the deal and the board of ZymoGenetics is recommending that shareholders support the bid.

Seattle-based ZymoGenetics makes Recothrom, a drug used to reduce bleeding during surgeries. Since January 2009 it has been working with Bristol-Myers to develop a potential hepatitis C treatment called pegylated interferon lambda. That drug is in midstage clinical testing, and the companies said it "could be an important contributor to Bristol-Myers Squibb’s future growth" if it is approved.

Judges have right to require warrants for cell phone records

Judges have the right to require warrants before police get cell phone records that could suggest a customer’s likely location, a U.S. appeals court ruled Tuesday in a novel electronic privacy case.

The Pennsylvania case involves the government’s interest in records that show a caller’s location during past calls. Cell phone tower records can pinpoint a user’s location to within several hundred feet.

Judges in a Pittsburgh drug case had insisted that federal agents get a warrant for the data. The usage patterns could show when a phone customer is typically home, at work or at some other location, they said.

The government appealed, arguing that the 1986 Electronics Communications Privacy Act required only "reasonable grounds" the data is relevant to a criminal investigation, not the higher probable cause standard needed for warrants.

Tuesday’s ruling was a victory for electronic privacy groups.

The chief executive of Potash Corp. of Saskatchewan Inc. said Tuesday he believes BHP Billiton Ltd. will not be the only bidder for the world’s largest fertilizer company.

Chief Executive Officer Bill Doyle said on a video posting on Potash Corp.’s website that a number of parties have expressed an interest in alternative transactions. He said they have approached some and others have initiated contact.

Doyle said while they continue to discuss those options, they believe that Potash is poised to achieve results as an independent standalone company that "far surpasses BHP’s inadequate offer."

Potash is a potassium compound used in agriculture and industry.

Boeing Co. is slimming down its military aircraft business and cutting workers as the U.S. tightens defense spending and profit margins shrink.

Boeing’s military division makes the well-known Chinook transport helicopters, as well as the C-17 transport and the F/A-18 fighter-bomber.

The job cuts will start with 10 percent of the group’s executives. Boeing didn’t say how many more workers will lose jobs. It will consolidate six divisions of the business into four.

Boeing said in July that layoffs were likely because of expected government spending cuts. The Pentagon has been looking for savings in weapons spending, including pressing for better prices on the C-17 and the F-15E fighter.

Wake up and smell the pancakes at Burger King

Burger King is introducing nine new breakfast items including blueberry biscuits and pancake platters and planning a major breakfast marketing blitz — all with an eye toward eating up some of McDonald’s morning business.

The chain said the move Tuesday is its biggest introduction of new items at one time ever. It also includes iced coffee from Seattle’s Best.

Chief Marketing Officer Mike Kappitt said the company has dabbled in breakfast for years since Burger King introduced breakfast in 1979 but is now making it a major focus.

The rollout includes a marketing campaign featuring six new television ads highlighting the menu overhaul. The campaign will last about twice as long as most other Burger King campaigns.

Breakfast accounts for about 12 percent of Burger King revenue, while McDonald’s gets one-fourth of its revenue from breakfast, Kappitt said.

The new offerings include platters of pancakes, eggs, sausage and other breakfast items ranging from $2.29 to $4.29 and a ciabatta sandwich with eggs, ham, bacon, tomatoes and cheese for $2.89.

Miniature blueberry biscuits — complete with icing dipping sauce — will take the place of the ham omelet sandwich on the $1 value menu.

The popular Croissan’wich will remain.