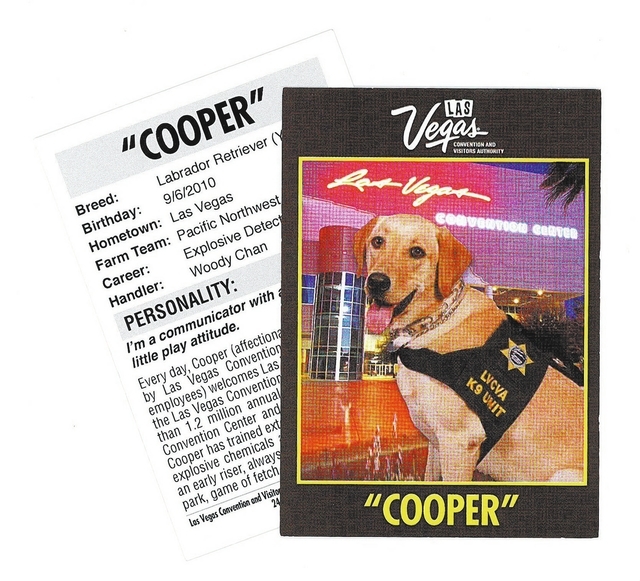 Now’s your chance to collect them all.

The cards are passed out by his handler, Woody Chan. Interestingly, Cooper, “a communicator with an all-work-and-a-little-play attitude,” is known as Jackpot to convention authority employees. Off duty, the cards say he’s an early riser always ready for a dog-gone day in the park, game of fetch or travel. Cute.

A third Melrose Family Fashions store is set to open this year.

The low-price fashion retailer leased 10,000 square feet for a location at the northeast corner of Desert Inn Road and Eastern Avenue. Melrose Family Fashions will join Ross Dress for Less, Fallas Paredes and La Bonita Market in the shopping center.

This third store will be owned and managed by Weingarten Realty, making it the company’s second Melrose location. The shop is expected to open sometime in the third quarter of this year. There are more than 90 Melrose Family Fashion locations in Texas, New Mexico, Arizona, California and Nevada.

Soon, Las Vegas will be home to 10 Maui Wowis.

Through a multiunit franchise agreement, Jon Harris is set to open the businesses after a 40-year gaming industry career. Now his eye is on smoothies and Hawaiian coffee.

Have extra tech? Let Staples take care of it.

The office retailer started a technology trade-in program where customers can recycle used technology products at their local Staples store and online in exchange for store credit. Office electronics that have no trade-in value because of age or condition can still be recycled at the retailer.

The new partnership will aim to provide patients a complete range of surgical and nonsurgical procedures while allowing each doctor to focus on a specific expertise. Patients will have access to a board-certified dermatologist, four medical aestheticians, two registered nurse injectors and a staff of patient coordinators.

The current office of Anson &Higgins PSA, 8530 W. Sunset Road, Suite 130, is undergoing an expansion in preparation for the merger.

The financially strapped city has seen Fitch Ratings downgrade $786.7 million of its general obligation bonds to B with a negative outlook. The ratings agency said the downgrade reflects the city’s continued fiscal distress, as evidenced by the sizable and increasing budget imbalance. North Las Vegas has a budget deficit of $19 million for fiscal 2013.

The city needs an additional $21 million in annual revenue to keep pace with its projected long-term deficit.

“The city has no significant prospects for revenue recovery and virtually no additional expenditure flexibility,” Fitch said.

And the contract goes to … Ledcor.

The Student Activities &Administration Building is a 61,000-square-foot home for admissions, a book store, food services, a campus library, the registrar and financial aid offices, student club and administrative offices.

Ledcor will be the construction manager at risk while the project architect is PGAL. The two buildings are scheduled for completion in August 2015, before the beginning of the academic year.