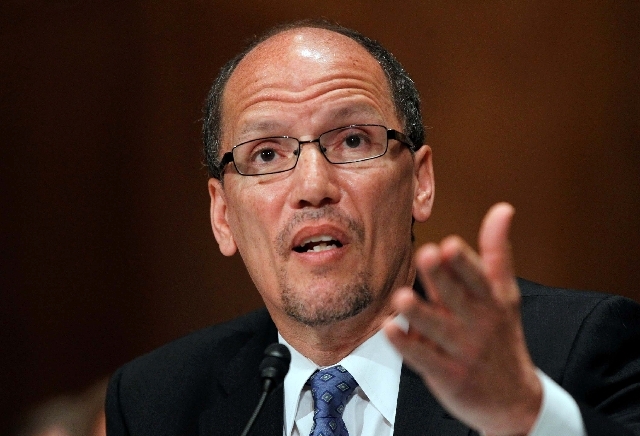 Thomas Perez testifies in April on Capitol Hill in Washington before the Senate Health, Education, Labor and Pensions Committee hearing on his nomination as Labor Secretary. With Perez now confirmed as head of the Labor Department, the agency is expected to unleash a flurry of new regulations that have been bottled up for months -- a prospect that has business leaders worried and labor advocates cheering.

WASHINGTON — With Thomas Perez now confirmed as head of the Labor Department, the agency is expected to unleash a flurry of new regulations that have been bottled up for months — a prospect that has business leaders worried and labor advocates cheering.

Some long-awaited rules would help boost employment for veterans and the disabled, increase wages for home health care workers and set new limits for workplace exposure to dangerous silica dust.

Other, more controversial rules and actions could help labor unions in organizing campaigns and allow union officials to take part in safety inspections at nonunion companies.

“The general view of the business community is that there will be an activist, enforcement agenda,” said Michael Lotito, a San Francisco lawyer who represents employers in labor disputes. “That means there are going to be more lawsuits and the regulatory agenda is going to be alive and well.”

In many cases, the pending rules have languished for two years or more, stalled by election-year politics and the delay in installing Perez as labor secretary. Republicans who opposed Perez say his record as head of the Justice Department’s civil rights division was one of ideological activism. But labor and workplace advocates call Perez a champion for workers’ rights.

“American workers have an advocate in the Labor Department who will protect and defend workers’ rights — from collective bargaining to workplace safety to retirement security,” said Lee Saunders, president of the American Federation of State, County and Municipal Employees.

The Senate confirmed Perez last month on a party-line 54-46 vote, part of a deal in which Republicans agreed to end stalling tactics over several of President Barack Obama’s nominees.

The Labor Department already has dramatically increased enforcement of safety, wage and hour laws during Obama’s administration. Former Labor Secretary Hilda Solis bluntly declared there was “a new sheriff in town” when she took over the department in 2009.

But Perez is expected to take things further based on his track record at the Justice Department. He played a leading role in challenging voter ID laws in Texas and South Carolina and was particularly aggressive in bringing housing discrimination cases. As labor secretary in Maryland, Perez was known for actively going after companies that misclassified workers as independent contractors to avoid paying minimum wage and overtime.

“He’ll probably be more hands-on than Solis was,” said Randel Johnson, vice president for labor issues at the U.S. Chamber of Commerce.

Labor Department spokesman Carl Fillichio declined to comment on specific rules. He referred to the White House’s regulatory agenda, which lists several key rules poised for release in the months ahead.

One rule triggering perhaps the strongest opposition in the business community would require employers to disclose the attorneys and consultants they hire to advise them during union organizing drives, even if the consultants have no direct contact with workers.

If the rule is adopted, unions would know whether a company has hired what they refer to as “union-busting” firms and how much those firms are being paid to offer advice. Employers believe union leaders could use such information to embarrass company managers as they try to persuade workers to back the unions.

“We believe it would severely limit the ability of an employer to get legal advice during a union organizing campaign,” Johnson said.

He said the rule could discourage some companies — especially smaller employers — from seeking advice in the face of a union campaign. The rule-making triggered more than 7,000 comments and vigorous opposition from the American Bar Association, which says it could “seriously undermine both the confidential client-lawyer relationship and the employers’ fundamental right to counsel.”

Unions and other supporters of the rule argue that it would simply close a major loophole that allows employers and management consultants to avoid reporting on their efforts to discourage workers from unionizing.

“We think this is a rule to enhance transparency, and that’s a good thing,” said Lynn Rhinehart, general counsel for the AFL-CIO.

Other rules expected to be finalized in the coming months would:

— Require most companies with federal contracts to set a goal of having disabled workers make up 7 percent of their work force. With federal contractors employing nearly one-quarter of the nation’s workforce, the rule could help lower the perennially high unemployment rate for disabled workers, now standing at 14.7 percent. That’s twice the national 7.4 percent unemployment rate for those without disabilities. Business groups complain the goal is too ambitious and could conflict with federal laws that discourage employers from asking about a job applicant’s disability.

The Labor Department’s Occupational Safety and Health Administration also is expected to propose a major new rule governing exposure to silica dust. In development for more than 15 years, the proposed rule has been awaiting approval at the White House Office of Management and Budget since 2011. Overexposure to silica has been linked to lung disease, including lung cancer, and a host of other illnesses.

Business groups are also concerned about how aggressively Perez will enforce a new OSHA policy clarification that lets nonunion employees designate a union official to represent them during an OSHA inspection.