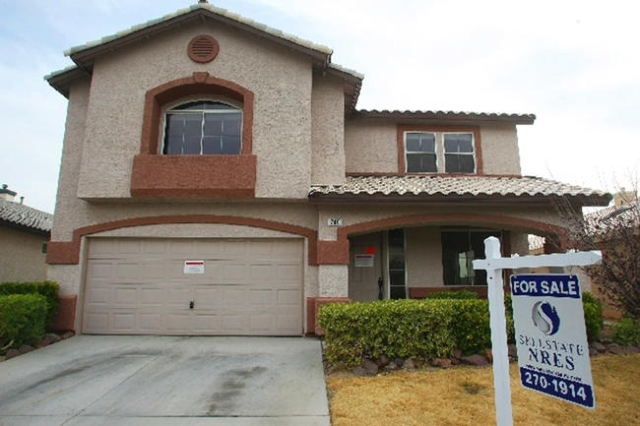 The Las Vegas Valley ranked No. 1 among big U.S. metro areas for its share of homes with mortgages that were significantly under water at the end of 2015. (Review-Journal File)

A key housing indicator showed little improvement at the end of 2015, heralding the potential for a slower local real estate recovery.

The Las Vegas Valley ranked No. 1 among big U.S. metro areas for its share of homes with mortgages that were significantly underwater at the end of 2015.

Fourth-quarter numbers from California research firm RealtyTrac reported that 27.7 percent of valley homes had serious negative equity, defined as a loan that’s at least 25 percent higher than the home’s value.

That was more than double the national rate of 11.5 percent. By way of comparison, San Jose, Calif., had the lowest share, at 1.8 percent.

It’s not unusual for Las Vegas and Nevada to claim the top spot for negative equity. The state and city have ranked at or near No. 1 since 2011, when research firms began tracking the figure.

What’s changed is how slowly the number is dropping today.

Experts say the sluggish decline could be a drag on the broader housing comeback.

Sales website Zillow started watching negative equity in 2011, and reported a peak Las Vegas rate of 71 percent in the first quarter of 2012. RealtyTrac began publishing local statistics in 2013, and found 54.7 percent of homes seriously under water in the second quarter of that year.

But appreciation has moderated since, falling to as little as 6.4 percent year over year in December. The city’s share of seriously underwater homes has languished in lockstep, dropping just 3.3 percentage points in the last 15 months.

Expect the number of equity-rich Las Vegans — people whose homes are worth at least 50 percent more than their mortgages — to stay steady as well. Just 13.1 percent of locals qualified as equity-rich at the end of 2015, according to RealtyTrac. The national share averaged 22.5 percent.

The bleak equity outlook is a problem for housing recovery because people with little or no equity can’t spur the market.

“For homeowners who remain under water, mobility is challenging,” said Brian Gordon, a principal in local housing research firm SalesTraq. “It’s difficult to sell and move up or move out given their financial commitments.”

That, in turn, hurts construction jobs, as homebuilding stays sluggish, Smith said. Single-family home permits have stalled at about 7,500 a year, when the market could easily support 10,000, he said.

Even if a large chunk of locals can’t buy, transplants could pick up the slack. The valley’s population expanded 2.2 percent to 2.15 million in 2015, based on new numbers from the Clark County Comprehensive Planning Department.

The market should also benefit from boomerang buyers — consumers who lost their home to foreclosure in the recession and are ready to buy again with healed credit, he said.

“Las Vegas itself is well-positioned with regard to the housing recovery going forward. Population growth is at a relatively robust pace and employment growth is strong,” Gordon said. “Those fundamentals are bringing incremental households into Las Vegas. Reaching a situation that can be considered recovered is probably a ways off when you consider negative equity and long-run trends in price points, but it’s headed in the right direction.”