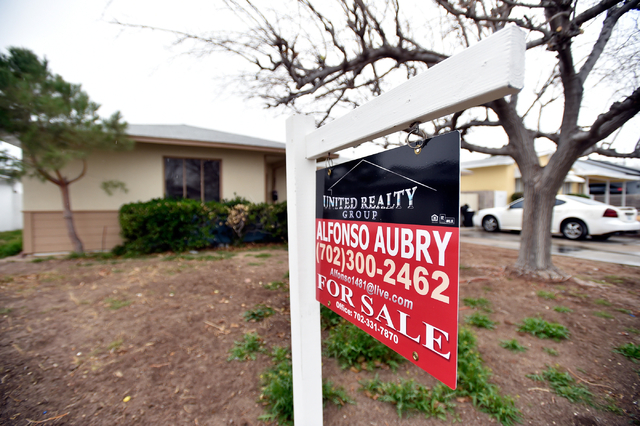 A for sale sign is displayed in front of a downtown home Tuesday, Jan. 19, 2016, in Las Vegas. Homes in Las Vegas appreciated at an annual rate of 6.4 percent, a report on Tuesday indicated. David Becker/Las Vegas Review-Journal file photo

The median price of homes sold in Southern Nevada has nearly doubled since the market hit its low in 2012, new data show.

It shows a continued recovery of the housing market that bottomed in January 2012 with a median price of $118,000. With the June price, that’s a gain of 99.1 percent.

“It means that Vegas will always bounce back, No. 1,” GLVAR President Scott Beaudry said. “We were the hardest hit in the country. We had to bounce back, and it took the amount of years that we anticipated.”

Southern Nevada, however, is still a ways off from the peak of $315,000 in June 2006. Prices are expected to increase even more based on the latest report from CoreLogic, a property analytics firm. It says prices will rise 12.1 percent from the first quarter of 2016 through April 2017.

Price increases continue to reduce the negative equity in the Las Vegas home market. It fell just under 20 percent during the first quarter for the first time since the housing crisis. Las Vegas’ peak in negative equity hit 77.6 percent in early 2010.

Beaudry said that mark could fall in half to 10 percent sometime in 2017, and that will be a great sign for the housing market and boost sales even more. They’ve been limited by a less than three-month supply on the market, he said.

“With 20 percent of the properties still underwater, we’re not quite there yet,” Beaudry said. “We can use some more price gains to get those individuals out of that position. When that 20 percent is gone, then we know we’re completely stabilized. But I don’t want to see it go crazy high because then that will be a problem.”

Beaudry said he’s not concerned about prices going up too fast, too soon because before the recent escalation, they were stable for six months.

“The reason it’s gone up is because we have such low inventory,” Beaudry said. “There’s not much inventory out there – supply and demand – and that will drive up values. If we get more properties on the market, then that will slow off.”

The existing supply is about 2.75 months compared with a normal supply of six months, Beaudry said. That will increase because those who finally get positive equity in their homes will decide to sell, he said. They’ve been waiting because they didn’t want to do a short sale and hurt their credit, he said.

“There were six months where it didn’t go up at all, and that tells me it’s not going up crazy. I don’t think it’s in the bubble range,” Beaudry said.

Only 236 sales of homes, condos and townhomes or 5.9 percent were bank-owned sales in June, down from 6.1 percent in May and 7.6 percent a year ago. Another 176 or 4.4 percent of the total were short sales in which the owner owed more on their mortgage than the property was worth, according to the GLVAR. That is down from 6.7 percent one year ago.

The median price of single-family homes sold through foreclosure sale was $175,000. It was $187,000 for those sold through a short sale, the GLVAR reported.

Cash sales continue to decline, which shows investors are a shrinking supply of buyers in the marketplace. Some 27 percent of sales were with cash, down from 28.2 percent in May. The peak was 59.5 percent in February 2013, according to the GLVAR.

“Investors are dropping off dramatically,” Beaudry said. “What’s we’re seeing is families moving to Vegas because we see more jobs being created.”

Investors are keeping their properties in the rental market and when they finally decide to sell as values increase, that will mean more inventory for those buyers, he said.