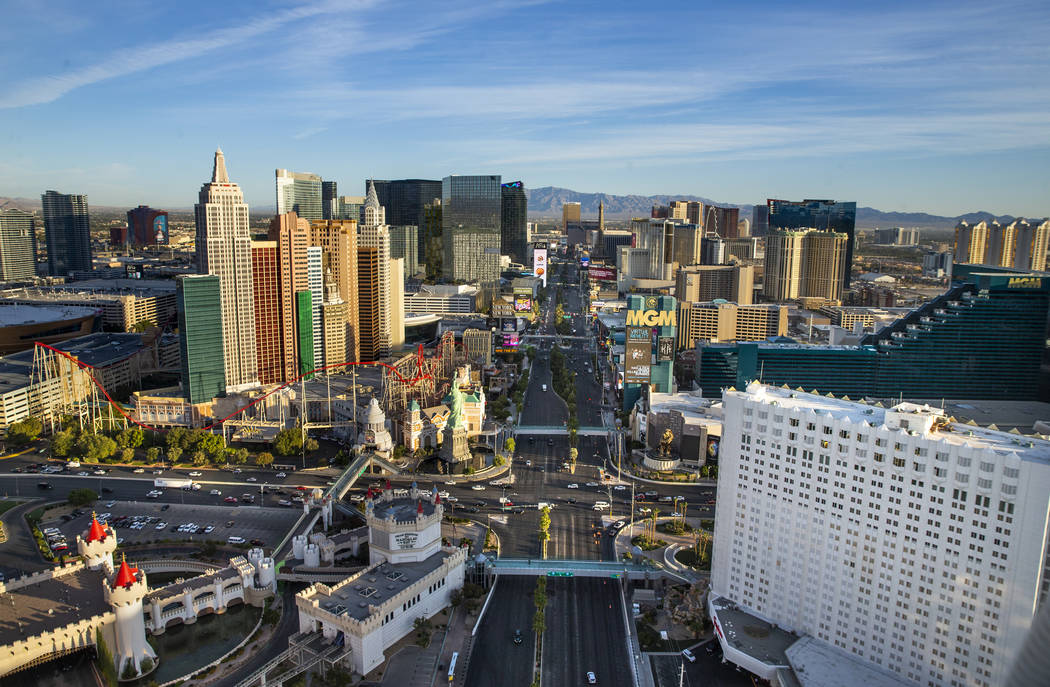 The 430,000-square-foot expanded convention and meeting space, located just north of Sands Avenue and east of the Wynn Las Vegas tower, is scheduled to open at the end of February. There were 650 tradespeople involved in the project.

“The addition of meeting space at Wynn Las Vegas, and throughout the city, will ultimately lead to more attendees and increase resort occupancy,” Chris Flatt, executive vice president of hotel sales and marketing for Wynn, told the Review-Journal earlier this year.

The $2 billion, 65,000-seat stadium and future home of the NFL’s Raiders is set to be substantially completed by July 31. There are nearly 1,000 laborers working on the project six days a week. According to the Southern Nevada Tourism Infrastructure Committee, the stadium is expected to have an annual economic impact of $620 million and create more than 18,800 construction jobs.

The $90 million facility will add about 315,000 square feet of convention space to downtown in the summer of 2020, offering exhibit space for the biannual World Market, trade shows and community events. The Expo will replace the Pavilion tent facilities near West Symphony Park Avenue. More than 300 construction-related jobs will be created for the project. At full occupancy, Expo is expected to generate $97 million in annual visitor spending in downtown Las Vegas.

The 1,504-room resort on Paradise Road will shut its doors in February and close for approximately eight months for a $200 million transformation to become the Virgin Hotels Las Vegas in late 2020. The renovations at the former Hard Rock Hotel will add about 20,000 square feet of convention space and will have a 60,000-square-foot casino and more than 5 acres of poolside space and outdoor event venues. The renovation’s contractors are expected to use up to 500 construction professionals.

The 777-room downtown resort is expected to open in December 2020. The project will include a six-pool swimming area open year-round, a three-story sportsbook and the separate “Garage Mahal” parking garage and ride-hailing transportation hub. The project is expected to generate 2,000 construction jobs and more than 1,500 full-time positions.

The second phase of the facility’s 1.4 million-square-foot expansion and renovation will add about 750,000 square feet of convention space. The $980 million expansion should be completed in December 2020, in time for CES 2021. The project should have an annual economic impact of $810 million and create 13,800 construction jobs, according to the Southern Nevada Tourism Infrastructure Committee.

The Las Vegas Convention and Visitors Authority worked closely with the organizers of CES, the National Association of Broadcasters, the Specialty Equipment Market Association, MAGIC and RECon to plan the Convention Center’s new West Hall, set to open in time for CES 2021. That collaboration ensured that convention organizers got some of the features they wanted in the building while assuring that the city’s largest annual shows stay committed to Las Vegas.

Elon Musk said last week that his commercial tunnel builder hopes to complete its first project, under the Las Vegas Convention Center and connecting to the Strip, in 2020. The $52.5 million project broke ground Nov. 15. When complete, vehicles on Tesla chassis will be used to shuttle up to 16 passengers per vehicle to one of two stations. The vehicle will top out at about 35 mph and will travel across the mile-long tunnel in a couple of minutes. On foot, such a trip would take 15 to 20 minutes, and there’s no direct route.

The $4.3 billion megaresort pushed back its set opening date and now plans to open in 2021. It will be the most expensive resort ever developed in Las Vegas. Developers promise a luxury experience with Asian-inspired touches, a 5,000-seat theater, a 75,000-square-foot nightclub and dayclub concept and 3,500 rooms and suites. The project has created about 1,700 construction jobs, and resort President Scott Sibella said the company’s investment in the north end of the Strip “will have a positive economic impression on both the general vicinity and the larger destination.”

The $1.2 billion MSG Sphere at The Venetian, a 17,000-seat entertainment venue just east of The Venetian, Palazzo and the Sands Expo and Convention Center, is set to open in 2021. The 366-foot-tall structure will have video screens on the exterior and exterior of the sphere. The project is expected to create 3,500 jobs each year during construction, with an annual economic output of $730 million once the venue is operating.

The $3.1 billion, 67-story resort, originally developed as the Fontainebleau before construction halted during the Great Recession, is expected to open on the north Strip in 2022. The facility will include 3,780 rooms and more than 550,000 square feet of convention and meeting space.

The $4.8 billion high-speed train between Las Vegas and Southern California is expected to break ground in 2020 and be completed in 2023. Executives believe trips between Victorville, California, and Las Vegas will take 90 minutes compared with nearly three hours by car. Fares between Victorville and Las Vegas are expected to average about $60, less than the cost of flying or driving when including parking costs. The train is expected to create more than 1,000 construction jobs, transport 5.5 million visitors to Las Vegas annually and remove 4.5 million cars from Interstate 15 annually. Its economic impact is estimated at $1.98 billion. If the line is completed, it will realize a nearly three-decade-long vision of having high-speed rail service between Las Vegas and its biggest visitor market.