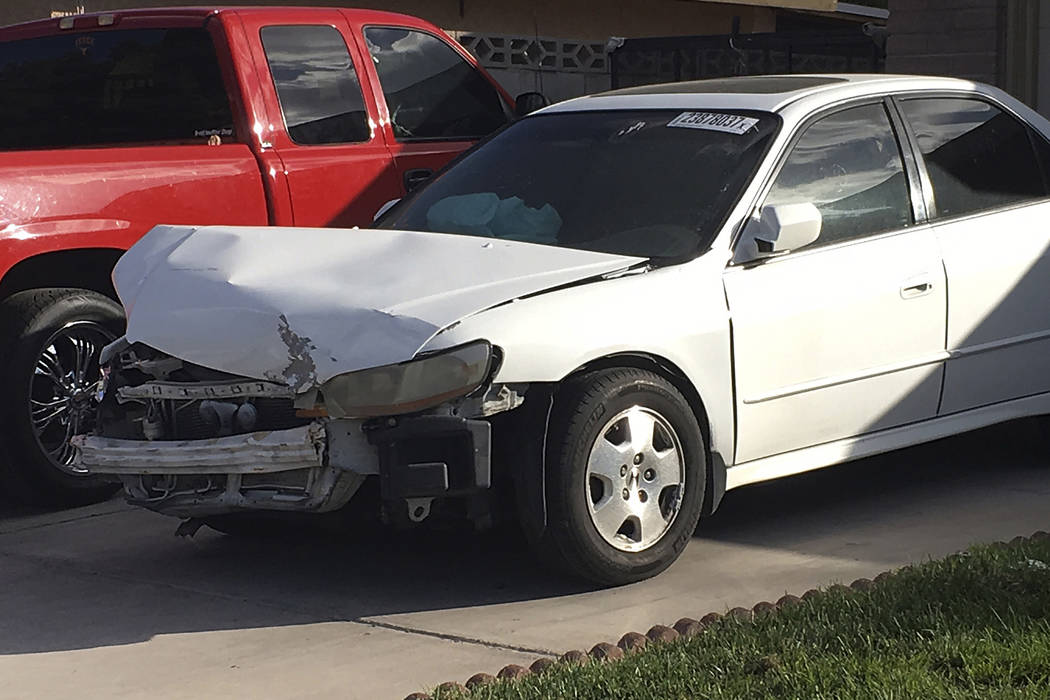 The incident has exposed a danger posed by the recalled parts. Nothing prevents the reuse of air bags from older models to fix wrecked cars that can then be resold, often to unsuspecting buyers. Ken Ritter/AP 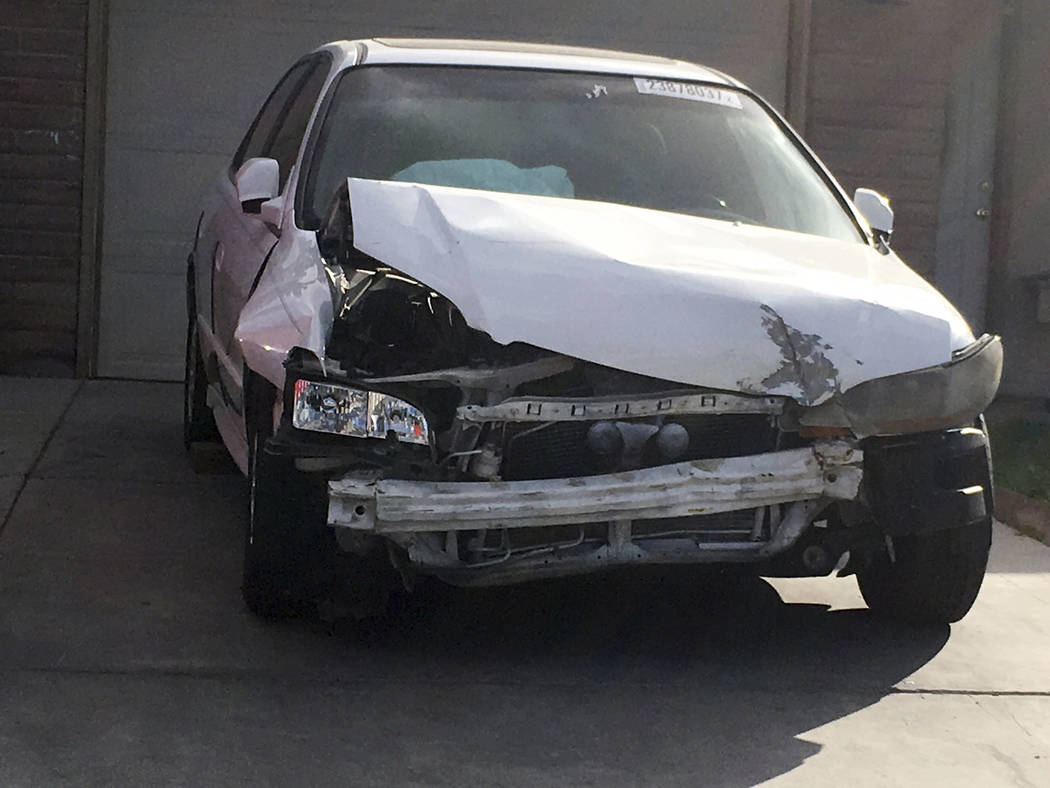 A 2002 Honda Accord involved in a March 3, 2017, crash in which an exploding Takata air bag inflator badly injured the driver, Karina Dorado, sits in a driveway in Las Vegas on Tuesday, April 18, 2017. Ken Ritter/AP

A Nevada crash that nearly killed a young woman has exposed a hole in the government’s efforts to get dangerous Takata air bag inflators off the road: There’s nothing that prevents the devices from being taken from wrecked cars and reused.

Karina Dorado’s trachea was punctured by shrapnel from an inflator in an otherwise minor crash in Las Vegas on March 3. She was rushed to a trauma center, where surgeons removed pieces that damaged her vocal cords. She is still being treated for neck injuries.

Dorado, 18, is among nearly 200 people injured or killed by the inflators, which can explode when the chemical propellant inside deteriorates. What’s different about her case is how the inflator wound up in her 2002 Honda Accord in the first place.

Dorado’s father, Jose, bought the car for her in March of last year so she could get to and from her job at a customer service call center, attorneys for the family said Wednesday. The family did not know the car’s history, including that it had been wrecked in Phoenix and declared a total loss by an insurance company in 2015, the attorneys said.

According to AutoCheck, a service that tracks vehicle histories, the car was given a salvage title, repaired and resold in Las Vegas last spring.

Engineers from Honda inspected Dorado’s car after the crash and traced the serial number from the blown-apart inflator to a 2001 Accord, which had been covered by a recall but never had the inflator replaced.

Honda spokesman Chris Martin said the air bag in the 2001 Accord must have been removed by a salvage yard, or perhaps stolen. Somehow it ended up at the shop that repaired the car eventually bought by the Dorados.

It’s perfectly legal under federal law for air bag assemblies or other parts subject to recall to be pulled out of wrecked cars and sold by junkyards to repair shops that may not even know the danger.

No government agency monitors the transactions. In addition, no states appear to have laws against the reuse of recalled parts.

“What there should be is a program that prevents old air bags from being recycled,” said Michael Brooks, acting director of the nonprofit Center for Auto Safety.

Carfax, another auto history tracking service, said it is unknown just how many cars are sold each year with salvage titles, but they number in the thousands.

At least 16 people have been killed by Takata inflators worldwide and more than 180 injured. The problem touched off the biggest automotive recall in U.S. history, with 69 million inflators recalled. About 100 million have been recalled globally. Takata has been fined and faces lawsuits, and it could be driven into bankruptcy.

Kent Emison, an attorney for the Dorado family, said that given the huge size of the Takata recall, millions of inflators are probably still in use and unaccounted for by authorities.

“People are not going to know until it’s too late that they have a defective Takata air bag,” he said.

The inflator that nearly killed Dorado was among the most dangerous made by Takata. In testing, inflators taken from older Hondas had a 50 percent chance of blowing apart, prompting the automaker and the National Highway Traffic Safety Administration to issue desperate pleas for people to get them replaced.

Unlike most other air bag makers, Takata used the chemical ammonium nitrate to create a small explosion to inflate the bags in a crash. But the chemical deteriorates over time when exposed to heat and humidity, causing it to burn too fast and blow apart a metal canister.

Attorneys for the Dorado family said they are trying to find out where Jose Dorado bought the Accord.

“It’s a tragedy that shouldn’t have happened,” said Billie-Marie Morrison, another family attorney. “You would think in today’s age with communication technology these types of things should not be allowed to happen.”

Morrison said she doesn’t know if the elder Dorado checked the Accord’s vehicle identification number in a government database of recalled vehicles to see if it had any unfixed recalls.

Had he checked, he would have been given a false sense of security: The NHTSA website says the car has zero outstanding recalls. Honda said that before the Phoenix wreck, the previous owners had the air bag inflator replaced twice under recalls.

The federal government has no authority over used car sales and cannot stop air bags from being resold, a NHTSA spokeswoman said. The American Association of Motor Vehicle Administrators said it knows of no states that prohibit salvaged parts from being reused, though some require parts to be inspected to make sure they aren’t stolen.

Honda’s Martin said the automaker has a program to buy up air bags made by Takata. In the past few years it has purchased 60,000 to take them out of circulation, he said.

Karina Dorado still has a hole in her trachea that is covered by a collar and will have to be repaired later, Morrison said. She is starting to get her voice back, but it’s very raspy and she will probably need speech therapy, the lawyer said.

Brooks said people should be suspicious of cars with salvage titles because there is no way of knowing where the parts came from or the quality of the repair work. Although some are safe, stolen or counterfeit parts can be used, he said.

“There are just so many questions that are impossible to answer,” he said. “I would always recommend buying something that has no crash history if you can.”