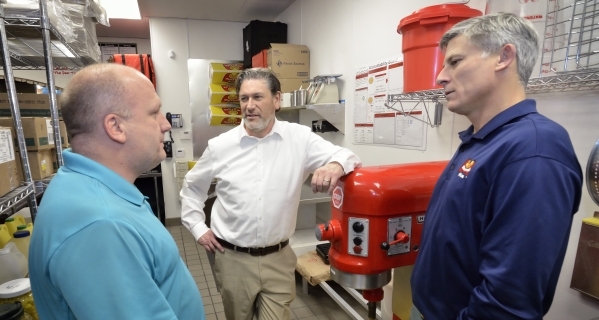 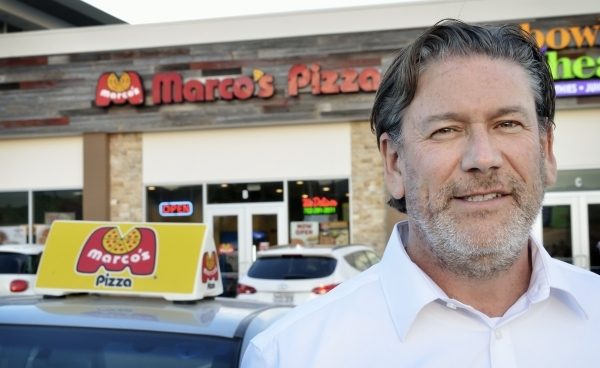 Bryon Stephens, president and chief operating officer at MarcoÃ¾Ã Ã´s Pizza, who was also featured on Ã¾Ã ÃºUndercover BossÃ¾Ã Ã¹ on CBS, is shown at one of the companyÃ¾Ã Ã´s stores at 3400 S. Hualapai Way in Las Vegas on Thursday, Feb. 4, 2016. Bill Hughes/Las Vegas Review-Journal 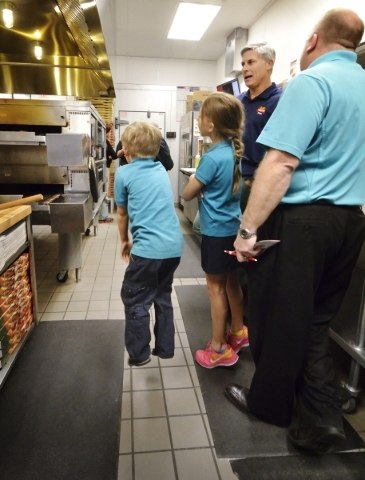 Andrew Stewart, left, jumps to get a better look at a pizza emerging from the oven as his sister Ellie looks on at MarcoÃ¾Ã Ã´s Pizza at 3400 S. Hualapai Way in Las Vegas on Thursday, Feb. 4, 2016. The childrenÃ¾Ã Ã´s father, James Stewart, far right, talks with Cameron Cummins, chief development officer for MarcoÃ¾Ã Ã´s Pizza, during an open house for potential franchisees. Bill Hughes/Las Vegas Review-Journal 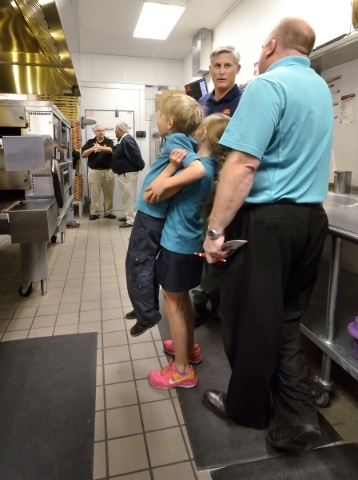 Andrew Stewart, left, gets a boost from his sister Ellie as they watch a pizza emerge from the oven at MarcoÃ¾Ã Ã´s Pizza at 3400 S. Hualapai Way in Las Vegas on Thursday, Feb. 4, 2016. The childrenÃ¾Ã Ã´s father, James Stewart, far right, talks with Cameron Cummins, chief development officer for MarcoÃ¾Ã Ã´s Pizza, about franchising opportunities with the company during an open house at the restaurant. Bill Hughes/Las Vegas Rev 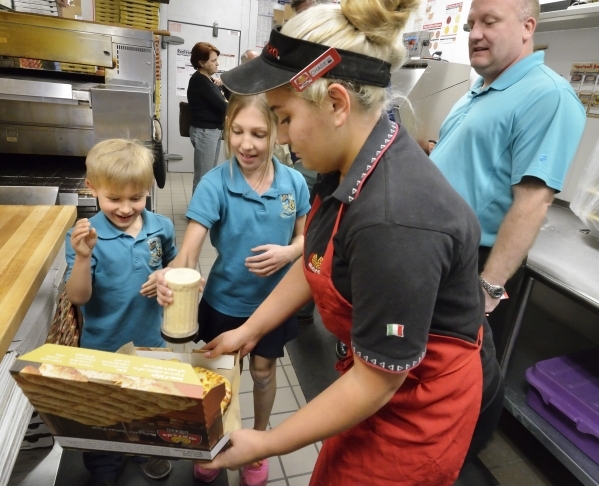 Andrew Stewart, left, watches as his sister Ellie adds cheese to an order for store manager Chase Billow at MarcoÃ¾Ã Ã´s Pizza at 3400 S. Hualapai Way in Las Vegas on Thursday, Feb. 4, 2016. The childrenÃ¾Ã Ã´s father, James Stewart, at right, was at the store for to talk with company officials about franchise opportunities. Bill Hughes/Las Vegas Review-Journal 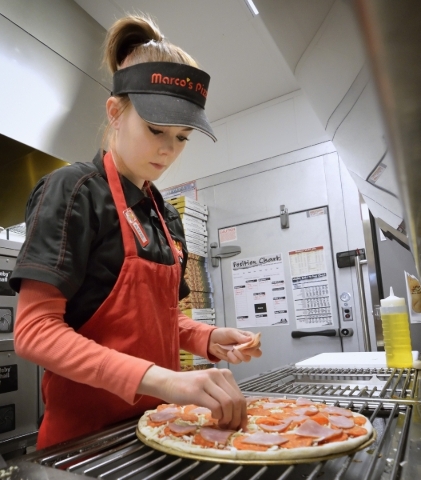 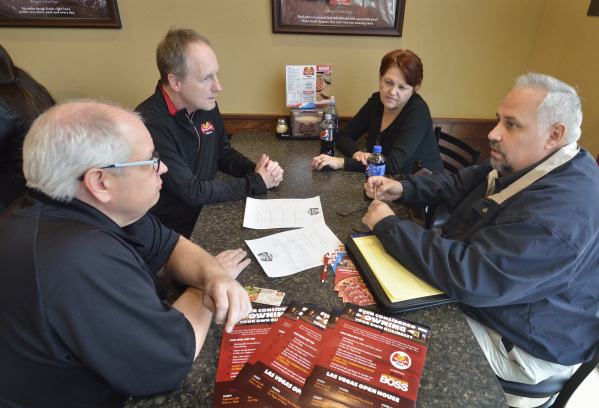 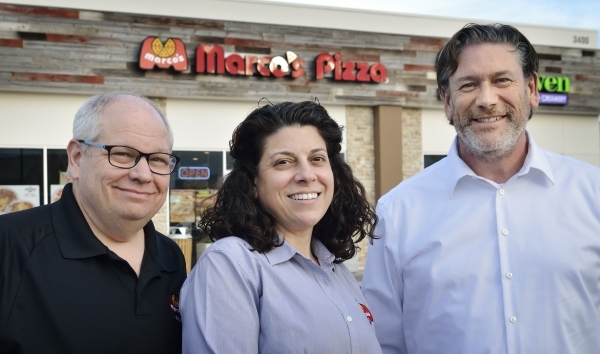 “When you show up at a role in a company, you often get the sanitized version of how things are going and this was an unfiltered view of how we’re doing,” he said of the television show. “It was an incredible experience.”

Stephens flew to Las Vegas to attend an open house at the Marco’s Pizza at 3400 S. Hualapai Way to help give community members the opportunity to learn about becoming a franchise owner.

The open houses, Stephens said, are not new for the company as they’re held all year long at the each of the nearly 700 Marco’s Pizza locations nationwide.

What will be different for the company going forward as a result of Stephens’ “Undercover Boss” experience, is additional safety and security measures for Marco’s Pizza delivery drivers, ensuring stores are better prepped to unload and load the deliveries, more expansive grand opening plans to promote brand awareness and new technology to automatically roll dough balls.

“During the manual labor jobs I went through, I listened to the employees about how tiring and hard it was, so I wanted to take that feedback and make changes,” he said. “We want our delivery drivers to get back home to their families quicker and also save wear and tear on the physical demands of someone having to hand knead and hand roll every one of our dough balls.”

According to Stephens, focusing on safety and security of the delivery drivers will cut down on incidences and installing technology and equipment to make manual labor jobs easier will lead to happier employees for the $400 million pizza chain.

“It will make for greater job satisfaction so they’ll stay in a job longer because they like it more,” he said. “We want our employees to know that we’re taking their concerns seriously.”

In Las Vegas, Marco’s Pizza has five locations across the valley from North Las Vegas to Henderson. Within the next two years, Stephens said the company plans to add an additional eight Southern Nevada stores.

“Our job as area representatives is to provide support, not only in pre-opening site selection, but with employee training, marketing and ongoing support as well,” she said. “Any support the franchisees need, they don’t have to worry about having to call Toledo, I’m they’re local option.”

Billow chatted with community members Thursday evening at her South Hualapai Way location to expose them to the brand and franchise opportunities.

“A franchise is safer than opening up business of your own because there’s a safety and security net since you don’t have to create the recipes or reinvent the wheel; it’s all done for you in exchange for small royalty,” she said. “They can come see the product, how the store functions on a typical night and get a peek behind the curtain.”

Marco’s Pizza franchise owners need to have a passion for serving customers and working with the employees, most of who are between the ages of 18-25, Stephens said.

“A lot of them are first time employees so it takes special ownership to train and coach people in their first jobs,” he said. “You also can’t get into this business just to have a financial investment because the bulk of pizza business is nights and weekends so someone transitioning out of corporate America to be in control of their schedule needs to know that.”

Billow said she’d like to see franchise owners who are looking toward the future.

Billow added that having Stephens on “Undercover Boss” was an opportunity to introduce more people to Marco’s Pizza.

“We’ve already gotten feedback from customers who saw us on television and new customers coming in to try our pizza,” she said. “It was definitely a fair and accurate presentation of what a typical day for us is like and it was a good, positive message for the brand.” 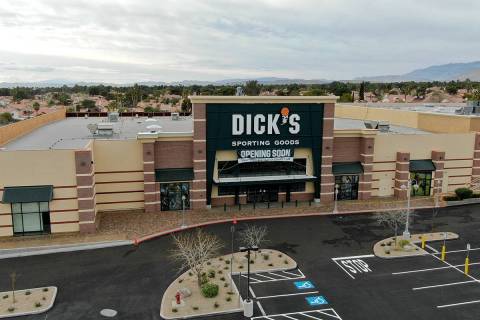