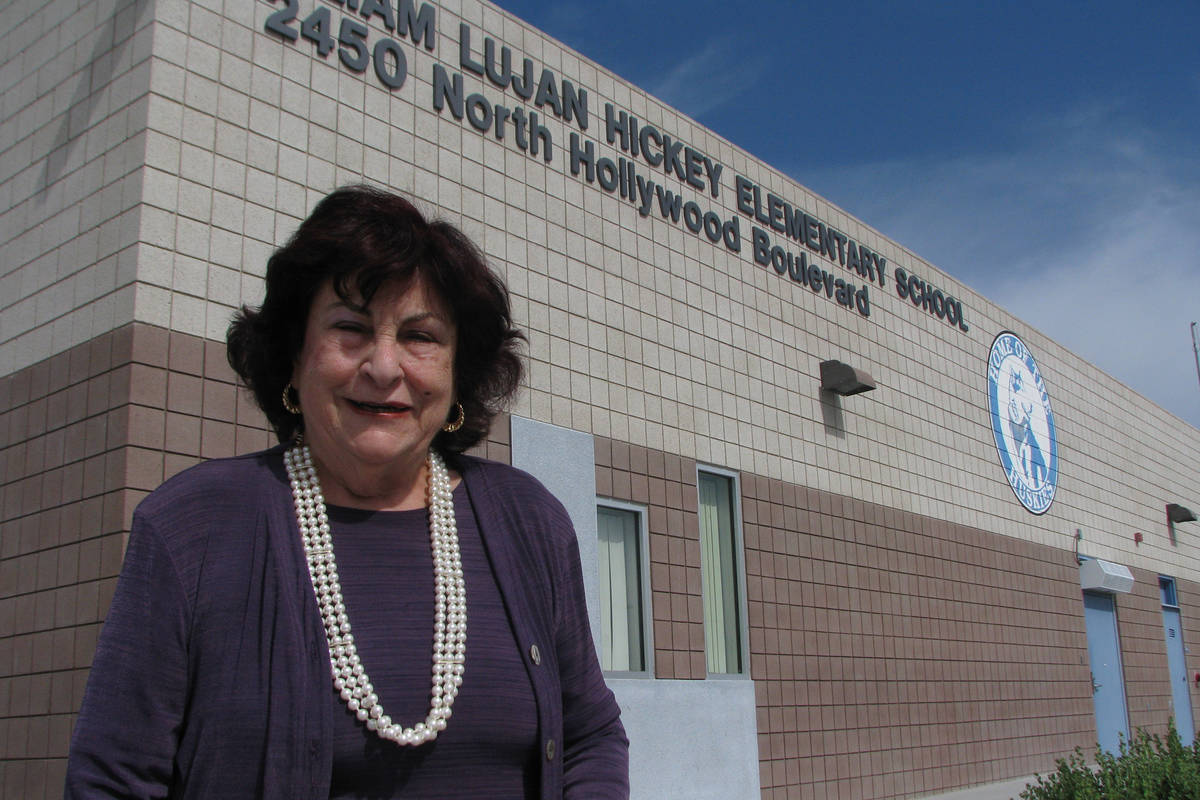 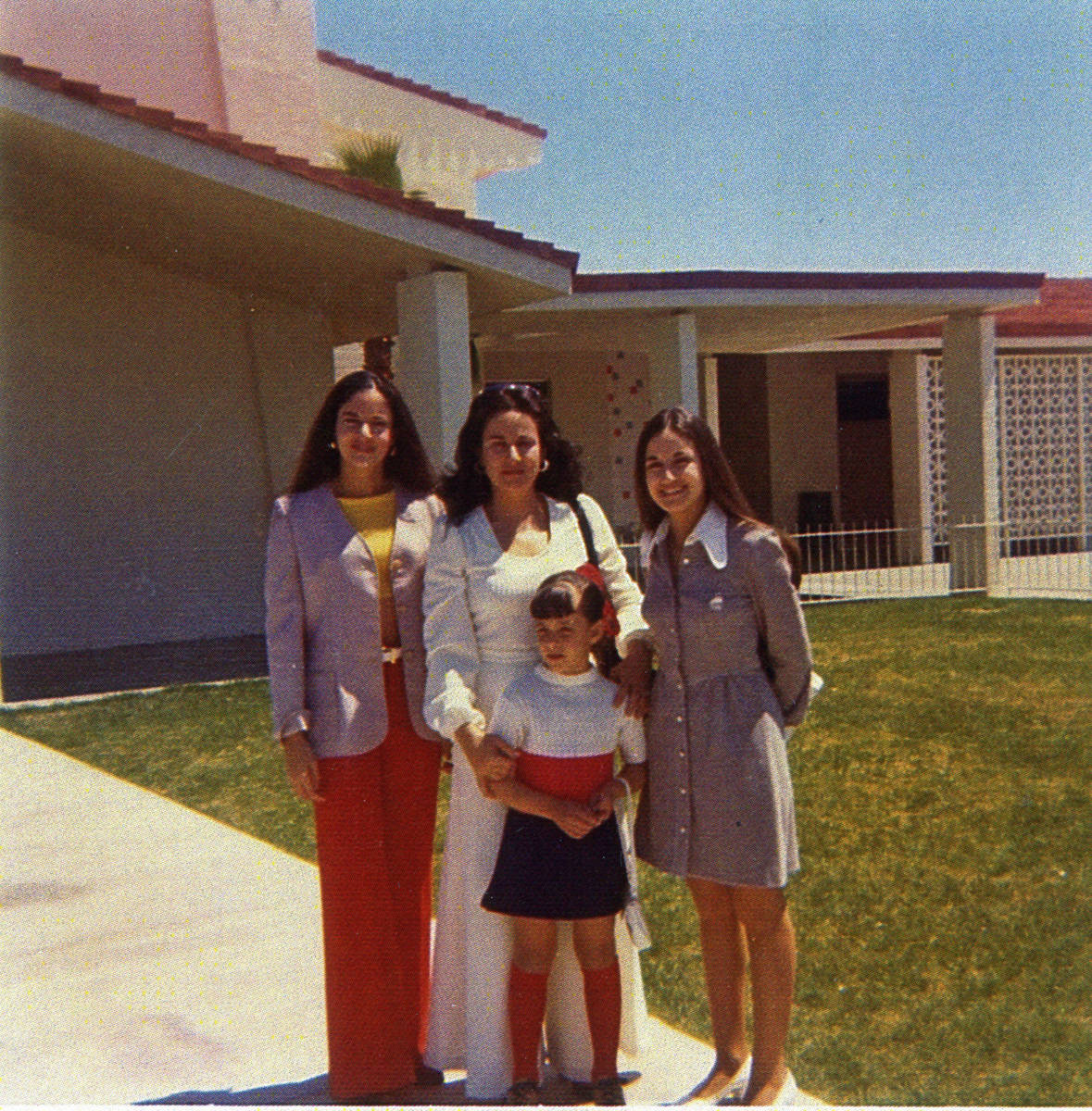 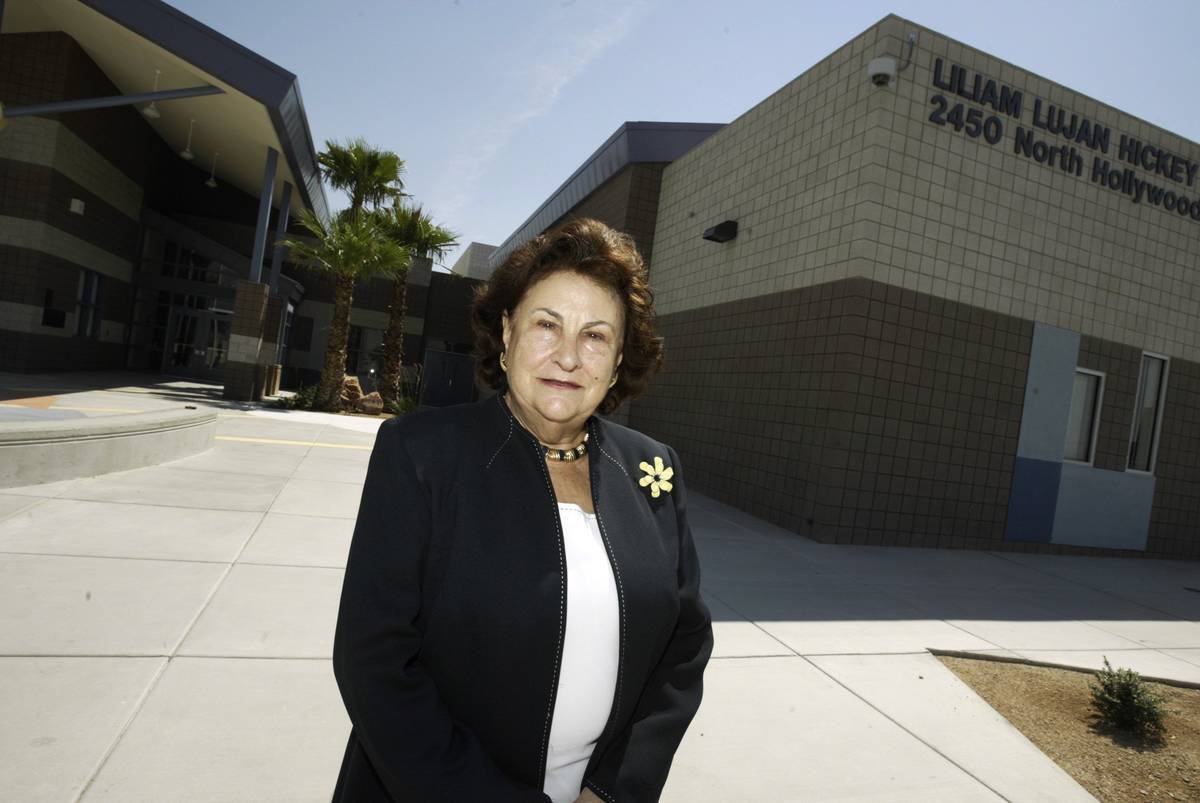 Liliam Hickey is pictured in front of the elementary school which bears her name in Las Vegas on Friday Aug. 12, 2005. (Las Vegas Review-Journal, file) 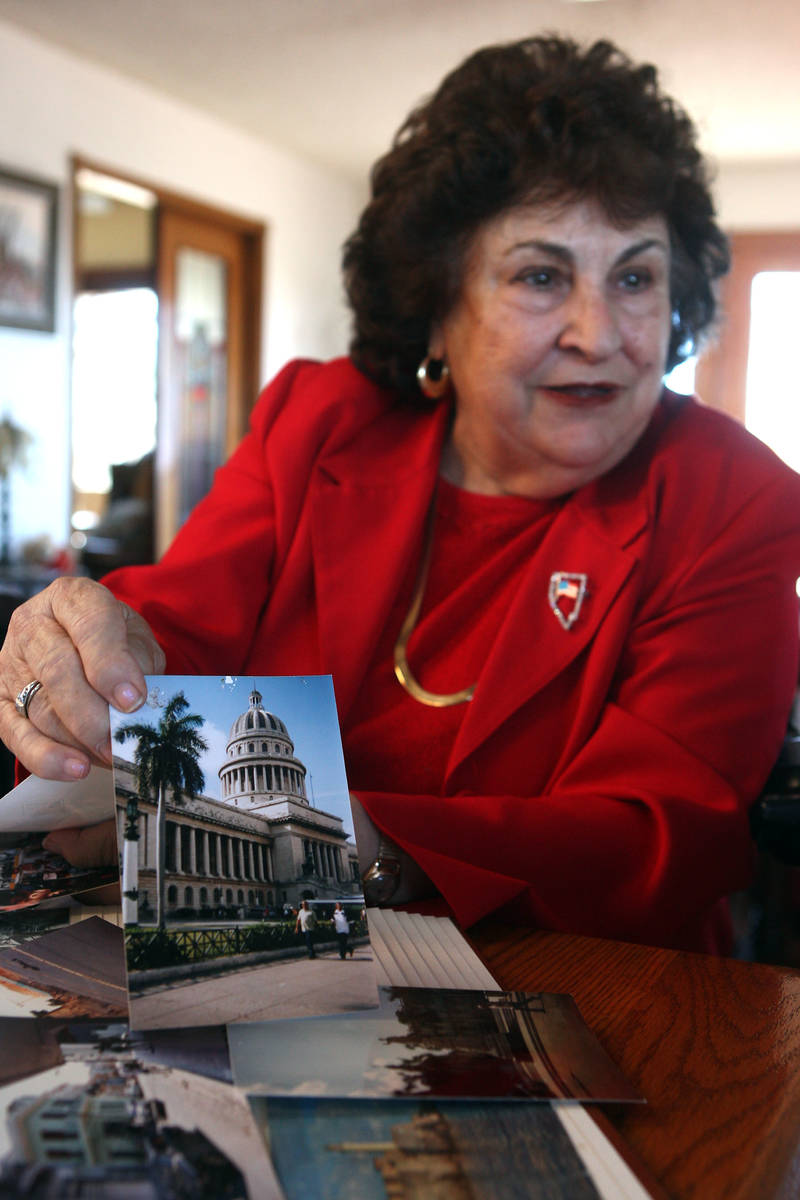 Liliam Lujan Hickey holds a photograph of the Capital Building in Havana, Cuba, while talking in her home Tuesday, Feb. 26, 2008, in Las Vegas. Hickey came to the U.S. as a Cuban refugee when she was 19. (Las Vegas Review-Journal, file) 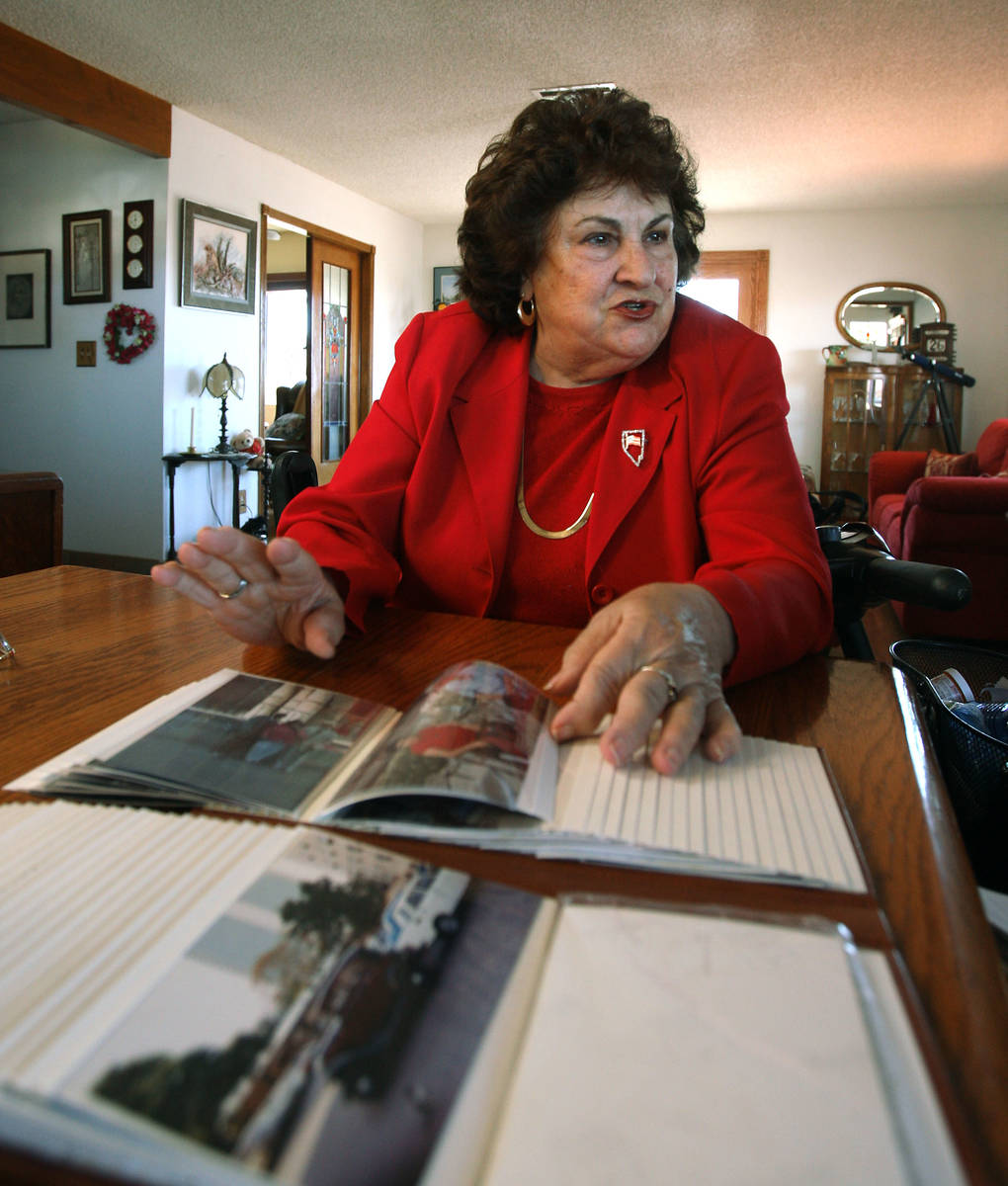 Liliam Lujan Hickey pages through photographs of Havana, Cuba, while talking in her home Tuesday, Feb. 26, 2008, in Las Vegas. Hickey came to the U.S. as a Cuban refugee when she was 19. (Las Vegas Review-Journal, file) 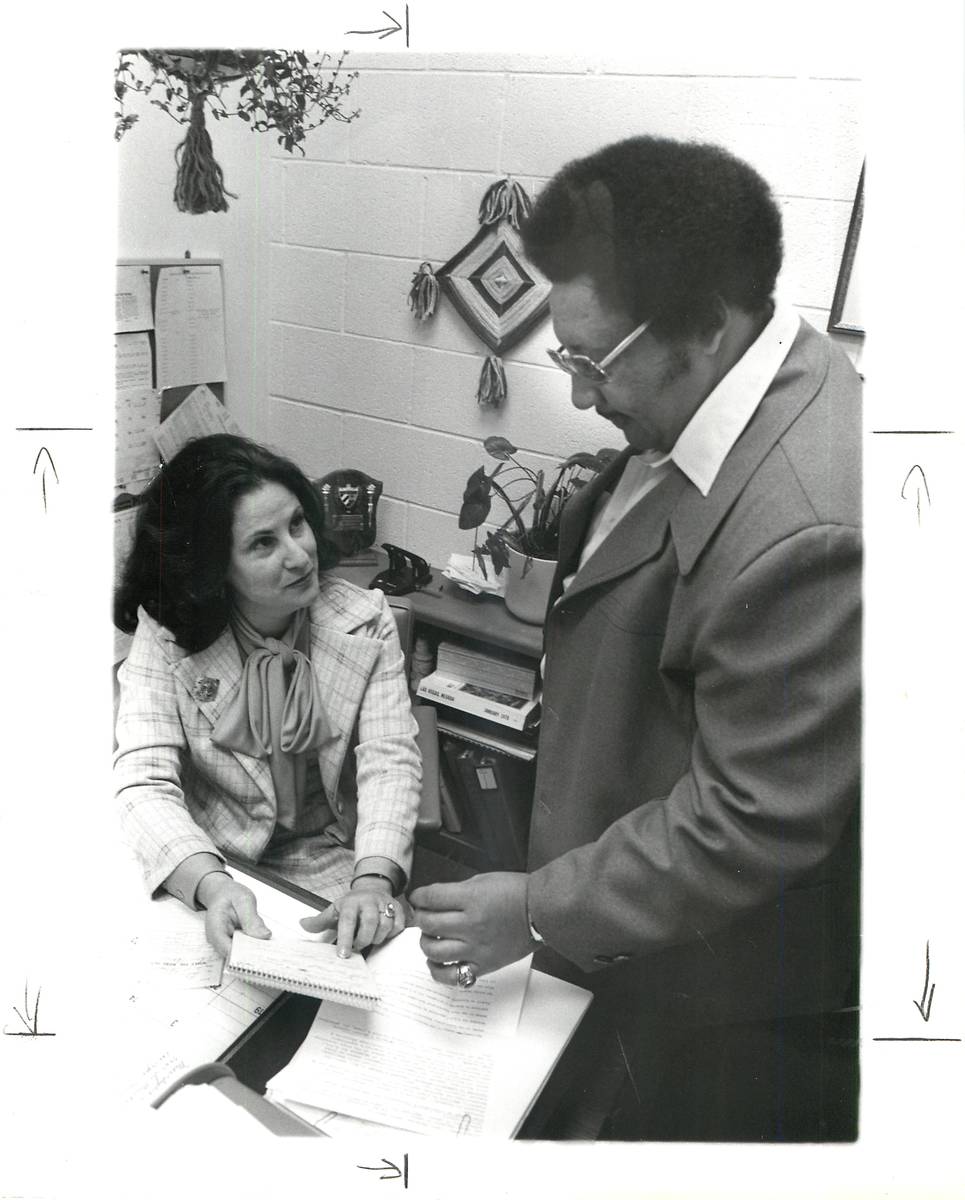 Educator Lilliam Lujan Hickey was the first Hispanic woman in Nevada elected to the State Board of Education, where she served from 1998 to 2000. She was born in Havana, Cuba in 1932 and arrived in Las Vegas, Nevada in 1964. She served on the local Latin Chamber of Commerce in the 1970s. Hickey became a member of the National Chamber of Commerce and was also a long standing member of the League of Women Voters, where she encouraged Hispanics to be more involved in Nevada politics. (Las Vegas Review-Journal, file)

Lujan Hickey was at her Las Vegas home when she died as a result of a stroke she suffered two weeks ago, her family confirmed to the Las Vegas Review-Journal.

Latin Chamber of Commerce President Peter Guzman said she laid the foundation for what the chamber is today.

“She made us all work harder, work better and really be confident about defending the rights of Latinos and Latinas,” Guzman said.

In a profile of Lujan Hickey by the Review-Journal in 2013, she reminisced about helping start Classrooms On Wheels, which brought school buses around the valley to provide educational programs to low-income families. During her 12 years on the Nevada State Board of Education, from 1989 to 2001, Lujan Hickey desired to have three schools next to each other in Sunrise Manor in hopes of building up the east valley neighborhood.

“I wanted to establish a community in that area,” Lujan Hickey said during the 2013 interview. “I call it my little village.”

Lujan Hickey was born in 1932 in Cuba, where she married Enrique Lujan and lived a lavish lifestyle owning casinos until 1960, when the family’s mafia ties and Fidel Castro’s rise to power clashed, she told the Review-Journal. Four years later, Lujan got a job at a casino in Las Vegas and moved his wife and three children to the expanding city, where they had their fourth and final child in 1967.

“She never cooked,” Shell, 70, said of her mother. “She didn’t like to read. She was a social butterfly, a mover and a shaker.”

Lujan Hickey’s first job in Las Vegas was at Catholic Charities, helping other Cuban refugees moving to the city. She later worked for the Nevada State Welfare Department, serving as a clerk and eventually being promoted to a supervisor.

In 1999, she received Good Housekeeping’s Women in Government award for her work with Catholic Charities to help refugees. She was honored at a ceremony in Washington D.C., according to a Review-Journal story at the time.

In 1981, Lujan Hickey married state lawmaker Tom Hickey, who served for 22 years in the Assembly and Senate.

Within months of Hickey’s 1994 retirement, Lujan Hickey was named as the third woman to lead the Latin Chamber of Commerce as president. She set a goal of making a better partnership between businesses and schools. She is credited with starting Career Day for the chamber.

Shell said her mother was notorious for Sunday morning brunches where, although Lujan Hickey didn’t do the cooking, she did invite dozens of notable politicians.

Former Sen. Harry Reid remembered her as the woman with a “wonderful family” who was involved in everything, with everybody.

“She was heavily involved in community affairs,” he said. “She was one of the first Hispanics to be noted as one of the stellar Latinos in Clark County area.”

“She participated in the political process and really cared about the community,” he said. “Everyone’s going to miss her. She was a real activist and a beautiful person.”