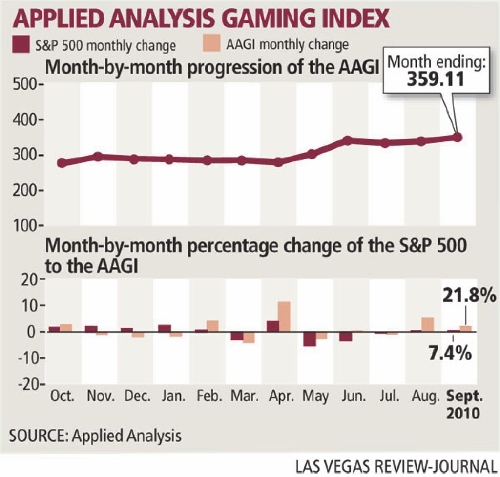 With two exceptions, the gaming sector had an upward bounce during September.

Eight of the 10 publicly traded casino operators and slot machine manufacturers that financial consultant Applied Analysis follows for its gaming index experienced increases in their average daily stock prices during the month.

The results helped the index achieve its highest level in nearly two years.

Brian Gordon, a principal in Applied Analysis, said investors are bullish on the prospects for casino operators with properties in Asia. The Strip, however, is still a worry.

"Capacity concerns in the Las Vegas market continue despite reported increases in visitor volumes as the competitive environment remains heated," Gordon said in a report to the firm’s clients.

For example, Boyd Gaming Corp., which operates in Las Vegas and regional markets, was the only casino operator to see its average daily stock price decline during September. The company’s shares were down 7.6 percent on an average daily basis during the month.

Meanwhile, the average daily stock price of Las Vegas Sands Corp. was credited with giving the index a boost. Shares of the casino operator were up almost 13 percent on an average daily basis in September. The index on a whole rose almost 10 points to 359.11.

Penn National Gaming, which saw its average daily stock price increase 5.54 percent during September, opened a slot machine-only casino in Maryland during the month, the state’s first casino. The $97.5 million property has 1,500 machines and was unveiled nearly two years after residents approved slot machine casinos in the state.

Pinnacle Entertainment, which saw its average daily stock price climb 5.5 percent in September, unveiled plans for a $357 million hotel-casino complex in Baton Rouge, La., which would be the company’s fourth casino in the state.

Slot machine giant International Game Technology was the only other company in the index to see a decline in its average daily stock price during September.