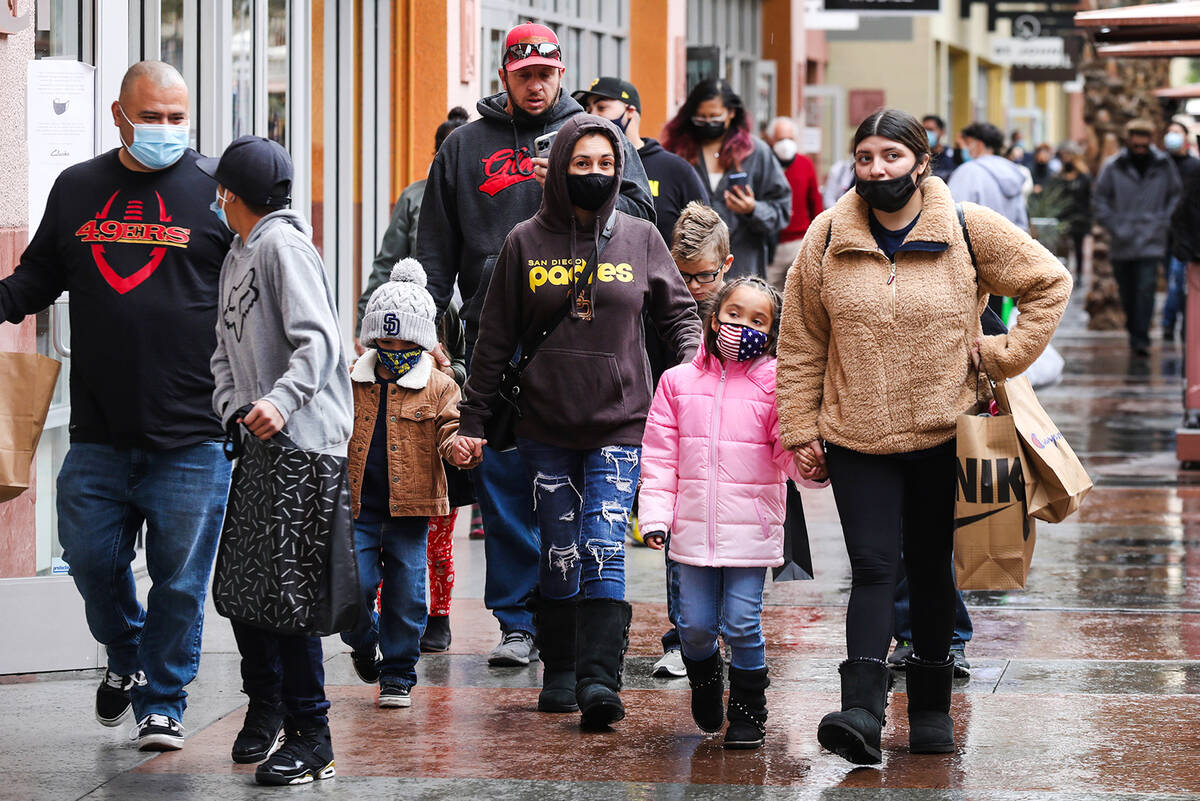 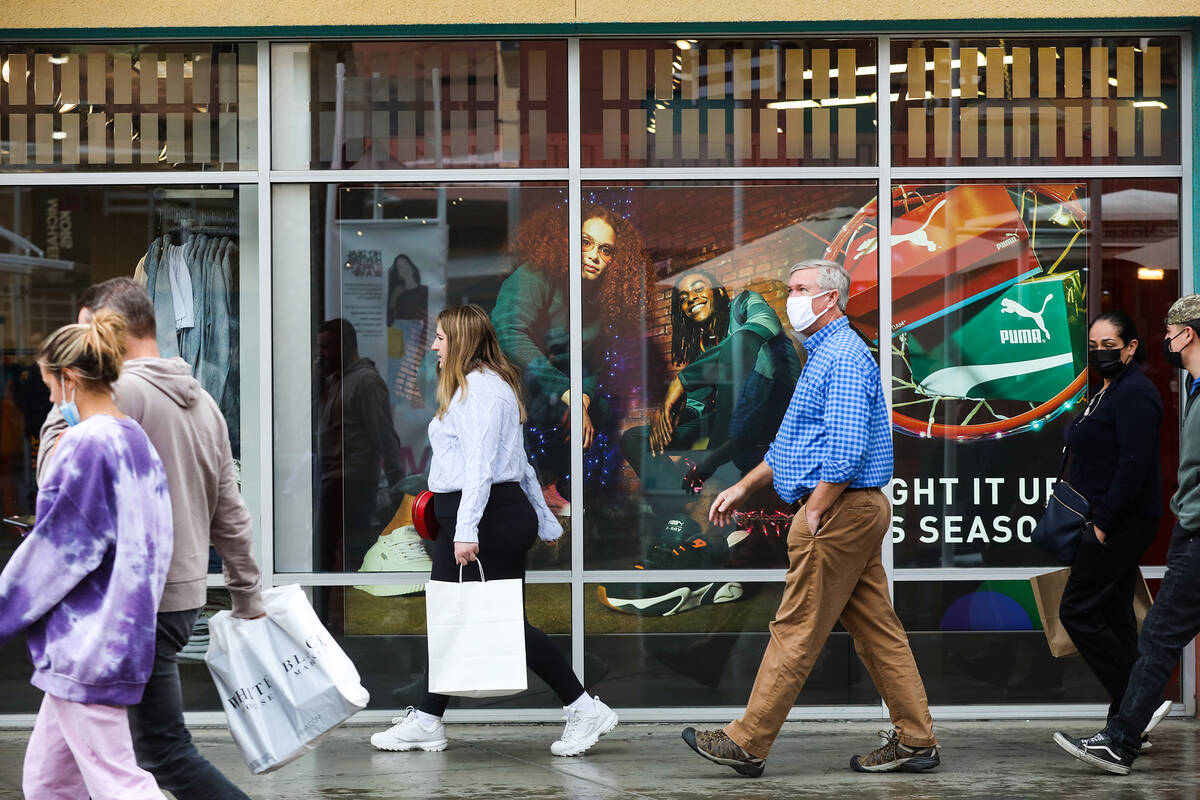 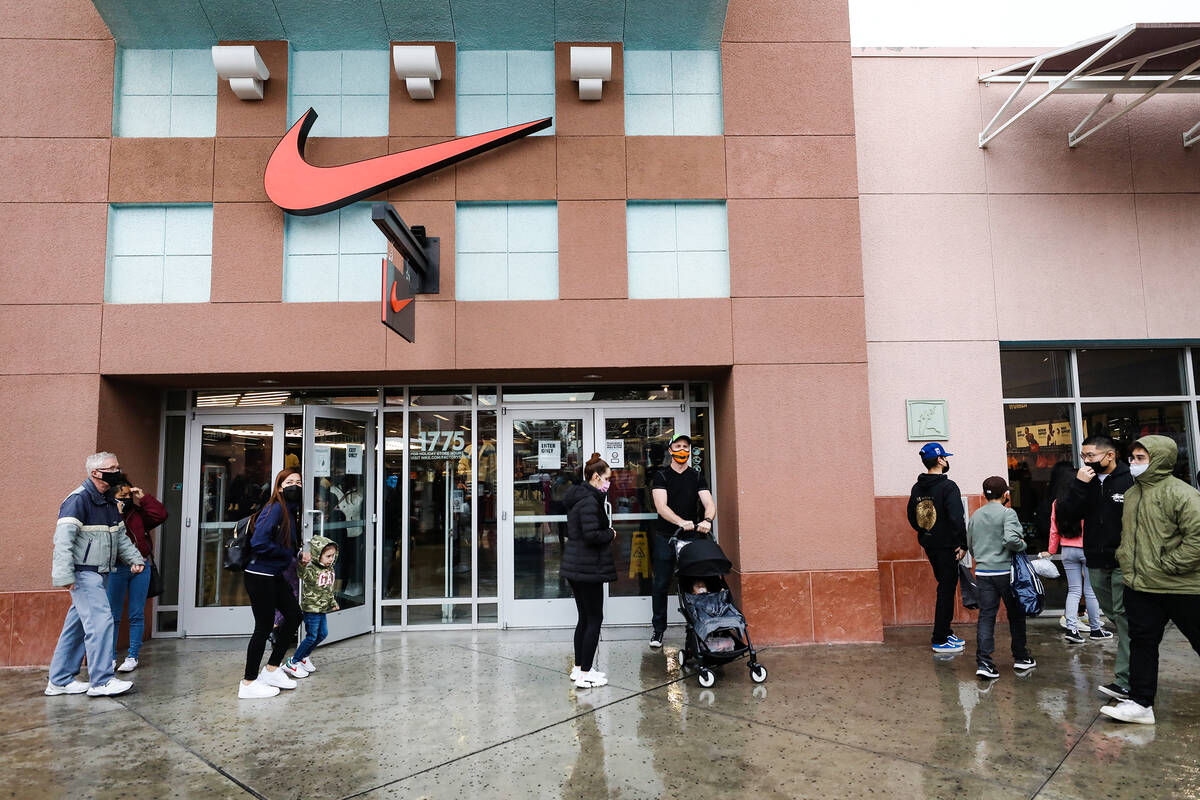 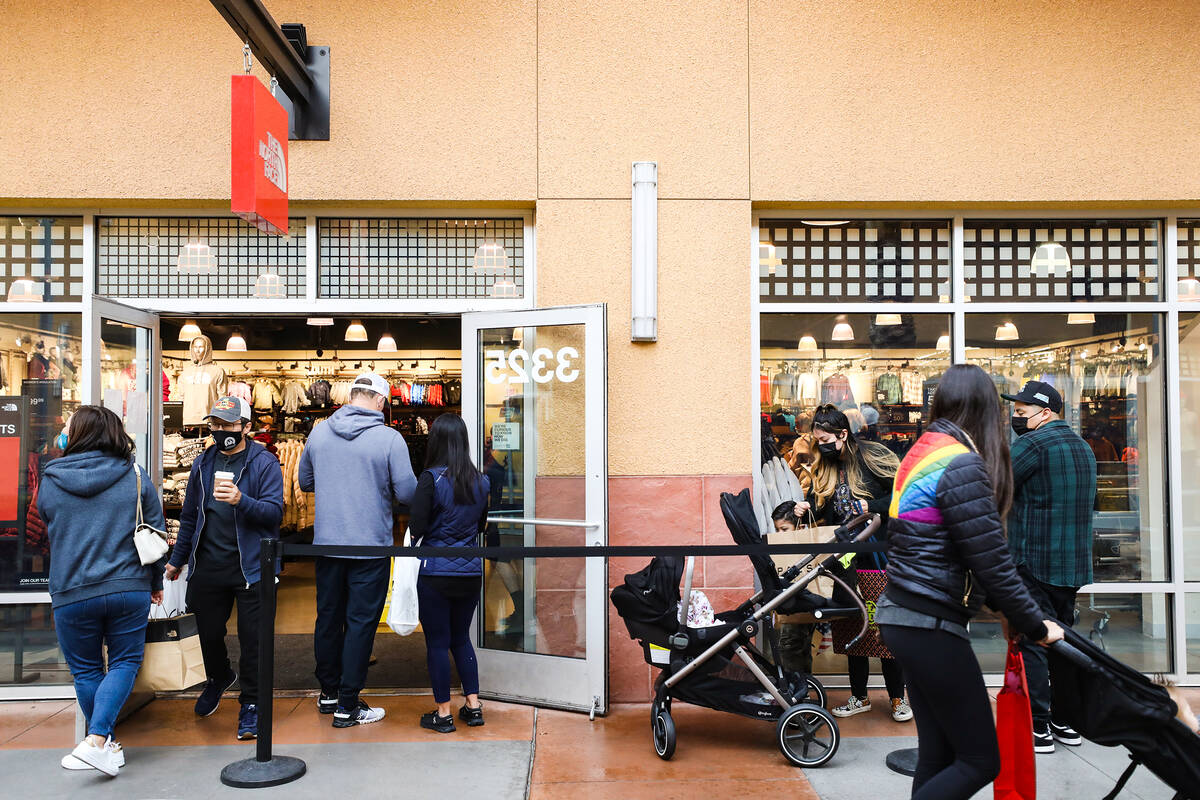 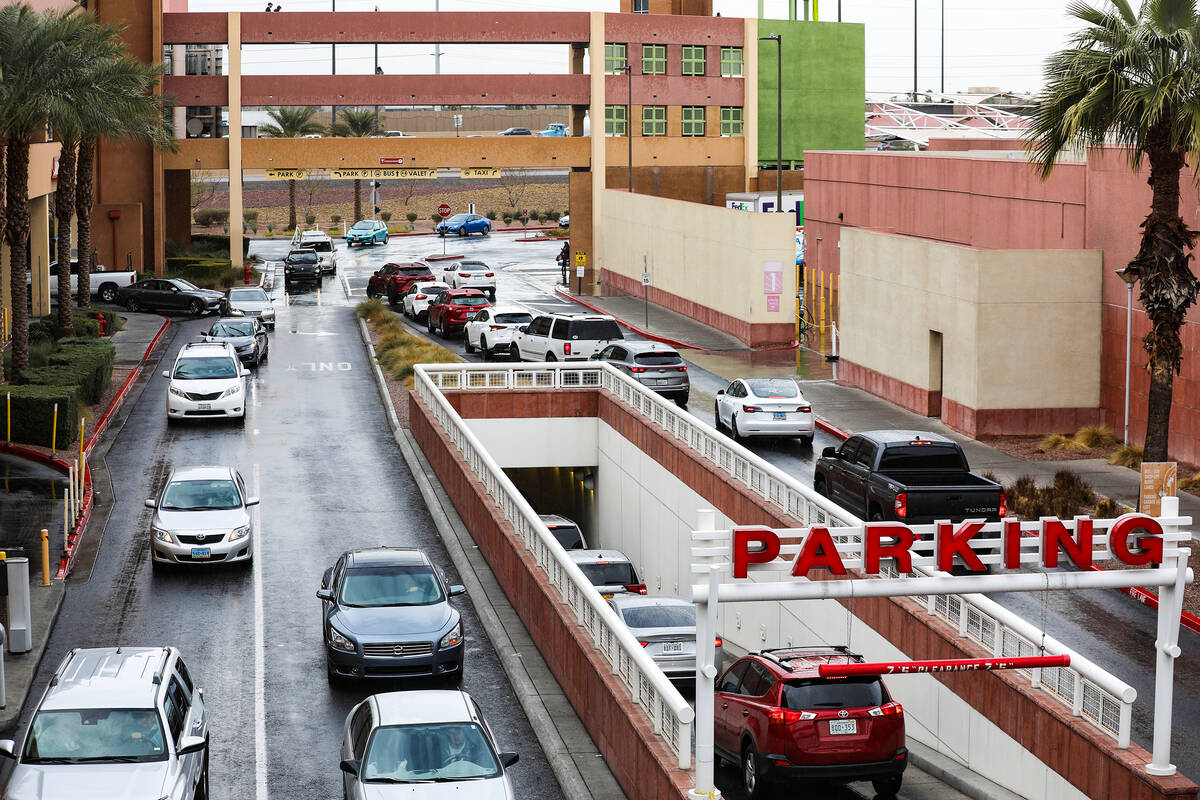 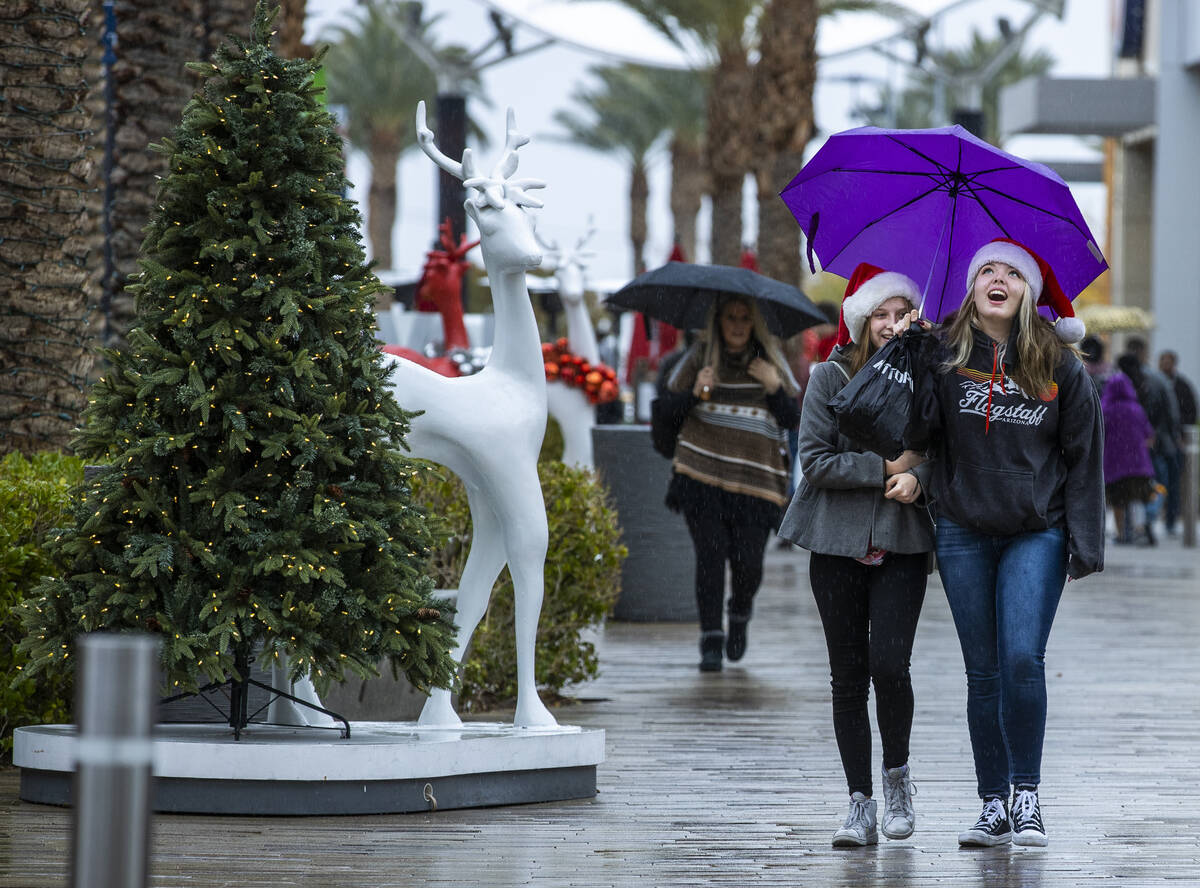 (From left) Shoppers Miranda Kerr and Milan Turley walk along in the rain during some last minute shopping at Downtown Summerlin on Thursday, Dec. 23, 2021, in Las Vegas. (L.E. Baskow/Las Vegas Review-Journal) @Left_Eye_Images 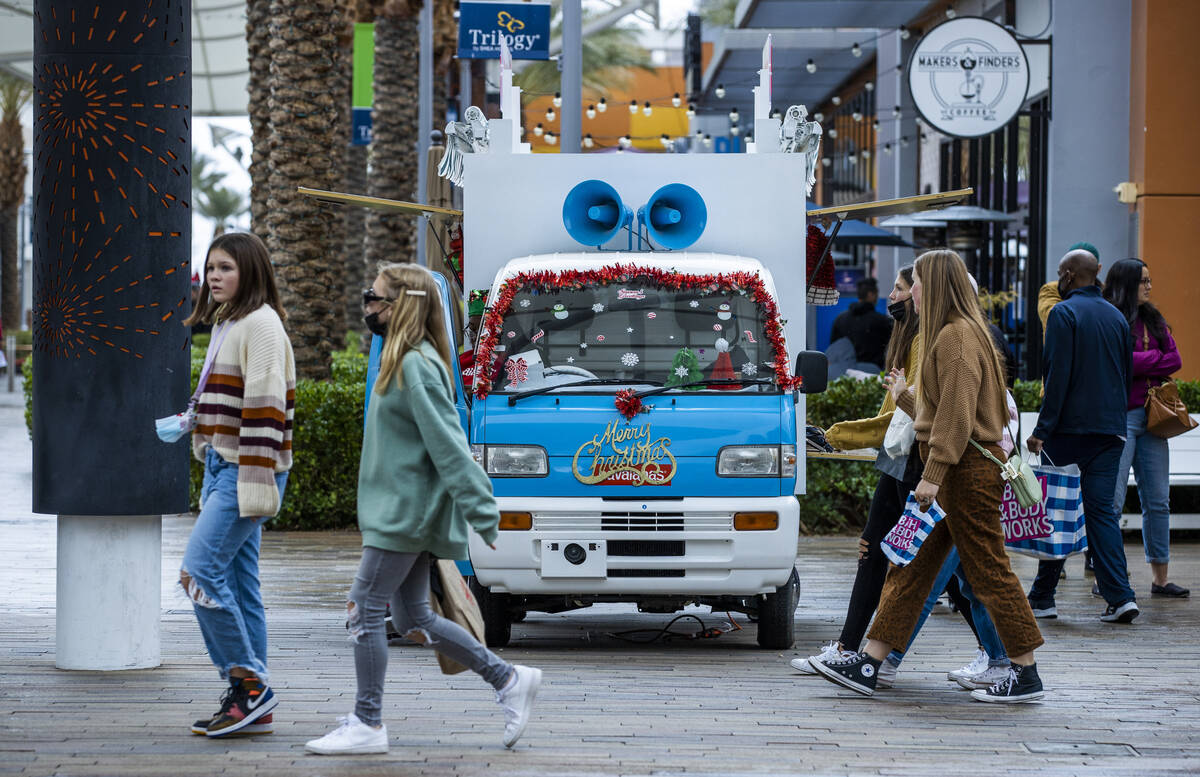 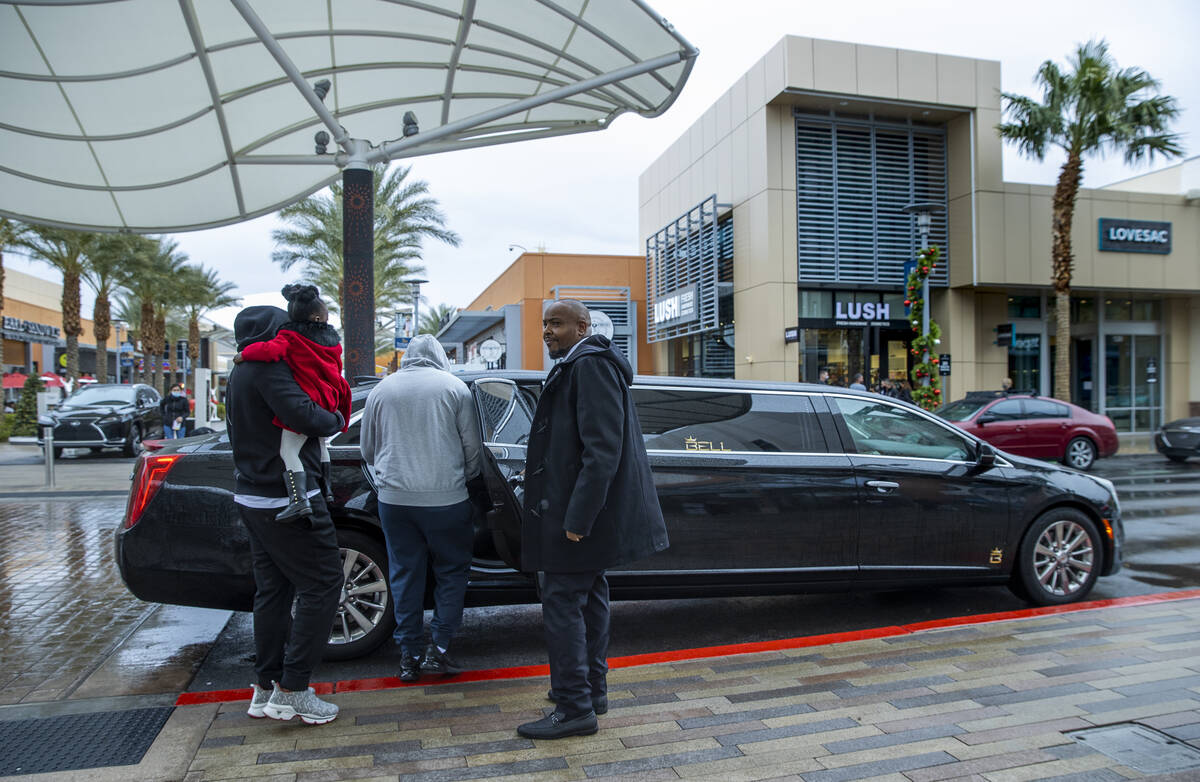 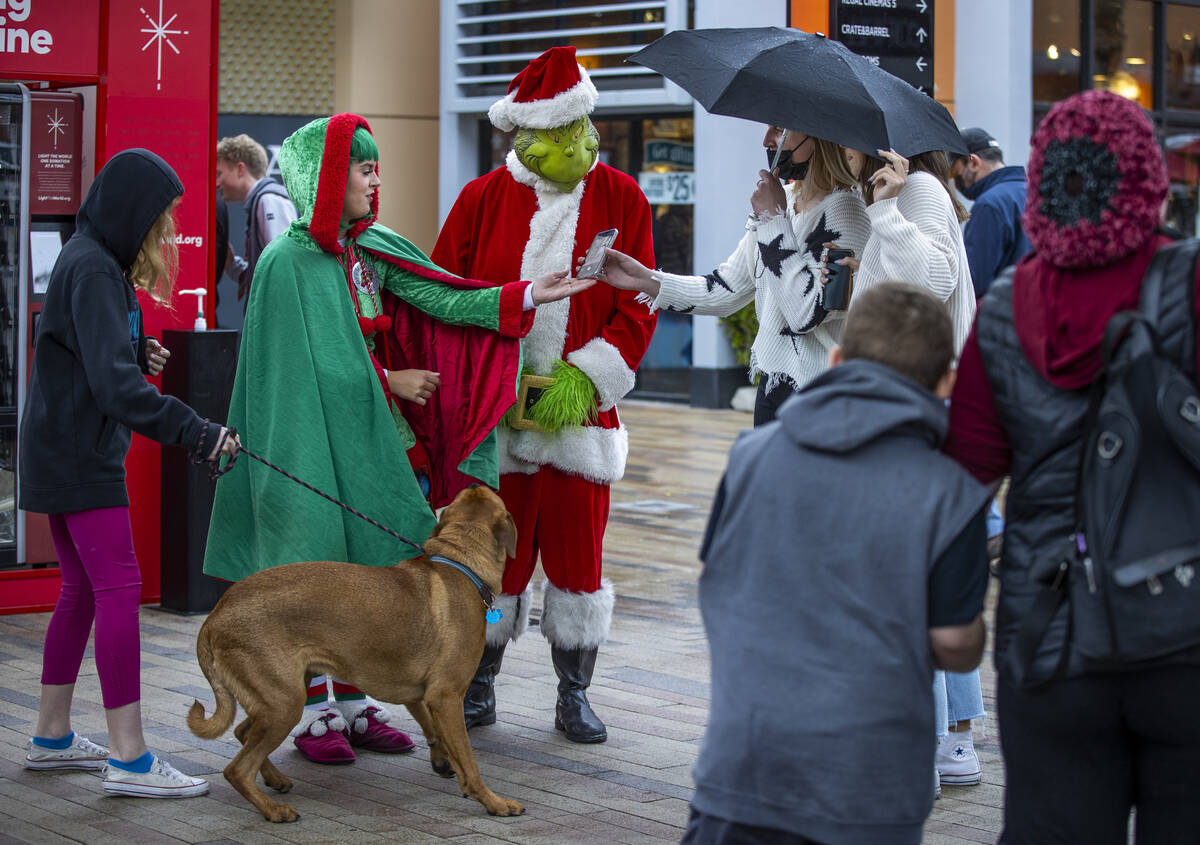 The Grinch and his helper entertain shoppers in the rain during some last minute shopping at Downtown Summerlin on Thursday, Dec. 23, 2021, in Las Vegas. (L.E. Baskow/Las Vegas Review-Journal) @Left_Eye_Images 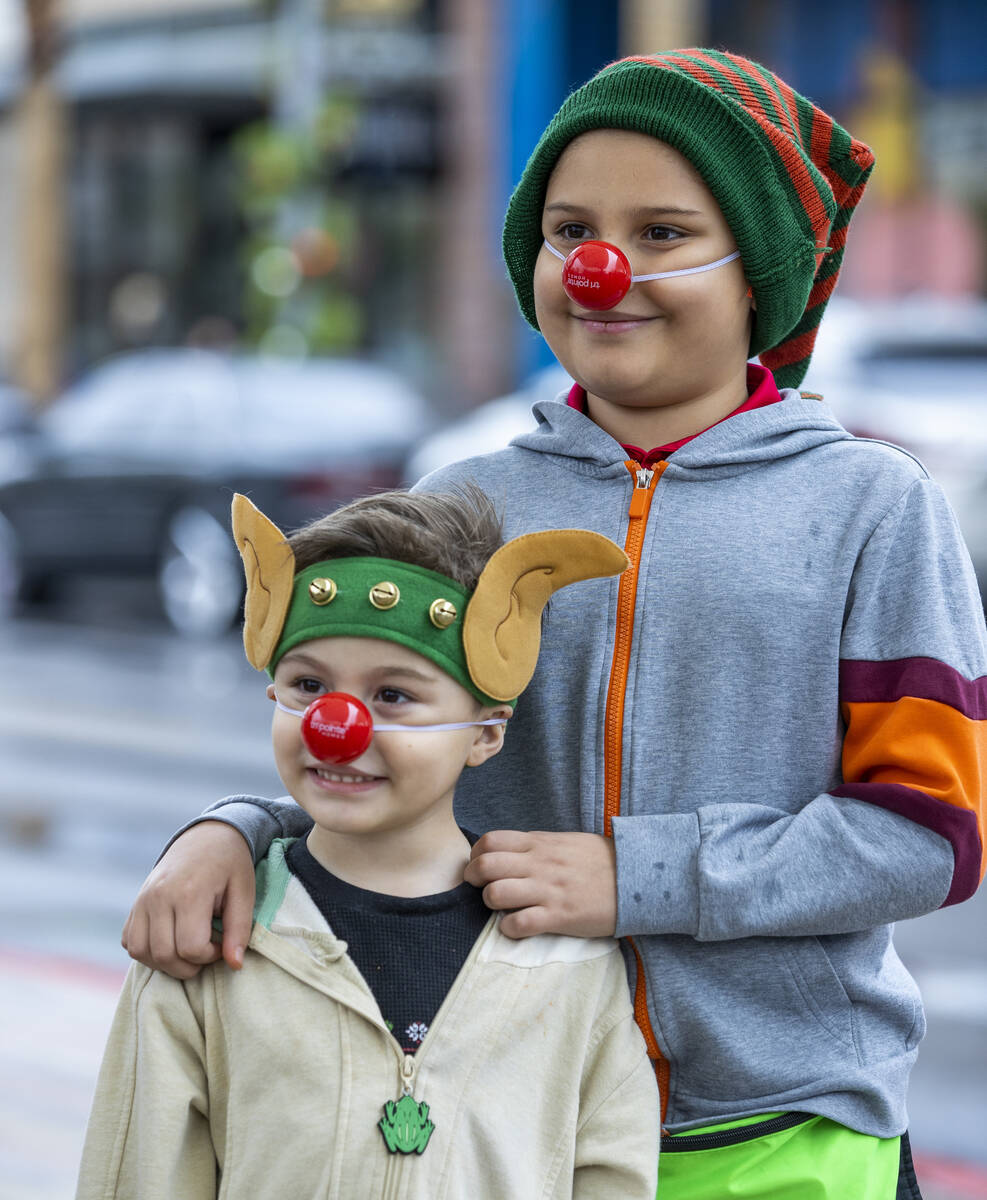 (From top) Brighton, 11, and Anakin Galore, 5, are dressed for a Santa visit during some last minute shopping at Downtown Summerlin on Thursday, Dec. 23, 2021, in Las Vegas. (L.E. Baskow/Las Vegas Review-Journal) @Left_Eye_Images 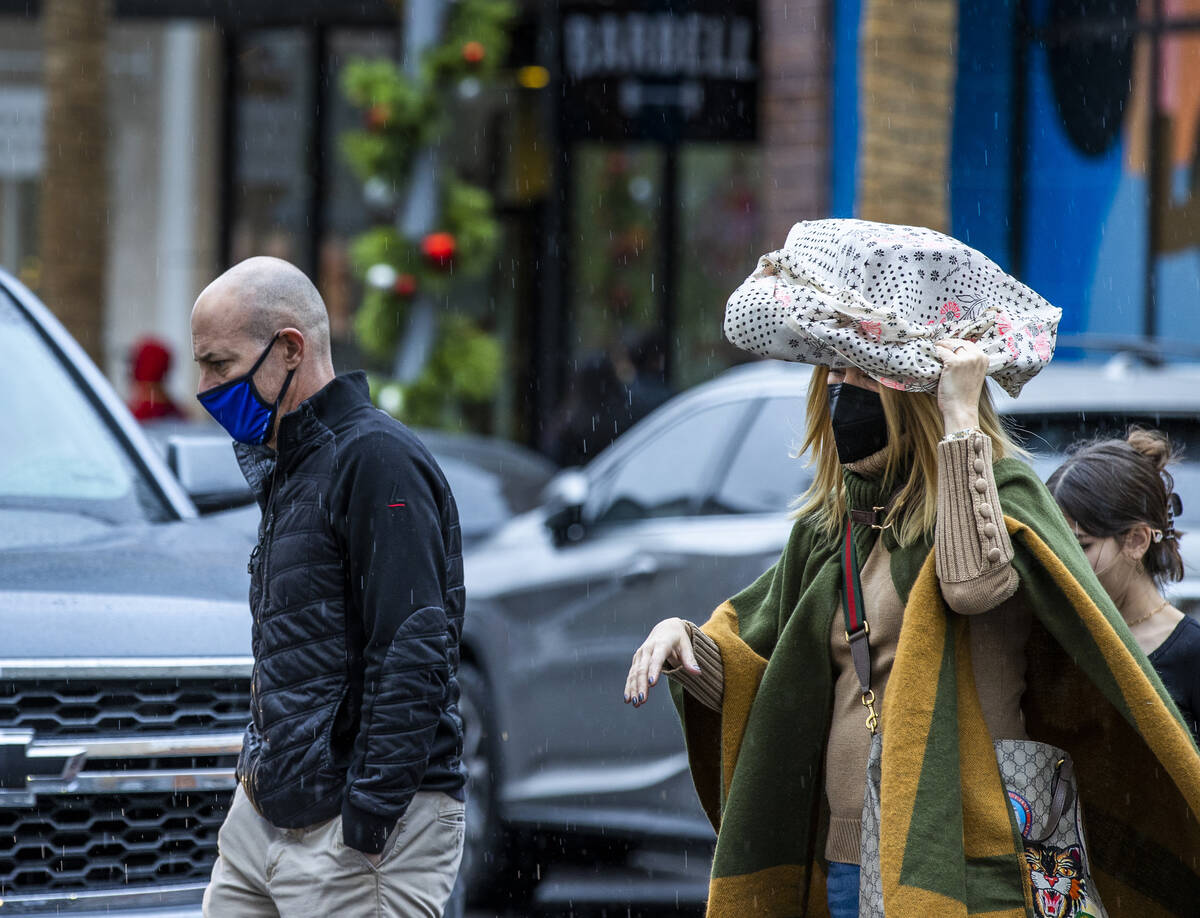 Shoppers walk along in the rain during some last minute shopping at Downtown Summerlin on Thursday, Dec. 23, 2021, in Las Vegas. (L.E. Baskow/Las Vegas Review-Journal) @Left_Eye_Images 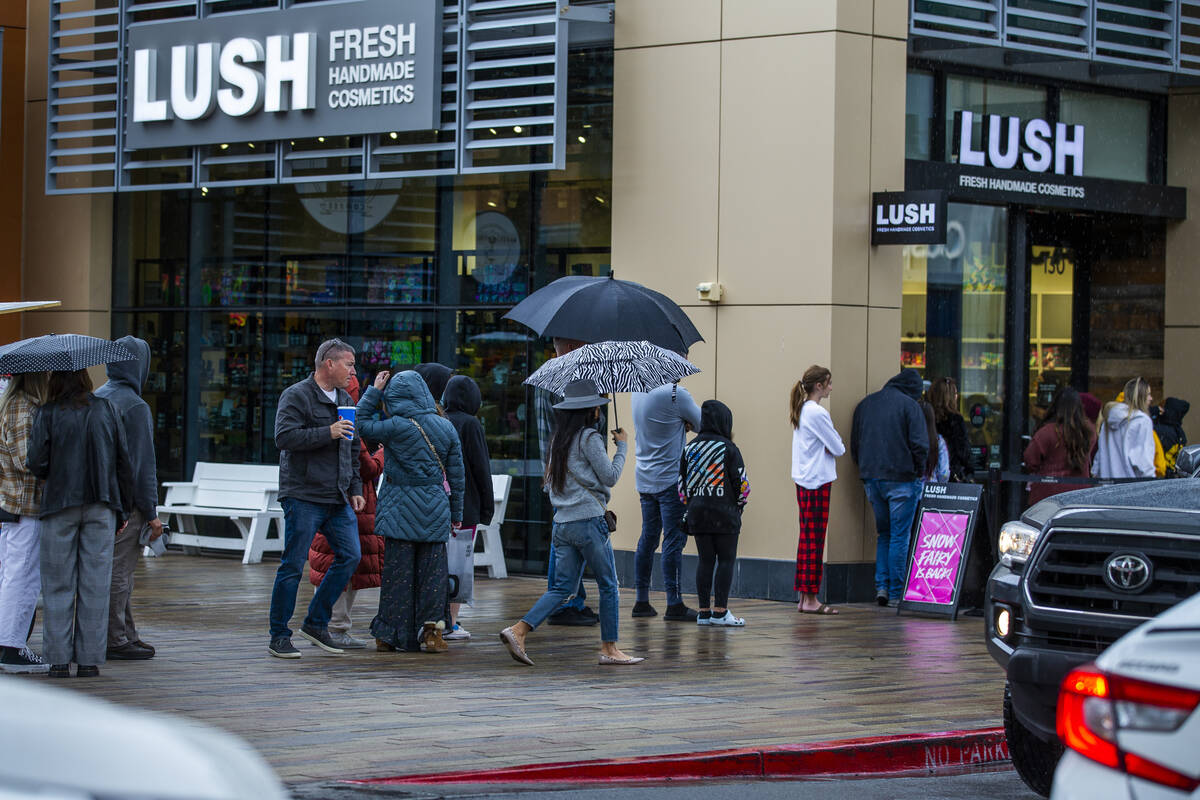 Shoppers stand in line to get into Lush during some last minute shopping at Downtown Summerlin on Thursday, Dec. 23, 2021, in Las Vegas. (L.E. Baskow/Las Vegas Review-Journal) @Left_Eye_Images 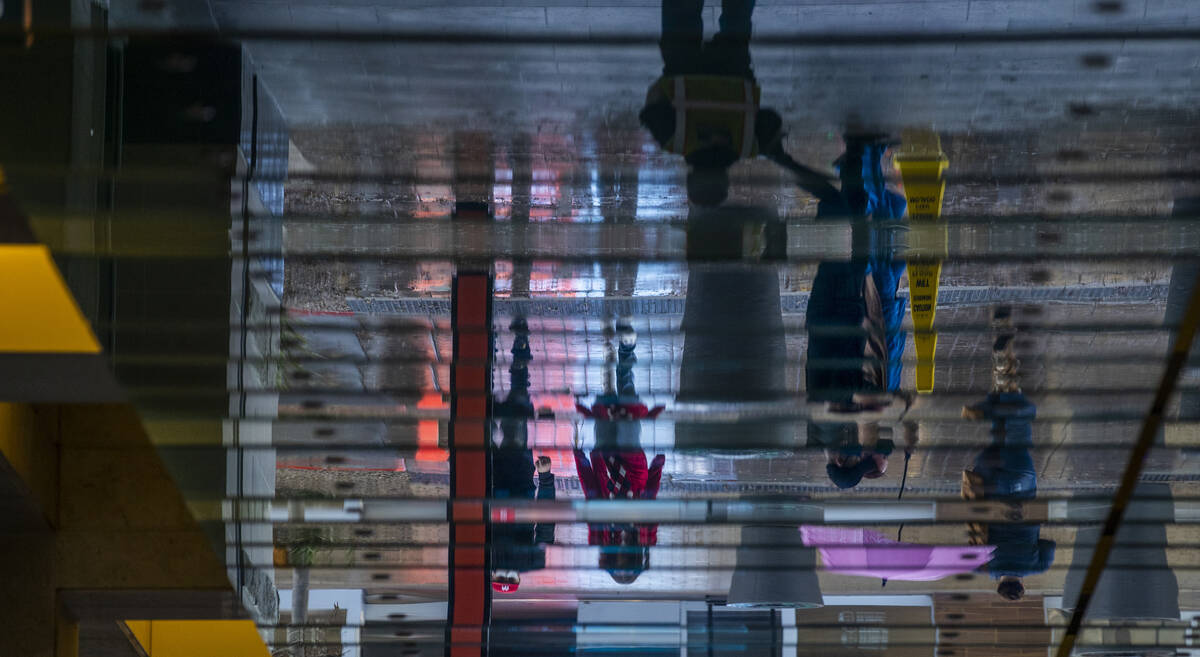 Shoppers, reflected in ceiling metal, walk along in the rain during some last minute shopping at Downtown Summerlin on Thursday, Dec. 23, 2021, in Las Vegas. (L.E. Baskow/Las Vegas Review-Journal) @Left_Eye_Images

Thursday’s rain may have ruined Miran Turley’s plans to go ice skating, but it didn’t keep her from shopping at Downtown Summerlin.

“I have to do last-minute Christmas shopping,” Turley said, adding that she was shopping for her parents. “Parents — that’s the hardest part for me. I don’t really know what to get.”

Hundreds of shoppers flocked to Downtown Summerlin to squeeze in some last-minute holiday shopping while others saw it as a chance to meet Santa and enjoy extra time with family.

Brighton, 11, and Anakin Valore, 5, had just finished taking pictures with Santa Claus, who has his own mini chalet at Macy’s Promenade. Their father, Lance, said it was the first time the family took Santa photos at Downtown Summerlin.

“We love the area and we moved nearby and had to get Santa photos, of course,” he said.

Valore said their visit was also a chance for the family to get outside and snag the last few gifts on his list.

“Kids are pretty much covered so just my wife and some stocking stuffers,” he said.

Research firm The NPD Group said that even though its survey found more than a third of shoppers started buying gifts in October, many shoppers were waiting until the last week before Christmas — which includes Super Saturday, known as the last shoppable Saturday before Christmas — to get started.

“Headlining retail headwinds, such as early-season shopping, supply issues, and diminishing deals, have not stifled sales,” Marshal Cohen, chief retail industry advisor for The NPD Group, said in a statement. “Rather, Super Saturday Week’s marginal revenue growth over pre-pandemic levels demonstrates the return to more normal sales results as consumers continue to elevate their purchase investment. Overall, these are positive indicators for retailers heading into the final full week of shopping leading up to Christmas.”

Marko Gamez clutched a new skateboard deck in one hand and a shopping bag in the other. He had one last gift to purchase in Downtown Summerlin before calling it a day — “just a nice whiskey for my dad.”

He said that last year most of his gift shopping was done online so he was able to finish earlier, but this year he’s opted to shop in-store, purchasing gifts for his siblings and even his tattoo artist.

“I’m trying to spend more to be honest. I like giving,” Gamez said. “It’s like when parents say they don’t really want anything when they get older — same thing (for me). I’d rather give.”

Jen Jenkins was on her way to visit the Apple store after purchasing a few items for herself at Express.

“We got all our gifts already so we’re just shopping for fun with our family,” Jenkins said. The newlywed said her partner was shopping at the clothing store Torrid with her mother-in-law.

“I think this year is the earliest I’ve ever finished Christmas shopping ever,” Jenkins said.

Meanwhile, long lines for last-minute holiday gift buying greeted shoppers before they even set foot at the Las Vegas North Premium Outlets on Wednesday, as consumers hoped to tick off their present lists before Christmas.

Queues of cars crept as far back as the nearby I-15 overpass to get into the parking lots at the mall near downtown Las Vegas. It mirrored the scene inside the mall, where big brand stores including Nike, The North Face and Burberry had lines of shoppers both in and inside the shops.

Las Vegas resident Yahir Demha was shopping for last-minute gifts for his family after finishing his shift at clothing retailer Polo. He said the mall has been “really packed, especially in the last few days.”

Demha said he noticed many families shopping together and the return of many foreign tourists shopping. The U.S. lifted its travel ban on most other countries in early November.

San Francisco resident Wesley Brown said he had been shopping for about three hours on Wednesday. He was surprised by how many amenities and stores were open in Las Vegas compared with California. Still, he thought the city was less crowded than expected.

Hawaii resident Jordan Liusa was shopping with her family and noticed the mall’s activity, particularly while she waited to pay for a wallet and purse at Michael Kors. The stores appeared well-stocked, she said.

“There was a lot of variety to pick from,” Liusa said.

Las Vegas resident Tiffany Miller stopped at the outlets Wednesday to pick up Alex and Ani jewelry and gift cards from the Disney store for an upcoming family trip to Disneyland.

Miller said the outlets appeared more busy compared with traditional malls and noted she based her belief on a trip to Town Square on Tuesday night and a conversation with her son, who works at the outlet mall’s southern location.

“The outlet malls seem to be picking up business,” Miller said.