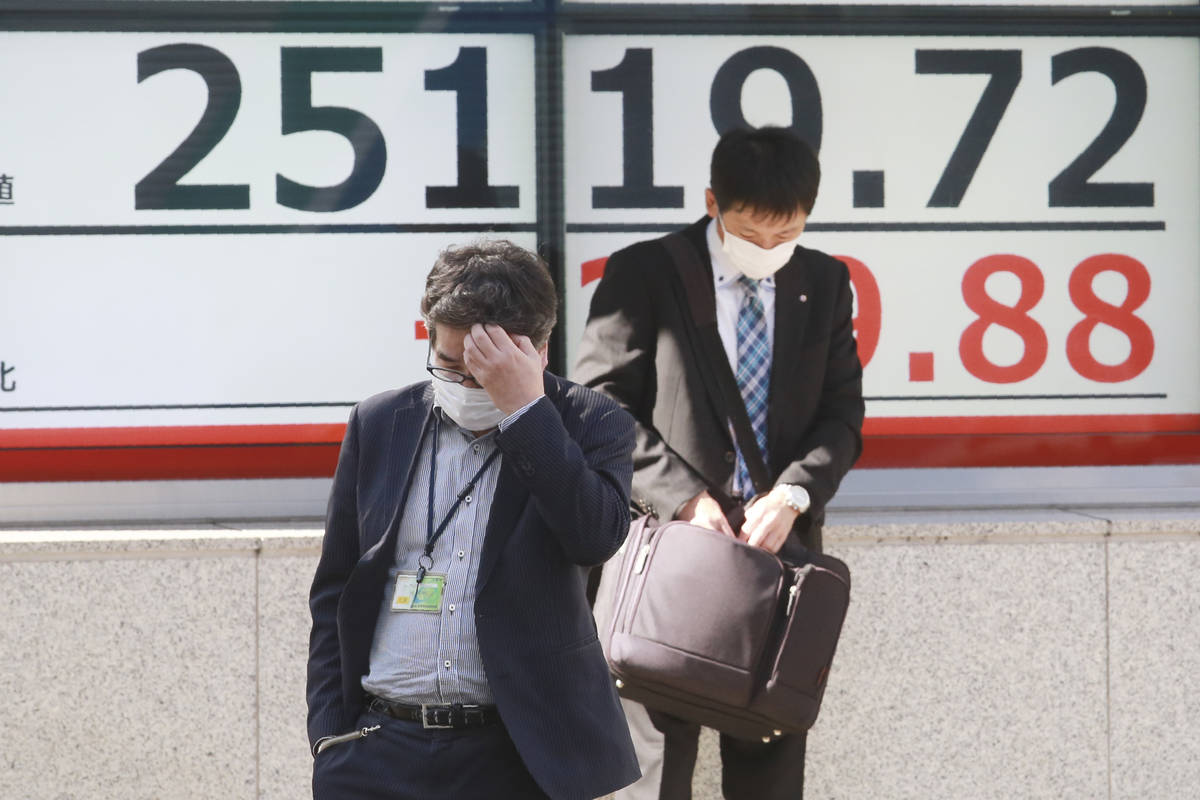 People walk by an electronic stock board of a securities firm in Tokyo, Tuesday, Nov. 10, 2020. Asian stock markets rose for second day Tuesday on hopes for progress toward a possible coronavirus vaccine that might allow the world to revive manufacturing, shopping and normal life. (AP Photo/Koji Sasahara) 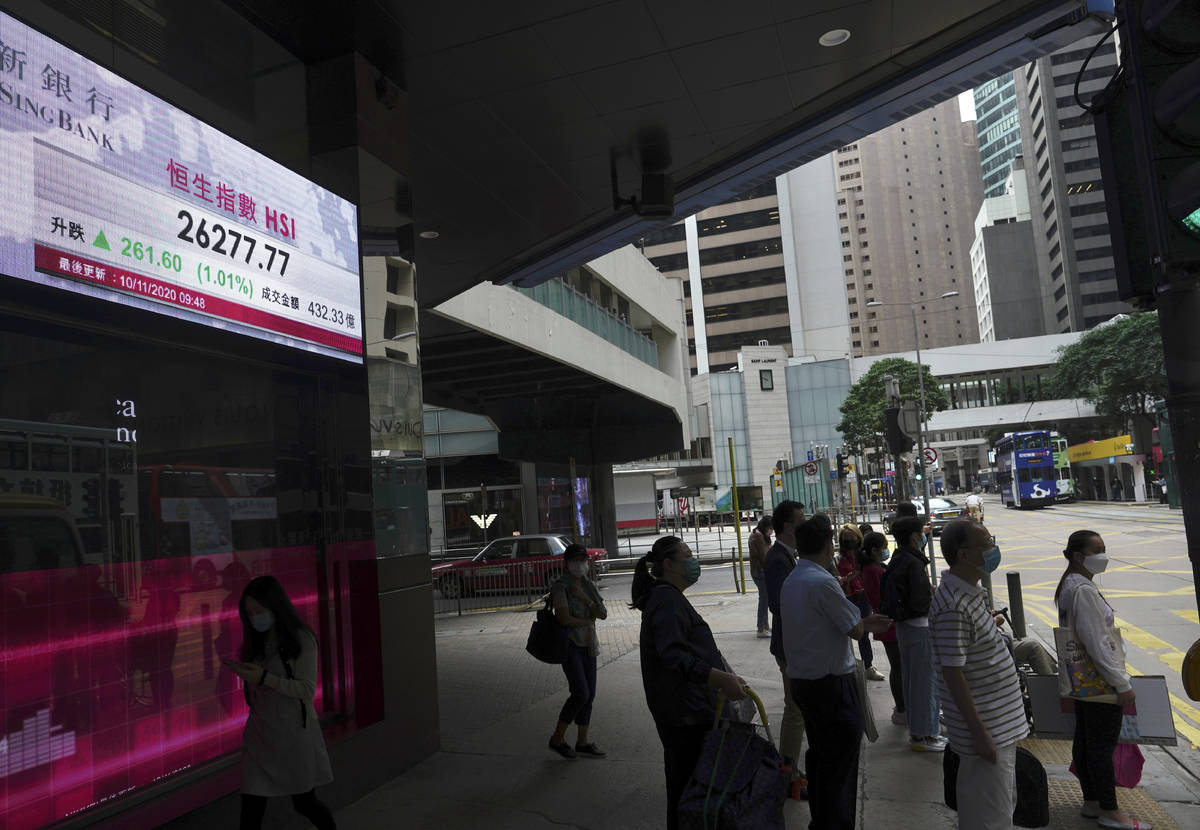 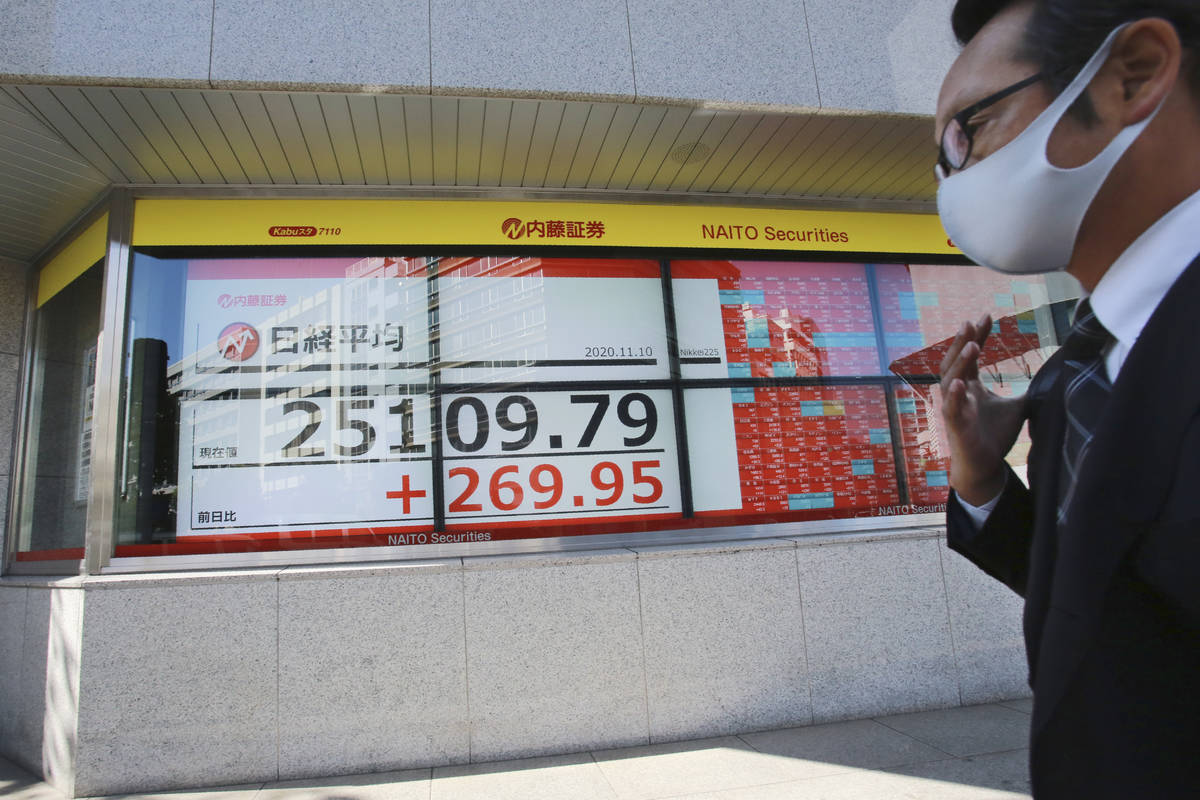 A man walks by an electronic stock board of a securities firm in Tokyo, Tuesday, Nov. 10, 2020. Asian stock markets rose for second day Tuesday on hopes for progress toward a possible coronavirus vaccine that might allow the world to revive manufacturing, shopping and normal life. (AP Photo/Koji Sasahara) 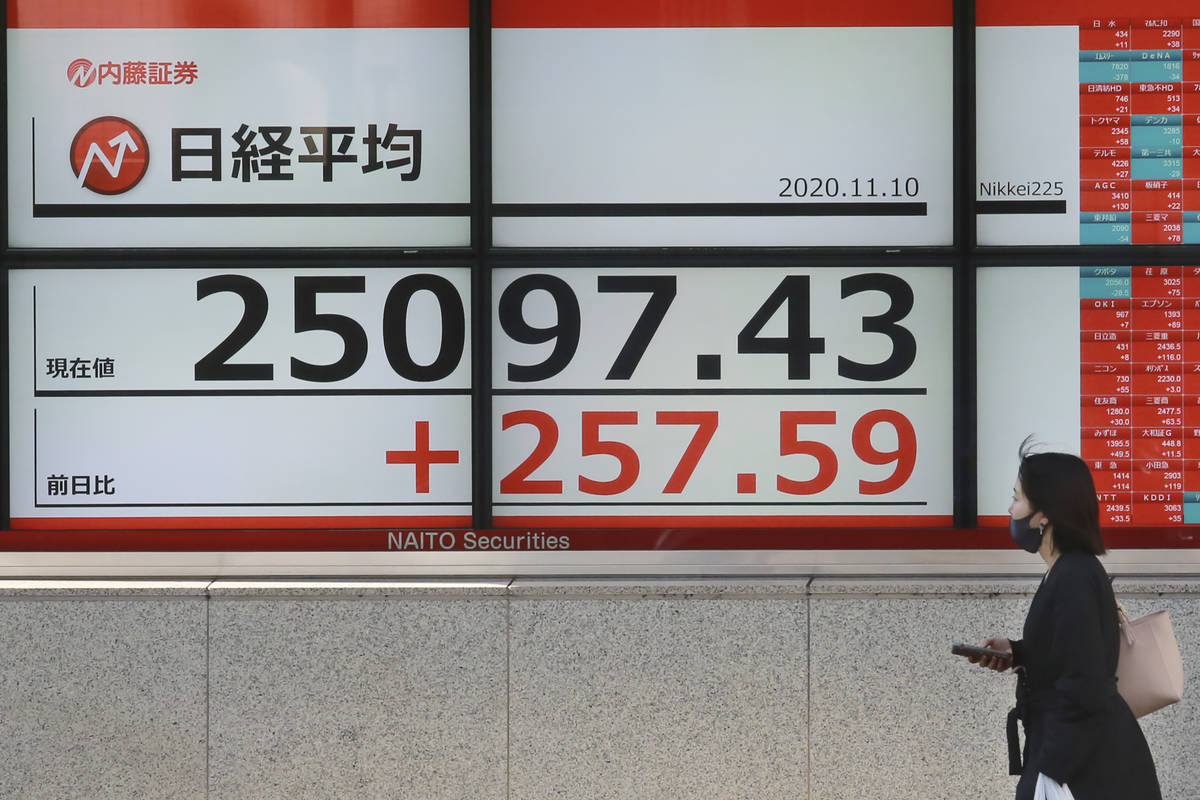 A woman walks by an electronic stock board of a securities firm in Tokyo, Tuesday, Nov. 10, 2020. Asian stock markets rose for second day Tuesday on hopes for progress toward a possible coronavirus vaccine that might allow the world to revive manufacturing, shopping and normal life. (AP Photo/Koji Sasahara) 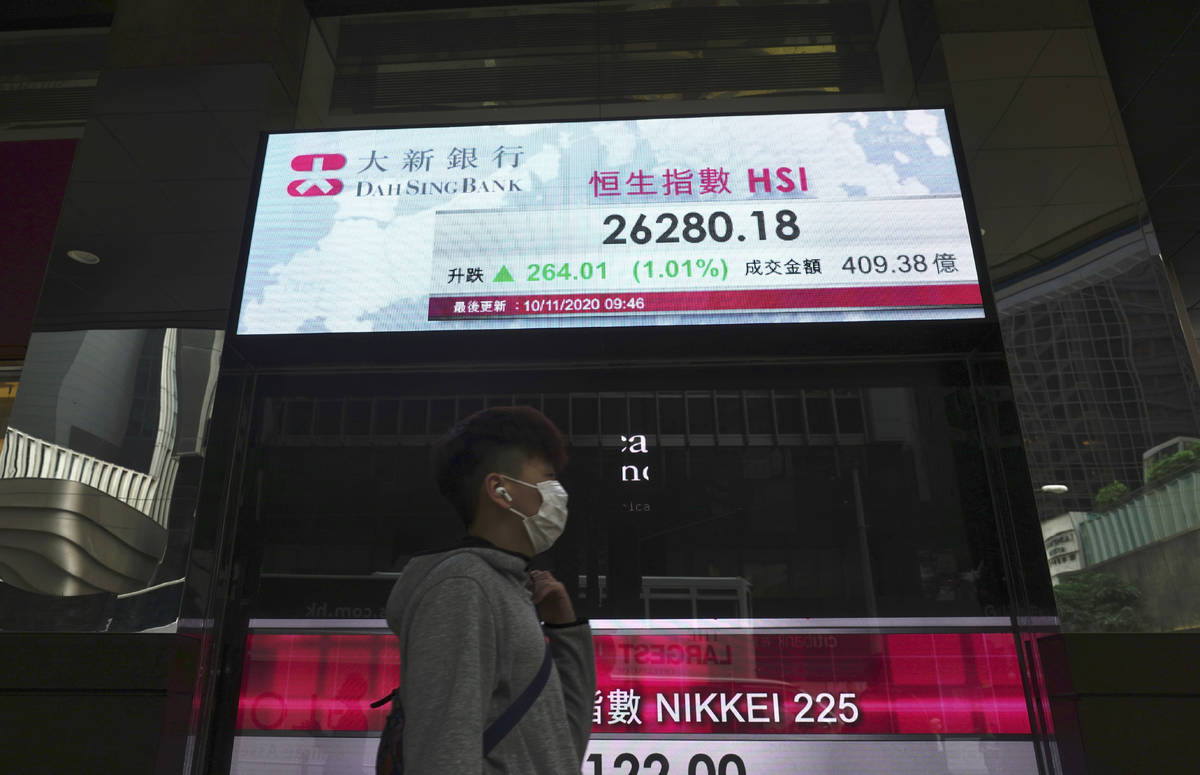 A man walks past a bank's electronic board showing the Hong Kong share index at Hong Kong Stock Exchange Tuesday, Nov. 10, 2020. Asian stock markets rose for second day Tuesday on hopes for progress toward a possible coronavirus vaccine that might allow the world to revive manufacturing, shopping and normal life. (AP Photo/Vincent Yu)

NEW YORK — Wall Street got off to a slow start Tuesday, a day after a big rally driven by hopes that progress was being made toward an effective coronavirus vaccine.

The S&P 500 index slipped 0.4% in the early going, pulled down by more declines in Big Tech companies like Microsoft and Amazon, which have been investor favorites during the pandemic as they thrived even during widespread shutdowns. Apple bucked the trend and edged higher ahead of a series of product announcements later Tuesday.

Global stocks rose for second day Tuesday on hopes for progress toward a possible coronavirus vaccine that might allow the world to revive manufacturing, shopping and normal life.

Market benchmarks in London, Frankfurt and Tokyo advanced while Shanghai closed lower. Japan’s benchmark Nikkei 225 has been trading at 29-year highs as shares rallied after Joe Biden was declared president-elect days after the U.S. presidential election. News about possible progress on a COVID-19 vaccine have pushed prices still higher.

Investors were enthusiastic after Pfizer Inc. said Monday early data on a vaccine under development suggest it might be it might be 90% effective at preventing COVID-19, though that doesn’t mean its release is imminent.

“This offers a ray of hope that the market did not hesitate to take advantage of,” Tai Hui of J.P. Morgan Asset Management said in a report.

On Wall Street, the future for the benchmark S&P 500 index rose another 0.3% and that for the Dow Jones Industrial Average was 0.1% higher.

On Monday, the S&P 500 advanced 1.2% and the Dow surged 2.9% after Pfizer indicated the company and its partner, BioNTech of Germany, are on track to file an emergency application for use of their vaccine with U.S. regulators.

The Shanghai Composite Index lost 0.4% to 3,360.15 after spending most of the day in positive territory. Authorities said they have quarantined 186 people and conducted virus tests on more than 8,000 after a freight handler at the city’s main international airport tested positive for COVID-19.

No additional cases have been found, the city government said on its microblog Tuesday. It remains unclear how the 51-year-old man contracted the virus, which has largely spared the sprawling metropolis despite its dense population and strong international links.

Also Tuesday, China reported October inflation fell to its lowest level in a decade. That gives Beijing room to spend more or ease access to credit further to support an economic recovery that is strengthening.

The Philippines reported its economic output shrank by 11.5% from a year earlier in the quarter ending in September.

Markets were relieved by the resolution to extended uncertainty about the battle for the U.S. presidency. Over the weekend, Joe Biden clinched the final Electoral College votes to unseat President Donald Trump, though Trump has yet to concede.

Congress may be split between Democratic control of the House of Representatives and Republicans in the Senate. Investors appear to be hoping that might constrain a Biden administration’s possible moves on tax increases and regulatory changes.

Potential legislative gridlock also makes chances of a rescue package for the economy from Congress likely to be smaller than if Democrats had swept control of all of Washington.