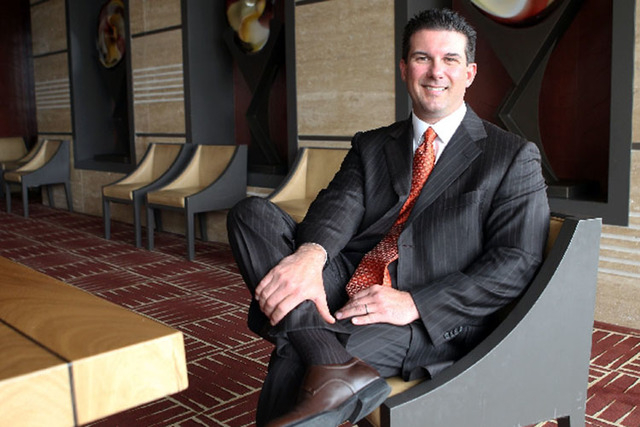 A company that made its mark in Laughlin has received the initial regulatory approval to plant its flag in Northern Nevada.

The state Gaming Control Board on Wednesday recommended approval of the licensing of Marnell Gaming and its affiliated MG Investors to operate the Nugget Casino Resort in Sparks.

The three-member board, meeting in Carson City, questioned Anthony Marnell III, a director with the Marnell Cos. and 85 percent owner of Marnell Gaming, for about an hour before unanimously approving licensure for the 1,382-room property.

Marnell and his company own the Colorado Belle and the Edgewater properties in Laughlin. He announced the acquisition of the Nugget for an undisclosed price in February. The deal is scheduled to close May 6.

“I think it’s good to see this kind of cross-regional operation take hold,” board member Terry Johnson said prior to the vote.

The recommendation will be considered by the Nevada Gaming Commission on April 21.

The property made headlines earlier in the week when the Financial Crimes Enforcement Network, a unit of the U.S. Treasury Department, fined the former owner of the property $1 million for violating anti-money laundering provisions of the Bank Secrecy Act.

The director of the network, known in the banking industry as FinCEN, said the Ascuaga family “willfully violated” the law and “had a systemic breakdown in its compliance program.”

Marnell, who chairs the Nevada Athletic Commission, assured the Control Board that compliance leadership is in place to prevent any future financial reporting violations. Marnell Gaming has no liability under the FinCEN penalty since there have been other owners since the investigation.

The Ascuaga family sold the property in 2013 to a private investment group. Global Gaming & Hospitality has been operating the Nugget, which has a 75,000-square-foot casino, eight restaurants and a 110,000-square-foot convention center.

Marnell, the original top executive of the M Resort in Henderson, told board members his company, which put $70 million into its Laughlin properties over eight years, intends to invest $25 million in the Nugget over the next 18 to 24 months. Renovations are planned for the property’s two towers and its convention center as well as replacing many of the casino’s 1,000 slot machines.

Marnell is bullish on Northern Nevada and said he is encouraged that the Nugget’s player profile is similar to those in Laughlin.

The only snag the company hit in the approval was the failure of an executive with a small ownership interest in the company failing to submit regulatory forms. Rather than hold up the matter, the board agreed to make the approval conditional on the employee, Anthony Magliarditi, answering to the board’s concerns.

In other business Wednesday, the board recommended approval of a key employee licensure of Glenn Carano; a suitability finding and licensure of two International Game Technology executives; and a temporary licensing for a small off-Strip casino.

Carano, a former University of Nevada, Las Vegas, and Dallas Cowboys quarterback and former member of the Nevada Athletic Commission, was recommended for licensing as a key employee for the Eldorado in downtown Reno.

Marco Sala, CEO of IGT, and treasurer Claudio Demolli, were recommended for licensing approval as officers and directors of the company, a leading gaming equipment manufacturer with a large presence in Las Vegas and Reno.

The board also recommended temporary licensure for Tanya Markin, wife of Ronald Markin, operator and majority owner of of the Stage Door on Linq Lane near Flamingo Road. Tanya Markin was licensed as a successor trustee for Ronald Markin, who is in ill health.

The board also officially acknowledged the deregistration of Riviera Holdings as a publicly traded corporation.