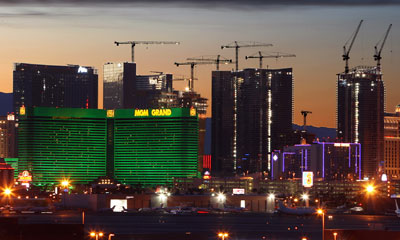 MGM Mirage’s payment, which was approved by the company’s senior lenders, included $100 million that was due to be paid by Dubai World, its joint venture partner in CityCenter. The payment also puts on hold, for at least a month, discussion of a potential Chapter 11 reorganization for what has been billed as the most expensive commercial development in U.S. history.

A bankruptcy would have halted work on the complex, which was first announced in 2004 and is expected to begin opening in October. CityCenter currently employs some 8,500 construction workers.

“We are doing our utmost to see that this project continues, keeping thousands of Nevadans employed,” MGM Mirage Chairman and Chief Executive Officer Jim Murren said in a statement. “We will continue to make every effort to see that CityCenter is completed and becomes an even greater economic driver for the region.”

In a company statement provided to the Review-Journal through Edelman Financial Communications, Dubai World said the payment was a sign of good faith and showed MGM Mirage’s commitment to the project.

“The funding injection gives the CityCenter board more time to work through restructuring options,” the statement said. “It is an acceptable, albeit temporary, solution to the liquidity issues that MGM Mirage is facing. Dubai World looks forward to working with MGM during this process and to completing the project to the benefit of all parties.”

Friday’s payment left $800 million remaining to be funded by the CityCenter partners before a $1.8 billion credit facility can be accessed to pay additional construction costs. MGM Mirage and Dubai World still need to raise $1.2 billion to complete CityCenter.

The $200 million payment satisfied equity contributions that were due Tuesday and capped a week of high stakes drama that has surrounded CityCenter, highlighted by a lawsuit filed by Dubai World against MGM Mirage and reports that different parties had hired outside legal counsel to prepare for a bankruptcy filing on the project. If CityCenter had filed for bankruptcy, construction would have been halted leaving workers idled.

Not only would that have put the project on hold, but putting that many construction workers out of work could boost Southern Nevada’s already record high 10.1 percent unemployment by one percentage point, Alan Schlottmann, economics professor at University of Nevada, Las Vegas, said Friday.

JP Morgan gaming analyst Joe Greff, in a note to investors, said it was puzzling that Dubai World didn’t want to fund its portion of the payment. Greff said Dubai World could be looking at one of three scenarios: it wants to walk away from the project, it wants to sell its stake in the joint venture, or it simply doesn’t have the money to invest.

“Based on today’s events, we have a tough time believing that Dubai World is trying to negotiate a bigger stake in the property,” Greff said. “Dubai World still has to obtain at least one more form of Nevada gaming regulatory approval and we have to wonder how they would secure this if they are refusing to fund contractual equity stakes.”

CityCenter, which is owned in a 50-50 partnership between MGM Mirage and Dubai World, the investment arm of the Persian Gulf state, hired Dewey & LeBoeuf, a worldwide law firm specializing in bankruptcy. Sources said the hiring of the law firm is a pre-emptive move and doesn’t mean a bankruptcy filing will take place.

An equal number of representatives from Dubai World and MGM Mirage sit on the CityCenter board of directors. The majority of the board would have needed to sign off on allowing MGM Mirage to make the full payment, including Dubai World’s $100 million share, sources said.

“Dubai World appreciates the support of MGM Mirage’s bank group and the CityCenter joint venture’s bank group in providing a waiver to its client that allows this payment,” according to the Dubai World statement.

Dubai World and the emirate of Dubai have been caught up in the global financial crisis. Standard & Poor’s Rating Services recently downgraded many of Dubai’s companies and warned that the sheikdom’s debt payments could triple by 2011.

In 2007, Dubai World spent almost $6 billion for a 50 percent stake in CityCenter and 9.5 percent of MGM Mirage’s outstanding shares. Dubai World paid $80 a share for its interest in MGM Mirage, but the company’s stock price has fallen dramatically.

On Tuesday, MGM Mirage said Dubai World’s lawsuit was “completely without merit.” MGM Mirage said it had the available cash necessary to make Friday’s payment. The company told analysts on March 17 it had $600 million in cash on hand. Also, the company received $600 million cash on March 20 from Phil Ruffin, the initial payment for his $775 million purchase of Treasure Island.

The casino operator, which owns nine Strip resorts, said Dubai World “is well aware of our written commitment to meet our funding obligations and that MGM Mirage has available cash to satisfy those obligations.”

Complicating matters is MGM Mirage’s $13.5 billion in corporate debt. Gaming analysts have said the company might have to file a Chapter 11 bankruptcy reorganization as a corporation if it is unable to restructure the obligations. MGM Mirage received a two-month waiver from its lenders on March 17 to avoid violating loan covenants.

Reports of a potential CityCenter bankruptcy filing caused shares of MGM Mirage to tumble more than 13 percent initially Friday on the New York Stock Exchange. After the payment was announced, the company’s shares jumped more than 10 percent. Trading in MGM Mirage stock was halted for part of the day.

“An unfinished project, like the Cosmopolitan on the Strip, produces no cash flow and no return for its partners,” she told investors.

A shutdown of CityCenter could incur additional costs. CityCenter has contracts with numerous businesses, including Mandarin Oriental Hotel Group, entertainment troupe Cirque du Soleil and dozens of retailers and restaurant operators that will set up shop at CityCenter. The deals have completion dates and may contain penalties for missing deadlines.

During the company’s fourth-quarter earnings conference call March 17, CityCenter CEO Bobby Baldwin said slowing down or halting construction of the project would increase costs. v“It’s actually less efficient if we slow it down,” Baldwin said. “It also can unwind all of our Crystals retail leases that are very important to us and our partners. It could impact the residential closings.”

CityCenter includes six high-rise towers with a casino, boutique hotels, condominiums, entertainment and a retail mall. MGM Mirage has begun accepting room reservations for the nongaming Vdara, beginning Oct. 1. The project’s centerpiece, the 4,004-room Aria, is scheduled to open Dec. 16. The company plans to hire more than 10,000 employees at CityCenter and has accepted some 90,000 applications.