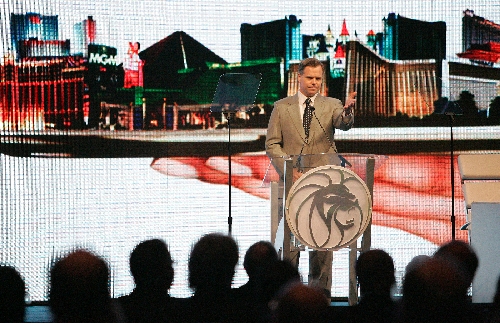 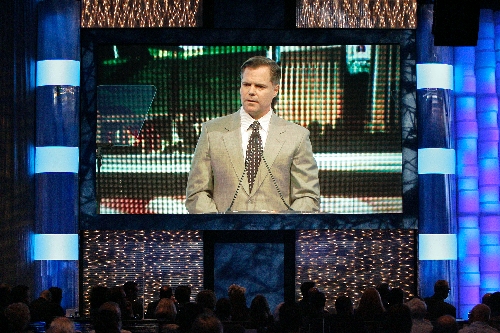 MGM Mirage is now MGM Resorts International after a company name change was approved Tuesday by shareholders at the annual meeting.

The name change will take place immediately. Securities and Exchange Commission approval is not required because the company’s stock symbol, MGM, will not change on the New York Stock Exchange.

In an interview following the shareholders meeting and a lengthy board of directors meeting at Aria, MGM Resorts International Chairman and Chief Executive Officer Jim Murren said he personally knew and had spoken with John Paulson, the head of New York hedge fund Paulson & Co., which acquired 40 million shares of MGM Resorts International last month to become the casino operator’s second-largest shareholder.

While Murren doesn’t know if the investments are long term, he said Paulson’s interest speaks well for the recovery of the gaming industry.

“John is a fundamental analyst, which I can relate to,” said Murren, a former Wall Street analyst. “He believes Las Vegas is going to come back.”

Murren said the name change will help the company’s new M-Life program quickly “catch up and exceed the efforts of competitors in this area.”

Murren said the program will be able to track and reward some 60 million customers in its database for both casino play and nongaming spending.

“It think that’s equally as important as we open and manage new resorts globally,” Murren said.

“It was simply time to go on the offensive and unleash the total power of our unmatched assets by better recognizing customer play and total spend with a more impactful program,” said Bill Hornbuckle, chief marketing officer for MGM Resorts International.

The company is selling its name and expertise to develop nongaming Bellagio, MGM Grand and Skylofts hotels in Dubai, Vietnam, Abu Dhabi, Egypt and China that are expected to open through MGM Resorts Hospitality. The projects are expected to open starting next year through 2013.

Murren said the new all-encompassing players card program will be launched this year. Regional properties will become part of the program in the summer while MGM’s Las Vegas casinos will be added starting in the fall. The changeover will be completed by December.

A name change was first explored in 2009. He said the name MGM Mirage had long since outgrown its usefulness following the $6.4 billion buyout of Mirage Resorts in 2000.

Murren said several names were tested, but MGM Resorts International was the overwhelming favorite of focus groups because it clearly stated the company’s direction.

“Initially, we wanted Mirage employees to feel like they were a part of the company,” Murren said. “That’s no longer relevant because we made a larger purchase ($7.9 billion) of Mandalay Resorts (in April 2005). “It became more important that we maximize our presence as a worldwide resort company.”

MGM Resorts International owns 50 percent of the MGM Grand and the company plans to launch an initial public offering on the Hong Kong Stock Exchange this year with its Macau joint venture partner.

During the shareholders meeting, Murren told one stockholder the name change does not mean the company plans to sell The Mirage, which had reportedly been for sale last year when the company was experiencing financial difficulties.

“The answer is absolutely not. The Mirage is not for sale and we do not intend it to be for sale,” Murren said.

The company’s annual meeting attracted more than 200 shareholders and other interested parties and was held in the convention center at Aria, the 4,004-room centerpiece of CityCenter.

During the meeting, MGM Resorts International Chief Financial Officer Dan D’Arrigo said despite the challenging economy, the company was able to add some $5 billion in liquidity to the company’s balance sheet.

“It’s safe to say we are in much better financial health,” D’Arrigo said.

Following the meeting, Murren said he expects the $8.5 billion CityCenter development to be profitable following completion of the second quarter at the end of this month.

CityCenter took a $255 million operating loss that included a $171 million write-down in the value of the development’s, 2,400 high-rise condominium units.

Murren said occupancy at Aria, which was running at 63 percent in January, has improved every month and customers are spending more on slot machines, food and entertainment. He said inquiries from potential Aria customers have increased to levels seen by Bellagio, the company’s flagship resort.