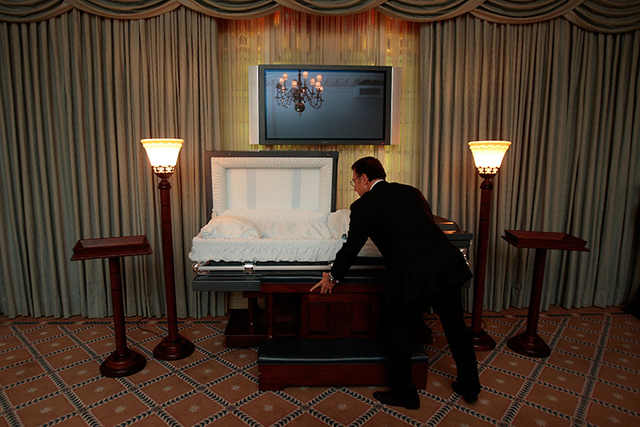 COLUMBUS, Ohio — The way a friend’s body looked at her funeral — thick cosmetics making the 19-year-old seem unnaturally tan for the time of year — prompted Melinda Coffman to rethink the work she was doing.

“After I saw her in the casket, I knew I could do better,” recalled Coffman, a Franklinton resident. “I knew I could make her look more like Lindsay.”

Within two months of the April 2006 service, she had left a job in house painting and demolition, and started college to become a licensed mortician and funeral director.

Coffman is among a growing number of young people entering the mortuary field who have no family background in the business, according to a 2013 survey by the National Funeral Directors Association.

The survey showed that 90 percent of the respondents — 616 students from 31 mortuary schools nationwide — would each become the first in a family to pursue a career as a funeral director.

The profession has long been dominated by families that hand down the trade from one generation to the next.

“It’s become a profession that’s become attractive to other people who have an interest in that line of caregiving,” said Jessica Koth of the association.

The science and compassion required for embalming and other funeral-home duties represent a big part of the appeal, according to Coffman and others, as the efforts help put the departed in a positive light for the final send-off.

The job consists of turning “a body that you wouldn’t want anybody to see into something the public can see and remember,” said Coffman, who, at age 32, recently completed her final week of training before taking the Ohio licensing exam.

Coffman spent the past year as an apprentice for Shaw-Davis Funeral Homes.

Despite her desire to pursue such work, the classes she took at the Cincinnati College of Mortuary Science — the only such licensed school in the state — posed their share of challenges.

She recalled, for example, how she almost got sick during her first cadaver lab — a case of suicide.

The next lab proved easier, though.

She worked her way from the periphery of each session to the middle of the action, her passion steadily growing.

Coffman continues to work temporarily at Shaw-Davis, where she tends to all aspects of the business — from answering the phone and meeting families to embalming the dead.

“Viewing is the first step for grief and closure. If you don’t get to see that person in that state of obviously being dead but obviously being peaceful, then I think it would be hard for people to move on.”

Kaleb Swinehart entered the mortuary field because of the prospect of building connections with grieving strangers — a way to debunk the stereotype that funeral-home directors “are cooped up in a little dark area in their black suit” or tinkering in a morgue all day.

Swinehart, a 25-year-old downtown resident who works for the O.R. Woodyard Funeral Home, tries to tailor his approach to the personalities of the families with whom he works.

Some arrive in poor spirits or in search of a shoulder to cry on; others tell stories about loved ones — including a woman who shared how her mother became the first “escapee” from the nursing home where she lived.

Swinehart takes pride in his work, he said, but nonetheless hesitates to tell other people what he does for a living because of misconceptions.

He cited a spring conversation he had with an acquaintance outside work: “She flat-out told me that it must be the most depressing job in the world.”

In reality, Swinehart said, the job is anything but.

“There’s this stigma with funeral directors that they’re weird and stuff like that. But the people I went to school with were just like any 20- or 21-year-old person out there.”

Koth, of the funeral directors association, said funerals — now more than ever — are celebrations of life, not somber gatherings.

In meeting new people every day, funeral home directors say they work to honor the lives of the relatives lost.

“If we’re going to be dealing with their loved one, we want to know who they were, too,” Coffman said. “Unfortunately for us, we always meet them after the fact, so we don’t get to know them except for what other people tell us.”

Cornell Robinson-Carroll of the National Funeral Directors & Morticians Association, a membership-based trade organization for mortuary workers, said that those without a family background in the business face an additional challenge when job hunting.

“Most of the funeral homes are family-owned mom-and-pop firms,” he said, “so I think there’s a little trust issue when you bring in an outsider.”

Many students pursue licenses as both a funeral director and an embalmer, hoping to increase their chances of landing a job.

The 23-year-old, who is seeking an apprenticeship after having finished her third of five quarters in Cincinnati, expects the job search to be “a little difficult,” she said.

A funeral director’s job, like any other, has its downsides: The hours are long and irregular; and the beginning pay, Robinson-Carroll said, is about $30,000.

Coffman and others also noted how funeral home employees sometimes struggle to avoid thoughts of death when off the clock, especially after working with people who remind them of loved ones.

Particularly difficult, Swinehart said, is serving the families of children who have died.

Such drawbacks aside, Coffman said she has found her calling in mortuary science — a business she plans to be in “for the rest of my life.”

And she doesn’t forget the friend whose death in a car crash inspired her.

“Every year on her anniversary, I write another friend of ours, and I’m like ‘I thank Lindsay every day — not for dying but for really putting the fire under my ass not to be a waste.’”

Information from: The Columbus Dispatch, http://www.dispatch.com