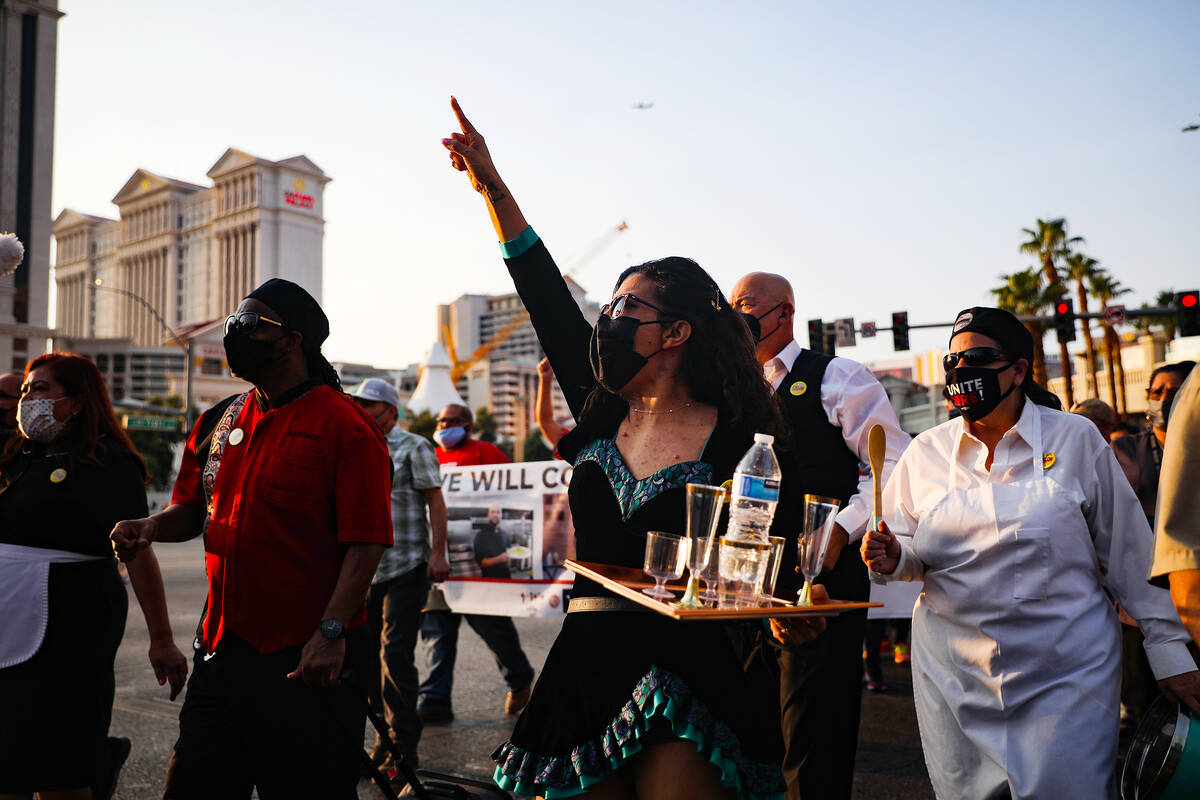 Cristina Kline chants as she marches with other members of the Culinary Workers Union Local 226 to bring attention to the 21,000 members who are still not back to work since the pandemic began, on Friday, Sept. 24, 2021 on the Strip in Las Vegas. (Rachel Aston/Las Vegas Review-Journal) @rookie__rae 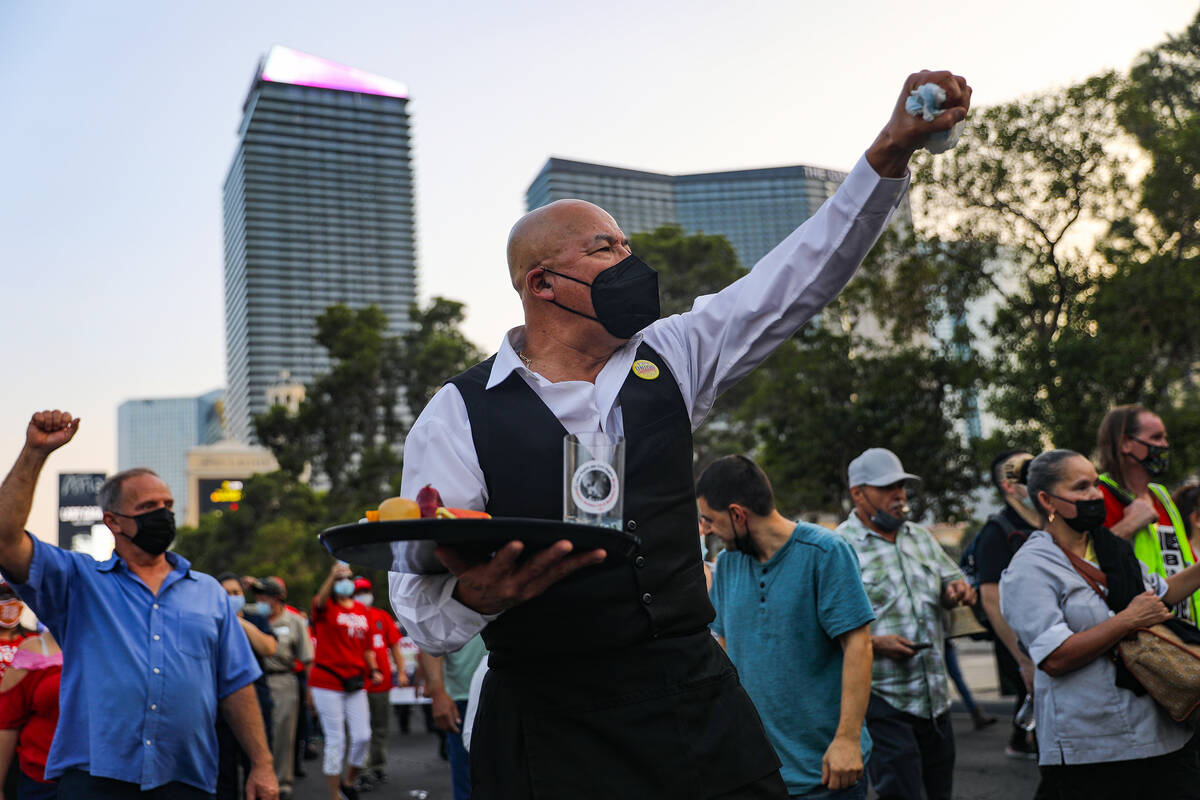 Jose Rivera chants as he marches with other members of the Culinary Workers Union Local 226 to bring attention to the 21,000 members who are still not back to work since the pandemic began, on Friday, Sept. 24, 2021 on the Strip in Las Vegas. (Rachel Aston/Las Vegas Review-Journal via AP)

While job growth last month in the leisure and hospitality sector outpaced all other private sectors in the U.S., it’s unclear if Nevada has experienced the same trend.

A Friday report from the Department of Labor showed the leisure and hospitality sector led the way, adding 74,000 jobs, in September, though employment in the industries are down by 1.6 million, or 9.4 percent, since February 2020. Professional and business services added 60,000 jobs last month, while retail gained 56,000 jobs after two months of little change.

Nevada will release its September jobs data later this month.

Whether the state sees its own gains in leisure and hospitality will go a long way in determining Nevada’s job recovery, economists say.

David Schmidt, chief economist at the state employment office, said conventions are returning and large events that require heavy staffing like Raiders games should help add jobs. September will be the first opportunity to see if casino employment increases as a result, he added.

“We’ll see what actually happens when the data comes out,” Schmidt said.

But the hotel-casino industry is still down about 65,000 jobs from before the pandemic and it’s recovering more slowly.

About 39,000 Culinary union members, or 65 percent of the union’s membership, are back to work, Culinary Local 226 spokeswoman Bethany Khan said Friday. The union represents 60,000 hospitality workers at hotel-casinos downtown and on the Strip. That leaves 21,000 members who haven’t returned to work.

Convention business has helped fill midweek hotel rooms and international travel restrictions will ease for the vaccinated come November, both of which should create more jobs, according to Virginia Valentine, president of the Nevada Resort Association.

She said it’s a unique time to try to hire. Employers are competing for skilled employees, with some resorts offering signing bonuses or hiring on-the-spot, Valentine said.

Some people aren’t ready to return to work, shrinking the available workforce, and the delta variant “also reminds us that we’re still in a fluid situation,” Valentine said.

Thoran Towler, CEO of the Nevada Association of Employers and state labor commissioner from 2011 to 2014, said COVID-19 has changed the hiring process, creating its own set of obstacles.

“I think it’s more complex than saying, ‘Employers want to hire, but nobody wants to work’ or employees saying, ‘I keep applying, but nobody will hire me, what am I doing wrong?’ ” Towler said.

UNLV economist Stephen Miller said the end of federal enhanced jobless benefits appears to have had little impact on job gains. That people haven’t returned “suggests something else is going on,” adding that people may still be afraid of contracting COVID-19 or have decided to focus on caring for their children or loved ones.

He also said some hospitality jobs may not return as companies automate responsibilities.

“It won’t be quite the same as it was before but but we’ve learned how to live a little differently,” he said.