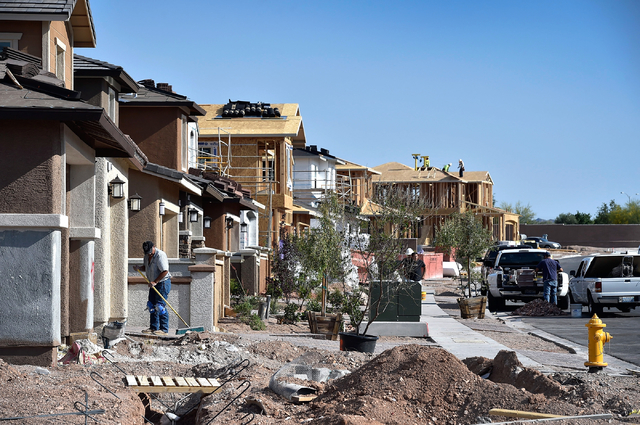 Homes under construction Monday, May 23, 2016, in Henderson. The construction industry, which was devastated in the recession, is now the fastest-growing sector in the state on a percentage basis. (David Becker/Las Vegas Review-Journal Follow @davidjaybecker)

CARSON CITY — Nevada has regained nearly all of the 175,000 jobs lost during the Great Recession and should fully recover later this year, a state economist told the Economic Forum on Thursday.

Bill Anderson, chief economist for the state Employment, Training and Rehabilitation Department, said Nevada added 140,000 jobs from 2010 to 2015. Also, 30,000 more jobs have been added in the first four months of this year, he said.

“We’re getting close to regaining all of those lost jobs,” Anderson said. “By the time we get out to the end of next year, we will have exceeded our prerecessionary high by close to 100,000 jobs.

“The news of late has been encouraging,” he said. “We expect that to continue.”

The recruitment of electric car makers Tesla and Faraday Future to Nevada are high-profile examples of where some of the jobs are being created. Manufacturing overall is expected to add about 5,000 jobs a year through the end of 2017.

But Anderson said all employment sectors except mining are showing job gains.

Construction, which was devastated in the recession with 100,000 lost jobs, is now the state’s fastest-growing sector on a percentage basis, he said. About 50,000 of those lost jobs are expected to be restored in the next couple of years, Anderson said.

“So that diversified growth we think is very encouraging and helps set the stage for more sustainable growth going forward,” he said.

The labor news is a big positive for Gov. Brian Sandoval as he prepares his legacy budget as governor for the 2017 Legislature. Job growth and a growing economy could mean higher tax collections, giving Sandoval additional revenue to fund priorities in his 2017-19 budget that will be unveiled in January next year.

The Economic Forum, a panel of five fiscal experts, is charged with setting the revenue estimates that Sandoval and the Legislature must use to adopt a balanced budget. The panel was hearing a variety of informational reports on Nevada’s economy and its fiscal health in advance of making its initial revenue projections in December.

Anderson pointed to a number of positives in Nevada’s labor market, including:

— Small-business jobs at just over 590,000 are at an all-time high in Nevada with gains reported in each of the past 20 quarters.

— Las Vegas area employment is at an all-time high with complete recovery of all the jobs lost in the recession.

— The average wage in 2015 was $20.58 an hour with three occupations, management, legal and health care practitioners, paying more than $40 an hour.

Although there has been debate about the quality of the newly created jobs, Anderson said the majority are full-time positions.