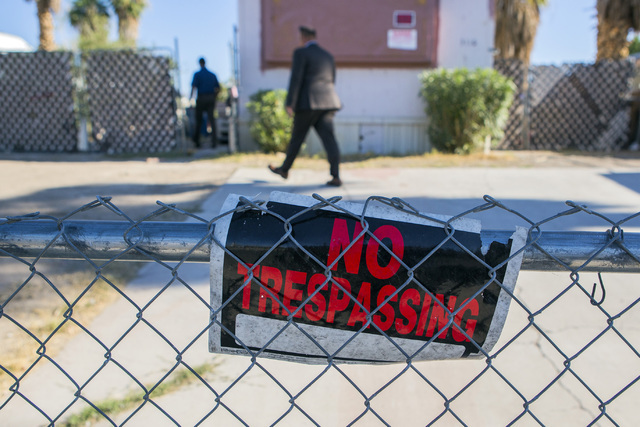 Greater Las Vegas Association of Realtors President Scott Beaudry was preparing for a quiet Fourth of July weekend when he got a call from a management office about a squatter in the east valley fourplex he manages.

The units had been boarded up for months and were under contract for a short sale.

Beaudry drove to the fourplex on July 1 and waited. A woman emerged from one of the units and he asked what she was doing inside. She had a lease, she said.

Beaudry learned that her unit and the three others were all occupied. She had “leased” them to the other squatters.

“I couldn’t believe it,” Beaudry said. “She was not only a squatter but an entrepreneurial squatter.”

Beaudry told her he managed the units and there were no leases since the property was being sold. He said would go to the Metropolitan Police Department to file a squatting case under a new law.

A police officer stopped by later that day to investigate and questioned her lease.

During the Fourth of July weekend, the squatters left.

That kind of quick resolution is just what proponents of Nevada Assembly Bill 386, the anti-squatting sought.

The law, passed by the Legislature in May 2015, took effect in October, It creates new crimes such as housebreaking and unlawful occupancy for which squatters can be arrested. Repeat offenders can face felony charges and four years of jail time.

Despite the law, squatting persists valley wide. And many real estate agents, banks and property owners don’t know about the new law and haven’t asked police to help with ridding squatters.

But Beaudry’s experience with his fourplex may signal progress. Squatters may be getting the message – keep occupying homes and you’ll go to jail.

“I guess me going over there and telling them I would be handling this appropriately scared them, and they all moved out,” said Beaudry who credits the new law. “Before, you had to get a judicial eviction and if the squatters knew what they were doing, they could live in the properties for weeks to months because they would play the system. Now, you don’t have to do that.”

From October through March, Metro said it made more than 50 arrests related to squatter calls that involved drugs, warrants, stolen property and other charges. Most people use the empty homes to commit other crimes — for drug making, as chop shops where vehicles are stripped for parts, and as hubs for credit card and identification fraud, said Metro Police Lt. Nick Farese, who tracks the issue for the department and works with the Greater Las Vegas Association of Realtors.

Encouraged by the media police and real estate officials, residents have been reporting squatting.

Awareness of squatting is spreading, but reducing it will take time, Farese said.

“We have a law on the books that we never had before,” he said. “The challenge with everything is manpower. …

“We have limited resources, and violent crime is a priority first,” Farese said. “We want people to call and tell us there’s a squatter in the house, but it doesn’t mean a uniformed officer in a black and white will pull up and make an arrest.”

The Henderson Police Department said it has made eight arrests since the new law took effect. Investigations were underway on 60 cases recently.

Sgt. Kirk Moore, who handles squatting for the department, said the new law has given police more leverage to deal with squatting.

“The word has gotten around in the county so people know what to look for and criminals know that if they do this there’s a likelihood of prosecution,” Moore said. “That’s starting to weed out people.”

‘THE WORD IS OUT’

In North Las Vegas, officer Scott Vaughn works with three other officers and city code enforcement on a squatter task force. He said the department has made 10 squatting-related arrests over the last 18 months. Defendants are pleading guilty and getting probation, but face jail time if they continue, he said.

The city has about 100 active squatter cases among 6,000 homes in foreclosure, he said.

“It’s not gotten any better or worse, but has been steady,” Vaughn said. “But word is starting to get out there, and it will be a deterrent.”

Some Realtors and banks with foreclosed homes continue to pay squatters $3,500 to $5,000 to move out, since formal eviction might cost that much, Vaughn said.

“That became a very rampant problem and we are trying to wrap that up as more brokers, banks and realty companies find out what we’re doing,” Vaughn said. “We were able to save one brokerage $12,000 in one week from keeping them doing cash for keys.”

The public has helped fight squatting by telling police where to find other squatters, Vaughn said. He’s even getting tips from mail carriers and firefighters who spot generators powering homes or stealing power from neighbors.

Realtors are noticing a difference.

Michael Ring, broker/owner of Go Global Realty, said he’s had no squatting cases at his 280 properties this year. From 2011 to 2015, he’d averaged about 10 squatter cases a year, he said.

“Now they know they can’t hide in the shadows because people will report them,” said Ring, vice chairman of the GLVAR’s property management committee.

“You still have squatters going on, but you have a structure to handle them now,” Vaughn said. “It gets them out period because before cops would tell you it’s a civil matter and you just have to deal with it.”