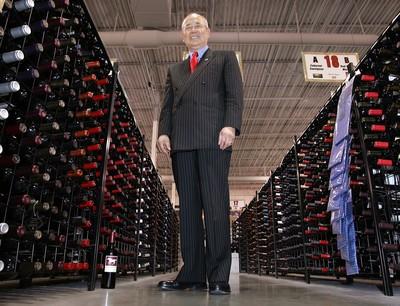 A new Korean immigrant got the inspiration of his life one day while buying a bottle of Scotch whiskey.

Hae Un Lee, a drug investigator for the South Korean government, wanted a challenge when he immigrated to the United States. But he was depressed because he could land only menial, temporary jobs.

But as he bought his bottle of whiskey that long-ago day, Lee noticed the cashier said nothing; he took his money and gave him change.

Lee, who was unable to speak English at the time, decided to open a liquor store.

Twenty-seven years later, Hae Un Lee owns and operates 10 liquor stores in Nevada. He intends to grow bigger in the next few years. He will soon open a tavern in Mesquite.

Lee speaks English today but not with the easy fluency of his son and business associate, Kenny Lee.

The 65-year-old works from a second-floor office overlooking 28,000 square feet of liquor retailing space. The space includes a wine cooler in which bottles are priced from hundreds to thousands of dollars.

The stairway to his office is lined with photos of political office holders, mostly Republican, including the current President Bush and Vice President Dick Cheney. A visitor sees a photo of Democrat Al Gore, but Lee explains that, since then, he found a better home for his political philosophy in the Republican Party.

Lee’s philosophy for business success is to work hard and offer more choices to his customers.

He does not long to return to South Korea. The United States, he says without qualification, is the greatest country in the world.

Question: What did you do before coming to the United States?

Answer: I worked for 10 years as Korean central government investigator of drug traffickers.

Question: Why did you come to the United States?

Answer: I like challenges. I was 38 years old. I went on a vacation and stayed with a friend in New York who persuaded me to study dry cleaning four weeks. I did not like it.

Question: What was it like as a new immigrant?

Answer: I had a wife and three kids. Nobody speaks English. Whole family moves together. Very tough. I am looking for a job. Nobody gives me a job.

Question: How did you get into the liquor business?

Answer: I went to buy a bottle of Johnny Walker Black Label, and the (sales clerk) said nothing to me. I spoke zero (English). So (I decided) "This is my business."

Question: Where did you open the first store?

Question: Was it tough getting started in the business?

Answer: This is seven days a week. We don’t have day off. Several years, we don’t have a vacation. My wife worked in a casino.

Question: What strategy did you develop for becoming a successful liquor retailer?

Answer: I bought my first store in 1989 and only owned stores. After that, I never leased. Lease rates otherwise would continually increase and make the store unprofitable.

Question: How is the Nevada liquor market different from other states?

Answer: (Kenny Lee) We have so many supermarkets, and they all carry liquor, beer and wine.

Here, all the supermarkets carry liquor, beer and wine. There’s a lot of competition.

(Kenny): You’ve got big-box stores, like Costco and Sam’s Club, and you’ve got these gourmet chains that are opening like Trader Joe’s.

Question: What did you do to distinguish Lee’s Discount Liquor from competitors?

Answer: (Kenny) Just selection, service and pricing. You won’t find a selection of this size anywhere.

Our pricing is by far the best in town.

(Hae Un): How many varieties do we have of vodka.

Question: Has the liquor retailing business changed over time?

Answer: (Kenny) I remember, back in the ’80s, spirits used to account for probably about 70 percent of our sales, but now wine and spirits are pretty much equal. 40 (percent) wine, 40 (percent) spirits and 20 percent beer for us.

Question: Even with beer, are you finding more demand for premium brands.

Question: How many stores do you have now?

Question: Are you planning to expand into Northern Nevada?

Question: What other plans do you have?

Answer: Next month, our first tavern will open in Mesquite.

Question: What else are you doing?

Answer: (Kenny) Our stores are pretty big. To blanket the town, we’re opening neighborhood stores, 4,000- to 6,000-square-foot stores maybe about 85 percent of the selection we carry at (larger stores).

We’ll open probably 10 to 15 of those in the next couple of years.

Question: You established a nonprofit charitable organization as well?

Answer: Yes, Lee’s Helping Hand. We started five years ago with Lee’s Wine Experience. It now brings in 3,000 people. Now, we have Lee’s Beer Experience that attracts 3,000 people. Every year we send 20 people over there to serve 500 turkeys to Catholic Charities for Thanksgiving.

Question: Could you have built a business as big and successful as this in Korea?

Answer: No. This is a fair country. No opportunity in Korea. The U.S. is the best. Life or business.

Question: What should new immigrants learn from your success?

Answer: I’m a very hard worker. My thinking is positive. I never think negative. I never ever worried. The United States is the best country in the world. There’s a lot of opportunity if you work hard. But if you don’t work, forget it.

Question: When will you retire?