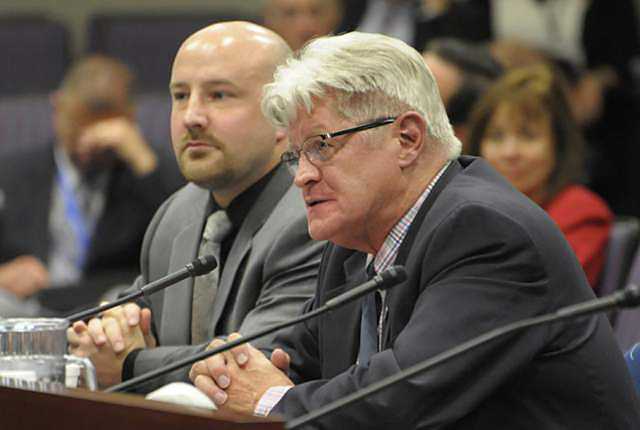 State Controller Ron Knecht, right, at a budget hearing Thursday, May 14, 2015, at the Nevada Legislative Building in Carson City. (Special to the Pahrump Valley Times)

CARSON CITY — A repeal of Nevada’s commerce tax would cost the state government about $161.3 million in fiscal 2019, a Legislative Counsel Bureau analysis found.

The estimated financial impact of a repeal would be about $97 million annually in fiscal 2020 and beyond, according to figures filed this week with the Nevada secretary of state’s office.

Nevada Controller Ron Knecht and former Las Vegas City Councilman Bob Beers, both Republicans, this month filed a petition to repeal the commerce tax passed by the Nevada Legislature in 2015. The tax applies to businesses with gross revenues that exceed $4 million annually.

If petitioners get 112,544 signatures from Nevadans who voted in 2016, a referendum asking to repeal the tax will be on the ballot in the 2018 general election. The deadline to get the signatures is June 19, 2018.

Republican Gov. Brian Sandoval spearheaded passage of the commerce tax as part of a push to better fund and reform public education in Nevada.

The analysis also notes taxpayers may claim their commerce tax credits differently because of the potential elimination of the referendum, impacting the state’s loss of revenue, according to the analysis.

Fiscal 2019 starts July 1, 2018. The figures also factor in about $498,000 annually that the Nevada Department of Taxation would save on staffing and administrative costs tied to the commerce tax.

Knecht, who formed the political action committee Repeal the Commerce Tax Inc., led a similar effort in 2016. It was not allowed on the ballot because the Nevada Supreme Court cited concerns about the petition’s description of effects. Knecht has said this referendum will address those concerns.