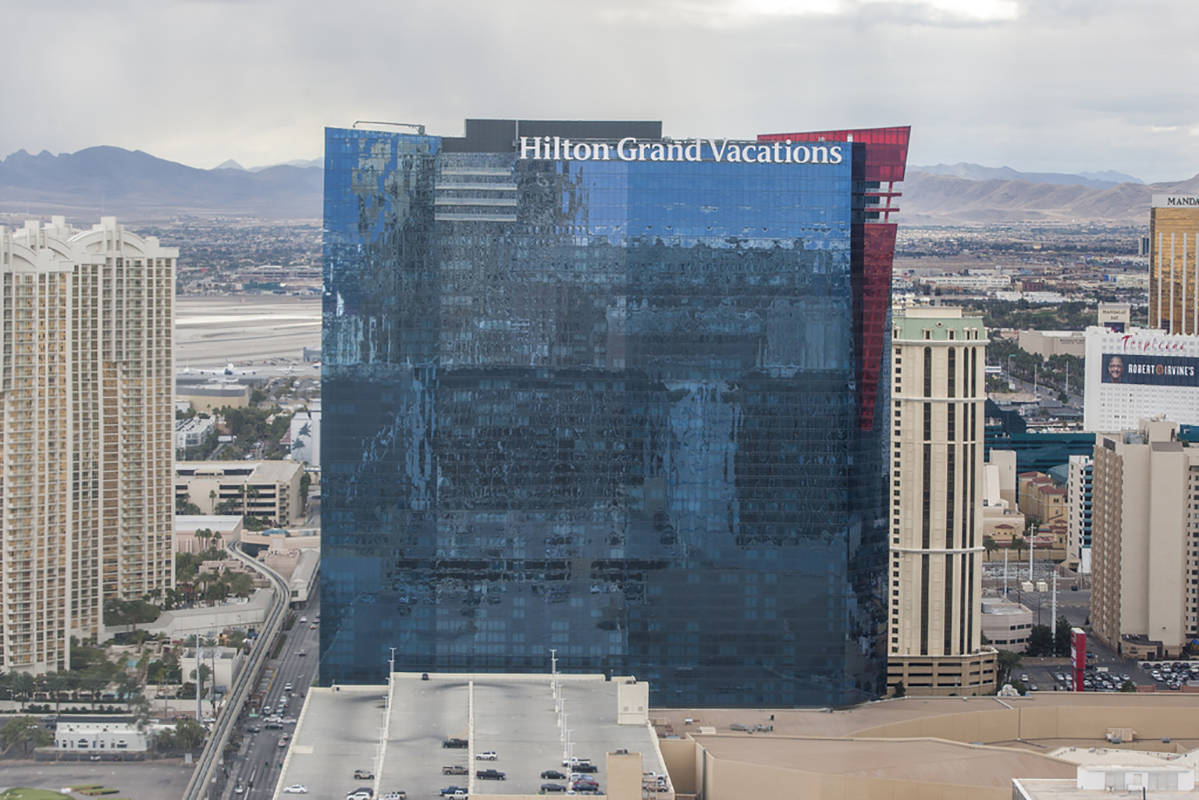 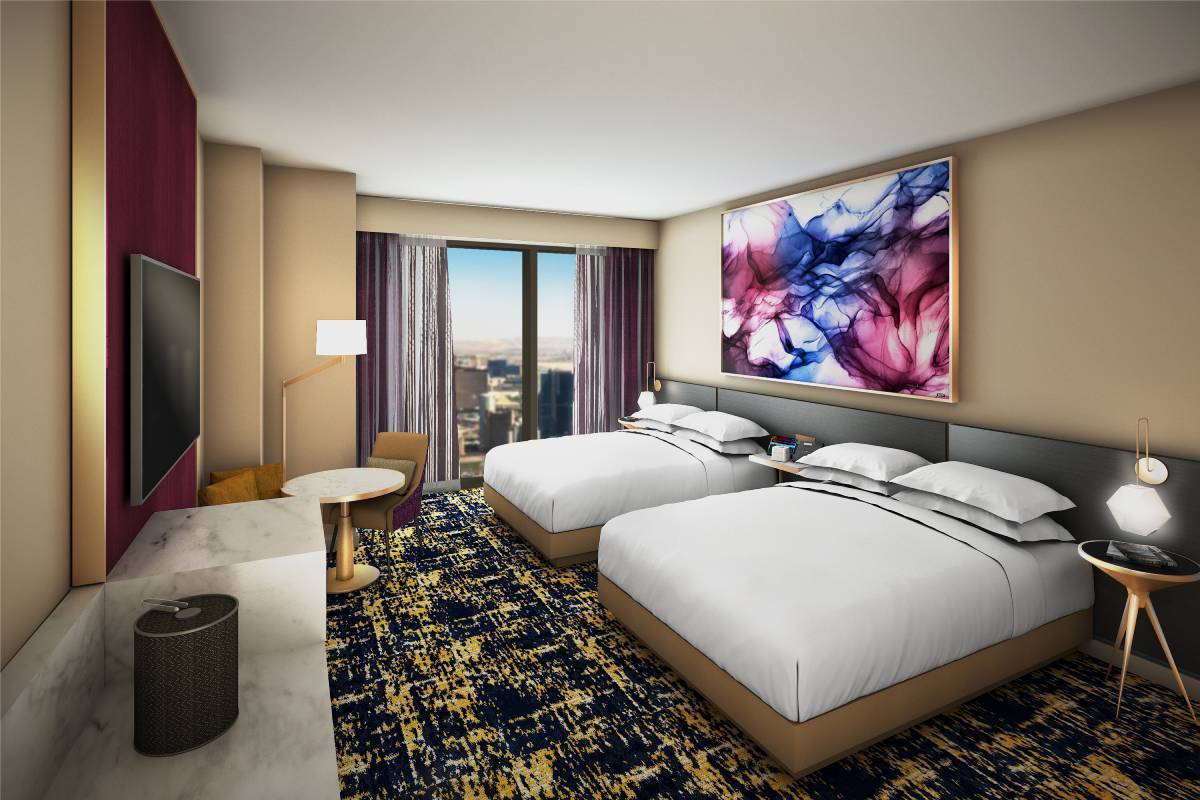 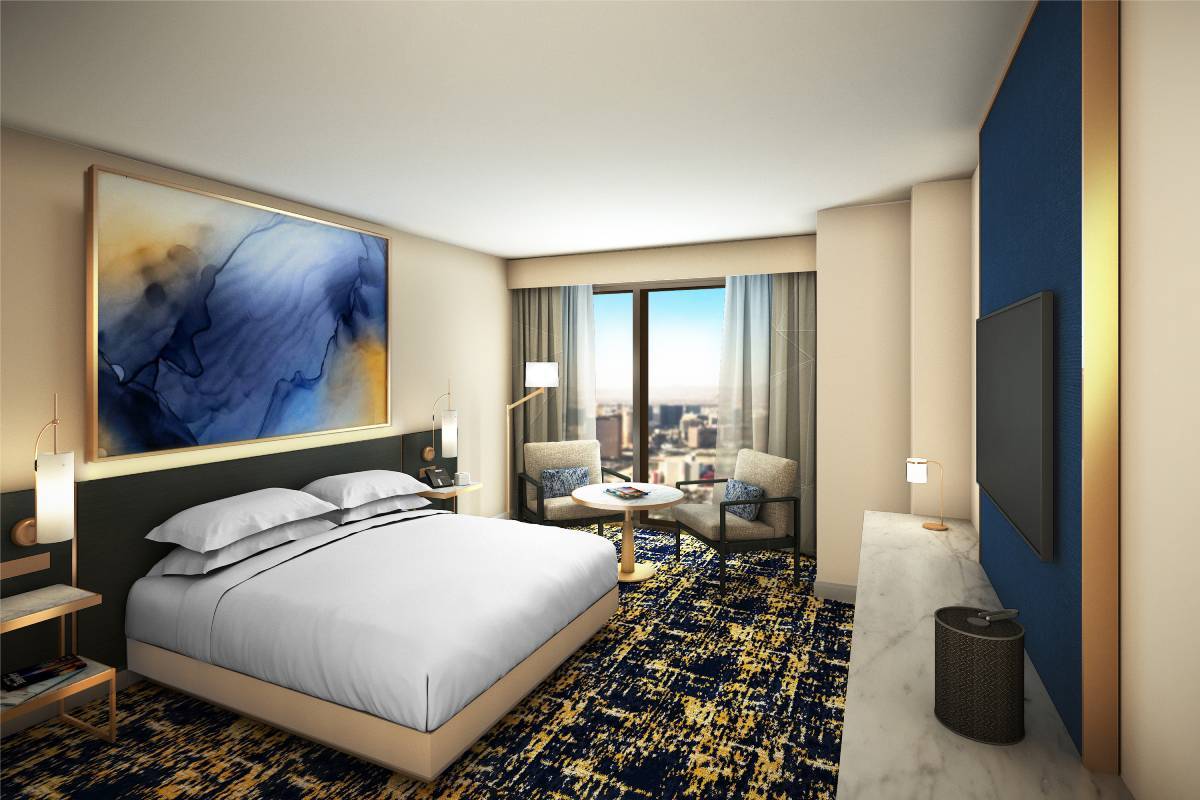 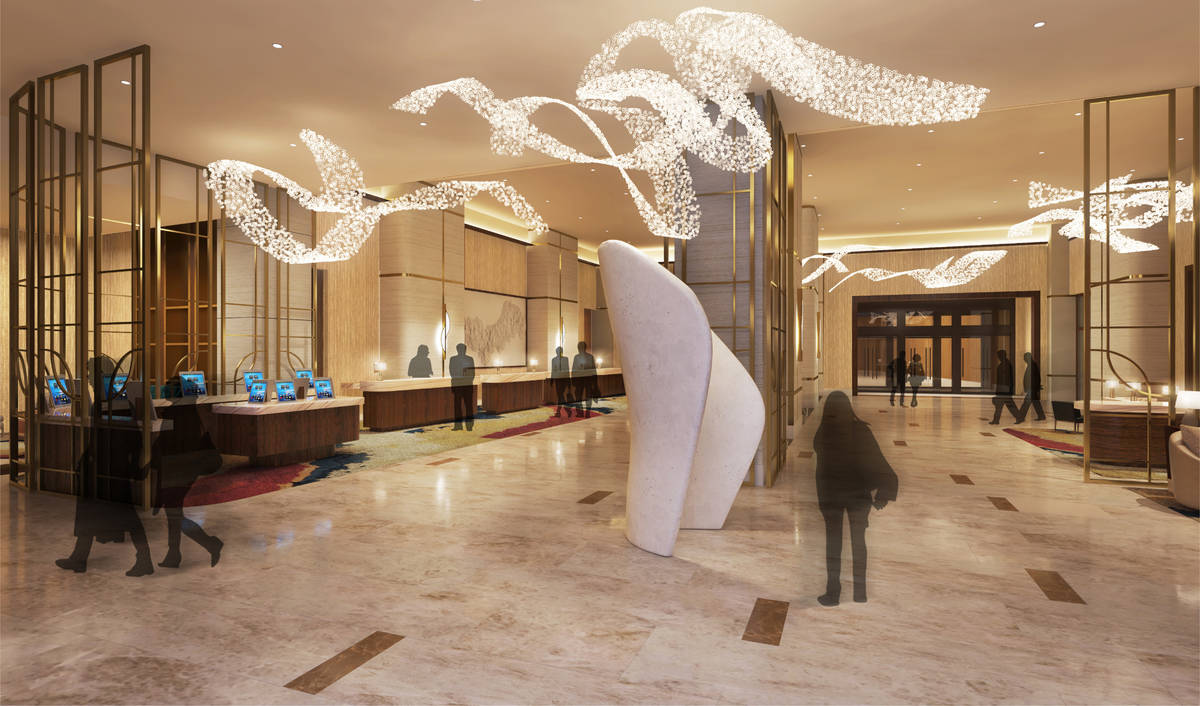 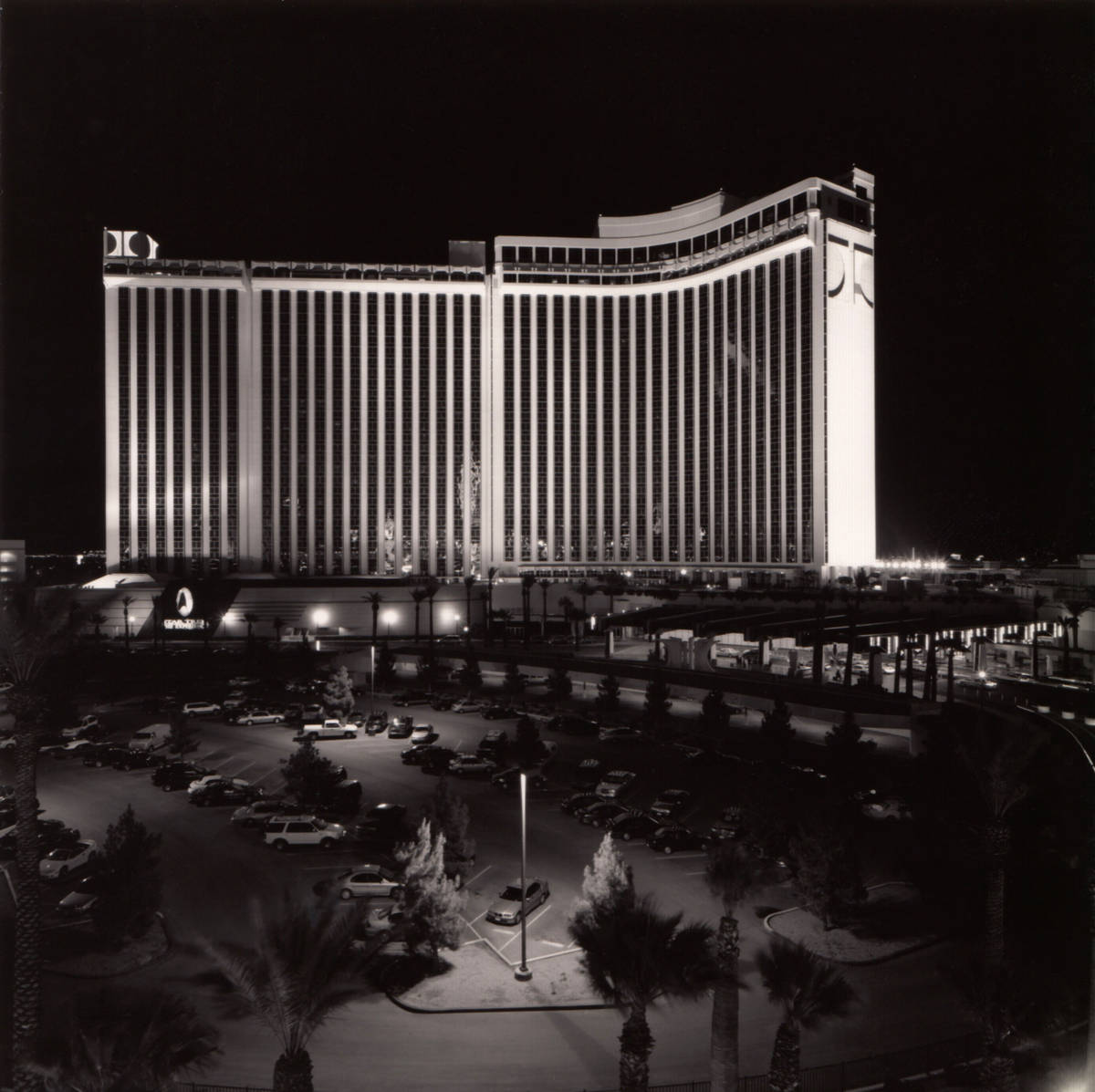 Exterior of the Las Vegas Hilton, which is now the Westgate. 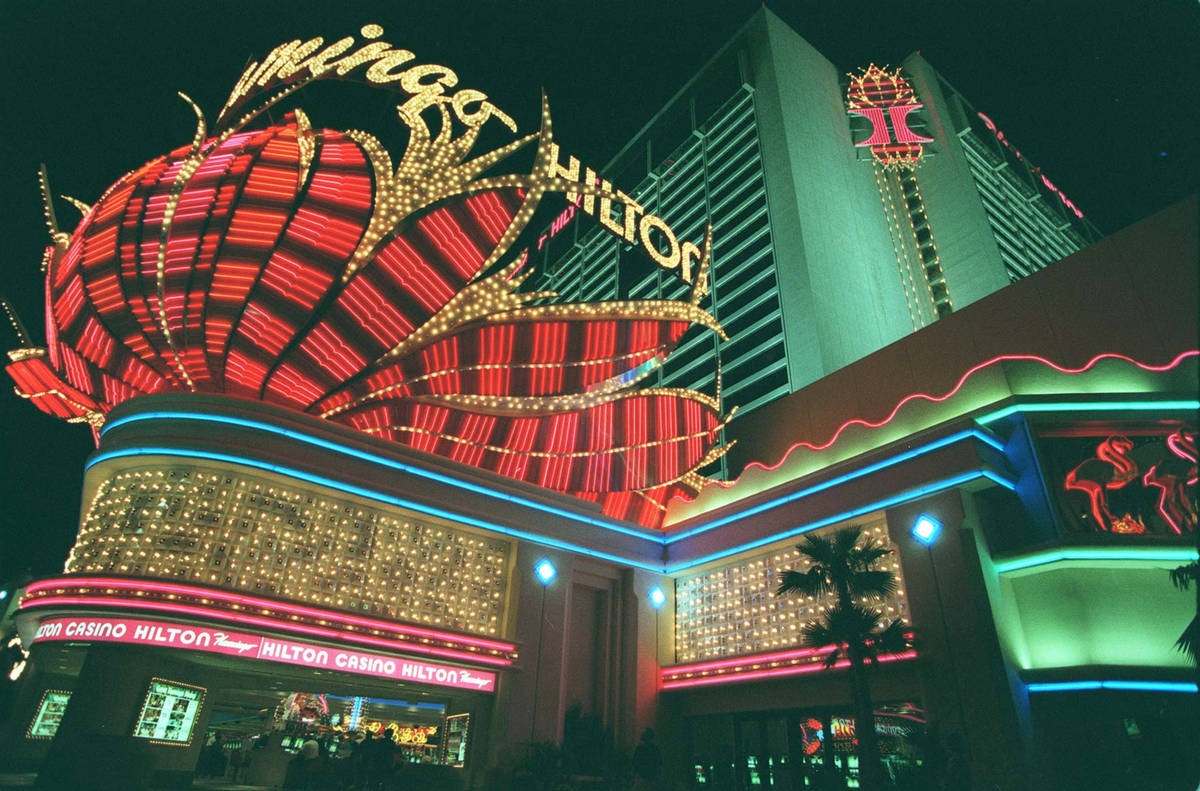 Sin City will have two new resort-casinos by the end of the year, with Resorts World Las Vegas and Virgin Hotels Las Vegas set to open in the coming months.

But there’s another brand expanding in Las Vegas this year that has flown under the radar: Hilton Worldwide Holdings Inc.

Once the namesake to one Las Vegas’ most successful resorts, the Hilton brand is more commonly found in the city’s off-Strip, nongaming hotel properties these days. This year, though, it’s set to add 5,000 rooms to its portfolio through Virgin Hotels and Resorts World.

“Both partnerships have solidified our presence in this sought-after destination and have brought Hilton back to the center of the city,” Danny Hughes, Hilton’s executive vice president and president of the Americas, told the Review-Journal. “Las Vegas is a destination that attracts people from all over the world, and we see it as a unique market for development and investment opportunities.”

In 1969, when the Las Vegas Hilton — then referred to as The International — opened, it was the largest hotel in the world and considered by many to be the first true megaresort.

It was a breathtaking feat for its time: more than 1,500 hotel rooms. Thirty stories. A 2,000-seat showroom that hosted stars such as Elvis Presley and Barbra Streisand.

Las Vegas mogul Kirk Kerkorian in 1970 sold the property to Barron Hilton, who renamed it the Las Vegas Hilton the following year. Business thrived under the new ownership, and Hilton ended up expanding its hotel-casino operations with the Flamingo Hilton and Reno Hilton, now the Grand Sierra Resort. Its casinos accounted for more than 30 percent of the company’s total revenue in 1987, according to its annual report.

The document said the Las Vegas Hilton helped lead a “stellar year” for the company, drawing in convention travelers from the nearby Las Vegas Convention Center as well as international guests and high rollers.

But the heyday didn’t last long. Hilton ended up spinning off its “slumping casino business” into its own public company just over a decade later, according to a 1998 Review-Journal article. The property changed hands again and briefly went by the name Las Vegas Hotel before being transformed into the Westgate.

Hilton’s presence in Las Vegas has been diluted since then, with the company focused on a capital-light business model. Nevertheless, executives say Hilton still believes in Las Vegas.

The company’s 2021 buildout in Las Vegas includes four of its brands, three of which are being introduced to the city for the first time.

Resorts World’s partnership is tied to three Hilton luxury brands: Hilton Hotels & Resorts, LXR and Conrad, with each brand getting its own entrance, lobby and selection of room products. The $4.3 billion property is set to open later this year.

The company already has a presence in the Tropicana and offers stays in nongaming hotels on and off the Strip, including the Waldorf Astoria, Home2 Suites and Embassy Suites.

Industry watchers don’t expect the big-name additions to have a substantial impact on Hilton’s bottom line.

“To be honest, a deal like this probably doesn’t move the needle much for the company overall, given its size,” Evercore ISI analyst Rich Hightower said. “But I think it’s an important beachhead in a big hotel market, where they didn’t have as much distribution as some of their peers.”

Hilton had nearly 6,400 properties as of Dec. 31, according to filings with the U.S. Securities and Exchange Commission.

Hughes said the partnerships should elevate Hilton’s portfolio and introduce its brands to Las Vegas’ global base of tourists. It’s also considered a safe investment for Hilton, adding thousands of rooms to the company’s portfolio without requiring the company to put up capital.

Hilton’s newest Las Vegas rooms may not be opening at an ideal time, with visitation rates in Las Vegas still below their pre-pandemic peaks, but the company said it is confident the market will rebound.

“Las Vegas is a destination that doesn’t give up or give in. Time and time again, the city has reinvented itself, always staying true to its core of offering entertainment in many formats,” Hughes said. “We are all in on our growth and development in the city. Las Vegas has been and will continue to be a priority market for Hilton.”

One of the most valuable assets of a Hilton partnership for Resorts World and Virgin Hotels may be access to the company’s customer database and loyalty program.

The partnerships add Virgin Hotels and Resorts World into the Hilton Honors system, which incentivizes travelers to stay at the properties to redeem or earn points. The program could act as a bridge between Hilton’s 112 million-plus rewards members and Las Vegas’ two new properties.

“(This gives us) the opportunity to engage with a larger audience,” Richard “Boz” Bosworth, president and CEO of JC Hospitality LLC, which owns Virgin Hotels, said of the Hilton partnership. “(We can) increase our overall brand awareness to more potential customers via more channels.”

Hightower believes the partnership could be especially useful for Malaysia-based Genting Group, Resorts World’s operator, because most of the company’s assets are in Asia. With its upcoming Las Vegas property, Genting has resorts in New York, Malaysia, the Bahamas, the United Kingdom and Singapore, whereas Hilton has properties in 119 countries and territories.

“Genting needs as wide a marketing funnel in the U.S. as possible. … They’ve got nothing on the West Coast, they’ve got nothing in middle America,” Hightower said. “A lot of those markets will feed into Vegas.”

As for Virgin Hotels, Bosworth described the Hilton partnership as “the best of both worlds” for the company.

“We have the operational support of Hilton, while still getting to deliver a unique experience to our guests,” he said. That operational support includes access to Hilton’s national sales office — one of the largest conference and event booking teams in the world.

The head of Resorts World Las Vegas added that the partnership allows it to leverage Hilton’s “extensive resources,” including team member training and operational guidelines such as the CleanStay program.

“We believe it will be a great foundation for creating the cleanest, safest resort experience in Las Vegas,” said Resorts World Las Vegas President Scott Sibella.