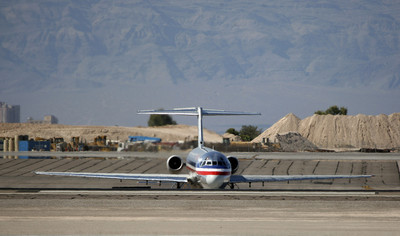 Runway reconstruction at McCarran International Airport could worsen flight delays this winter, but forecasts of frequent and widespread chaos on the ramp are greatly exaggerated, aviation officials said Friday.

That’s what Clark County Aviation Director Randall Walker told journalists seeking information on reported delays since Nov. 1 when workers began a reconstruction project on one of McCarran’s four runways. It should be complete by May 1.

Delays on consecutive Sundays were the result of unusual weather patterns that forced air traffic controllers to direct aircraft into less-efficient pathways for arrivals and departures, a situation worsened by construction on runway 25L/7R.

Walker said complaints and false assumptions by airline flight attendants about the situation made their way onto blogs and into television reports, leading to widespread exaggerations about problems for folks flying to and from Las Vegas.

He acknowledged that the runway project restricts options controllers have for configuring arrival and departure routes. But he also said the restrictions are only a factor when winds are strong from the southwest or in other unusual conditions.

"When this happens there will be delays for arriving and departing aircraft," Walker said. "The weather is the wild card we can’t control."

Workers embarked on a planned six-month project to resurface the runway in November.

The work was scheduled to take place in the winter months because that’s when the type of winds that restrict operations are less likely.

Still, on consecutive Sundays the winds have kicked up and forced controllers to use configurations that are limited by the construction.

Typically, McCarran can handle as many as 60 arrivals and 64 departures per hour. But those figures can drop by half if conditions are unfavorable, Walker said.

Ian Gregor, a spokesman for the Federal Aviation Administration, said controllers are responding to the construction with configurations that can accommodate 48 and 54 arrivals per hour, respectively.

The timing of unfavorable winds can also be a factor, Walker said. Airport traffic is typically lightest on Wednesdays and Saturdays, heaviest on Thursdays and Sundays.

"If it is very strong southwest winds on a Sunday, it is going to be a long day," Walker said.

Although there’s a chance the work could result in sporadic flight delays, delaying the project could be worse.

If the runway were to fail at an inopportune time it could create worse delays than a planned reconstruction because airlines, construction firms and airport workers wouldn’t have time to make plans to minimize inconvenience, he said.

The aging asphalt runway has been in service since at least 1991. Walker said the plan is to replace the asphalt with a concrete surface that’s more durable and will hold up better to aircraft weighing as much as 450 tons and moving at about 150 mph. One runway was resurfaced a year ago; there are no plans to resurface the other two for at least five years.

The new concrete surface will also require less maintenance, which could reduce delays in the long-term.

"Anyone who lives here in the summer knows what the heat can do and it is not kind to asphalt," Walker said.