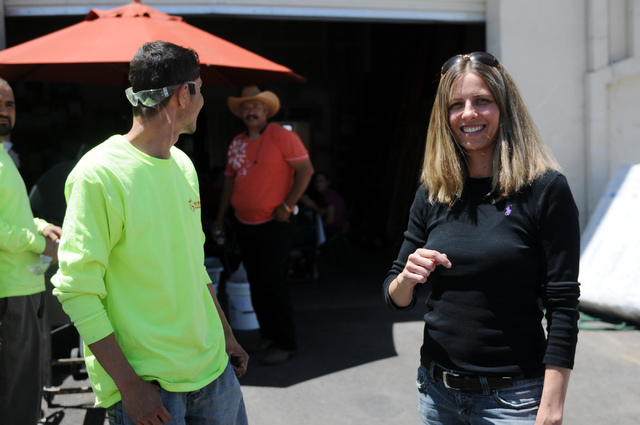 Rebecca Merrihew, co-owner of Red Rock Insulation in Las Vegas, poses for a photo at their warehouse Friday, May 9, 2014. (Erik Verduzco/Las Vegas Review-Journal) 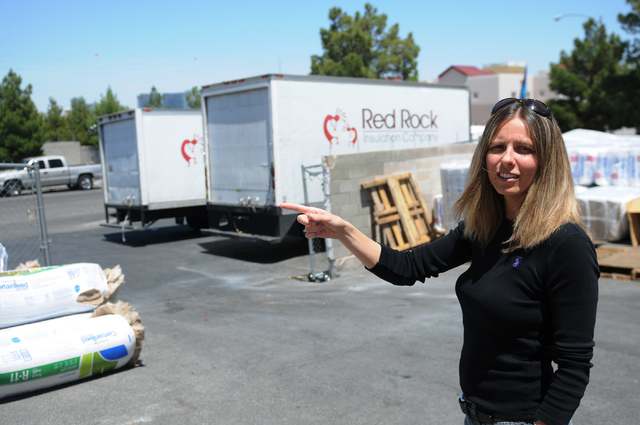 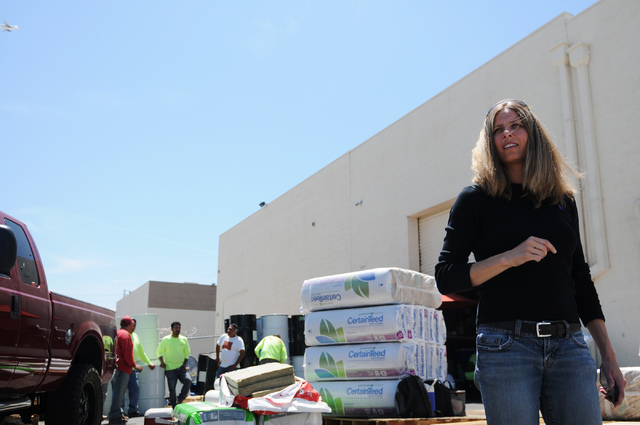 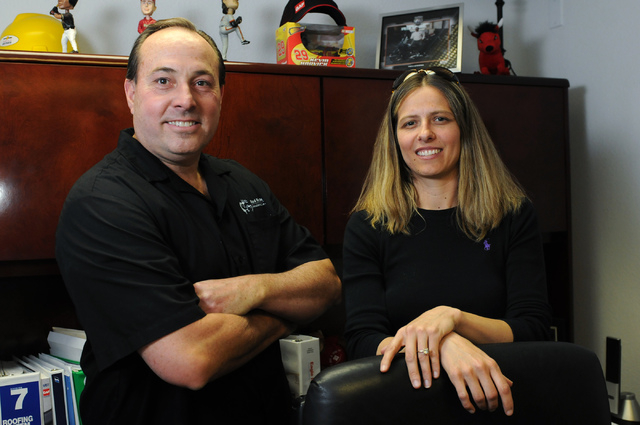 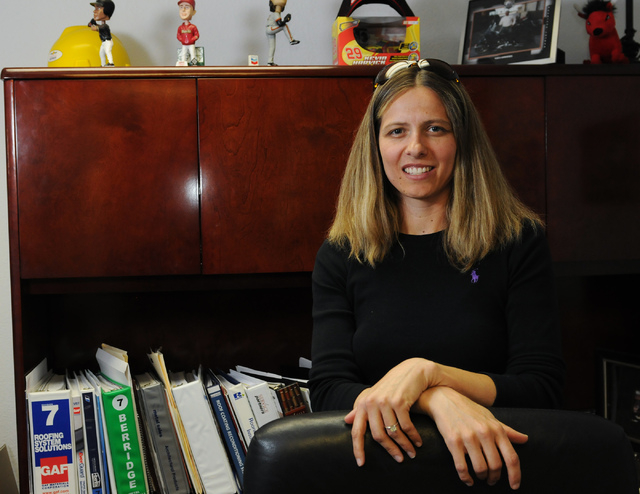 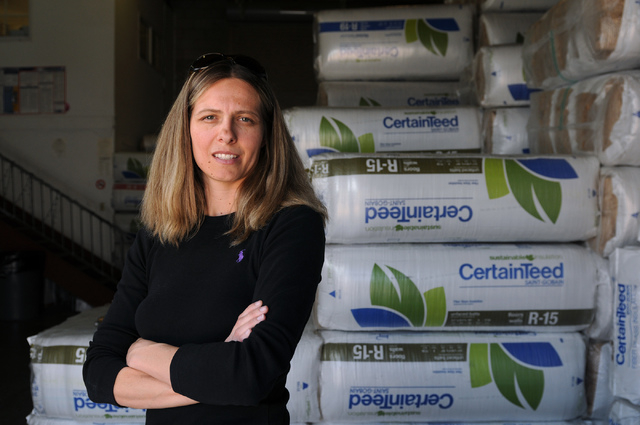 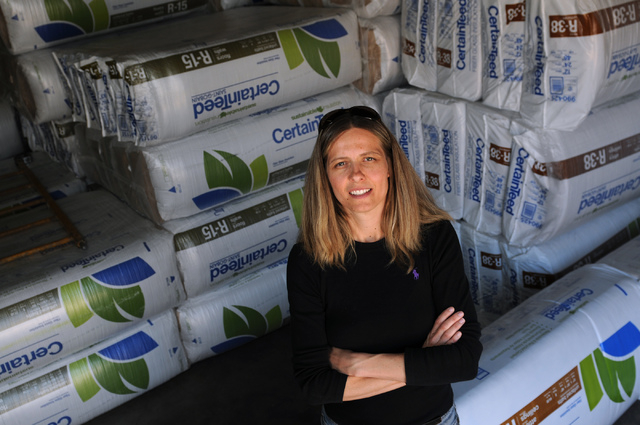 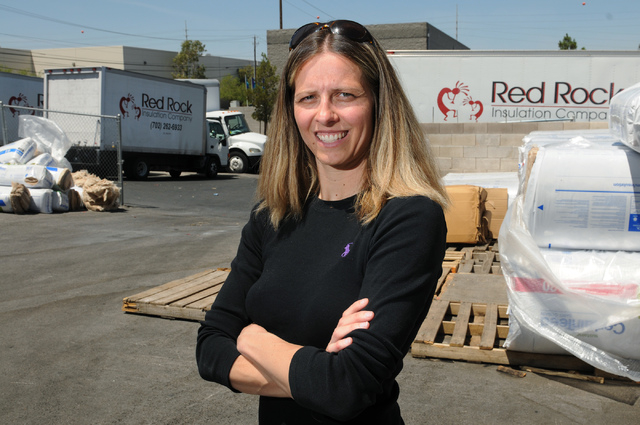 Should voters approve a 2 percent tax on businesses earmarked for Nevada public schools, Rebecca Merrihew fears that she could lose the company she has owned for 15 years.

If she tries to pass along that cost to customers, she said, some may look for business with another contractor.

“It may or may not put me out of business,” said Merrihew, Red Rock Insulation’s president. “Or I may have to start firing people because I can’t afford to pay the employees. This is a job crusher, this is not a job creator.

The initiative, which proponents call The Education Initiative and opponents have dubbed the margins tax, is Question 3 on the November ballot.

Approaching the final six-month stretch before a vote, more and more Nevada business owners, backed by an array of business groups, are expressing opposition.

The tax would apply to companies that report an annual gross revenue of more than $1 million, even if a business shows no profit on the year.

The tax, backed by the Nevada Education Association, is expected to raise $400 million to $750 million a year. That money would be earmarked for public education.

The Nevada AFL-CIO originally supported the measure and helped get it on the ballot, but voted earlier this month to oppose it. Although proponents have said that most of the money from the tax would come from large business, mostly operated out of state, Republican Gov. Brian Sandoval has predicted a “fatal blow” to small businesses such as Merrihew’s.

AN ARGUMENT FOR CREATING JOBS

Dan Hart, a political consultant with the Education Initiative PAC, said the measure would create thousands of teaching jobs across the state.

Hart and other proponents are talking to voters about Question 3 every day, encouraging people to discuss the issue with friends, neighbors and colleagues.

“Our campaign is a grass-roots effort,” he said. “The most powerful and important banker has as many votes as the single mother who has two kids in the school system. This is an opportunity to make sure the community has some self-determination in what happens.”

The central committees of both the state and Clark County Democratic Party have endorsed the measure.

Margins tax opponents say the proposed levy could send Nevada’s recovering economy back into another recession.

Earlier this year, the Economic Development Authority of Western Nevada, which covers the Reno, Sparks and Tahoe areas, voted to oppose the ballot initiative. Mike Kazmierski, the group’s president and CEO, said it’s one of the few issues on which they’ve taken a stand.

“Plenty of companies have communicated to us their serious concern and made it clear that they will relocate if the margins tax passes,” Kazmierski said. “Additionally, our entrepreneurial community, especially startups, believe the margins tax will destroy their ability to grow a company in Nevada.”

Laura Zander, CEO and co-founder of Reno-based Jimmy Beans Wool, said her company moved its headquarters to Nevada about 10 years ago because California’s corporate taxes were too high.

She said if the margins tax is approved, the company, which recorded about $7.5 million in revenue in 2013 and employs 36 people, would likely look to yet another state.

“We moved here because of the beneficial tax, and we like it here,” Zander said. “But not enough to stay somewhere we’re not from and not enough to keep our business here. We simply couldn’t afford to operate here anymore.”

Under the proposed initiative, Dutra estimated that he could pay as much as $140,000 for both of his companies.

“All the sudden you get to the end of the year, and you haven’t made any money, or very little for the amount of risk that you have to take,” he said.

This summer, he plans to “push hard” to try defeating the tax.

“That’s the one that’s affected the most, but it’s also the one I can move the easiest,” he said.

Prospective western Nevada companies in manufacturing and technology threatened to take their business to other states, Kazmierski said, although he declined to identify them.

The group’s Southern Nevada counterpart, the Las Vegas Global Economic Alliance, is “looking into and evaluating the potential impacts of Question 3,” but the board hasn’t taken a public stance on the issue, spokesman Andrew Doughman said.

‘THIS ISN’T THE SOLUTION’

The teachers union calls the initiative “predictable dedicated K-12 revenue.” But opponents fear that if the tax is approved lawmakers could decide to move money from the state’s school account to another part of the budget, negating the money from the tax.

“We all want our children to have a good education, but this isn’t the solution,” said Karen Griffin, spokeswoman for the Coalition to Defeat the Margin Tax Initiative.

The proposal gives business owners three deduction options: take 30 percent from gross revenue, meaning 70 percent of revenue would be taxed at 2 percent; salaries up to $400,000; or the cost of goods and services.

“That’s the problem with this bill: 2 percent is a lot of money on revenue,” Merrihew said. “I have to pass this on to the consumer. I have to include it in every job I do, and I’m increasing the cost of goods to the consumer.”

The tax could be the equivalent of two or three of her 35 employees.

“From the recession, just this year, we started to see more positive signs of a healthier economy,” Merrihew said. “And now to have this on your plate, you wonder if you’re even going to make it.”

Jack Mallory, governmental affairs director for the International Union of Painters and Allied Trades District Council 15, said the group was “deeply concerned” about how the tax could trickle down to workers.

The union represents about 3,000 painters, drywall workers, glaziers, glass workers and floor coverers in Southern Nevada, and the tax could be a heavier burden on contractors who operate on a narrow profit margin.

“There are so many unknown things about this proposal, it’s impossible to tell what the impact will be primarily on our industry, let alone what the secondary impact is going to be,” Mallory said.

If small businesses suffer, that could hurt the bottom line at Meadows Bank, which focuses on small-business loans and employs about 105 people.

“It’ll have a huge impact,” Menon said, although he did not envision having to lay anyone off because of the tax. “It’s like any other expense that affects your bottom line. When that happens, it just has a negative impact on growth.”

Bank of Nevada President John Guedry has spoken out against the tax on behalf of the Las Vegas Metro Chamber of Commerce.

He agrees with Menon.

“The indirect (impact) is actually our bigger concern,” Guedry said. “We’re a business bank, so anything that’s bad for business or business growth is bad for us.”