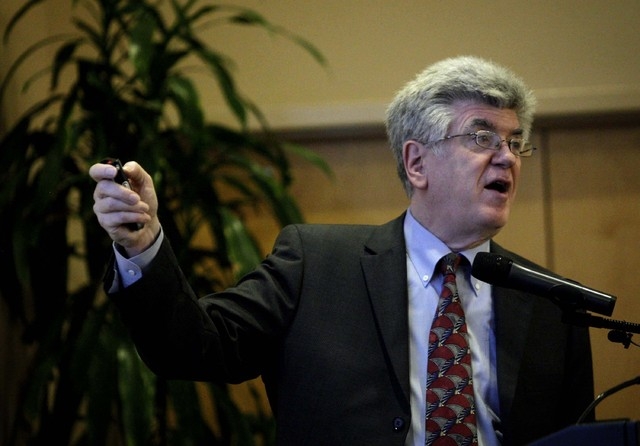 Stephen P. A. Brown, chief economist at the center for Business and Economic Research at UNLV, said Tuesday the U.S. economy is on the cusp of acceleration and Nevada is returning to its long-term trends, which generally have been healthier than the rest of the nation. Brown is shown in this Thursday, July 11, 2013, photo as he presents the 2013 midyear economic outlook on UNLV's campus. (Jessica Ebelhar/Las Vegas Review-Journal)

Southern Nevada’s economy will continue to strengthen through 2014 as tourism, gaming, construction and the housing industries plod toward pre-recession levels.

Current trends indicate the region is continuing its fourth year of recovery from the economic downturn that hurt Nevada worse than any other state, said Stephen Brown, director of the Center for Business and Economic Research at the University of Nevada, Las Vegas.

Brown said the U.S. economy is on the cusp of acceleration and Nevada is returning to its long-term trends, which generally have been healthier than the rest of the nation.

Visitor volume and gaming revenue are climbing at rates of less than 3 percent with Strip resorts supporting the bulk of the growth.

In 2013, Southern Nevada visitation fell less than a half percent from 2012’s record level. This year, volume is on a record pace and is expected to eclipse 40 million people for the first time. March, Brown noted, was Southern Nevada’s best-ever tourism month.

Still well below the $1.1 billion in average monthly gross gaming revenue levels of late 2007, amounts have slowly climbed from a low point in 2010 to a more than $900 million monthly average in 2014.

Brown noted that tourism and gaming continues to be driven by the Strip.

“It’s been established that the closer you are to the Las Vegas Strip, the bigger the share you’re getting,” he said. “As you move away from the Strip to other parts of Las Vegas, to other parts of Clark County and all of Nevada, the growth isn’t quite as strong.”

Brown, who attributes slow growth in gaming revenue to increased industry competition nationwide, is forecasting a 3.2 percent increase in revenue in 2014 and 3.7 percent in 2015.

After a collapse in housing construction from 2007 to 2010 and languishing levels through 2012, the rate of new housing permits issued in Clark County is finally starting to rebound.

Brown also said vacancy rates in retail, office and industrial real estate have begun to fall with retail and industrial space at just over 11 percent and office vacancies at 22.7 percent.

Housing prices are on the rise with Las Vegas prices up 44.8 percent since hitting bottom in early 2012. A lack of single-family housing supply is pushing up housing prices.

Nevada still has the highest percentage of homeowners that are underwater on their mortgages, but the number is slowly declining. In 2014’s first quarter, 29.4 percent of Nevada homeowners had negative equity, an improvement from the 45.4 percent in the first quarter of 2013.

Nevada’s unemployment roller-coaster ride is continuing and currently is on an upswing.