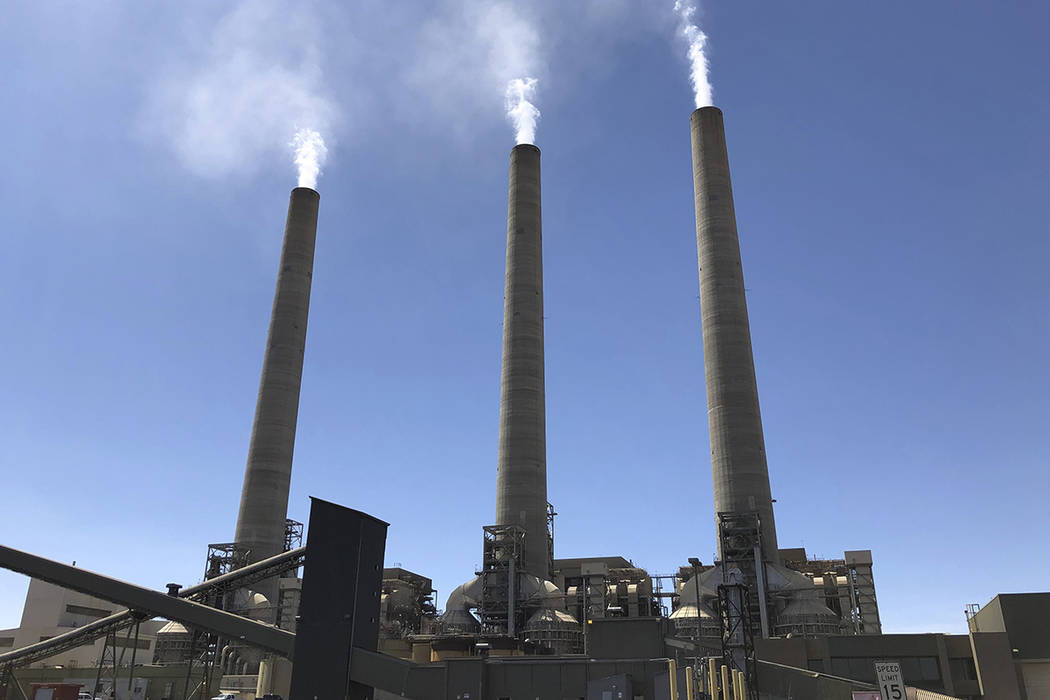 This Aug. 20, 2019, image shows a trio of concrete stacks at the Navajo Generating Station near Page, Ariz. The power plant will close before the year ends, upending the lives of hundreds of mostly Native American workers who mined coal, loaded it and played a part in producing electricity that powered the American Southwest. (AP Photo/Susan Montoya Bryan)

Early Monday afternoon, Arizona-based plant operator Salt River Project shut down all three units of the Navajo Generating Station, one of the largest coal-fired power plants in the Southwest. The facility is owned, in part, by NV Energy.

Located on the Navajo Nation east of Page, Arizona, the plant had been generating electricity for millions of people across the West for more than 40 years. The owners determined in 2017 that it would no longer be economical to continue operating the 2,250-megawatt power plant, according to a Monday news release from Salt River Project. Salt River Project pointed to changing economics of the energy industry, including record-low natural gas prices and the growth of renewable resources.

NV Energy had been planning to exit its ownership of the plant at the end of the year as part of its plan to fully eliminate coal generation in Southern Nevada, according to a Monday statement from the utility. The generating station’s owners also include Salt River Project, Arizona Public Service Co. and Tucson Electric Power. The United States is also a participant in the plant.

The Nevada utility began retiring coal plants in 2005, with the closure of the Mohave Generating Station in Laughlin. It shut down its last coal-fired plant in Southern Nevada, the Reid Gardner Generating Station 50 miles northeast of Las Vegas, in March 2017.

“NV Energy is leading the way in reducing its emissions by changing our generating portfolio and developing more renewable energy,” said NV Energy president and CEO Doug Cannon in the release. “With this announcement, we have reached one of our goals by eliminating all NV Energy owned-coal generation serving southern Nevada. This represents another major step toward serving our customers energy needs in a more environmentally sustainable way.”

A number of U.S.-based contractors will lead the demolition and reclamation of the site. Salt River Project expects the decommissioning to take about three years to complete, with more than 90 percent of the decommissioned plant considered salvageable. Decommissioning is expected to cost the plant’s owners around $150 million.

The owners will also make $110 million in lease payments to the Navajo Nation under a 35-year extension lease. This will allow continued access to the site for decommissioning, long-term monitoring and ongoing operations of the transmission system, according to Salt River Project’s release.

The Navajo Nation will retain a number of facilities at the plant, including the warehouse and maintenance buildings, lake pump system and railroad, which are valued at $18 million. The federal government has pledged to provide 500 megawatts of transmission capacity from the plant’s transmission station, valued at more than $80 million.