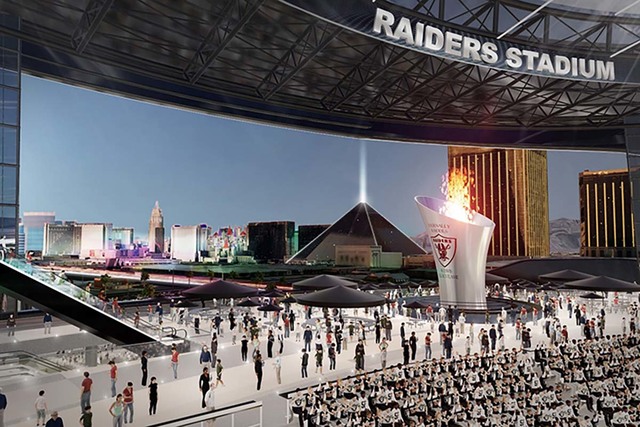 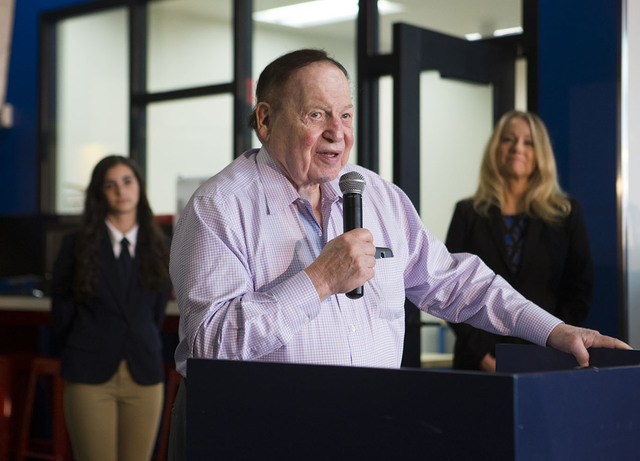 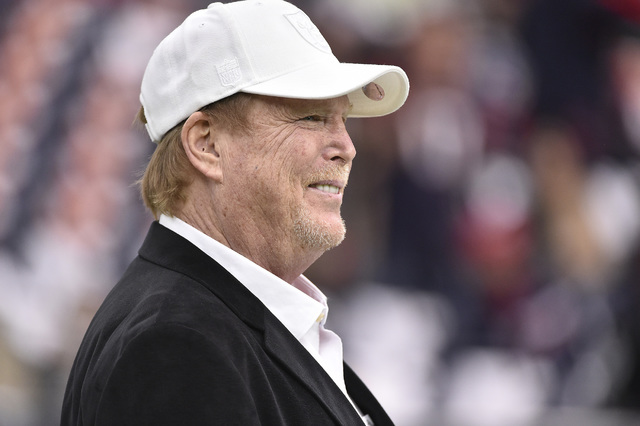 Raiders owner Mark Davis watches teams warm up before the first half of an AFC Wild Card NFL game between the Houston Texans and the Oakland Raiders, Saturday, Jan. 7, 2017, in Houston. (Eric Christian Smith/AP)

And there’s no shortage of answers within the text of the Southern Nevada Tourism Improvements Act, passed by the Nevada Legislature and signed into law by Gov. Brian Sandoval in October.

Here are 10 key questions and answers about what lies ahead for the project at the center of the Oakland Raiders’ request to relocate to Las Vegas:

1. Does the legislation require the Adelson family’s involvement? No. No names are attached to the process. The law has a role for a “development partner,” defined as a “person who provides money to pay the costs of the acquisition, construction, leasing, improvement, equipping, operation or maintenance … of the National Football League stadium project or the cost of any capital improvements to the National Football League stadium project.”

2. Does the legislation require the Raiders’ involvement? No. The Raiders also come to the table as a potential “development partner.” If the Raiders’ relocation bid fails, another NFL team could pursue a move to the Las Vegas stadium under the law.

3. If the Raiders can’t find a new partner, would any other NFL teams be interested in moving to Las Vegas? That’s unclear. The league has had an unusual amount of instability in the past few years, with the St. Louis Rams returning to Los Angeles in 2016, the Raiders contemplating their move to Las Vegas and the San Diego Chargers moving to Los Angeles last month. Most franchises are stable and have relatively new stadiums and loyal fan bases. But a handful of teams — the Jacksonville Jaguars, for example — have seen declining interest from their fans and could be candidates for relocation.

4. If the Raiders can’t find enough investors to replace the $650 million withdrawn by the Adelsons, can the cost and scope of the domed stadium be reduced? Yes. Nothing in the legislation mandates the size, cost or scope of the project, other than meeting the standards of an NFL team.

5. Is the hotel room tax for the stadium already being collected? The 0.88 percentage-point increase in the Clark County hotel room, which will be used to repay $750 million in bonds if stadium construction commences, takes effect March 1. Revenues will flow into an account managed by Clark County. County Treasurer Laura Fitzpatrick is a non-voting member of the board of the Las Vegas Stadium Authority, the entity created by the law to oversee the dome’s development and manage the stadium if it’s built.

6. What is the deadline for an NFL team to relocate to Las Vegas? Under the legislation, the Las Vegas Stadium Authority has 12 months from the “effective date” of the law — interpreted as the date Gov. Brian Sandoval signed it — to have a signed lease agreement with an NFL team. The authority board can extend that to 18 months if “necessary or desirable.” That puts the hard deadline for a team lease at April 16, 2018.

7. If the NFL stadium plan collapses in 2018, what happens to the Las Vegas Stadium Authority? The authority would disband once the deadline passes for securing an NFL lease. But the death of the authority would trigger the start of planning for a smaller football stadium for UNLV if the school’s president commits to it. The Rebel football team currently plays in Sam Boyd Stadium, which is too far from the Las Vegas Strip and too outdated to be better utilized for big concerts and tourism-oriented special events. Planning for that stadium would fall to the Campus Improvement Authority, which includes members of the state Board of Regents. The university would have two years to raise $200 million in donations, and $300 million in room tax revenues would be shifted to the university, which envisions a stadium with about 40,000 seats. Would it be a dome? That would depend on how much money is raised and would be up to the Campus Improvement Authority.

8. Would a UNLV stadium be located on campus or on the same site under consideration for the Raiders stadium, near I-15 and Russell Road? That’s undecided, but the university has always wanted an on-campus stadium for its team and it’s the Raiders that have the purchase option on the Russell Road property. If it’s an open-air stadium, there could be fewer concerns about height restrictions and proximity to McCarran International Airport, although airport officials and the FAA have discouraged stadium development because of stadium event distractions and traffic as well as height restrictions.

9. Does the Nevada Legislature have any role in the stadium plan at this point? Or does the Las Vegas Stadium Authority hold all the cards? Existing legislation covers the possibility of the NFL stadium falling through, but state Senate Majority Leader Aaron Ford has indicated lawmakers could act to amend the law if that happens. So while the authority oversees things now, that would change if the Legislature acts.

10. If UNLV cannot raise $200 million in two years, what happens to the room tax? The room tax would be reduced from 0.88 percentage points to 0.375 percentage points as soon as the Stadium Authority abandons the NFL plan. If UNLV can’t raise its funding, the tax would be eliminated and the accumulated revenue would be directed to the Las Vegas Convention Center $1.4 billion expansion and renovation project.

4
Will Senate convict Trump at impeachment trial? Bet on it