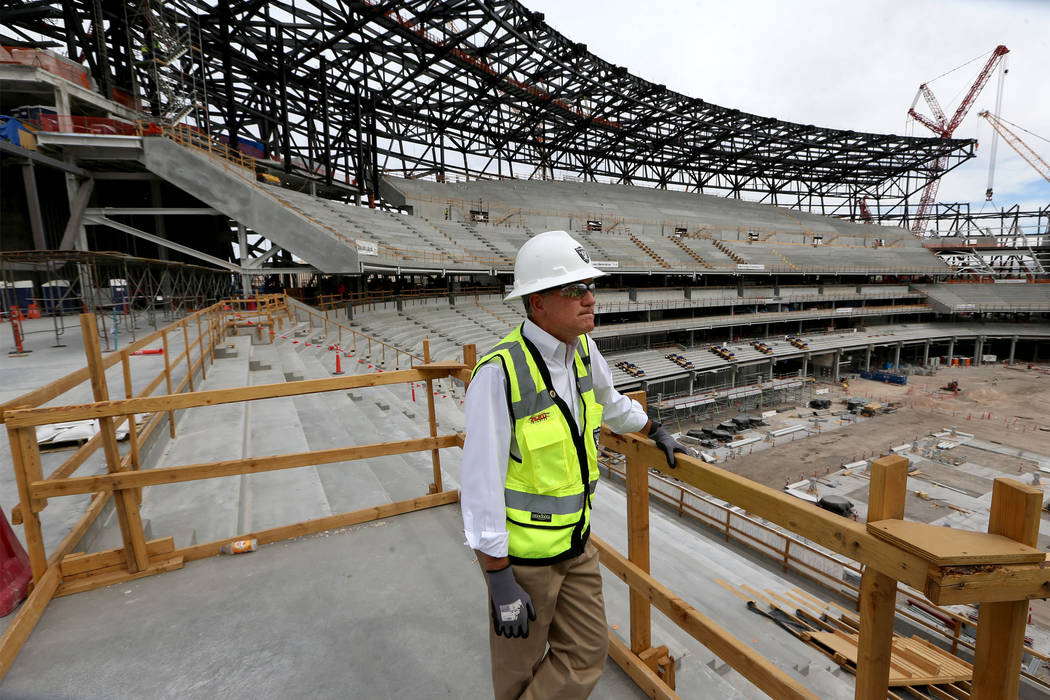 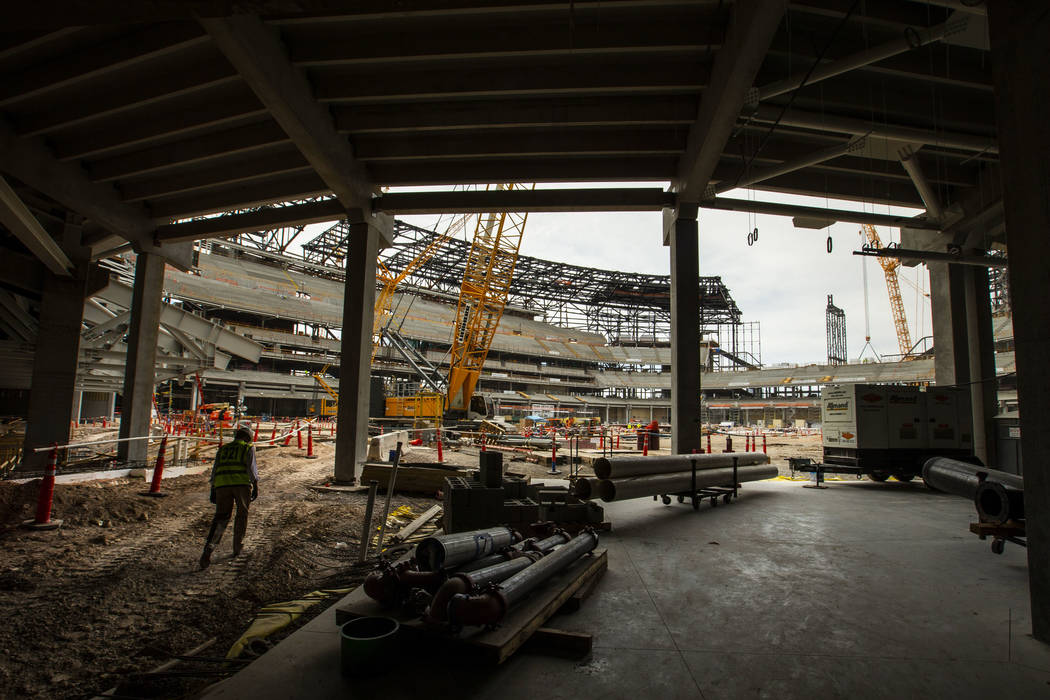 Panoramic view of the interior of the Raiders Stadium as construction continues on Tuesday, June 25, 2019, in Las Vegas. (L.E. Baskow/Las Vegas Review-Journal) @Left_Eye_Images 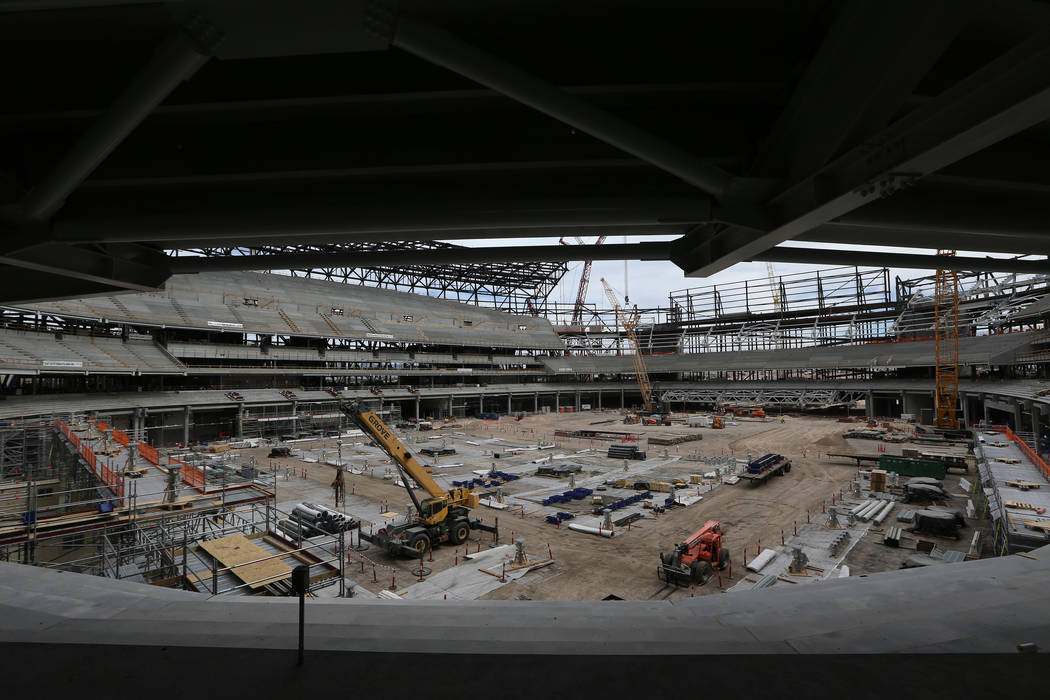 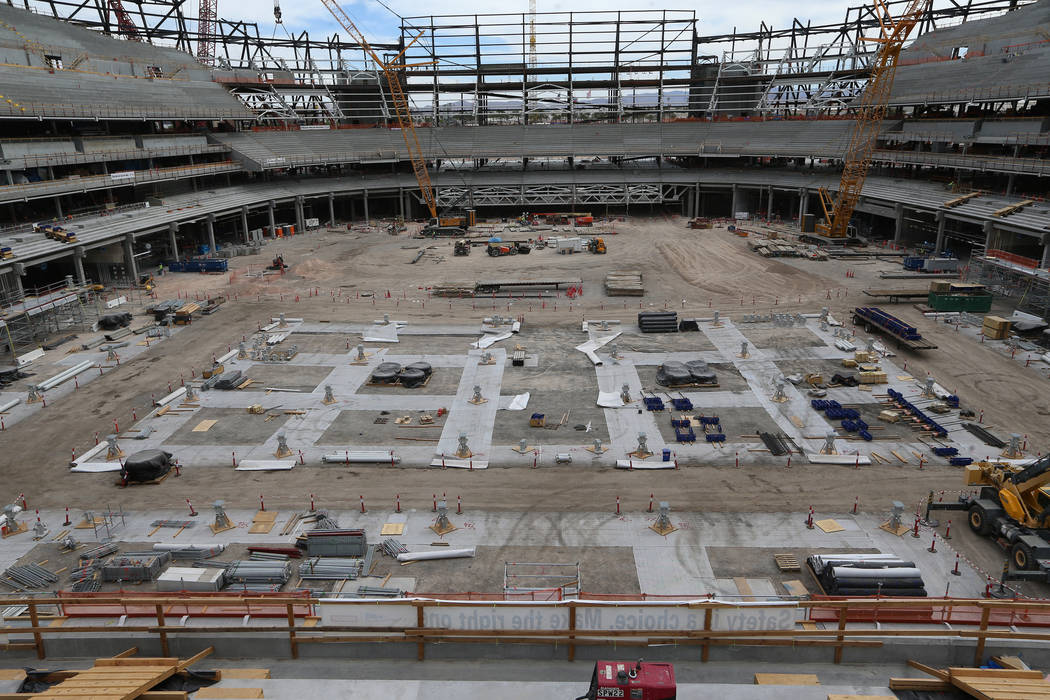 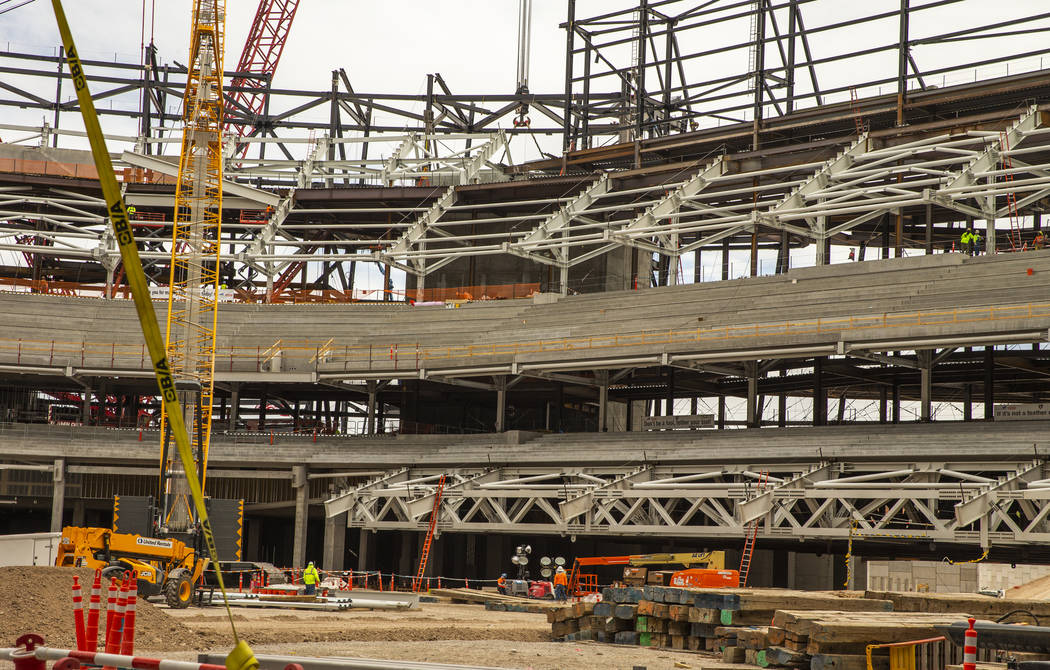 Platforms are being installed which will hold seating in the Raiders Stadium as construction continues on Tuesday, June 25, 2019, in Las Vegas. (L.E. Baskow/Las Vegas Review-Journal) @Left_Eye_Images

Panoramic view of the interior of the Raiders Stadium as construction continues on Tuesday, June 25, 2019, in Las Vegas. (L.E. Baskow/Las Vegas Review-Journal) @Left_Eye_Images 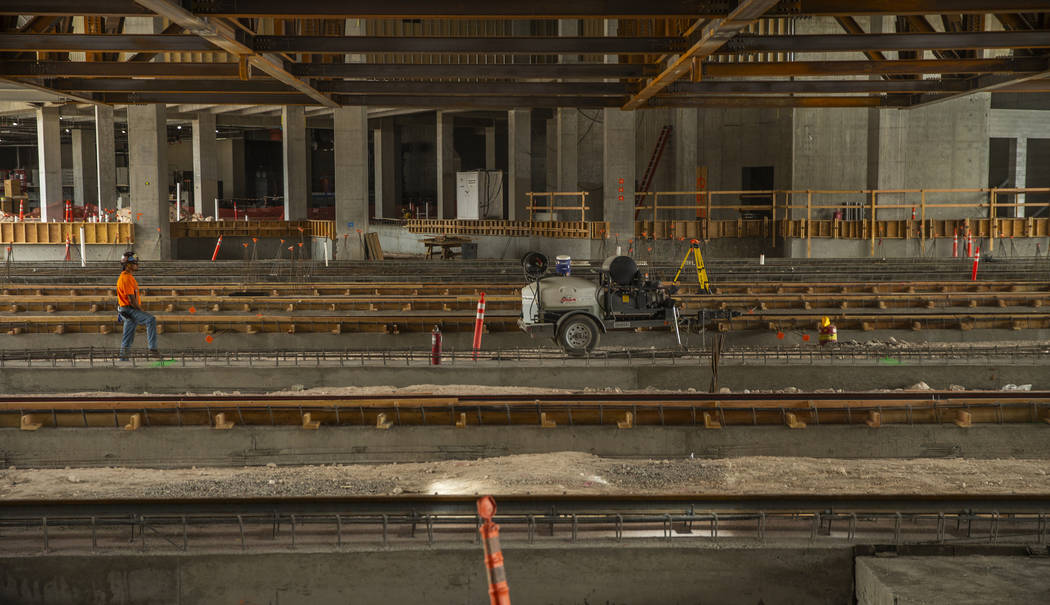 Tracks are being layed down which will be used to maneuver the grass field in and out of the Raiders Stadium as construction continues on Tuesday, June 25, 2019, in Las Vegas. (L.E. Baskow/Las Vegas Review-Journal) @Left_Eye_Images 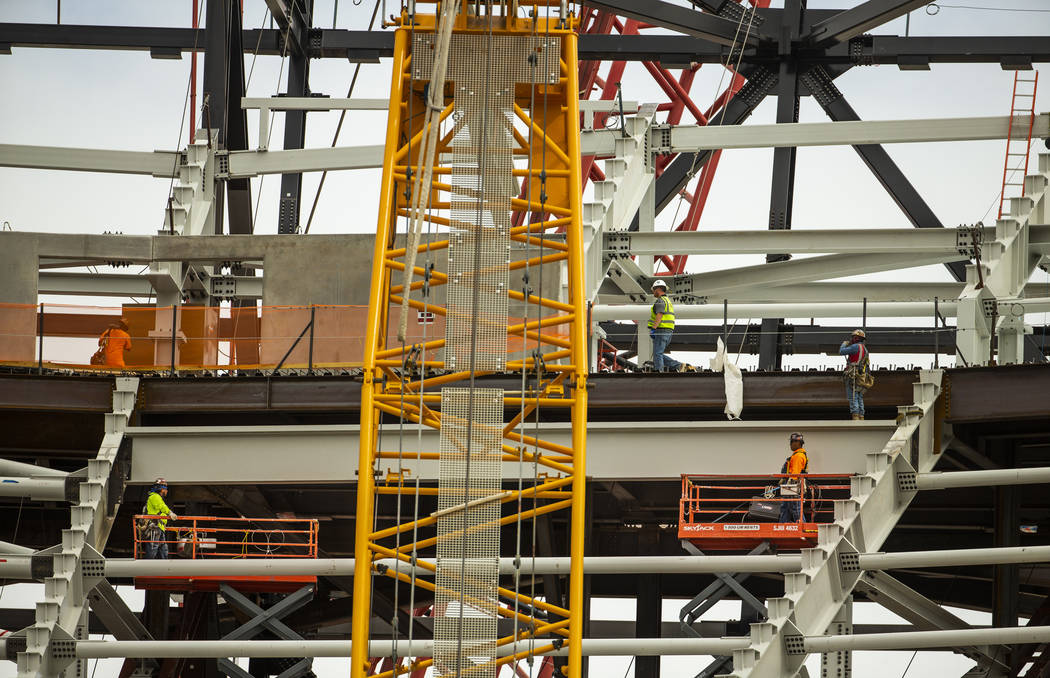 Steelworkers maneuver about the interior of the Raiders Stadium as construction continues on Tuesday, June 25, 2019, in Las Vegas. (L.E. Baskow/Las Vegas Review-Journal) @Left_Eye_Images 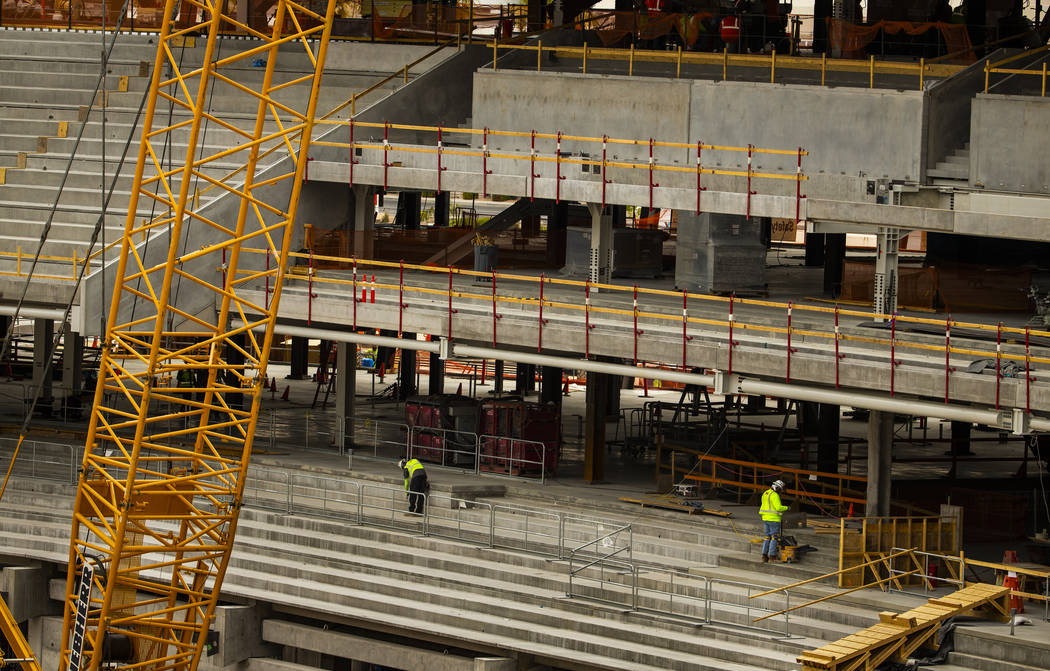 Platforms are being installed which will hold seating in the Raiders Stadium as construction continues on Tuesday, June 25, 2019, in Las Vegas. (L.E. Baskow/Las Vegas Review-Journal) @Left_Eye_Images 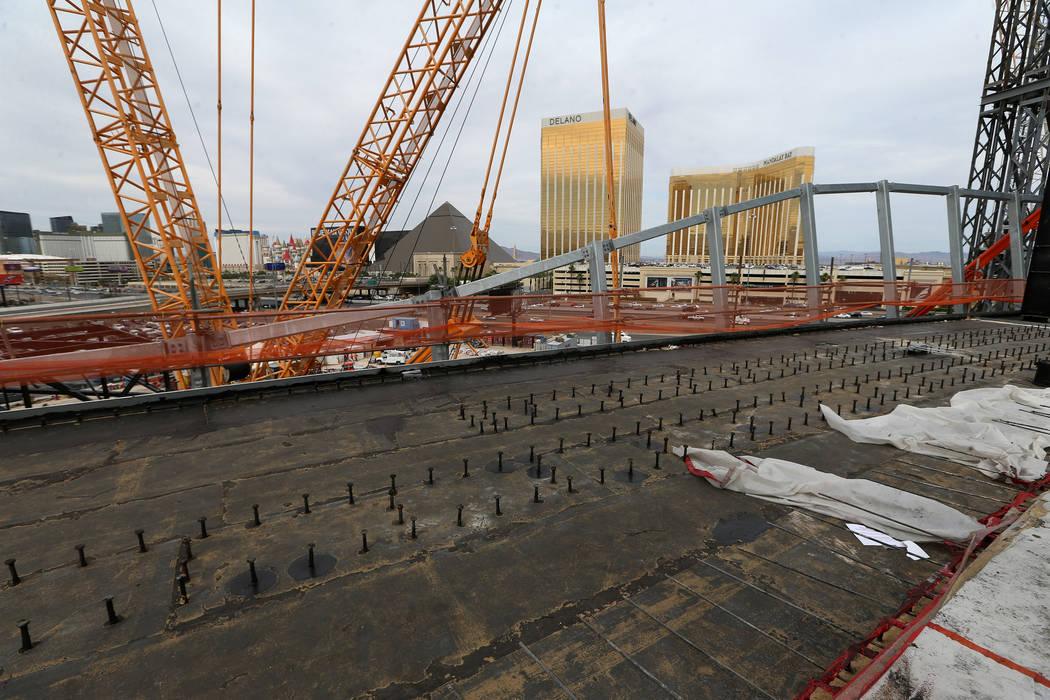 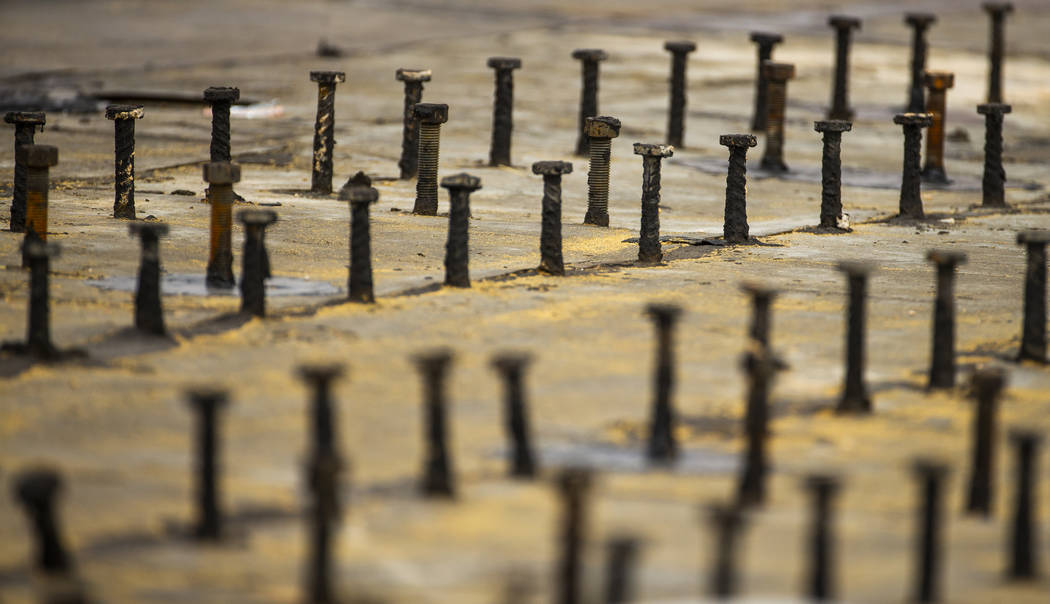 Bolts are in place for the tracks which will hold sliding glass doors on an event space overlooking the city within the Raiders Stadium as construction continues on Tuesday, June 25, 2019, in Las Vegas. (L.E. Baskow/Las Vegas Review-Journal) @Left_Eye_Images 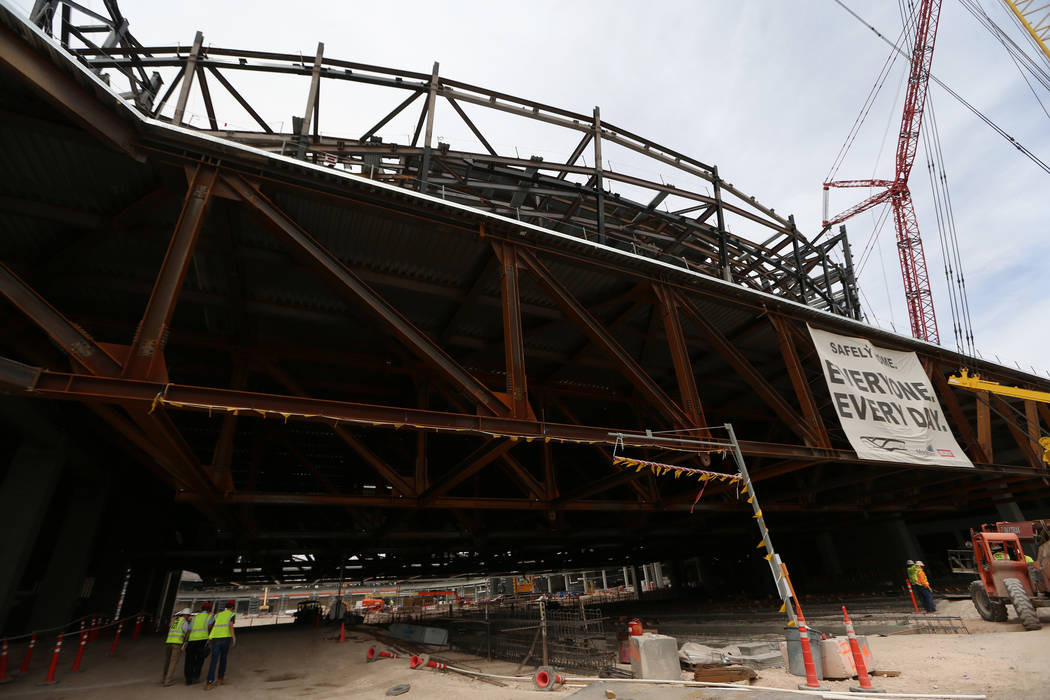 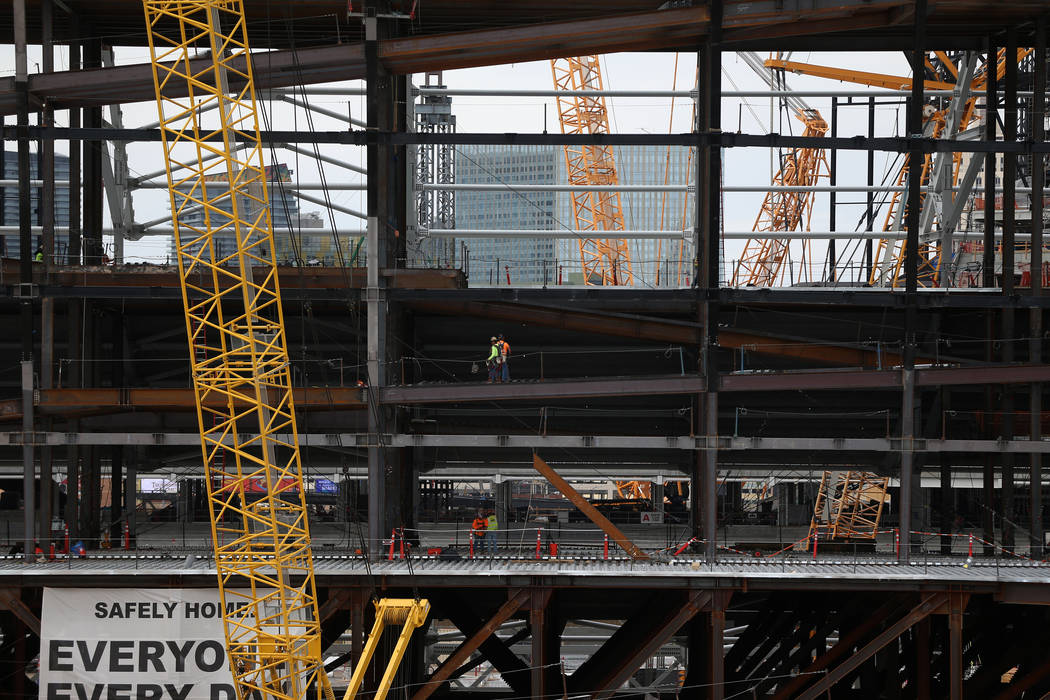 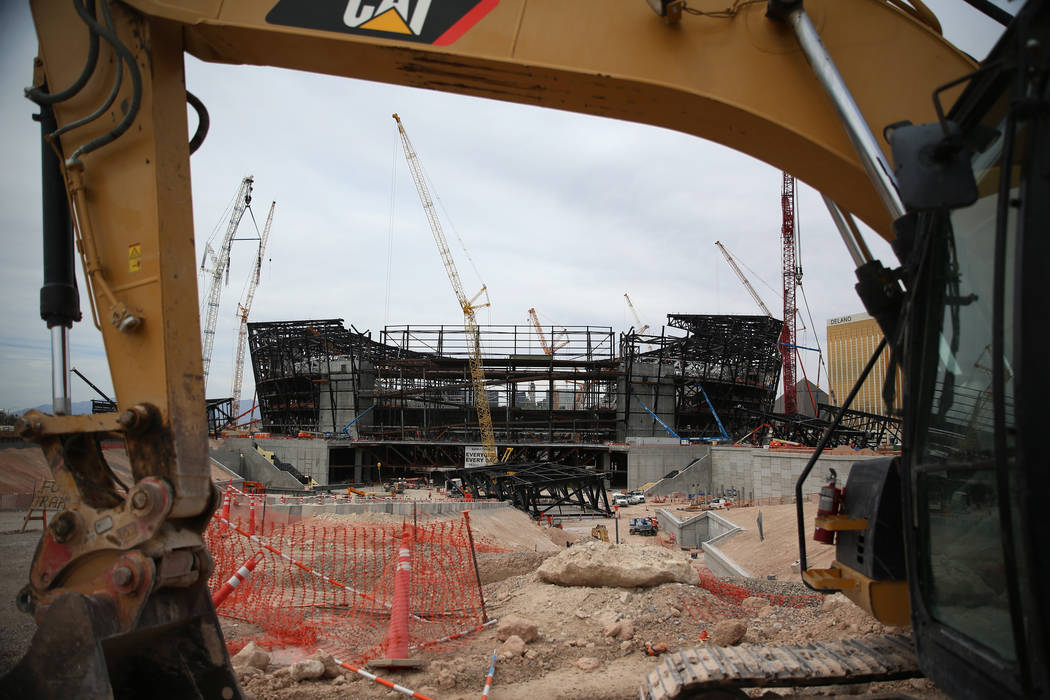 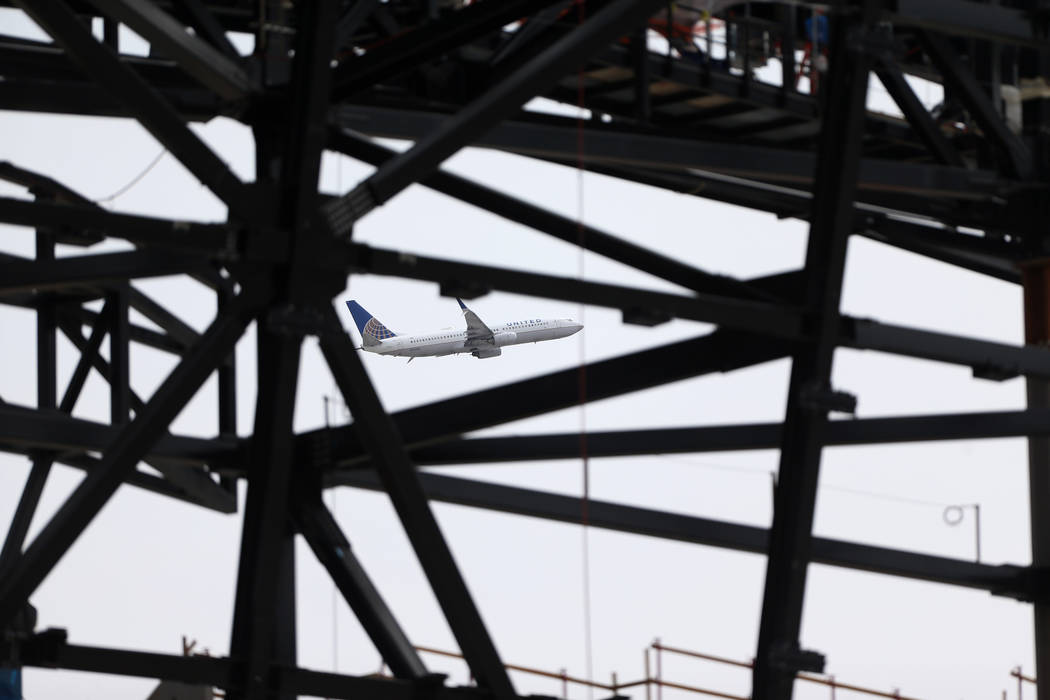 AEG Facilities, a division of venue and live-entertainment company AEG, will manage the new Las Vegas stadium when it opens next year.

The company announced Tuesday that the co-owner and operator of T-Mobile Arena would oversee operations at the $1.8 billion, 65,000-seat stadium being built by the Oakland Raiders through a public-private partnership with the state.

Terms and the length of the agreement were not announced.

As part of a comprehensive management agreement, Los Angeles-based AEG Facilities will be responsible for stadium operations. That begins with providing pre-opening functions, including overseeing the hiring and training of the venue’s full-time staff and planning and executing the stadium’s grand opening schedule of events and activities. Meanwhile, AEG will manage key departments such as guest services, event operations, booking, security, ticketing, finance and human resources.

Because of AEG’s relationship with other venues worldwide and its affiliation with other AEG subsidiaries, the agreement is expected to enable the stadium to book concerts and other special events or tours.

AEG also operated the Colosseum at Caesars Palace. That venue will be undergoing a renovation this summer and AEG will relinquish its relationship with the venue when it reopens.

“We are honored to have the opportunity to partner with one of sports’ most recognizable, successful and iconic international brands and with a city known as the ‘sports and entertainment capital of the world’ in a stadium destined to set new standards for the fan experience that will be created,” Bob Newman, president, AEG Facilities, said in a release issued Tuesday.

“The addition of the Las Vegas stadium into our global stadia network will provide immediate opportunities to bring new high-profile events to Las Vegas to take advantage of the incredible new stadium and a city that knows how to deliver best-in-class experiences and events,” Newman said.

LIVECAM:
Monitor the progress of Las Vegas Stadium in this view looking south toward the construction site.