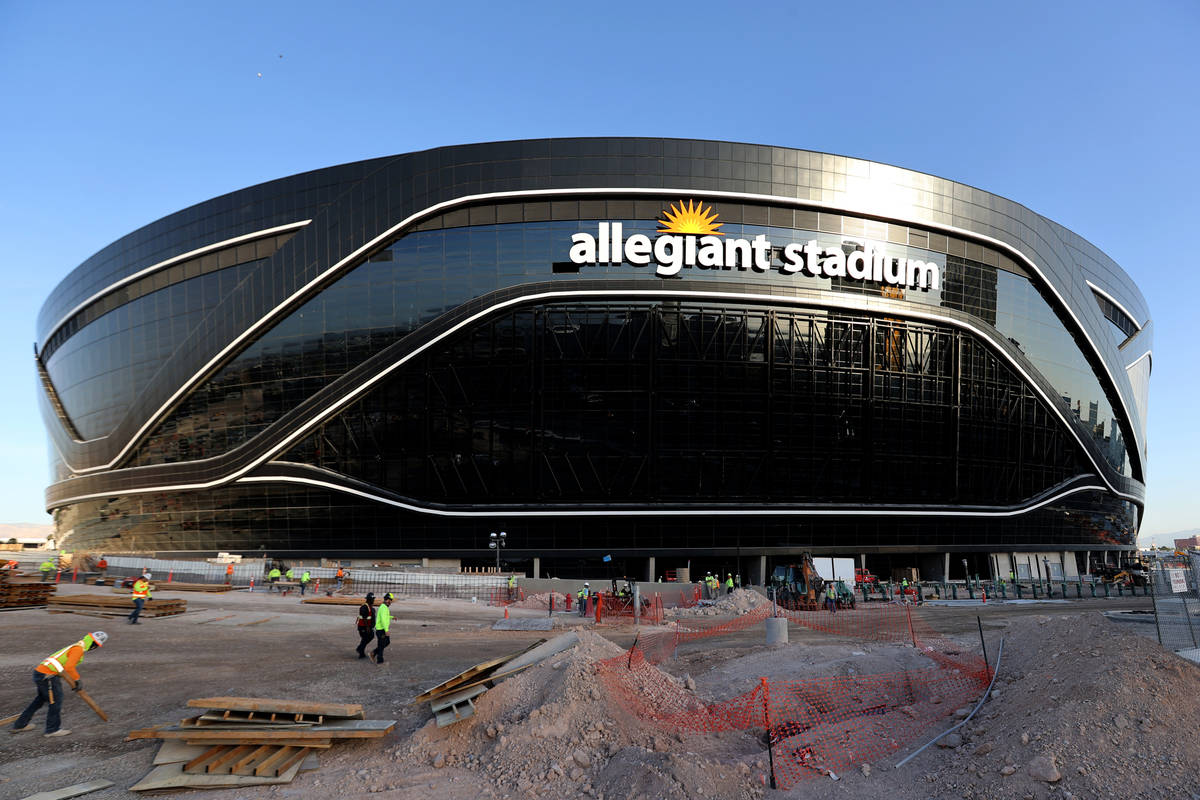 When the Las Vegas Stadium Authority meets Thursday, it will have been 126 days since the board last got together.

Plenty has happened at Allegiant Stadium since Jan. 16.

Construction has continued its swift pace. Engineers figured out that troublesome roof and installed it earlier than many had expected.

The massive field tray was built and turf has been unrolled on top of it.

Landscaping and paving have occurred in areas surrounding the stadium.

Lights and logos have been placed and the sleek sports car look has been tested out at night.

Schedules have been released by the National Football League and UNLV, and fans have begun circling dates on their calendars.

Inside the 65,000-seat stadium, some luxury boxes have been finished and others framed and seats have been installed.

Locker rooms have been built and a ticket office is being fabricated off site.

It’s actually coming together as the NFL stadium contractors promised.

But there’s still plenty of work to do and a new timeline is in place — when the authority meets, it will be 71 days before scheduled substantial completion of the venue.

While the authority will tackle a 20-item agenda when it meets virtually at 1 p.m., it’s still unlikely to get an answer to the biggest question confronting members: Will fans get to enjoy the features of this $2 billion sports palace once the Raiders and the Rebels take the field?

While more than 4,000 craftsmen and construction workers have diligently pieced together the thousands of tasks necessary to build the stadium from the ground up, the coronavirus was spreading like a summer wildfire across the United States.

There have been seven reported cases of COVID-19 among stadium workers, leading some critics to question the wisdom of Gov. Steve Sisolak’s decision to allow construction to continue as an essential business.

Joint venture general contractors Mortenson Construction and McCarthy Builders were far ahead in their planning to prevent supply chain delays once the virus hit with a vengeance.

But updates and progress details have been limited during the outbreak. The authority had planned to meet March 19, two days after Sisolak ordered nonessential businesses, including casinos, to close. The authority wasn’t prepared to conduct an online meeting on such short notice so it was canceled.

When board members gather, they’ll have plenty of reports to review. Four months worth of updates from the Raiders’ construction subsidiary are planned. Legal, accounting and staff services contracts need to be sorted out.

An item that will generate some fan appeal will be the authority’s consideration of the use of Allegiant Stadium for UNLV’s 2020 home football season and nonconference games for seasons through 2026. The board is required to approve that, but because some game contracts were signed before Allegiant was built, concessions were sought to get those games into the state-of-the-art building.

Both parties will learn Thursday how the schedule will be reconciled, with UNLV hoping to have games against California and Arizona State at Allegiant and a game with Louisiana Tech at Sam Boyd Stadium.

The Cal game already is locked in for Aug. 29, and UNLV is hopeful the Arizona State game would be played there Sept. 12.

Other topics on the agenda are even messier.

A suite-access policy for the authority will be discussed. Under terms of Senate Bill 1, the legislation that authorized state funding for a portion of the stadium’s construction the authority was to be given a luxury box for its use.

The draft of an eight-page suite access policy will be reviewed. It spells out conditions of use, including purposes for attending events. Among the listed conditions are for community purposes, including economic development, community support and civic fundraising.

The authority also will conduct a public hearing on its 2020-21 fiscal year budget, a requirement of all government entities.

The authority is expecting a steep revenue drop with hotel rooms closed since mid-March and room rates expected to be slow to return to high levels.

Prior to March, room tax revenue collections were ranging from $4 million to $5 million a month. In March, it dropped to about $2 million, and zeroes are on the horizon for April and May.

The 2020-21 budget is projecting room-tax revenue of nearly $18 million with interest on banked bond proceeds supplementing that.

More details on those financial strategies are expected to emerge Thursday.