While Raiders fans will not be able to attend a home game this season, they will get to view Allegiant Stadium.

Allegiant Stadium’s website is advertising tours of the building with a sign-up list for interested parties to be alerted when the tours are made available. The website touts the tours as a way to “go behind the scenes of our world-class stadium.”

Raiders owner Mark Davis, who announced Monday that fans wouldn’t be allowed at home games because of coronavirus concerns, said the tours are still planned to occur this year and should be available “soon.” He called them a great way to get an intimate look at the new crown jewel of the Las Vegas Valley.

“It might be the better way to get to know it,” Davis said.“Let them (fans) introduce themselves (to the stadium) and let the stadium introduce it to them, without it being on a game day when there are 65,000 people walking around.”

The stadium’s website gives no information on hours, cost or when the tours would kick off, but a job posting for a stadium tour guide says the tours will feature groups of up to 25 people.

The average price of an adult ticket for tours at three newer NFL stadiums — Mercedes-Benz Stadium in Atlanta, US Bank Stadium in Minneapolis, and Levi’s Stadium in Santa Clara, California — is around $23. Seniors, children and military are offered discounted rates at all three stadiums.

So even though fans might not be able to cheer on the Raiders or UNLV at the stadium this season, they can at least get inside and see what the recently completed Allegiant Stadium looks like, after watching the building’s progress from the outside over the past few years.

“You can do it in a more relaxed way and actually take the time to look at all the different features put into the stadium,” Davis said. 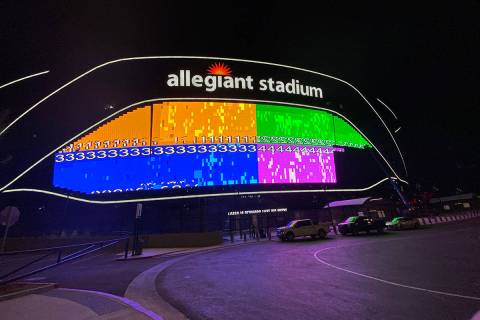