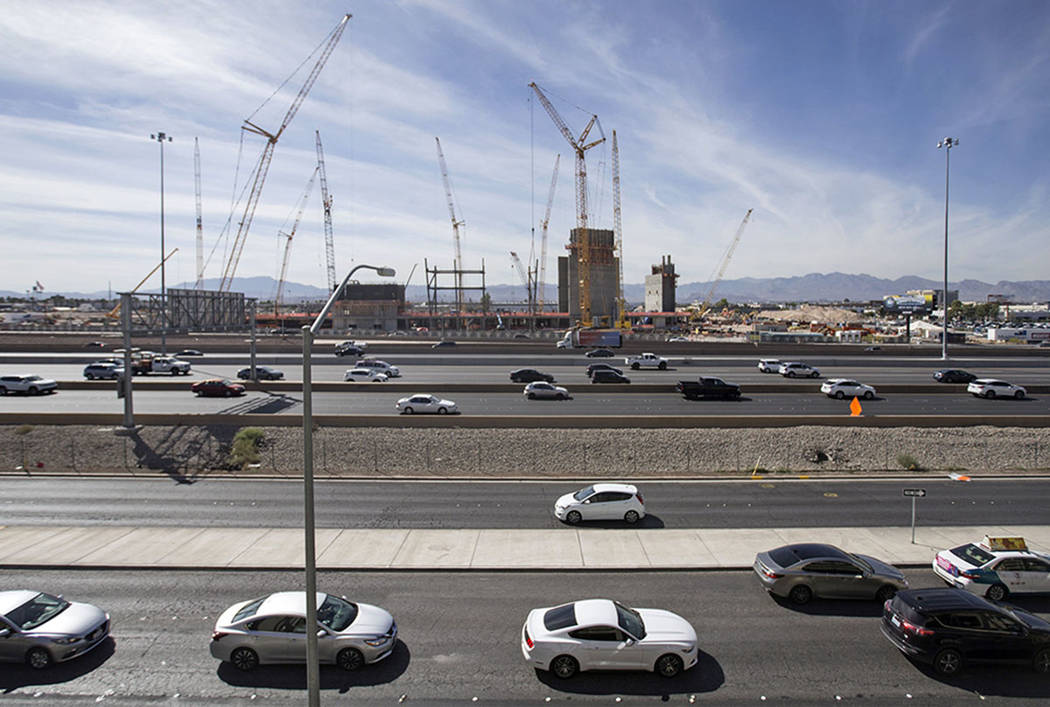 Stadium builders reached a critical stage in the construction of Las Vegas’ 65,000-seat, $1.8 billion indoor football stadium this week as they took the first step toward going vertical.

Contractors Mortenson Construction Co. and McCarthy Builders this week began installing the first of 52 truss columns, the steel beams that will frame the exterior wall of the stadium and ultimately hold up the high-strength translucent polymer roof.

“It’s a big milestone for us,” said Don Webb, chief operating officer of StadCo, the Oakland Raiders’ stadium construction subsidiary. “The installation will go slowly at first, but more efficiently as crews gain more experience” moving the columns into place.

Installing the truss columns is one of the first processes in which stadium construction will go vertical. The truss column assemblies, which weigh about 65 tons each, must be carefully placed so that the roof 220 feet above the ground can be properly assembled.

“In order for it to hold up the roof and hold up the enormous ring beam that ties those stainless steel cables that support the ETFE (ethylene tetrafluoroethylene, a fluorine-based polymer) roof, all of that is highly, highly precise,” Webb said.

The angle of the truss has to be precise as well. A placement at ground level that is a quarter-inch off could result in the top being a foot or more out of alignment. The work is further complicated by the expansion and contraction of the materials in the summer heat.

Webb said the trusses would be installed over the next two months with concrete pours of ramps and concourses occurring as the work progresses.

While construction moves forward, Clark County officials have begun looking at what the neighborhood around the stadium could look like.

Planners had their first public meeting Friday to develop a stadium district in the vicinity of the project. The district initially has been identified as a 1.23-square-mile zone bordered by Tropicana Avenue to the north, Interstate 15 to the east and railroad line right-of-ways to the south and west.

Robert Fielden of Rafi Architecture and Design is coordinating the effort with Clark County’s advanced planning department. The objective is to develop a community-driven employment and entertainment district plan to be presented in about a year to the Clark County Commission for consideration.

The plan will address land use, transportation and the anticipated evolution of the neighborhood surrounding the stadium.

In the inaugural meeting, about 50 people, mostly landholders from the neighborhood, heard a presentation from Fielden.

The roughly 787 acres in the proposed stadium district mostly have industrial and warehousing uses with a smattering of small retail outlets.