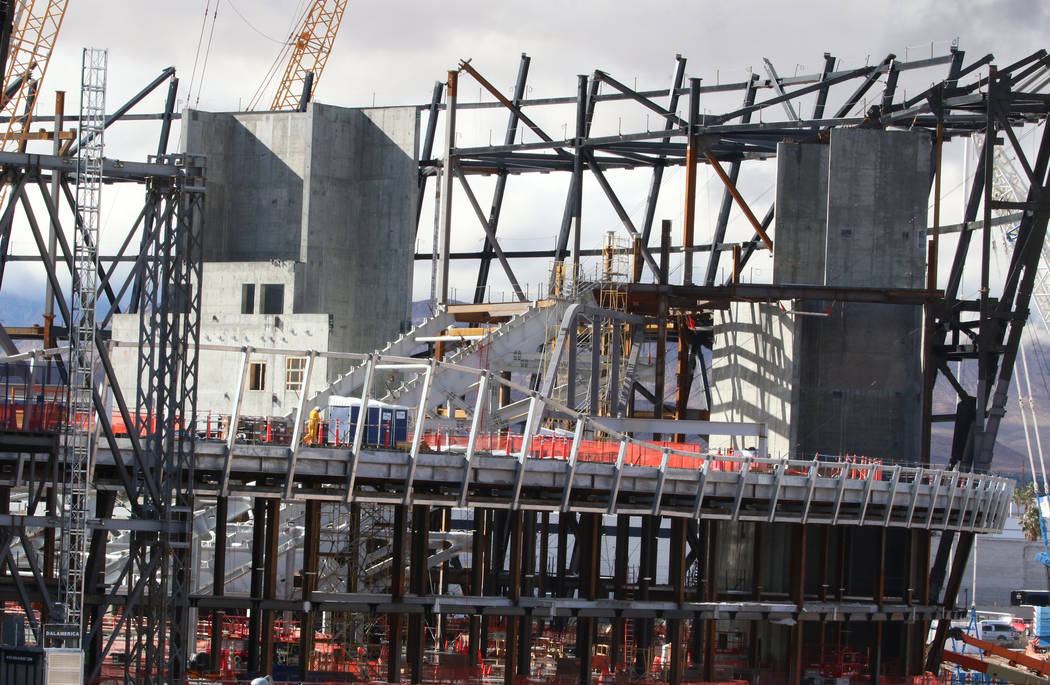 For a couple of hours Thursday, it sounded as if the Las Vegas Raiders would have their first preseason game in the new stadium Aug. 6, 2020.

A report issued to the Las Vegas Stadium Authority board of directors Thursday said substantial completion of the 65,000-seat indoor stadium was moved from July 31, 2020, to Aug. 4, 2020, and the venue’s first event would occur shortly thereafter. But Las Vegas Stadium Co. Chief Operating Officer Don Webb assured everyone nothing had changed with the completion date and that everything was still on schedule despite some recent snags in the delivery of steel components to the stadium site.

Webb said he was perplexed as to why the misinformation was reported.

“I was mystified when I found out they had said that because I’m quite familiar with the schedule. I sign off on any changes to that schedule, and the schedule still shows that we’ll have substantial completion on July 31,” Webb told the stadium board.

He theorized that one of the project’s oversight monitors, Jones Lang LaSalle, misinterpreted a graphic showing the milestone completion date in August on a scheduling chart.

“They also, by the way, in the course of that, somehow deduced that the first game would be played on Aug. 6,” Webb said. “I don’t know how on earth they would be able to discern that because we don’t even know what this year’s schedule is, let alone the schedule in 2020. So both of those are absolutely wrong. I’m here to say without any uncertainty that we’ll finish on July 31, not Aug. 4, and I’m fairly certain our first game won’t be on Aug. 6.”

Stadium Authority Chairman Steve Hill said the authority is “good with anywhere between July 31 and Aug. 4.”

An independent construction monitor hired by the authority said some steel work has not been completed as scheduled, but, for now, it doesn’t appear that will result in any construction delays.

“During our site visits, we observed that steel components that should have been completed have not yet been erected or detailed,” said a report from construction monitor Grand Canyon Development Partners.

It was noted that fabrication of certain pieces of steel have been late to the site, causing likely delays in work.

“This situation has been addressed with (the construction subsidiary) and the contractor. The contractor has taken actions to mitigate and reconcile the delay in steel erection to ensure an on-time project completion.”

Webb has said in the past that when components have been delayed in arriving to the site at Interstate 15 and Russell Road, contractors simply realign the schedule and complete something else with all the flexibility within the checklist of more than 18,000 tasks to complete.

“The contractor presented to us details of various options to accelerate and mitigate the current steel erection,” the Grand Canyon report said. “They have selected a schedule modification and are instituting the preferred method. As the contractor executes the schedule modifications and changes to work flow, we will continue to monitor the progress and advise accordingly. We expect to have an update at our next monthly meeting.”

The steel in question is sections of L-shaped roof trusses that will extend 40 feet atop existing exterior wall trusses on the stadium’s perimeter and hold the high-tech translucent roof in place. Two supercranes are being transported to the site that not only will be used to place the roof but speed up other steel work.

One of the steel subcontractors, Merrill Iron &Steel Inc. of Schofield, Wisconsin, has recorded a mechanic’s lien against general contractor Mortenson-McCarthy for nonpayment.

“Without editorializing too much, our steel fabricator who filed that lien has been paid every dollar that they’ve ever billed, so that’s very curious and unusual in my experience,” Webb said. “Typically, a lien is filed after you’ve exhausted other remedies to collect that which you are owned. And certainly to allege that you’re owed something that you haven’t even billed is rather creative.”

Mortenson-McCarthy issued a bond to assure payment to prevent further delays, and Webb expects it will prevail if the dispute escalates.